Small producers worry about losing market opportunity, as independent grocers see an opportunity to step up their local efforts. 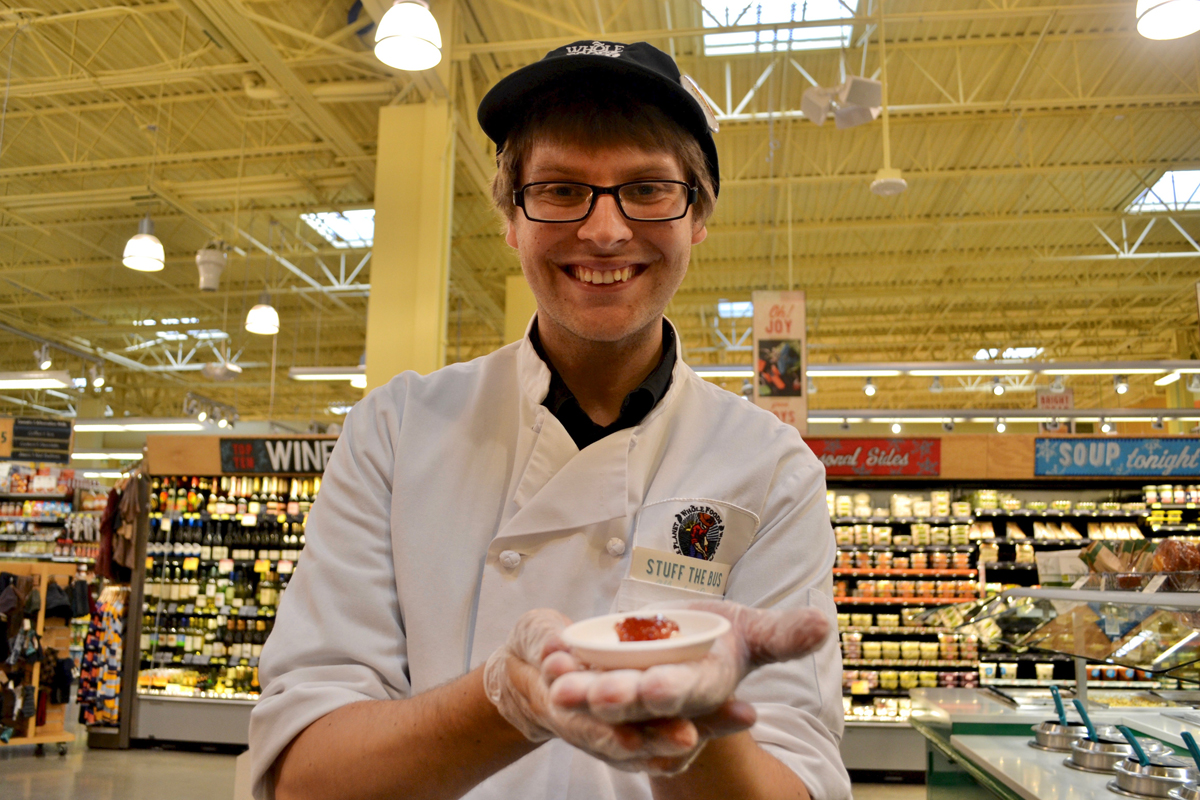 Six years ago, Jenna Huntsberger started selling handmade pies, quiches, and cookies, from a stall at a farmers’ market in Washington, D.C. Now, her baked goods company, Whisked!, relies on wholesale accounts for the bulk of her sales. In addition to selling at local markets and cafés, Huntsberger’s products have also been available in Whole Foods’ D.C. stores since 2015.

For years, Whole Foods has heavily marketed itself as a place to buy local food, and many small food businesses have landed their products on its shelves thanks to the retailer’s local buying policy. The store allows small producers to approach local and regional buying managers to get their products into stores; the buyers also recruit many indie food companies. Whole Foods also maintains an online portal where companies can sign up and connect with a category buyer.

Despite being smaller than many other national supermarket chains—Whole Foods claims 473 stores in North America and the U.K. compared to Kroger’s more than 2,790—it is a powerful force in the local food economy. Landing a Whole Foods account offer can offer exposure to an educated, consumer who might be willing to spend money on a new item. For producers, the relationship offers the Whole Foods stamp of approval—a sign that they comply with the company’s stricter-than-average sourcing policies.

Most customers seem to like it, too. “Whole Foods understands local stuff is what keeps them really interesting and fun and makes it more of an experience shopping there than going to Safeway or another bigger retailer,” Huntsberger said. 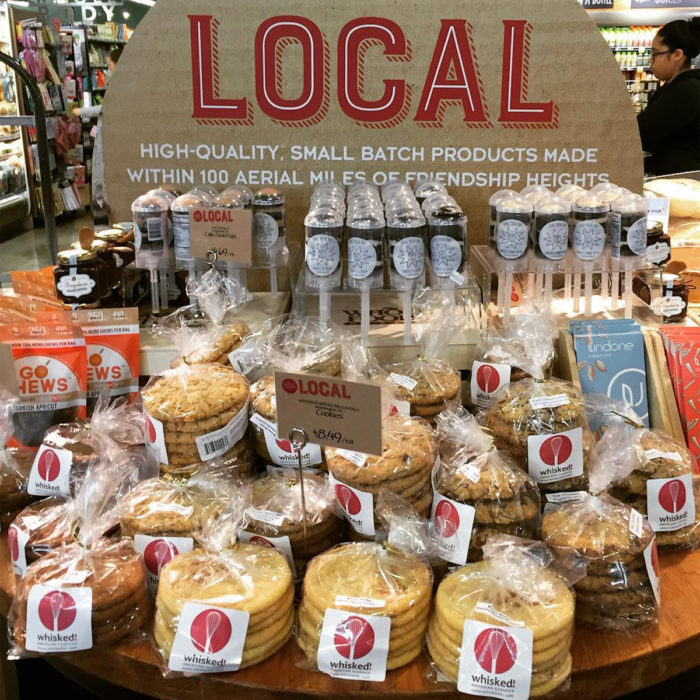 Since Amazon acquired Whole Foods for $13.7 billion in August, however, Huntsberger and other small, regional producers have been asking questions about how the online retail giant will incorporate the supermarket chain into its business. Recent moves to centralize the decisions about product assortment—as well as changes to producer participation in in-store promotions—have raised concerns about how local businesses will fit into the next-generation Whole Foods.

Whole Foods has yet to make public any concrete changes to their local buying program, and company representatives declined interview requests for this article. Instead it supplied this statement: “All Whole Foods Market stores will continue to sell local products, and our buyers remain committed to discovering and incubating local and innovative brands. Local suppliers and products are crucial to the success of the company.”

[Update: On January 5, The Washington Post reported that Whole Foods has begun requiring food producers to pay for in-store demo opportunities, and require some producers to discount their products sold in Whole Foods stores.]

Though the grocer has not made any explicit announcements about its plans, learning about Whole Foods’ work with local producers on its website has gotten increasingly difficult. As some sharp-eyed observers have noticed, “local” is now hard to find on the site—but “savings” and “new lower prices” are featured. And locating the retailer’s local program takes dedicated search or a visit to the site map.

Changes like these have some small producers worried about the future. “We’re just hoping, because we have strong sales, we will be fine,” said Huntsberger, who relies on the company for a significant portion of her sales. “It’s very much up in the air right now.”

While some worry that the “Amazonification” of Whole Foods could require local producers to compete against larger food companies with lower prices—potentially resulting in a dilution of authentic local products—others see opportunity for independent grocers to step up their efforts.

Distribution, Prices, and the Trouble with Scaling Up

While Amazon’s e-commerce model revolutionized shopping and logistics, it also fostered an expectation of low prices—and that doesn’t usually work well for small food producers. That’s according to Daniel Max, of Asheville, North Carolina-based Lightswitch Foods, which owns Kombucha Capital and Buchi Kombucha, and has products in 70 Whole Foods stores in the mid-Atlantic and Southeast regions. Small producers often don’t have the resources to move products around the country and can’t offer prices comparable to bigger brands.

Max and co-owner Zane Adams think that Whole Foods will likely move to a model that resembles that of other large grocery retailers—meaning larger scale, better margins, and lower prices, achieved by either choosing lesser-quality ingredients or centralizing operations. “It feels like that’s where it’s going to go,” said Adams. 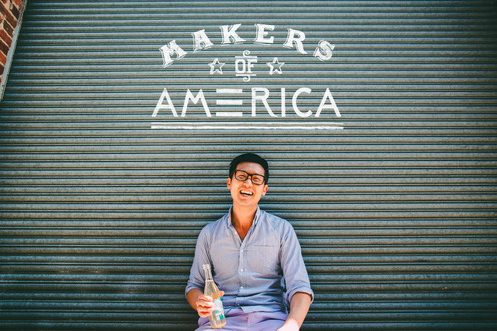 Both owners are wondering what this could mean for their company. “Will Whole Foods only want to work with companies that are [selling] $50 million and up, to the exclusion of craft brewers?” wondered Max.

Many small producers don’t have the capacity to expand outside their region, said Huntsberger, whose products are now in 13 Whole Foods stores. “There’s no way we could have gone from being in one store to 40-whatever stores in the mid-Atlantic region,” when hers was a new company, she said. “We would be struggling with that now, and we have a lot more room and resources.”

Small producers often see getting a purchase order from a big retailer as the holy grail, said Danielle Vogel, founder of Glen’s Garden Market, a grocer with two stores in D.C. that focuses on local foods. But they often don’t anticipate the stress that will put on their business in terms of production capabilities, delivery schedules, margins, and less-than-optimal plotting. They’ll also likely be amongst the most expensive product in their category.

“It’s a really rude awakening because oftentimes they’ve gone from a really productive, excited response at farmers’ markets to a very different scenario at a big grocery store that’s not a good advocate for their craft,” she said.

Which is why starting small—at Whole Foods or elsewhere—with the ability to scale up slowly, creates an on-ramp for local producers.

Yet even before the Amazon purchase, maintaining a product line at Whole Foods had its challenges for startups.

John and Angela Fout started Sohha Savory Yogurt in 2013. They began selling at farmers’ markets, were later scouted by Whole Foods, and began with 20 Whole Foods stores in Boston in 2015, followed by five in New York City. While they were approved for a handful of additional stores, they were still responsible for approaching individual buyers to get their product ordered. The experience differed with each location, with some welcoming them with open arms and others never ordering.

For a small company like theirs, said Angela, that process was difficult. “It’s all in the hands of the people stocking shelves. As a small business, we do everything, and we can’t waste so much time going begging [to] them,” she said. 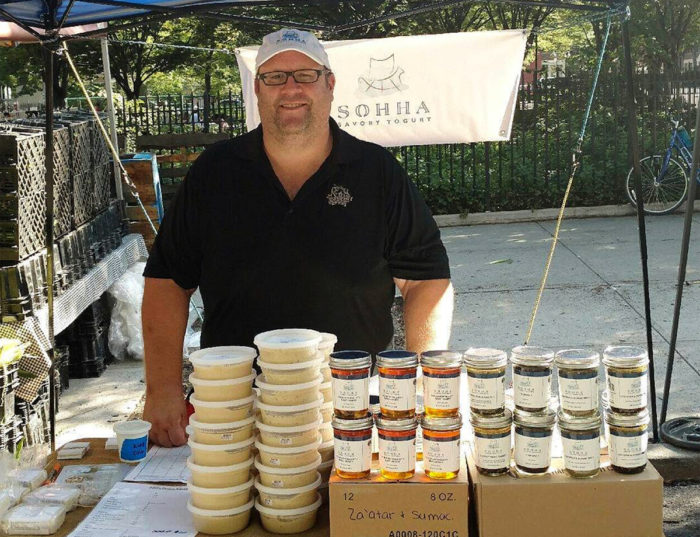 John Fout calls the Whole Foods system “a weird fiefdom,” wherein each store within a region operates somewhat independently. Even before the Amazon deal, he thinks pricing pressure often caused the company to hire less-experienced (i.e., less expensive) buyers who weren’t always knowledgeable about products. “The local forager for the region knew her job, but the in-store buyers were clueless,” he said. The Fouts are optimistic that the new ownership could present an opportunity to smooth out some of those kinks.

The bigger looming disruption is Amazon’s delivery model. “That could potentially crush the local model because fewer and fewer people [will] walk into a local store,” said John. That means fewer opportunities for producers to interact with and educate shoppers, he said. The Fouts said offering samples and talking with potential customers, in Whole Foods and elsewhere, has been a big factor in their brand’s growth.

In areas like the Northeast, where there’s a growing market for online shopping, however, the Amazon system could work in their favor—with caveats, John said. “If they can figure out a way to properly integrate things so [customers] have a great in-store experience, it could be good,” he said. “But that’s a hard to nut to crack.”

A recent poll by Reuters and Ipsos shows just how hard that nut is—as even the most dedicated digital shoppers have been found not to like buying groceries online. (Amazon recently ended its Amazon Fresh grocery delivery service in parts of nine states.)

As a public company, Amazon will be under some pressure to show that its acquisition was fiscally sound. Its 2017 third-quarter net sales included $1.3 billion from Whole Foods, according to the company’s recent sales report, but that didn’t stop its stock from taking a tumble. And its grocery competition includes behemoths Costco and Wal-Mart, plus German chain Aldi, which plans to open another 900 U.S. stores in the next five years, putting its total at 2,500 (assuming none close).

Additionally, Kroger announced an expansion of its local producer program in September. The company has a blended centralized and decentralized buying and merchandizing system, said company representative Kristal Howard. “Our customers love local,” she said.

Sarah Weiner, executive director of the Good Food Foundation, welcomes new outlets that help local producers reach a wider audience; three years ago, she and her team created the Good Food Merchants Collaborative. But she questions the ability of large retailers to operate outside the confines of their systems, which usually mean strict delivery schedules, lack of flexibility, and narrow margins.

“Even if Kroger makes shelf space for local, the really big structural changes would probably need to evolve to truly get to that goal,” said Weiner.

Weiner said that she can see Whole Foods becoming more like a large Costco-style retailer, but with some higher-end and local products. “I think that might be a hard transition for food crafters who are at a small-medium scale,” she said. “On the other hand, it’s going to make it much more clear to the public who’s really interested in quality food.”

With Amazon’s Whole Foods acquisition in the midst of a surge in interest in local foods, some independent grocery retailers are seeing a chance to re-establish their local bonafides. “This creates a real opportunity for small retailers to create and entrench a different product mix,” said Vogel of Glen’s Garden Market in D.C.

Glen’s is one of 22 independent groceries in the Good Food Merchants Collaborative, which is  planning to launch a cooperative buying program to expand smaller retailers’ buying power and hopes to offer more competitive prices for consumers.

“We would be essentially collectively displacing the buying power of a Whole Foods regional account,” said Vogel. “We become the safe space and landing pad for [producers] who no longer have that outlet, and simultaneously, we’re better for them and have better, stronger, more authentic relationships anyway.”

Small grocers are looking to local food to strengthen ties with consumers, said Travis van Horn, coordinator of communications and media relations at the National Grocers Association. Meanwhile, the trade association’s research shows that consumers also look to independent grocers for local food. “They generally have stronger ties to the communities they serve and a better finger on the pulse on what consumers need and want,” said van Horn.

Any changes Whole Foods or other major food retailers make to their local buying efforts highlight the need to have a larger conversation about values, said Lightswitch’s Adams. Small stores have an important role to play, he added.

“Independent stores can elevate this point of uncertainty, by saying, ‘We think local is important, and we think regional is really the future to how we secure our food system,’” said Adams.