The Cooking Class Bringing Better Health to the U.S-Mexico Border

Cooking for Salud! is graduating kitchenistas armed with cooking and nutrition skills. 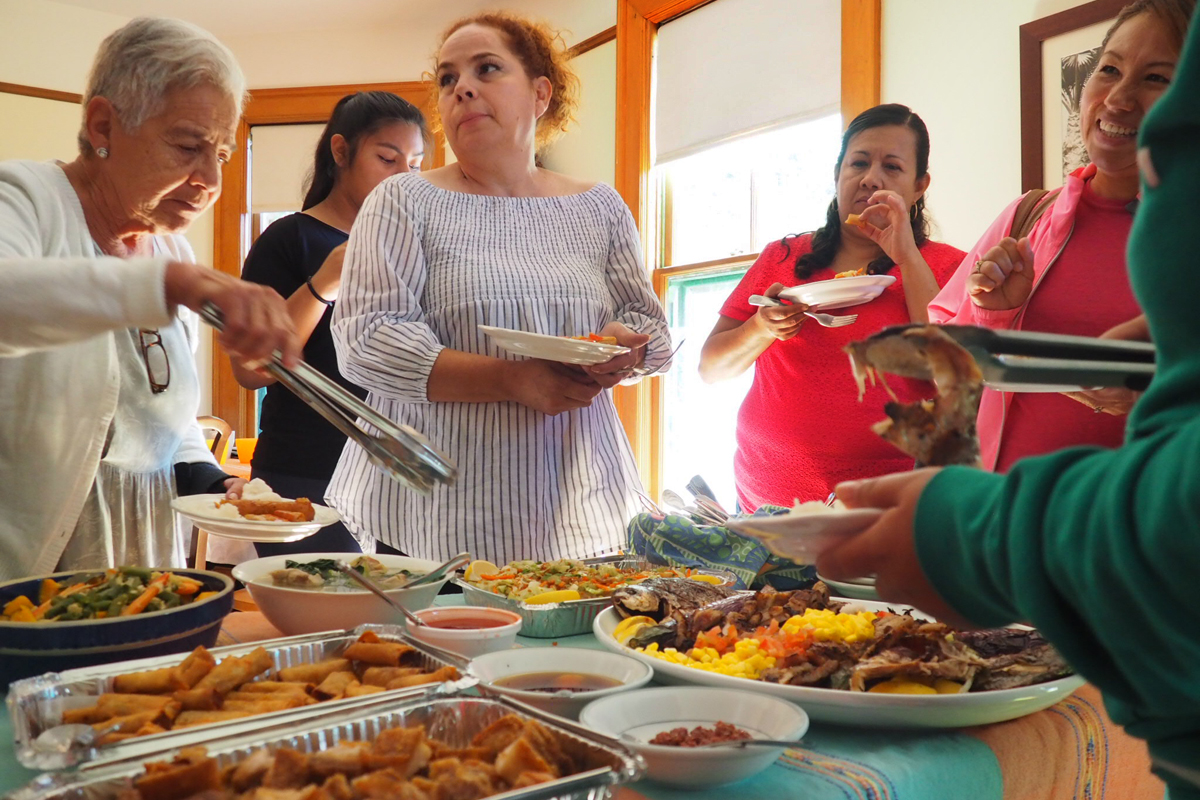 Olivewood Gardens and Learning Center catches most people by surprise. The large, idyllic, white Craftsman home sits atop a hill, standing out from the small, suburban ranch homes that surround it in the working-class town of National City, California, five miles south of downtown San Diego and 16 miles north of the U.S.-Mexico border.

The largely Latinx community is home to many Mexican-American families and recent immigrants. And it’s a fitting place for a center dedicated to helping Latinx families learn about health and wellness. Olivewood Gardens came about in 2008, after philanthropist and Walmart heiress Christy Walton gifted her nearly seven-acre former home and garden to the International Community Foundation (ICF) with the goal of facilitating healthy civic engagement in the San Diego-Baja California border region. 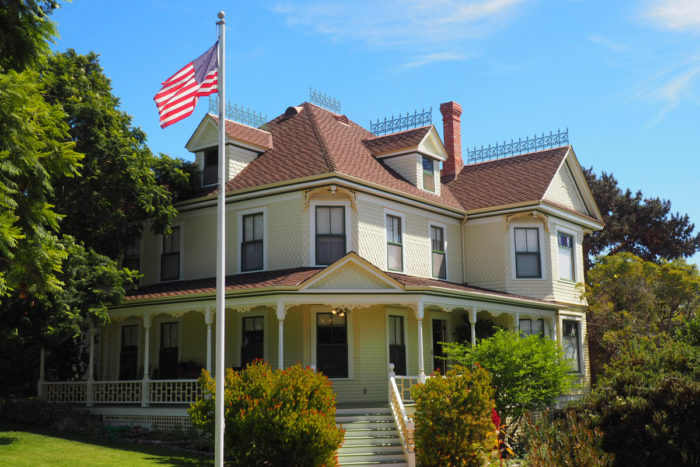 For a growing number of National City families, however, Olivewood Gardens is where they learned how to cook healthy meals—and help their communities do the same.

“I feel empowered,” says Rocina Lizarraga, who is originally from Mazatlán, Mexico, and who learned to completely retool her cooking habits at Olivewood Gardens. “I consider myself an activist in the community thanks to what I learned at Olivewood,” she adds.

Since 2013, the former Walton property has been home to Cooking for Salud!, an eight-week cooking course designed to teach National City parents how to cook nutritional meals for their families, and how to make healthy changes at home that will have positive short- and long-term health effects. Since then, the program has gradated 147 participants, whom they call kitchenistas—most of whom are Latina, and many of whom return to teach future generations of the course.

Cherianne Kestner, Olivewood Gardens’ interim assistant director of programs and personnel, explained that the selection process for each generation of kitchenistas prioritizes National City residents, parents whose children attend National City elementary schools, and those who have been diagnosed with a chronic, diet-related health condition.

So far, the Cooking for Salud! participants have all been women, mostly of Mexican descent—although the organization has hosted “husbands’ classes” to better integrate family members into the program. In order to be considered a kitchenista, a participant is required to attend a seven-week course that lasts three hours a session, spend time in the garden, journal, share experiences, learn cooking techniques from visiting chefs and try their hand at cooking the dishes themselves. The eighth session is a family class, where the women invite their partners and children into the kitchen with them as they share their newfound skills. 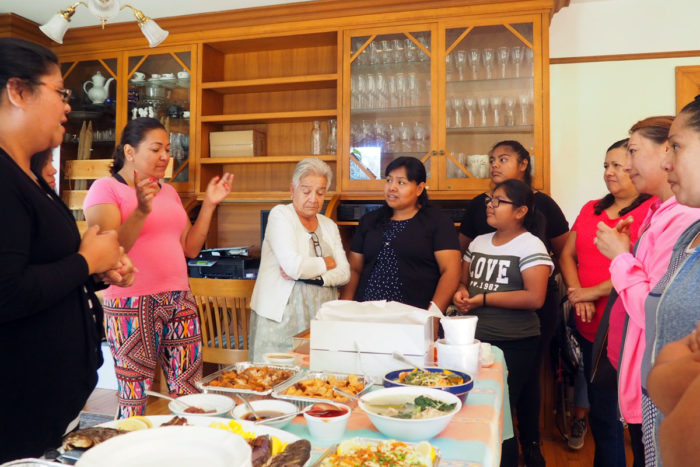 Cooking for Salud! graduates try Filipino food ahead of the launch of its Filipino cooking program.

The years-long waiting list for the program speaks to the need for this type of program in National City. Cooking for Salud! tracks other metrics of success, including pre- and post-program surveys about knowledge, behaviors, and attitudes around food and healthy living as well as in-depth interviews with past participants about the program’s impacts. Through a new partnership with Operation Samahan, a San Diego-based network of clinics serving low-income Latinx and Filipino families, they are able to track medical data for patients of their clinic to measure the program’s impacts on long-term health outcomes.

“Our program is designed to allow for ongoing opportunities to keep graduates engaged,” Kestner says. Of the 147 alumni, 75 are still active, continuing to visit Olivewood Gardens, teach cooking and fitness classes at the center, and acting as community activists on the organization’s behalf.

Kestner says that Cooking for Salud! participants join for a variety of reasons, whether to learn new cooking techniques, lose weight, or improve the health of a pre-diabetic child. “Regardless of the reason,” she says, “most participants discovered through the course that we are all connected in our health journey. To desire and strive for personal health, it is almost impossible not to affect those around us.” 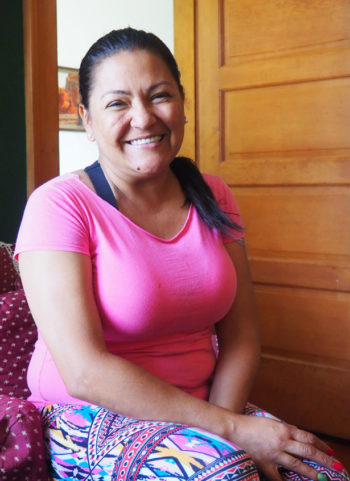 Lizarraga, who was on the Cooking for Salud! waiting list for two years before finally joining the ninth generation of students, has seen the effects of diet-related illness firsthand. “My mom died from poorly managed diabetes. Two of my kids are obese,” she says. Before, choosing and preparing food for her family was an ongoing challenge; now she says, “I know to make my own chicken nuggets instead of going to McDonald’s. They taught me how to read labels.”

Since joining Cooking for Salud!, Lizarraga has limited her family’s soda intake to once or twice a month, down from every day. She makes agua fresca only occasionally now, and when she does she uses a pinch of brown sugar instead of loads of refined sugar. She no longer uses white flour or deep-fries her food, and she tries to incorporate vegetables into meals whenever she can. She plans to put her newfound vegetable-grilling skills to work at her husband’s upcoming birthday party, where she has traditionally served carne asada. Lizarraga is looking forward to seeing what her extended family and friends have to say about the new menu.

Bertha Leyva, a graduate of the first generation at Cooking for Salud! who is originally from Mexico City, echoes many of the same impacts. She was introduced to the program’s first class through a local activist who went door-to-door giving personal nutrition instruction. Since becoming a kitchenista, she has helped teach cooking classes, given lectures, visited schools, and hosted bi-weekly fundraisers at her house, many of which feature vegetarian Mexican dishes. 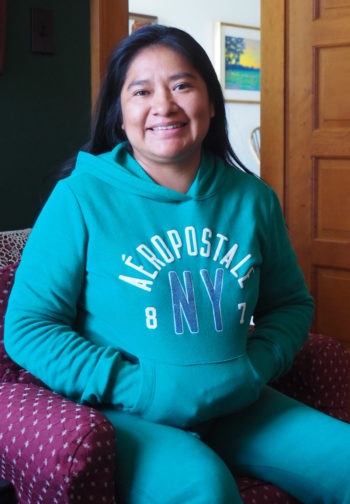 “I don’t have a lot of close family here, but I always tell neighbors, ‘Don’t buy this!’” Leyva says. “And I notice they change in how they use fast and convenient foods. They’ve seen and experienced how I cook differently and I’ve made some small changes in their minds.” She adds that she has brought many friends to Olivewood who eventually became kitchenistas themselves.

Olivewood Gardens is still aligned with ICF, and also receives grants from the San Diego Foundation and other independent donors. Cooking for Salud! is about to train its 11th generation of kitchenistas, which for the first time is geared toward National City’s growing Filipino community. Like the Spanish-language program, it is expected to feature lessons about roasting vegetables, re-imagining celebration dishes, and retooling everyday Filipino classics.

Along with Lizarraga, Leyva also considers herself an activist. Both continue to bring their work into their community, along with their fellow kitchenistas. One Cooking for Salud! graduate recently opened the only organic restaurant in National City, armed with recipes from her time spent at Olivewood Gardens. Called De Passion Fruit, it languished in red tape for over a year while waiting permitting, but the kitchenistas lobbied City Hall until the founder were able to get all the necessary permits approved. Whether at City Hall or at the school board, Leyva and Lizarraga aren’t shy about getting involved as much as is necessary to get results.

“Food is absolutely political,” Lizarraga says. “We have to fight every step of the way. As a community member, I can see that the whole food system is [shaped] by profit, but we fight. We face the mayor. We are here for a purpose. We are united.” 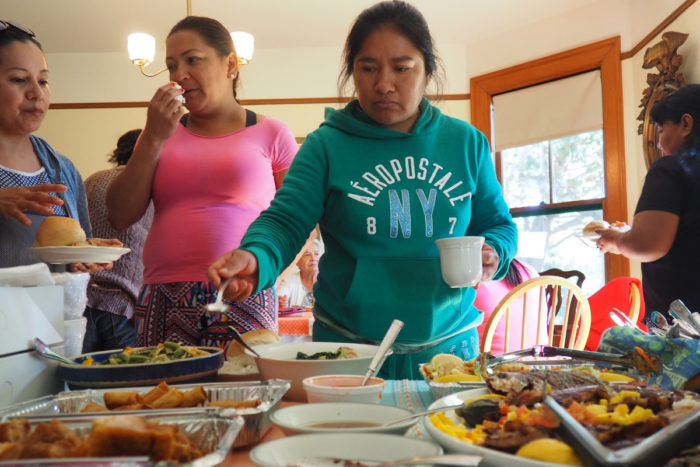 Jackie is an award-winning freelance food, drink, travel and design writer. Originally from New York, she now lives in San Diego, where she's currently enjoying living and writing by the beach. Her work has appeared on the web and in print at AFAR, Roads & Kingdoms, New Worlder, Life & Thyme, Well+Good, San Diego Magazine, The Independent, Munchies (VICE), KCET, Atlas Obscura, and others. Read more >