Is Capitalism a Barrier to Food Justice? | Civil Eats

Is Capitalism a Barrier to Food Justice? 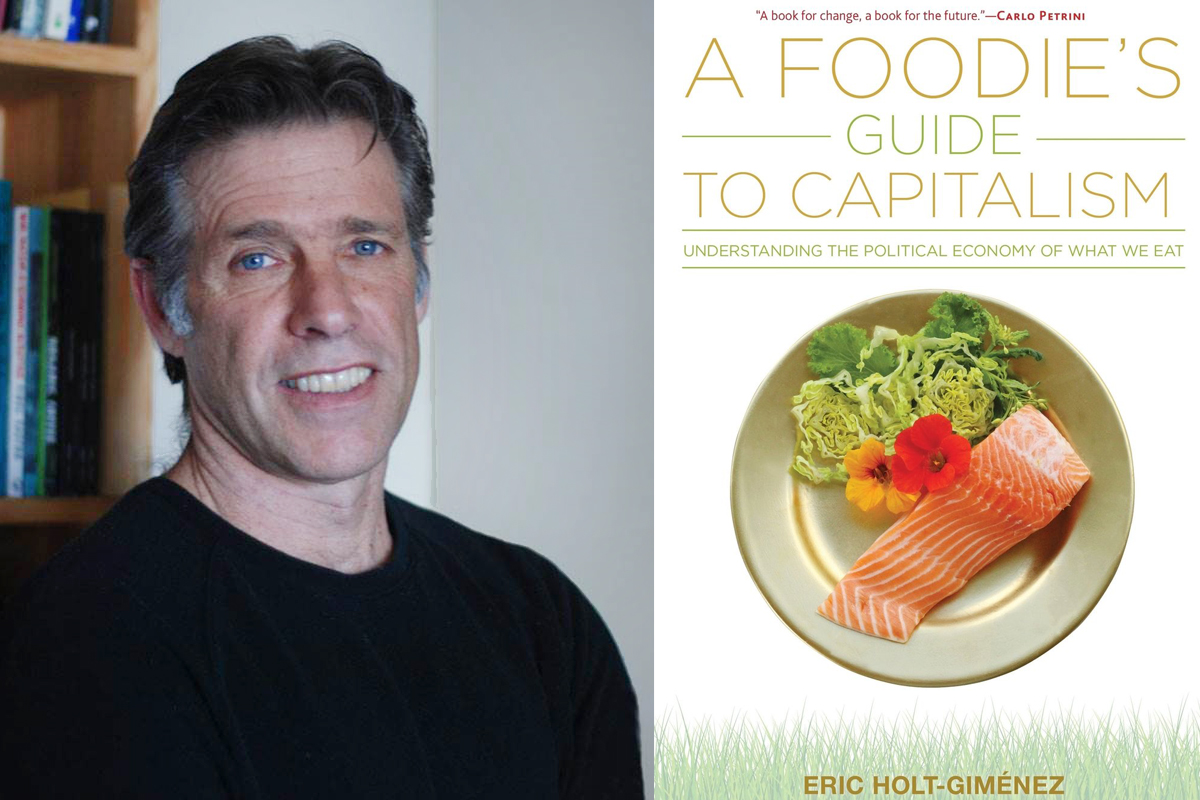 No consumer, farmer, or activist participates in the food system without also participating in capitalism. To Eric Holt-Giménez, the director of Food First, this is a basic truth that’s too often overlooked in the struggle to change our broken food system. In his new book, A Foodie’s Guide to Capitalism, Holt-Giménez delineates the basic truths of capitalism and how they are connected to the history of our food system. Part history book, part practical guide, the book links many of the injustices associated with food to other inequities, arguing that capitalism fuels and is fueled by oppression. If we better understand “the rudiments of how capitalism operates,” he explains, “we can better grasp why our food system is the way it is, and how we can change it.”

Civil Eats spoke with Holt-Giménez recently about the book, the current food crisis, and the future of food activism.

You’ve been working in food justice for decades. How did your vision for A Foodie’s Guide develop?

I’ve been giving a lot of university lectures and participating in community dialogue over the last 10 years in North America, Latin America, and Europe. I realized that many food activists—mostly in the U.S.—had no analysis of the root causes of the problems they were dealing with. Many people were genuinely surprised when I pointed out that we had a capitalist food system, and that it was going to act the way capitalism acted.

Basically, we get little to no training about how capitalism works while we are in school, and the system is so ubiquitous, it’s taken as the natural state of things. Until Occupy Wall Street, it was awkward to even mention the word capitalism. I could see that this lack of clarity was holding back the food movement, politically. So I decided to tell the story of how capitalism and our food system co-evolved. I also provide some very basic concepts in political economy (use and exchange value, surplus value, the agrarian question, socially necessary labor time, land rent, parity, etc.) and show how they can be used to understand why the food system does what it does.

Why do we need this book now?

Our food system is in crisis because capitalism is in crisis and is passing off the worst effects—or “externalities”—of the crisis onto society and the environment. Global warming, extreme inequality, the rise of fascism, the persistence of hunger, and the spread of diet-related diseases are all reflections of a profound systemic crisis. We can’t change the food system in isolation from the capitalist system because they are systemically and historically connected. Just as the food system is a major contributor of greenhouse gases, for example, agriculture is one of the sectors that suffers most from global warming.

You argue that food activists who think they can change the food system in isolation, without addressing the larger system of capitalism will be ineffective. But small-scale efforts are how so many activists conceive of their day-to-day work. Can you give examples of how we might address the larger system with small-scale projects?

There are no magic small-scale projects that bring about whole-system transformation in and of themselves. Community food activists need to keep on doing all the great work they do on the ground but they have to link this work politically to social movements for transformation. We have to rebuild both the commons and the public sphere. We need to get the practices and the politics right. Right now the global market makes our decisions for us—which just means the big corporations with the most market power will continue to put profits before people and before the environment. We need the concerted power of social movements to change that. Otherwise, we can be assured that whenever our hopeful alternatives really start working for us, they will be co-opted by capitalism.

The recent decision by the U.S. [Department of Agriculture’s National Organic Standards Board] to recommend allowing [some] hydroponics [producers to continue receiving] organic certification is an example of this; industrial organics had been going down this road for a while.

What do you see as the first steps activists can take to link their work politically to social change?

We need to reconstruct both the public sphere—decimated after 30 years of neoliberalism—and need to recognize, repurpose, and grow the practice of “commoning” in the food system. The public sphere is that area of social interaction where debate and decisions are made regarding the economy, public services, the shared environment and daily life that are not simply determined by the priorities of “the market.” The public sphere for most of us has disappeared under the power of the global market and the bottom line that appear to be making the decisions regarding everything from the dominance of processed foods to global warming. I say “appear” because the corporate public sphere is alive and well. One finds it at the World Economic Forum in Davos, or in the World Bank, where the .01 percent bargain with the fate of world’s people and resources. So not any public sphere will do.

We need to reconstruct a critical and radical public sphere in which values like equity and respect for the Earth guide the decision-making process of the majorities rather than one that ensures the financial interests of the elites. We see this happening in things as simple as local food policy councils and as complex as the global coalitions for climate justice. Another example of a critical (and radical) public sphere were the mobilizations at Standing Rock led by indigenous water protectors.

Commoning refers to all those social interactions of collaboration that are determined by the moral economy rather than the market. Traditionally, these social interactions were actually grounded by a physical commons, like pasture, forests or fishing grounds that were governed by very strict rules of cooperation. But if we think about it, even the formal, capitalist market today functions in great part because we cooperate to make it work, without any financial remuneration.

Commoning—as much or more as capital—makes the food system work. We need to repurpose our forms of cooperation to strengthen our communities and our social and political networks rather than the capitalist food system. This can also be as simple as a Community Supported Agriculture agreement between a service worker’s union and a local farmer’s guild, to something global like the movement-based fair trade markets. These kind of movement activities both protest against the current food regime and actively construct the alternative. The integration of activism with livelihoods is the key to successful social movements because it creates the sustained social pressure that produces political will—and that’s what creates social change.

How can an average consumer help contribute to the transformation of the food system?

It is important to eat according to one’s values—organic, fair trade, local, etc.—but conscious consumption—essentially a market-based approach to transforming capitalism—comes up short because sooner or later capitalism ends up absorbing these products into the system. Conscious consumption needs to be paired with activist citizenship to avoid being divested of its political power.

You write that our food system was built on exploitation and oppression. How does this play out in 2017?

The people who are the hungriest, most food insecure, and most affected by diet-related disease in the world—including the United States—are food and farm workers. Most of these hungry people are women and people of color. During the 2008 food crisis, one to two more baby boys per 1,000 births died who would have otherwise lived. For girls, seven to eight baby girls per 1000 births died who otherwise would have lived. This seems to me to be ample evidence that the global food system—built on patriarchy, racism and class exploitation—has not changed its structures.

Secretary of Agriculture Sonny Perdue is tightly invested in the industry he’s regulating. How do his priorities differ from your vision for the food system?

Perdue wants to help monopoly agrifoods corporations squeeze profits out of farmers and consumers. Food is simply a means to that end. He isn’t “regulating” anything (unless it is criminalizing dissent or protecting CAFOs from public scrutiny). We can expect the further disappearance of mid-sized family farms and further corporate concentration of our food system under this administration, as well as the increased “financialization” of our farmland as farm mortgages are traded and sold on the global market. We can expect the further hollowing out of the U.S. heartland and a worsening of the social strife, food insecurity, and opioid addiction currently devastating the countryside. We need to break the corporate stranglehold on our food; put people back on the land, invest in rural communities and break up the big monopolies and stop speculating with our farmland and our food.

What’s the biggest myth about food policy as it relates to the economy?

The biggest myth is that hunger and food security are the result of food scarcity. We produce one and a half times more than enough food to feed every man, woman, and child on the planet. People go hungry because they are poor and don’t have enough money to buy the food being produced. Calls to “double food production” are half a century old. Instead of ending hunger they have indebted farmers who borrow money to buy newer, bigger, and more expensive inputs, only to see prices bottom out because of a glut of food on the market.

It’s not scarcity but overproduction that is driving hunger and getting the agrifoods corporations and their shareholders very rich. Of the billion or so hungry people in the world, most are the poor farmers who actually produce 70 percent of the world’s food, but they can’t even afford to feed themselves. They don’t need expensive inputs, they need more land, access to water, and to health, education, and welfare services.