This monthly party builds community around the soup pot and raises money for social justice groups. 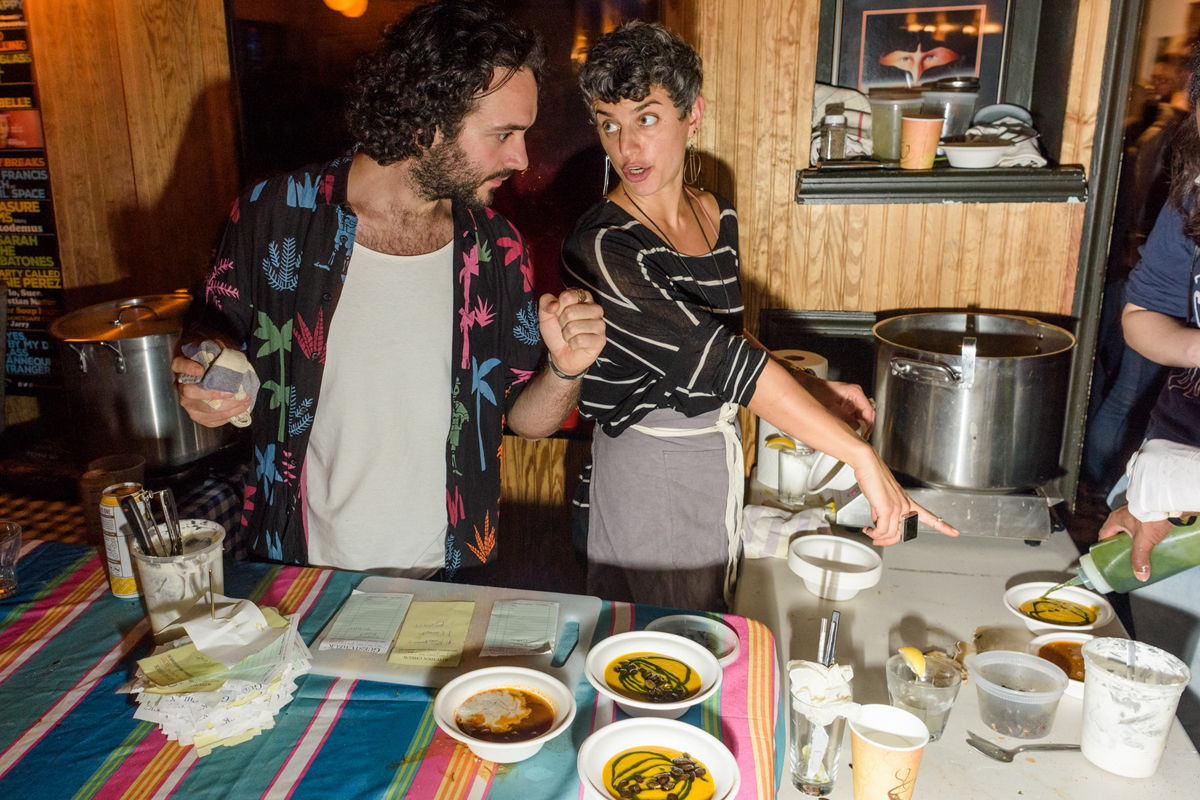 It’s a cold November night in Brooklyn, and more than 200 people, nearly all of them queer, are gathered at C’mon Everybody, a local event space. A crowd mingles outside the entrance, catching some fresh air. Inside, there’s barely room to move. The narrow space is filled to capacity. A DJ is rocking the crowd with a violin cover of an old Ne-Yo song. People are dancing, talking with friends old and new … and eating soup. Lots and lots of soup.

In fact, the line for soup winds around the room. Guest chefs Kristopher Edelen, Ora Wise, and Lukas Volger stand behind a row of massive pots, serving the hungry crowd. Volger has made a squash chowder with greens, quinoa, and whipped feta. Volger is the co-founder and editor-in-chief of Jarry Magazine, which explores the intersection between food and queer culture, and is a natural fit for what has become a monthly tradition in Brooklyn: Queer Soup Night. 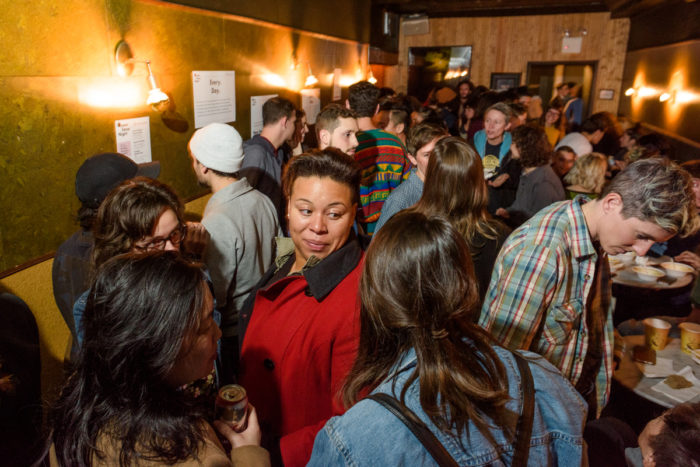 The crowd at C’mon Everybody. (Photo credit: Fernando Sandoval.)

One attendee, who has finally gotten her bowl and is happily squeezed into a corner table, heard about the party from her neighbor. “It feels like a really cozy queer community event. We’re all connecting in a way that’s about sustaining our bodies and our hearts,” she said.

Queer Soup Night is the creation of Liz Alpern, a Jewish lesbian living in Brooklyn and the author of The Gefilte Manifesto, an Ashkenazi Jewish cookbook. After Donald Trump was elected president, Alpern—like many others in the food world and the nation as a whole—felt immobilized. She sat in on organizing meetings, went to protests, and followed her friends to resistance-bent book groups. But she didn’t feel comfortable in any of the organizing groups she joined.

“When you’re totally overwhelmed,” Alpern said, “and don’t know what to do, you do what you do best.” And what she has always done best is cook. So one day last winter, Alpern put a big pot of soup on the stove and headed off to a political rally in Manhattan. When she got home, she invited over some friends who had been protesting the just-instituted travel ban all day. They arrived at Alpern’s apartment with a crowd of hungry strangers in tow.

“They were at JFK protesting,” Alpern recalled, “and that was how random people heard about it—they were out on the streets.” At that moment, Alpern found her place in the resistance–she was going to feed the troops. And Queer Soup Night was born. 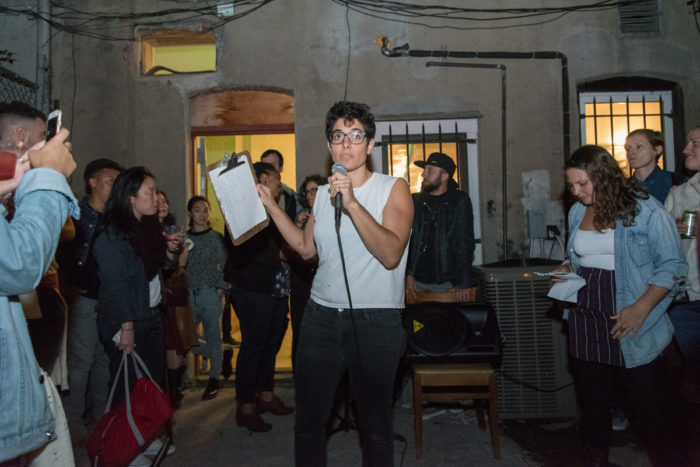 It’s now a monthly event that features guest chefs and raises money for social justice organizations. The suggested donation for a hearty bowl of soup and a slice of bread is $10. Every dollar raised during the once-a-month party goes to an organization in need of support. “We want to give to causes that the queer community cares about and connects with,” Alpern explains. “But we never thought we’d only give money to queer causes.” Since the first Soup Night, funds have been donated to a youth-run community garden, a bail fund, and immigration rights organizations.

November’s soup party raised funds for the New Sanctuary Coalition, an organization that pairs volunteers with immigrants who have been identified for possible deportation. These volunteers accompany the immigrants to court dates, provide emotional support, and keep families informed.

Sarah Gozalo, who runs the accompaniment program for the Coalition, taps on a microphone midway through the night to say a few words. It takes several minutes for the noise in the room to die down. “What I want to say is this administration has directly targeted immigrants,” says Gozalo. “But really, it’s not only the immigrant community that has been attacked. And so it’s time for all of us to stand tall—not just for immigrants, but our LGBTQ community, women, people of color. Everyone.” She raises her fist in the air. “We are all united and when we unite we are unstoppable.” The room explodes in applause.

“One of the connective threads with these supper clubs is that people want to do something,” says Volger, who included stories of several queer supper clubs—including Queer Soup Night—in the latest issue of Jarry Magazine. “Liz wants to raise money. Some of them are building community in rural areas. Others are just trying to connect across different divides. This has all happened since the election.” 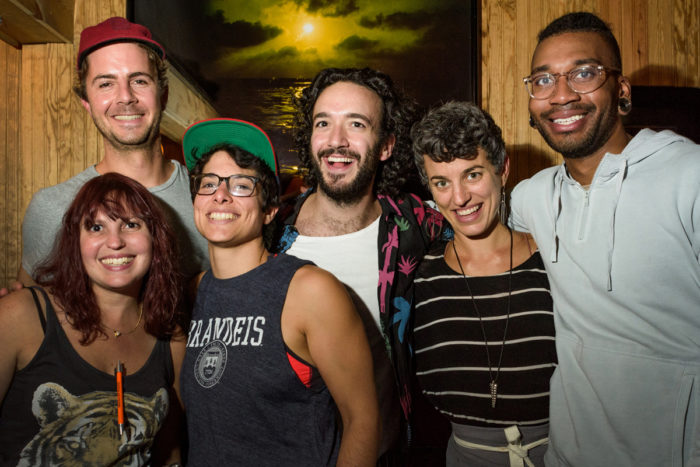 By the end of the night, the cooks are exhausted and the pots are all empty. More than $1,500 has been raised for the Coalition and its work.

On these nights, friends and strangers break into political debate, react with outrage and disbelief to new and outrageous tweets, and plan for future organizing events—all over warm bowls of soup. But as electronic music reverberates through the room, conversation also turn to lighter topics: The merit of freshly ground spices, the quickly approaching New York winter and how to properly layer sweaters, how to best navigate the subway system.

To Alpern, it’s important that attendees can relax and decompress, regardless of the political climate outside this building. “We need to value taking care of ourselves and coming together,” she says. “Not just at meetings, but in spaces that feel fun and lively and inspiring. When you eat, that’s what happens.”

Queer Soup Night has rapidly outgrown Alpern’s apartment, and it takes a lot more soup to feed the hungry crowd now. Otherwise, the atmosphere has not changed much. It is still a family affair; still a freshly made, warm meal for hungry protesters and activists. Alpern, describing her event, always says, “Everyone is welcome at this party.” And as this message reaches more people, Alpern knows she’ll have to rethink some elements of Queer Soup Night to accommodate a growing crowd. 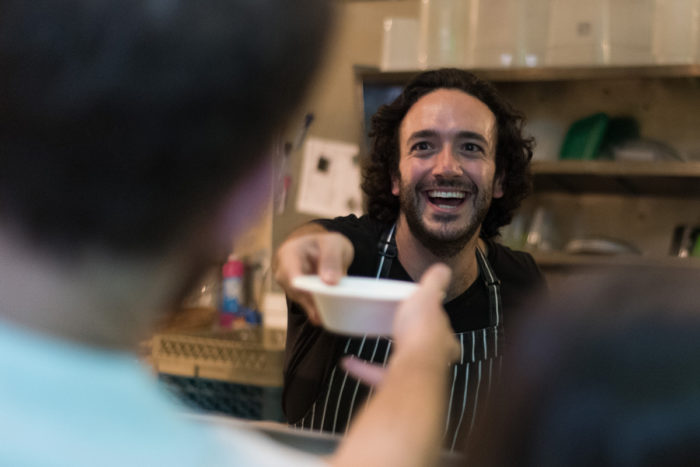 Even as the party grows, Queer Soup Night is about more than dancing and eating. This is a chance to organize, to plan, to resist.

“I wanted to create a space around food and around gathering that doesn’t cost a lot of money,” Alpern reflects as she heaves a huge soup pot into the back of her car. “A space where we could organize, if that’s what we needed to do. A space where we could run into each other, because that is one of the fundamental principals of community. You don’t have to be like ‘are you going to Queer Soup Night?’ You just go to Queer Soup Night.”