Grain Mills Can Be Cornerstones of Local Food Economies

Getting heritage grains from farms to market means rebuilding the mills that once supported every community. 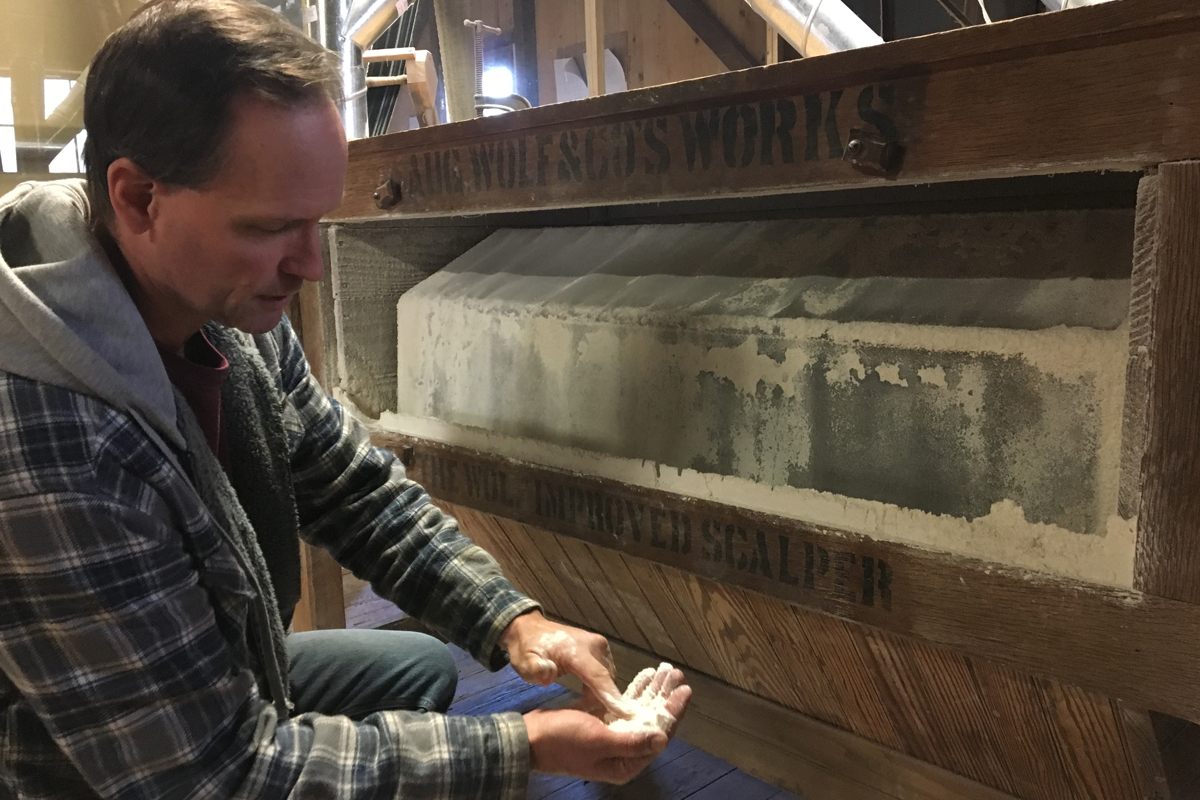 Mark Fischer surveys the boxes of organic Redeemer wheat sitting on the worn wood floorboards of his Castle Valley Mill, awaiting pickup. Like most of the grains Fischer cleans and grinds here on the banks of Southeastern Pennsylvania’s Neshaminy Creek, this varietal was grown nearby, on a relatively small scale. Hyper-local farm-to-mill grain production of the sort Fischer engages in was common around here a century ago; now, operations like Castle Valley are a rarity.

The image of wheat—and the honest miller, like Fischer, who grinds it—is a longstanding symbol of the essential role that grains have played in the human diet over millennia. But “this idea of the simplicity of wheat in agriculture is such a falsehood,” says June Russell. “In fact, it’s endlessly complicated.”

Russell has been working to reintroduce local grains in the Northeast, an area that hasn’t grown such crops for human consumption since early in the 20th Century. With the Greenmarket Regional Grains Project (GRGP), which she spearheads from New York, she’s using grains—including ancient and heritage wheats like einkorn, emmer, and spelt—to help create a more sustainable food system. Many of these are climate-resilient and they make for good, soil-regenerating rotation crops. After a decade of effort, 65,000 pounds of local flour are now being used every month by area chefs and bakers who partner with GRGP, produced from crops grown by about 40 farmers.

Having first counseled farmers on what to plant for consumers increasingly interested in organic, landrace, and heritage grains, Russell then had to locate mills to clean, grind, and sell these products. But the blunt reality is that, until very recently, what Russell calls this “essential infrastructure” was almost completely lacking in the region. Almost all of the small mills became defunct when grain farming moved to the Midwest over 100 years ago, and massive commodity mills sprang up around it to bring us an endless supply of enriched white flour.

In order for GRGP to help bring grains back to Pennsylvania, New Jersey, New York, Connecticut, Massachusetts, New Hampshire, and Vermont, Russell had to track down the very few aficionados who were running small-scale mills, or find people who were willing to start them.

“This used to be the foundation of our food system,” says Russell. And now, it’s coming alive again, as she has slowly drawn together nine mills for the farmers with whom she works. No two of these mills clean, grind, or sell in quite the same way. Elizabeth Dyck, an agronomist whose Organic Growers’ Research and Information-Sharing Network (OGRIN) has been a grant partner with GRGP, says, “Each mill [is successful] for very particular reasons that have to do with where they’re located and what resources they have on hand.” 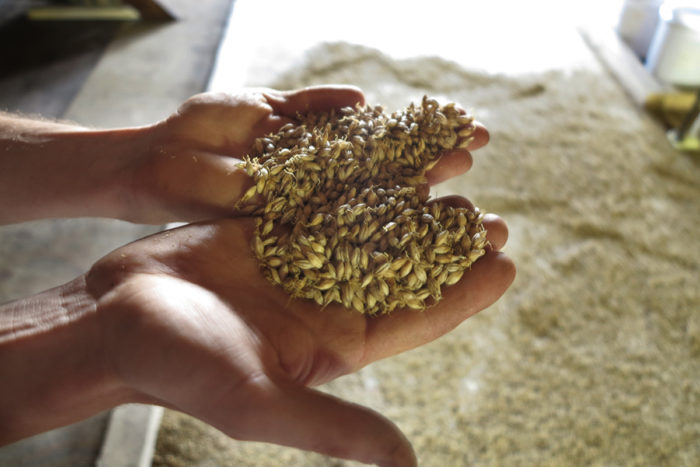 That means each mill has had to formulate its own unique relationships with farmers, chefs, bakers, wholesalers, retail customers, and GRGP. They’ve also had to learn the rudiments of milling, whether using old-fashioned millstones or more modern roller techniques. Generations-worth of this highly specialized knowledge—once passed down orally through families—died out long ago.

Fischer’s mill in Doylestown, Pennsylvania, was built in the early 18th century when small mills were still essential to local commerce. It had been in his family since the 1940s, but sitting idle since the 1920s. Fischer and his wife, Frances, bought it in 1997 and spent 14 years piecing its various disassembled vintage parts back together. Once the machines were operational, Fischer, who trained as an electrical engineer, began using them to grind cornmeal and soft wheat for a farmer friend who’d been attending OGRIN grain-growing seminars. “I soaked up that information and then said, what do we have, and what else can we do?” says Fischer. He and Frances now run the mill as their full-time business.

Part of the “what else” has been convincing regional growers to plant specialty grains on his behalf; millers like Fischer are essentially middlemen bridging the gap between farmers and consumers. At first, non-GMO dent corn was the likeliest choice because anything Fischer could not pass on to chefs he could sell to organic chicken farmers as feed. Castle Valley now processes eight specialty grains that fetch a higher price than conventional grains among a growing number of high-end chefs, including Philadelphia’s Marc Vetri, who are excited to experiment with them.

“When we got started, we’d have chefs who’d come back to us and say, ‘That was the best…whatever…I’ve ever made,’” says Fischer. He adds that increased demand for stone-ground fresh grains “is driven by culinary experts who recognize that wheat can be as interesting as beef.”

Russell says there’s mounting enthusiasm among individual customers, too. This is especially true at the Inwood greenmarket in Northern Manhattan, where GRGP’s grain stand does brisk sales—despite higher-than-average prices. A one-pound bag of cracked oats, for example, retails for $4, while a 5-pound bag of fresh organic white winter wheat flour of a varietal called Frederick, goes for $11 (and has a short shelf life of about two months). 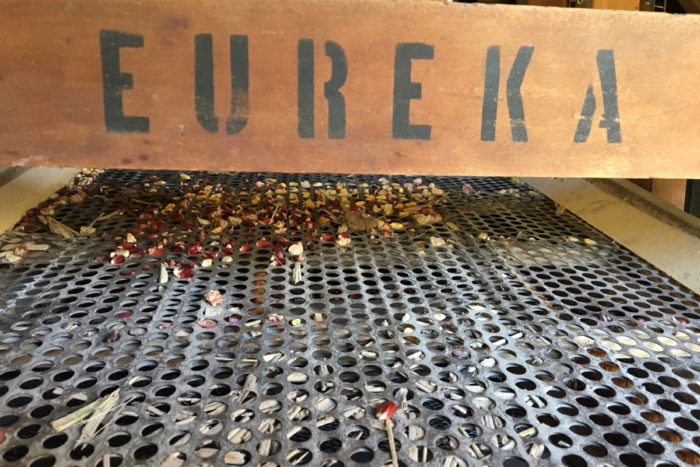 According to OGRIN’s Dyck, Castle Valley benefits from its proximity to a big city. Other mills exploit other resources. In Harrisburg, Pennsylvania, Small Valley Milling not only processes organic grains, it also grows them and sells them wholesale in large volumes. Outside Ithaca, New York, organic farmer and miller Thor Oechsner provided startup funds to artisanal Wide Awake Bakery in order to create another market for his crops. Dyck says millers have also begun networking to share vital information about techniques.

For all its success, the system still has kinks. The most pressing of these is storage—no small-scale miller ever seems to have enough of it. Fischer explains that grains are susceptible to moisture and rot (as well as rodents and insects), especially in the damp Northeast climate. Cool, dry storage is essential until he can sell the grains. “But if I commit to buying 50 acres of wheat, and it’s harvested in July, I have to put it all somewhere,” he says. Even when he’s grinding one ton a day throughout the year, Fischer’s two 1,000-bushel silos come nowhere near close to meeting his need. For OGRIN, helping millers access affordable storage is the next piece of the puzzle.

Meanwhile, for someone who started with what he admits was “zero knowledge of milling,” Fischer is helping to drive a growing movement to revitalize an agricultural commodity that no one thought much of 15 years ago.

Russell expects there will be hiccups as more new farmers and millers begin working with grains, making inevitable mistakes along the way. But with nine mills, and over 50 farmers already in production. “It really is a revolution,” she says.