The Power of a Communal Meal | Civil Eats

The Power of a Communal Meal 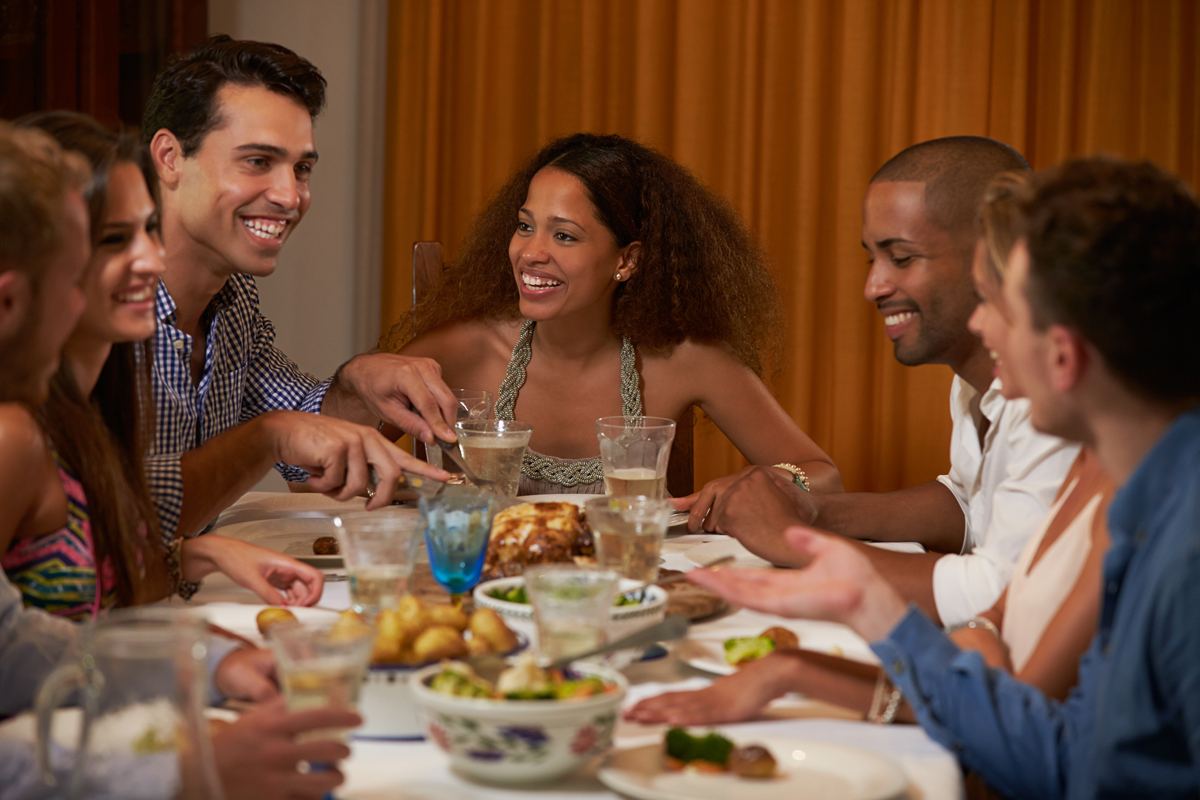 Tomatoes crushed by hand, simmered into a large Dutch oven, with garlic, salt, and pepper to flavor. Chunks of ground beef, adobo seasoning, and fresh parsley rolled into ball shapes and sautéed in a cast iron skillet. Once complete, it’s served with angel-hair pasta and grated parmesan cheese. The simple spaghetti and meatball dish is Joe Cleffie’s treasured Italian-American family recipe. The dish is for Sarah Grey and Joe’s weekly potluck dinner. The doorbell rings. It’s Friday night, and the first guests arrive at their Philadelphia home.

For several years, Grey, a work-from-home parent, has hosted Friday Night Meatballs. Grey says the shared meal became the remedy to her social isolation. Where Friday used to signal the lonely end to an even lonelier week, Friday Night Meatballs gathered a supportive community of people from various ethnicities, political beliefs, and food cultures.

Now, when fear of “the other” is fueling white nationalist groups to march on Charlottesville, Grey says, the weekly potlucks are evolving into a tool for breaking down walls of ignorance and strengthening multicultural ties. It’s a trend that’s happening across the country, as potlucks become a means to overcome social and political divisions.

Friday Night Meatballs began four years ago when Grey, then a new mother, found success starting her freelance editing business, but the challenges of working from home while raising a 2-year old daughter began to make her feel isolated.

“I didn’t have people around who had been through it before who could say, ‘This is normal. Every parent goes through this, and this is what to do when your child’s throwing a tantrum,’” she says. “It’s lonely, and it’s exhausting. It’s difficult when you don’t have that support.”

On her 33rd birthday, Grey posted a Facebook status: the first invitation to Friday Night Meatballs. She was amazed at the number of people who responded.

After the first dinner, the guest list had grown to include new and old friends from all sorts of food cultures—everyone adding a unique flavor to the potluck.

On the Serious Eats blog, Grey wrote about the simple idea of gathering for dinner, and she says she’s astounded at the number of people from around the world who have reached out to her and who also find themselves feeling isolated.

“It hit this sweet spot because so many people used to have that [community and mutual aid] in their lives before,” Grey says. “Now they don’t, and they miss it.”

Grey says the purpose of her weekly potlucks has evolved slightly since they first began. With growing national divisions, she sees Friday Night Meatballs as a tool for breaking down political barriers and building multicultural community.

These days, the first and most essential thing Grey says guests must bring to her potluck is “an open mind.” After that, a side dish or dessert will suffice.

“You don’t know who you’re going to meet and not even necessarily what you’re going to eat,” she says. “And when the moment comes to protest, or to stand up and say we’re not going put up this anymore, that’s when [these] ties aid all of us. The closer knit we are, the more likely we are to remain standing and keep our arms linked and succeed in changing things.”

Recent research out of the U.K.—where the success of last year’s Brexit vote has been compared to the rise of Trump and white nationalism in the U.S.—shows how social networks can affect political beliefs. A report by U.K. think tank Demos shows that people who don’t have a social network that is culturally diverse were more likely to support isolationist policies such as leaving the European Union.

That’s the incredible power in food, “especially good food,” says Julia Turshen, a home cook and author of Feed the Resistance: Recipes and Ideas for Getting Involved. In an op-ed for the New York Times, Turshen writes about how the conversation that happens when we share food around a table is much different from the kind of conversation that happens everywhere else.

One example she highlights is of Derek Black, who was born into a white nationalist family and has since renounced white nationalism. He now actively works to steer others away from the movement.

Black befriended a college classmate who invited him to a Jewish cultural dinner, and he credited the friendship and the Shabbat dinner for helping him reconcile his views, what they meant, and how he could change them.

“I think it’s an unbelievable example, but it speaks to the power of the dinner table and what can happen around it,” Turshen says.

It’s the face-to-face conversation that happens while sharing a dish that Grey believes gives potlucks their impact.

“Some of the conservative folks who are absolutely wonderful and kind in person might be total trolls online,” Grey says, “but there’s something about looking somebody in the eye and talking to them face-to-face that tends to bring out the best rather than worst in most people.”

The top advice Grey has for anyone preparing to host a potluck at home is trying not to spend more than 30 minutes cleaning up before the guests arrive.

“Once people come over and they see that it’s not perfect, it becomes a more relaxed atmosphere. People don’t feel like they have to dress up. Nothing is formal or fancy.… They can let their hair down.”

Kristin Donnelly, a food writer and the author of Modern Potluck, began documenting the spread of potlucks around the country that celebrate multiculturalism. On her blog, Donnelly wrote about the Global Table, the Syria Supper Club and Unity Tables hosted by an Indianapolis chef whose dinner menu includes award-winning shrimp and grits followed by challenging conversations about race.

“In these cases, people don’t have cooking or food backgrounds, or even event-planning backgrounds,” Donnelly says. “They just had a desire to gather people together around a common cause.”

In addition to providing resources on her site for people who want to start a community potluck, including a checklist for dinner organizers, Donnelly has hosted potlucks where she lives in Bucks County, a swing county in Pennsylvania. She says her potlucks are meant to inspire, create human bonds, encourage people to participate in activism, and discover the common ground among people who hold different political beliefs.

“The radical idea is to use potlucks to create conversation among people who otherwise would never sit down together,” Donnelly says. And in the process, these potlucks are building community.

This article was funded in part by a grant from the Surdna Foundation; it originally appeared in Yes! Magazine and is reprinted with permission.