Easy as Pie? Family Apple Farms Persist Against the Odds

The story of one Massachusetts apple operation sheds light on the state of family farming in a shrinking industry. 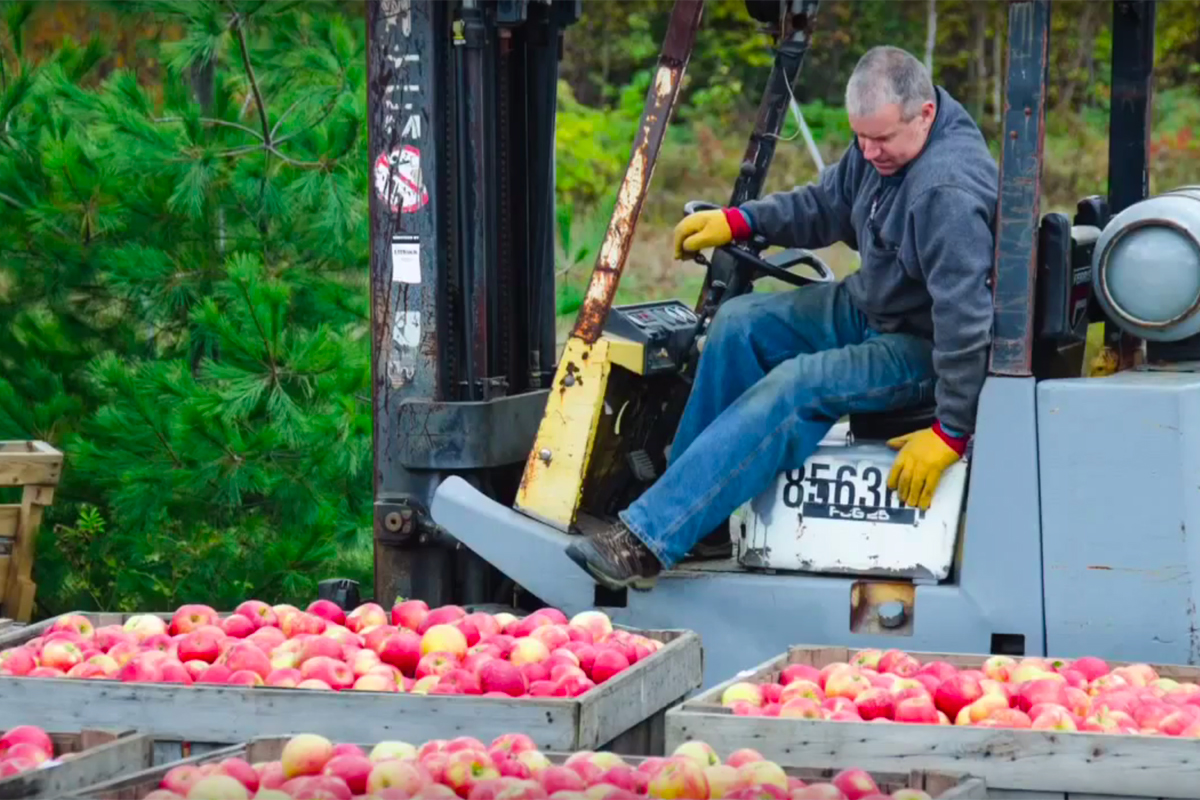 A typical fall morning at Clark Brothers Orchard in Ashfield, Massachusetts, looks something like this: A packaging order is missing, a delivery truck is late, the harvest crew is short-handed, there’s hail damage from a summer storm, and a possible outbreak of an invasive insect pest is underway. It’s only 10 a.m.

Brothers Dana and Aaron Clark, along with Dana’s son Silas, daughter Naomi, and her husband Craig, are the heart of the operation. Other family members pitch in when they’re needed. Mid-September is peak apple season, and this year’s crop looks like the biggest the Clarks have had in over a decade. 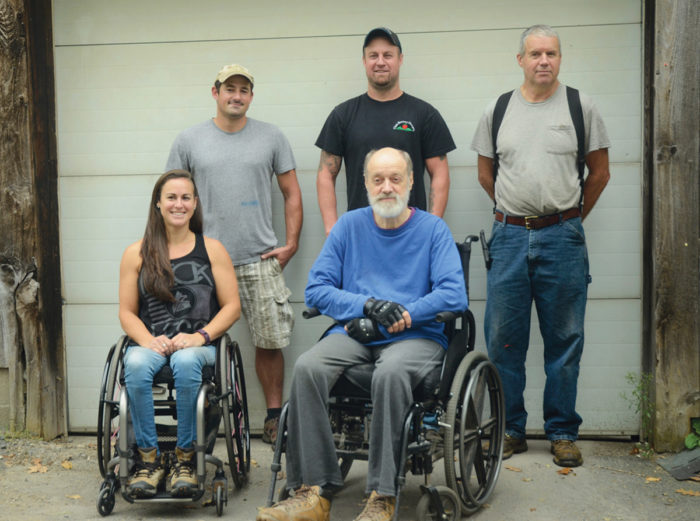 Apple season means pick-your-own outings and trips to the farmers’ market for many, but those direct-to-consumer outlets account for around .3 percent of U.S. farm sales, according to the U.S. Department of Agriculture (USDA). Most apples are sold through wholesale distributors, bought in the grocery store, or supplied by orchards like Clark Brothers. Any one of the morning’s challenges could cost the family a season’s livelihood, but experience, resourcefulness, and innovative strategies—mixed with a hearty dose of luck—have kept their 65-acre orchard going for five generations.

The Clarks’ morning scene offers a window into the challenges facing independent, family-owned orchards in a global commodity market. Apples are a $4 billion dollar a year crop in the U.S., second in size only to China’s. Two-thirds come from Washington, the rest from farms in New York, Michigan, and at least 26 other states. Farms like the Clark’s grow most of the apples we eat in the U.S., and they are up against big odds. On mornings like this, it’s not a given that any of them will make it to next season, much less be able to sustain their operations for another generation.

A Set of Challenges

This year, the Clarks weren’t certain they’d have people to help harvest their crop. A crew of Jamaican men have worked for them for decades through the H-2A guest worker program. Some have known Naomi and Silas (now in their early 30s) since childhood, and their experience and skill are not easily replaced. Three men arrived in April, and four others eventually followed, but approvals for another nine were delayed so long the men had to take jobs elsewhere. That left seven people to harvest a crop that normally takes 16. 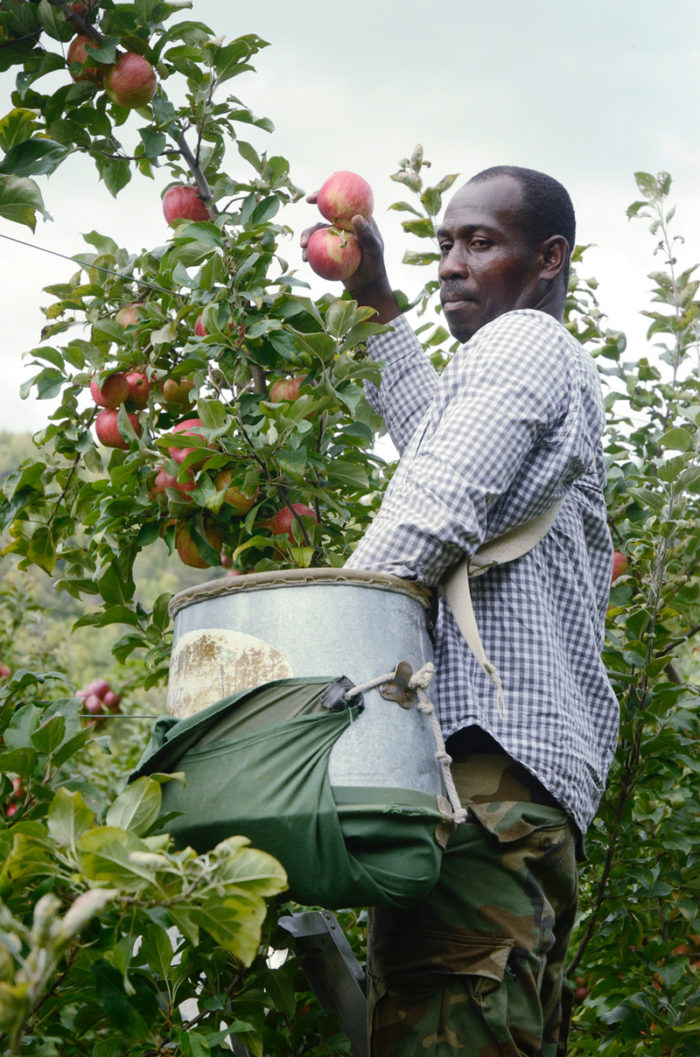 Eventually, their growers association helped locate a few guest workers harvesting tobacco who were willing to stay in the U.S. and transfer. “We weren’t sure they had any experience with apples and we’re still short three workers,” said Aaron.

Labor shortages are a major issue throughout agriculture, especially in fruit and vegetables. The H-2A program, despite many flaws, has been a primary source of seasonal workers in Northeast orchards since the 1950s. Orchards elsewhere, are turning increasingly to H-2A as one of the only legal means to hire seasonal workers. Locals are rarely interested in short-term work, or willing to do such hard physical labor; a nearby orchard has recruited an 80-year-old neighbor to help bring in their crop.

An unseasonable summer hailstorm is another nagging worry. There’s no way to know the extent of damage hail does until the picking starts—it could be half the fruit or more in parts of the orchard. Hail-dimpled fruit, sound but cosmetically flawed, has to be sold for juicing at a fraction of the price for fresh, in a global juice concentrate market dominated by the world’s largest producer, China.

Members of the Clark family coordinate constantly as bins of fruit are moved from orchard to pack-line, into bags and boxes, and from there into several cool-rooms. Craig reports they are almost out of the cardboard case inserts that protect fruit from bruising. Aaron winces: He ordered them weeks ago. The supplier is a large company, and the Clark’s order is low-priority. But they can’t pack without the inserts. Dana drives up the road to ask a neighbor for some, but comes back empty-handed; the neighbor has asked if he can borrow some boxes. Meanwhile, Craig has devised a substitute, and the crew keeps the apples moving.

For the past 15 years, the Clarks’ season has started with an order from a regional grocery chain that pays well and on time, and appreciates regional varieties. That first order is the difference between making payroll, or not, for the harvest workers. But after being acquired several times, most recently by a large national company, the customer is slower to respond. This year, the chain decided to skip the first order, for Macintosh, and wait for Honeycrisp, a more popular variety that sells at a higher price. Their order for half a truckload came just in time to make the first payroll.

A new customer helps offset the skipped order. At a matchmaking event hosted by Community Involved in Sustaining Agriculture (CISA), a Western Massachusetts organization that supports and promotes local food, the Clarks met the buyer for a grocery chain they’d been hoping to sell to, who offered a good price, and has begun placing regular orders.

The odds often seem stacked against orchards like Clark Brothers. The number of U.S. farms growing apples has been declining for over a quarter century. Between 1983 and 2007, the U.S. Census of Agriculture reported a loss of more than one-third of the farms producing apples commercially. Some were sold to larger orchards, but many left farming altogether. The number of acres planted to apples during the same period also declined by over 30 percent. 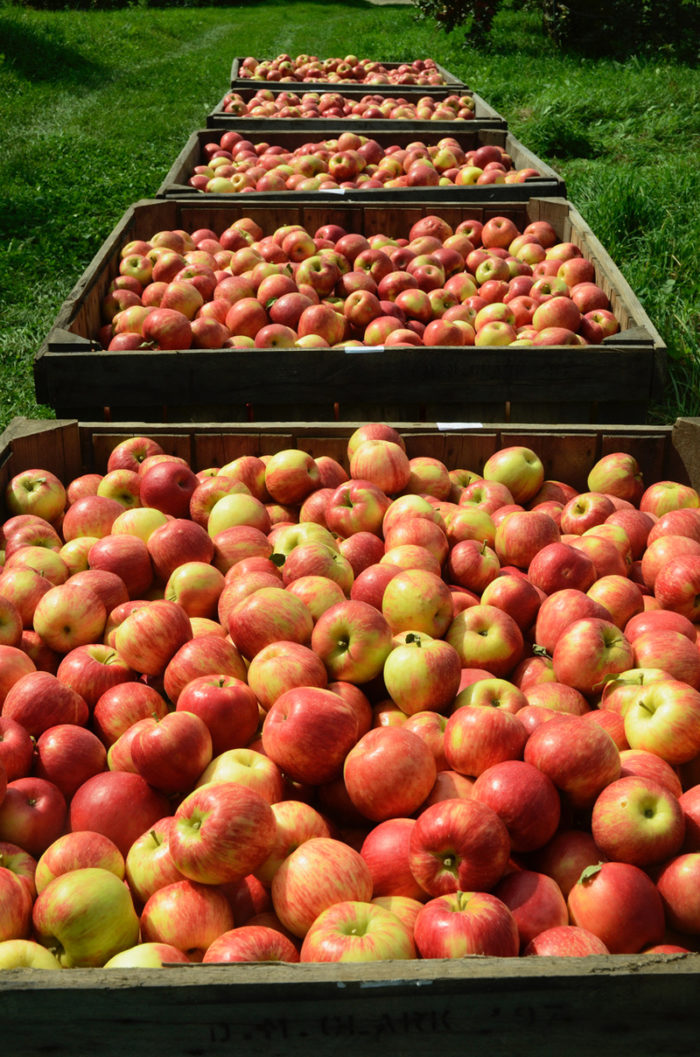 As the number of orchards and acreage dropped, the size of the U.S. apple crop steadily increased, thanks to new high-density plantings that fit thousands of trees per acre. That growth doesn’t translate into profits, though: prices to growers have stayed static while costs for transportation, marketing, and labor steadily increased. Food system analyst Ken Meter has found that when adjusted for cost of living, the annual dollar value of apple sales between 1924-2010 is essentially flat. That explains in part why so many orchards are disappearing, and why over 50 percent of U.S. farm operators rely on off-farm jobs for income and health insurance.

What it doesn’t explain is how families like the Clarks keep growing apples, a crop that requires a tenacious mix of dedication to family and the land; eaters who want to buy local; retail and wholesale produce buyers who still value handshake relationships; the support of grower associations and nonprofits that coordinate infrastructure and help out when a crop fails or packaging runs short; and a vital, though under-funded, land grant and public research system that helps improve growing practices, fend off invasive insects, and find new varieties.

The Clarks’ toughest competition comes from Washington state, which now produces nearly 65 percent of all apples grown in the U.S. The size, varieties, and prices of the Washington crop determine apple economics for the rest of the industry. Washington orchards range from a few acres to tens of thousands.

Unlike some other sectors of agriculture such as pork, beef and poultry, where ownership of packing and marketing is concentrated in a few large, non-farming companies many of the companies that grow, pack, and market apples are grower-owned family companies or coops. (According to Pew Charitable Trust, in 2010 the four largest companies owned 51 percent of the poultry industry, 85 percent in beef, and 65 percent in pork.)

In Washington State, for instance, most of the largest orchards and fresh apple packing and marketing companies are cooperatives, such as Chelan Fruit, or grower-owned operations such as Stemilt, Domex, and Rainier, which grow their own fruit and also buy from hundreds of other family-owned orchards of various sizes. In the rest of the country the orchards and packers tend to be smaller and even less likely to be owned by non-growers or investors.

The Clarks’ orchards aren’t certified organic. But they are long-time practitioners of an approach called integrated pest management (IPM). They use advanced techniques such as mating disruption, trapping, and monitoring to minimize the need for chemical treatments, and have a healthy population of native pollinators. One of the toughest challenges in a balanced ecosystem like the Clarks’ is the introduction of invasive pests, exacerbated by global trade and changing weather patterns. 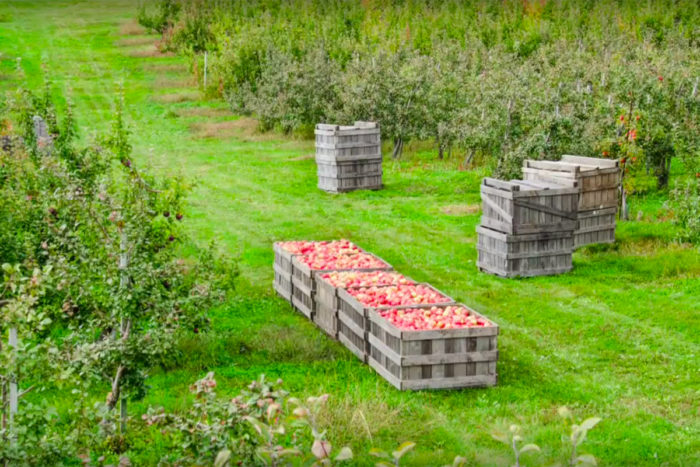 One such pest—the Brown Marmorated Stink Bug (BMSB)—has been moving north from Pennsylvania for several years. It can do extensive damage if left unchecked, and research into biological controls hasn’t yet caught up with the spread of the insects, now found in over 22 states. But the chemicals that control BMSB can be hard on beneficial insects, which in turn keep other pests under control. Asked about their commitment to IPM, Dana says vehemently, “I hate to spray [pesticides]. But if we were hit with something [like BMSB], we don’t see any alternative.”

Using the least toxic materials available often means accepting more risk—a decision that is hard to explain to consumers. So in 2004, Clark Brothers Orchard helped found a program called Eco Apple, a production and marketing partnership that works across a network of growers, scientists from land grant universities, and two nonprofits: the IPM Institute of North America and Massachusetts food hub, Red Tomato. [Disclosure: the author is Red Tomato’s director of marketing, and works closely with the Eco Apple program.]

Most certified organic apples sold in the U.S. are grown in Central and Eastern Washington, where the dry climate makes organic practices especially effective. Eco Apple certifies fruit grown using ecological production methods that suit the Northeast with its humid climate and considerable range of pest and disease pressures.

Eco-certification is one way Clarks can let consumers know about the extra care that goes into their production decisions, and the distinction helps them maintain competitive prices and a foothold with wholesale buyers looking for something that makes their apples unique.

As global consolidation of marketing, distribution, and retailing drives even the most loyal customers to cut costs and standardize supply chains, the pressures on farmers like the Clarks’ are steady and relentless. It’s a daunting picture, but small shifts matter. The same combination of factors that determines the perilous edge between a good year and a major loss also means that every small victory can make a big difference: a grocery buyer who’s reliable and pays a fair price, whose customers want to know the source of their apples; collaboration with other growers and organizations who help out when labor or packaging are short; and a robust public science and farm program that supports growers with investments and research.

It all adds up. Tipping the balance often enough could mean a sixth generation at Clark Brothers Orchard.

Susan Futrell is the author of Good Apples: Behind Every Bite (University of Iowa Press). She has worked in marketing and food distribution with farms, food businesses, and nonprofit organizations for over 35 years. She is a freelance writer, essayist, and consultant, and is currently Director of Marketing for the nonprofit Red Tomato, which does marketing, logistics, and market development for a network of fruit and vegetable farmers in the northeastern US. She’s a fifth-generation Iowan and divides her time between Iowa City, Boston, and mid-coast Maine. Read more >