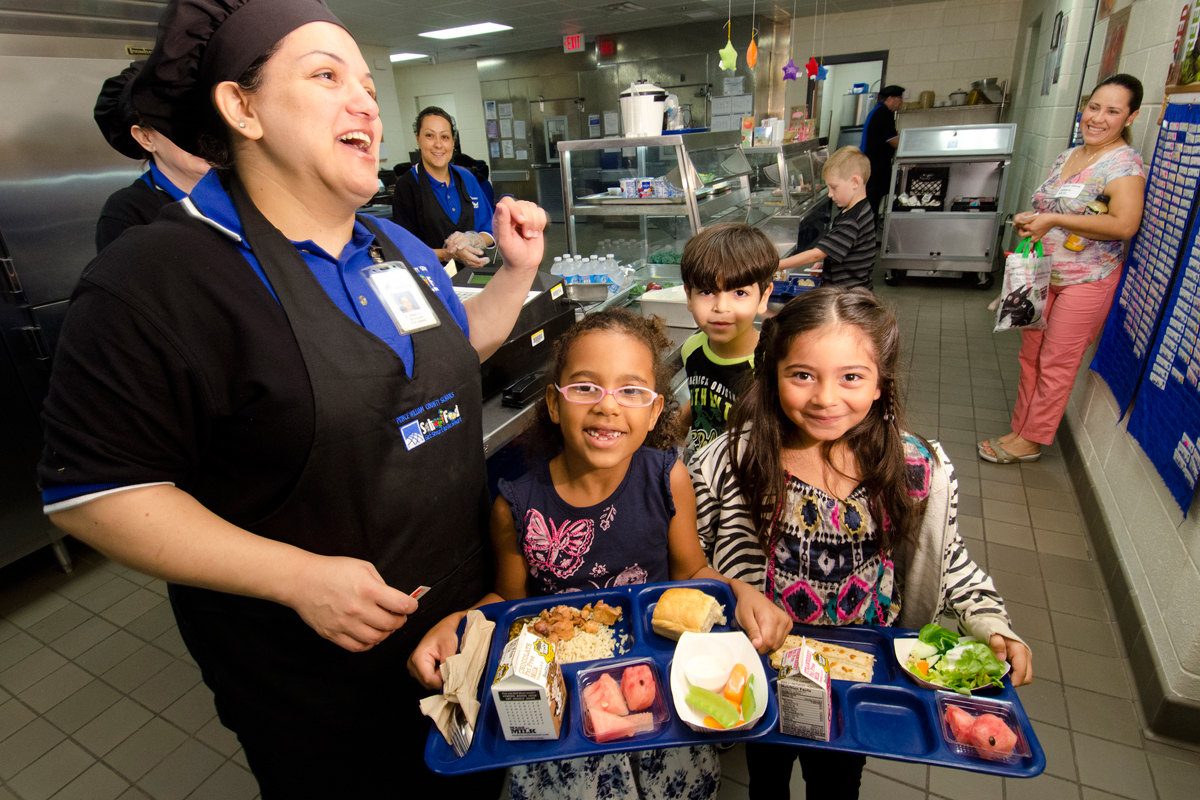 When New Mexico passed the first comprehensive law banning lunch shaming last April, the state made visible what anti-hunger advocates, school food professionals, and lower-income families have known for decades: Children with school-meal debt can be stigmatized in the cafeteria.

If social media is any guide, the idea of singling out kids with unpaid balances—by making them do chores, denying them a meal, serving them a cold cheese sandwich, or stamping their arms or hands—has been met with almost universal disapproval.

And while the recent coverage has lead to an apparent uptick in private philanthropy efforts to cover families’ meal debt—including one to honor Philando Castile’s legacy by paying off the lunch debt at his school—the question remains: Has the moral outrage by politicians, celebrities, and ordinary citizens done anything to meaningfully curb lunch shaming?

A recent survey of 50 large districts by the Food Research and Action Center (FRAC), an anti-hunger advocacy group, showed no significant sea change, even though districts were required for the first time to put their meal debt policies in writing by July 1.

Of the 40 districts surveyed that have written policies in place, only 13 have a policy requiring schools to serve school meals to all children regardless of ability to pay. The remaining 27 districts take a variety of approaches to meal debt, with 10 denying meals to high school students as soon as they have an outstanding balance—and some of those to middle school students as well. And 17 districts reported placing a cap on the number of regular meals served before a meal is denied, with some imposing the cap only on older children and taking a more lenient stance with those in elementary school.

The FRAC survey also found that when districts do provide meals to students who can’t pay, in many cases it’s still a cold, alternate meal such as a peanut butter sandwich. And when it comes to especially stigmatizing practices such as the use of hand stamps or wrist bands, FRAC found that “most school districts do not mention shaming acts in their policy [and] only a few have explicit language that prohibits the stigmatizing of children who cannot pay for their meals.”

FRAC reported that one district’s policy even states that kids with debt can only get a meal “in exchange for the student performing chores in the kitchen. The student must first apply and be accepted to work in order to receive the meal.”

“The more we learn about how kids are treated when their parents owe lunch money, the more obvious it becomes that national standards banning school lunch shaming are needed,” said Jessica Bartholow, a policy advocate at the Western Center on Law and Poverty, which conducted similar meal debt policy research to support anti-shaming legislation in California.

While the sample size of the FRAC survey was relatively small—there are more than 13,000 school districts in the country—its findings are in line with the observations of the School Nutrition Association (SNA), an organization of over 57,000 school food professionals.

SNA spokesperson Diane Pratt-Heavner told Civil Eats that her discussions with members and the outside media reports she has seen all indicate there’s a wide variety of policies among districts, and even among different age levels within the same district.

According to Pratt-Heavner, schools try to prevent families from accruing debt in the first place by, for example, helping them fill out federal paperwork or using online technology that makes it easier for parents to monitor meal accounts. But when those efforts fail, the SNA defends schools’ continued use of alternate meals.

“School nutrition professionals want all students to receive a balanced, reimbursable meal,” Pratt-Heavner said. “But when meal charges and debt escalate, some districts offer students alternate meals as a way to preserve the financial sustainability of the program while making sure no child goes hungry during the day.”

If the New Mexico law and its attendant publicity didn’t put an end to lunch shaming, it clearly did inspire several states to introduce their own anti-lunch-shaming bills. According to FRAC, new lunch shaming legislation is currently pending in New York and Pennsylvania, and has been signed into law in California, Hawaii, Texas, and Oregon. In West Virginia, the state amended its school nutrition policy to address the problem.

Even so, anti-shaming legislation now on the books still takes a varied approach in addressing the problem.

For example, the New Mexico and Oregon laws forbid schools from publicly identifying children with meal debt, including using hand stamps, denying a meal, or offering an alternate meal. But the Texas law doesn’t contain this broad language, and instead only requires districts to set a grace period during which children with debt must be given their regular meal; after that period expires, the statute is silent on how children are to be treated.

The Hawaii law forbids denying children a meal, but it doesn’t address other potentially stigmatizing practices such as the use of hand stamps. And the California law, passed just last month, would still allow a school to deny a meal to a debt-ridden child or serve her an alternate meal so long as it treats all children who show up in the cafeteria without funds (including those with no outstanding balance) the same way.

Similarly, as Civil Eats previously reported, a federal anti-shaming bill introduced in Congress in May would ban some stigmatizing practices but would do nothing to prevent children from being given an alternate cold meal nor would it ban the outright denial of a meal. On top of that, the bill has only been given a 1 percent chance of passage by legislative analysts.

The weaknesses in some anti-shaming laws may come down to money. If districts are required to provide unlimited hot meals to children without payment, they could well be saddled with more bad debt. But legislatures haven’t shown any interest in appropriating funds to cover those potential shortfalls.

Advocates don’t necessarily see this lack of funding as problematic, however. “I’m not convinced [the New Mexico law] is going to dramatically increase the amount of unpaid debt at the end of the year,” said Jenny Ramo, executive director of New Mexico Appleseed, the anti-poverty group that spearheaded the state’s law.

For example, Ramo points to provisions in the law (adopted in several other states’ versions) intended to reduce debt, such as requiring districts to sign up more qualified children for federally subsidized meals to expand the overall budget and provisions regarding the use of debt collection agencies.

“I think schools have been a bit complacent about getting bills paid and just using the cheese sandwich and other shaming as leverage,” Ramo said. “Districts now have to be more aggressive about enrolling eligible children.”

But the SNA’s Pratt-Heavner notes that the organization’s 2016 annual survey found that nearly 75 percent of 1,000 surveyed districts were already grappling with unpaid meal balances. And since bad debt can’t be covered by federal meal reimbursements, districts have to find the money some other way, such as through the sale of “a la carte” snacks or state matching funds.

If these sources don’t pan out, Pratt-Heavner warned, “the school district must pay the loss out of general education funds. So state legislatures, school boards, or other officials that mandate school meal policies without providing funds to cover the cost must realize that these policies could impact education.”

A Federal Program that Could End Lunch Shaming

Of course, lunch shaming wouldn’t be an issue if schools could simply provide meals at no cost. Schools and districts in certain high-poverty areas can do just that under the Community Eligibility Provision (CEP), a federal regulation that allows them to serve free meals to all students, regardless of income level and without the need for paperwork.

In September, New York City became the largest district in the country to take advantage of the CEP, and some observers implicitly linked that development to current interest in lunch shaming. But Liz Accles, executive director of Community Food Advocates, was a leader of the effort to persuade New York City to use the CEP and doesn’t think lunch shaming was a major factor, given that the campaign had been going on for decades.

That said, Accles does report that “the language [of lunch shaming] seeped into the debate” in New York City when the New Mexico law was passed. She says that the discussion may have raised New Yorkers’ overall awareness of the plight of impoverished kids in the cafeteria.

“It certainly helped enhance the imagery in the public mind, where it hadn’t [been] before,” she said. “People understand poverty stigma, but lunch shaming somehow resonates in a certain way. People just feel it in their hearts differently.”

Right now, only about half of the districts that qualify for the CEP take advantage of it, but Accles hopes the new concern over lunch shaming and New York City’s recent example will encourage more of them to consider doing so.

“The things that localities do to try to twist around shaming [in their meal debt policies] can be so complicated, rather than just making meals free for all,” she said. “Using the CEP means just being done with it.”