Farmers’ Markets are Beloved, but the Government May Cut Their Funding | Civil Eats

Farmers’ Markets are Beloved, but the Government May Cut Their Funding

Farmers’ market proponents are fighting to preserve a federal program that helps farmers grow their businesses by selling at farmers’ markets. 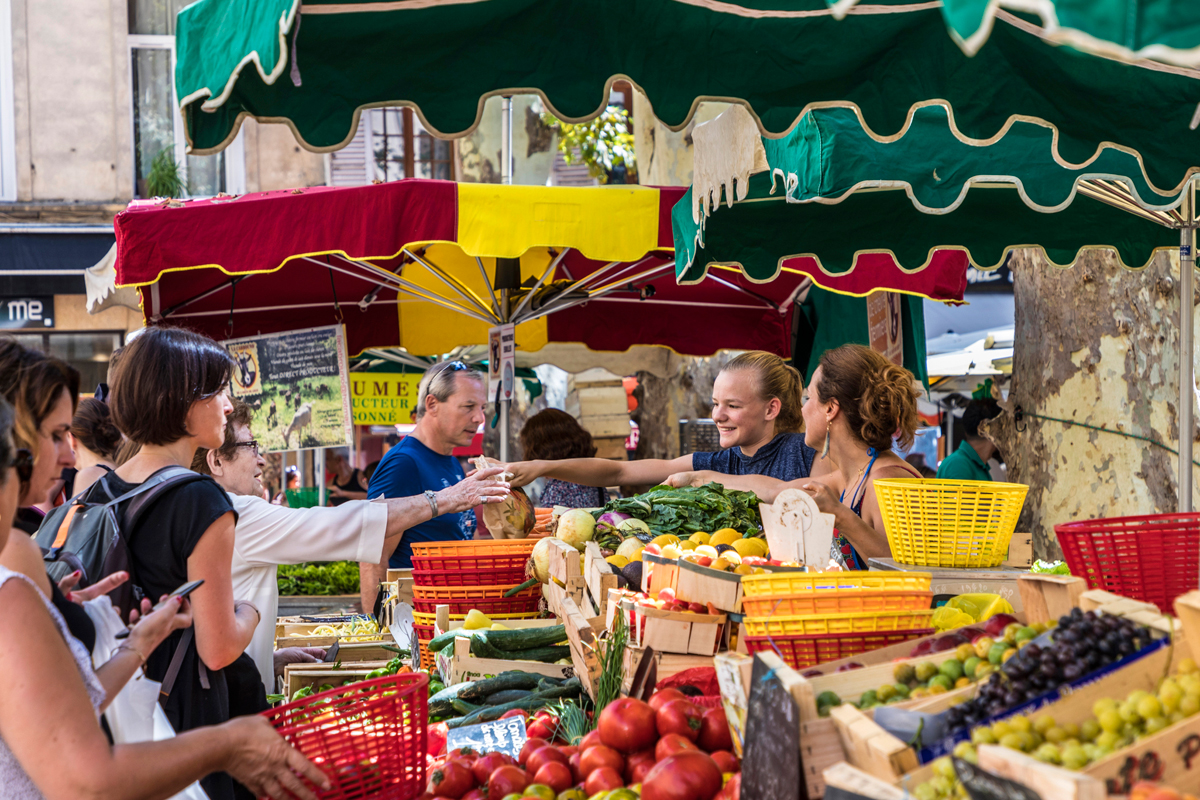 America’s current farm bill expires at the end of September 2018, leaving less than a year before lawmakers could begin to make cuts to a variety of federal programs affecting food and farming. And, despite America’s growing love for farmers’ markets, it’s looking unlikely that the Farmer Markets Promotion Program (FMPP) will be prioritized in the coming bill.

Operating with just five full-time employees on an annual budget of $15 million drawn from the 2014 Farm Bill, the FMPP awards competitive grants that “support outreach and promotional activities that help direct producer-to-consumer markets become self-sustaining and be repeated in communities across the country,” according the U.S. Department of Agriculture’s Agricultural Marketing Service, which administers the program. Since it was first funded in 2006, the FMPP has helped the number of farmers’ markets in the U.S. more than double from around 3,000 to over 8,600.

Since the 2008 Farm Bill, 57 percent of FMPP’s 879 grants—worth over $58 million—have gone to nonprofit corporations, while 25 percent have been routed to agricultural and producer groups and 15 percent have gone to local governments. The grants fall into three categories: marketing and promotional activities; capacity building; and training, education, and technical assistance.

“Most farmers’ markets are operated by nonprofits, community agencies, or small business enterprises,” said Martin Bourque, executive director of the Berkeley-based Ecology Center, which has long advocated for and operated farmers’ markets. “They don’t have the margins to mess around. Losing even a small portion of money for promotion, outreach, events, marketing—things that supermarkets have a huge budget for—pulls a lot of support from what isn’t a very level playing field to begin with.”

The president’s proposed 2018 budget eliminated funding for the FMPP, a move that chafes against his administration’s previous expressions of support for rural agricultural communities, said Jen Cheek, executive director of Farmers Market Coalition. But it’s still early, she said.

“It isn’t clear why funding for FMPP was zeroed out in the president’s proposed budget, which cuts [all] USDA funding by a pretty staggering 21 percent,” said Cheek, whose national organization advocates for North American farmers’ markets. “But it’s important to remember that the president’s budget proposal is just that—a proposal. Congress controls the purse strings, and both Democratic and Republican members of the House Agriculture Committee have expressed concern that the initial budget request cuts too much.”

While funding for FMPP may seem ephemeral, its effects are anything but. Farmers’ markets provide thousands of jobs and have helped grow other local food sales though community supported agriculture, food hubs, and on-farm markets. All told, farmers’ markets sell around $3 billion in food annually, including nearly $20 million redeemed by SNAP shoppers. In addition, farmers’ markets bring sustainable food and farming to the mainstream.

Though the growth of farmers’ markets has leveled off in recent years, their proliferation over the last few decades was driven by consumer demand, according to the Farmers Market Coalition. Unlike other products of the popularity of local food, the FMPP gave markets the ability to turn that increased demand into direct income for farmers, Cheek said.

“Markets receiving FMPP grants saw vendor sales increase by an average of 27 percent, while 94 percent of FMPP grantees report an increase in the number of first-time customers at their market,” Cheek added. And a recent Federal Reserve report found that over the last two decades, direct sales of farm products grew at a rate roughly twice that of total U.S. farm sales.

Healthy food’s multiplier effect means it would be illogical to slash funding, which should not only be increased but made mandatory, said Bourque of the Ecology Center. “Increase it by a factor of 10,” he said. “Make it so people don’t have to worry about its elimination every cycle. Make sure grants are dedicated to farmers’ markets and not grocery stores, which have enough money to run incentive programs on their own dime.”

Farmers and farmers’ markets across the country use FMPP money to cover the basics and to think big about their operations.

Kurt Tonnemaker, who grows organic fruit, vegetables, and hay in Washington State, said his farm relies on the money it earns at markets to help cover the costs of its operations. “We sell a lot of our products wholesale, but sometimes that doesn’t cover the cost of watering, maintaining, and fertilizing our trees,” said Tonnemaker, who provided testimony before the House Agricultural Committee in January about Tonnemaker Hill Farm’s direct marketing efforts. “Farmers’ markets provide retail dollars, so the help we get from [the FMPP’s] programs is important,” he said. “Losing them would be hard for many farmers.”

Other organizations, such as the Washington, D.C.-based nonprofit Community Foodworks (CFW), which operates markets and community-supported agriculture (CSA) programs throughout the mid-Atlantic region, have used FMPP funds across multiple states to increase access to local food. In its 2016 report, CFW noted that it added four new farmers’ markets and witnessed its subsidized market share CSA more than double in size over the past year.

“The boost from the grant allowed our organization to expand operations and systematically add capacity, so that we could maintain and even grow our programs at the end of the grant period,” said CFW’s food access director, Dalila Boclin. “I’ve seen organizations look to the FMPP, as well as the USDA’s Farmers Market and Local Foods Promotion Program, as capital investment for new ideas. The applicants and grantees represent some of the most innovative organizations in the field, and raise the standard for local food-promotion work.”

Erin Tormey, founder of California-based Coastside Farmers’ Markets , and Half Moon Bay’s 2017 Farmer of the Year, sees government financial help as vital. “Maybe there doesn’t seem like a discernible federal benefit to providing what is a nominal amount, but it makes a big difference,” she said. “Having had access to FMPP funds to get PSAs up, expand our reach, and have the backbone for things like the Local Match program, losing them would be a serious loss of support. Every cut that may be coming down the pike for the farm bill is a loss, because agriculture is terribly underfunded to begin with.”

Though the president has slated the FMPP for defunding, the House Agriculture Committee indicated its support for the program during a meeting with the Farmers Market Coalition, explained Cheek, and the committee eventually included full funding for the FMPP in its budget proposal, which has more influence in determining the final funding for the program.

“When the budget was released, Secretary of Agriculture Sonny Perdue had been on the job a month, and the development process appears to not have had the appropriate expertise on agriculture,” she said. Since then, Perdue has explicitly supported farmers’ markets—both in his testimony to Congress and in his signing of a proclamation for National Farmers Market Week in August. As the farm bill process evolves, Cheek expects proposals to retain and increase funding for FMPP to be introduced.

In addition, legislators have introduced both the FARMS Act and the Urban Agriculture Production Act this fall, each of which contains provisions to ensure funding for the FMPP.

“With commodity prices so low, it seems farm state congressional representatives want to move fast on reauthorizing the farm bill,” said Bourque of the Ecology Center. “But it’s an uncertain public policy era; we get multiple mixed messages from the administration, and you never know whose perspective will prevail.”

Bourque believes that with the startup phase for farmers’ markets complete, the movement needs mandatory funded infrastructure that indelibly places its cultural and economic stamp on communities. In fact, he hopes that future versions of the farm bill will fund permanent infrastructural for markets such as electrical power, access to water, street closures, equipment and signage.

“America’s future is small, direct-market farmers,” said Tormey. “The idea that we improve a budget by cutting it, that we improve the conditions of our communities through austerity, are counter-intuitive by any measure.”

“The economics don’t hold up,” she added. “Whatever our heritage or politics, we share this: If we don’t, we will die. And if we don’t eat well, we will die much earlier.”