Gen Z is Creating a Market for Fake Fish

Institutional buyers like universities and corporate campuses are the target market for a new wave of meat alternatives. 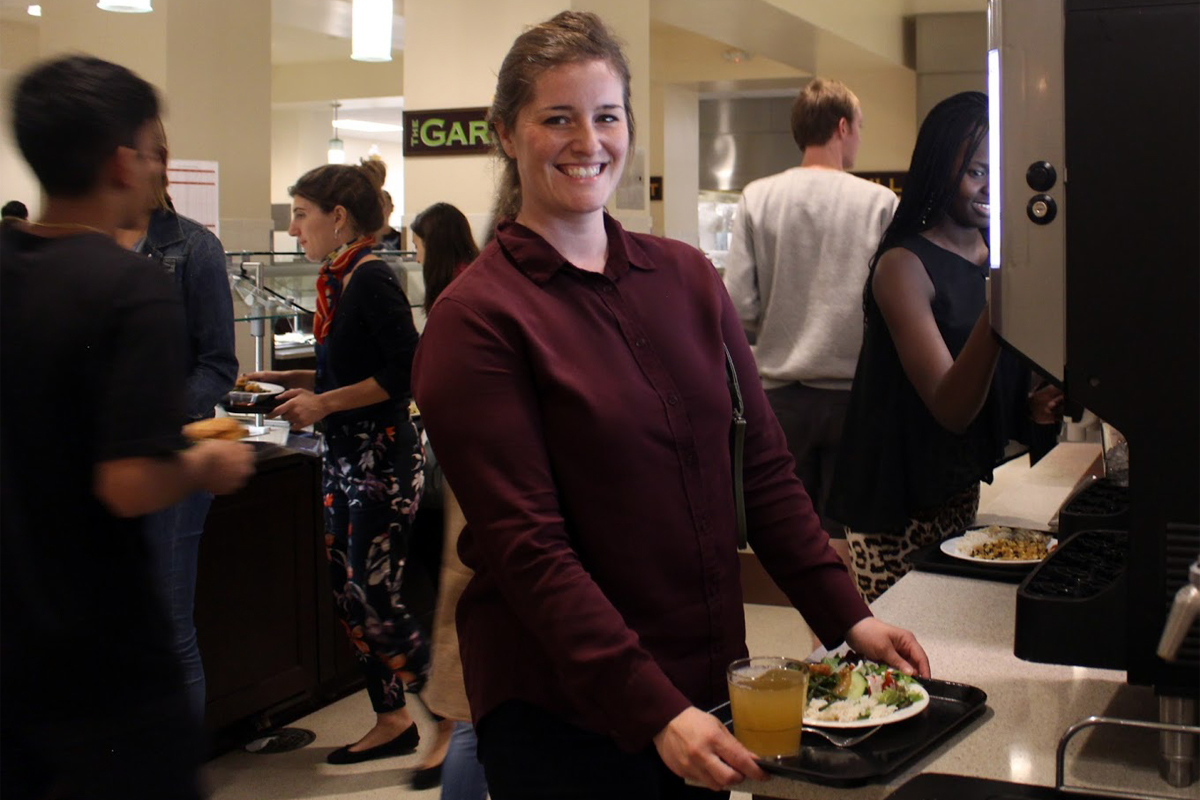 Millennials may have killed big-chain restaurants like Applebees, but Generation Z, the generation that follows, is breathing life into a new crop of vegan seafood products with their zeal for environmental and social responsibility.

Exhibit A is a new algae-based shrimp alternative from California-based New Wave Foods that mimics the crustaceans’ distinctive texture and taste—with a goal of increased sustainability.

“It can take 15 years to pass policy to protect fish,” said New Wave Foods co-owner Dominique Barnes, a marine biologist who pursued social entrepreneurship as a tool to reduce fishing impacts on oceans. She and her partner, material scientist Michelle Wolf, formed the company in 2015. They now have lines of crispy, steamed, and raw shrimp products.

“We are targeting food service, specifically college, university, and corporate cafeterias,” said Barnes. “There is a growing demand and awareness of food sustainability from that 18-to-24 age group,” she added.

The seafood industry in particular has been the subject of a slew of bad news in recent years, notably slavery revelations, as well as fraud, traceability, and by-catch concerns. “Shrimp has one of the worst supply chains in the seafood industry,” Barnes said.

In response, plant-based food sales have topped $3.1 billion, according to a 52-week survey conducted by Nielsen on behalf of the San Francisco-based Plant Based Foods Association. Additionally, sales of plant-based meats grew by 6 percent over last year, and meat substitutes are expected to grow to almost $6 billion by 2022.

“Plant-based seafood is an under-tapped market,” said Sabina Vyas, a consultant to the Plant Based Foods Association.

In addition to New Wave Foods, New York-based Ocean Hugger Foods is also working on plant-based seafood alternatives and has set its sights on vegan sushi. The company’s first product is Ahimi, a roma tomato-based substitute for raw tuna. 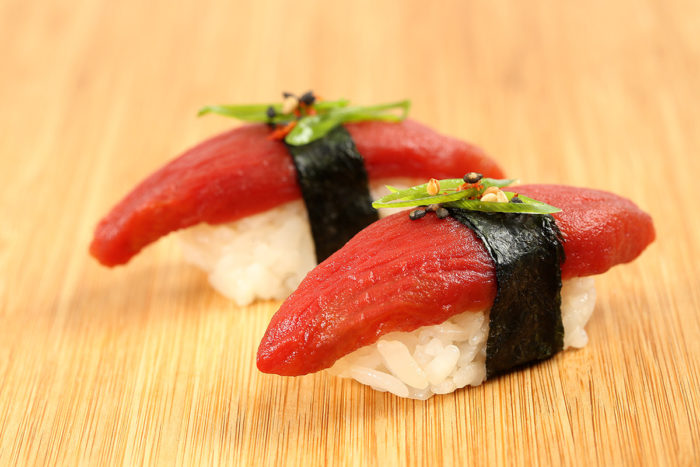 James Beard Award-winning chef James Corwell developed a mechanical process that strips out the tomato flavor, leaving behind firm, meaty flesh that can be made savory with soy sauce and sesame oil, says Ocean Hugger Foods CEO David Benzaquen. Using the same process, they are also developing an eggplant-based eel and a carrot-based salmon.

Like New Wave Foods, Ocean Hugger is rolling out its products to food service operators—college campuses, as well as Whole Foods’ sushi bars.

The large-volume buyers are also a good target because seafood dishes, particularly raw ones like sushi and poké, are most often restaurant choices rather than made at home.

Dawn Aubrey, associate director of housing for dining services at University of Illinois at Urbana-Champaign, has been using a plant-based shrimp from companies such as Pure Vegetarian for the last six years in dishes ranging from stir-fries to fettucine alfredo. Students love it, she says.

“Colleges and universities are the birthplace of food trends,” said Aubrey.

Vyas of the Plant Based Foods Association agrees that colleges uniquely reflect culinary industry trends. “If the customer isn’t happy, food service isn’t happy,” she said. “They don’t want to see food waste or lost dollars, so they have to meet students where they are.” 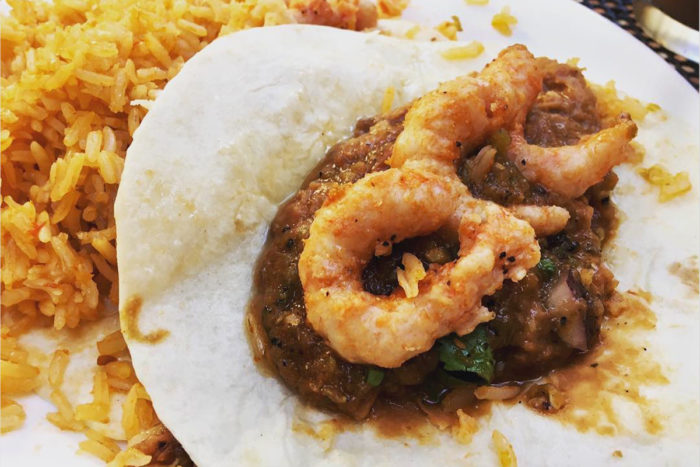 The chef debuted a vegan shrimp stir-fry there this month, which will become a regular item. Most students have had a positive response, Zhou said.

“It’s not exactly the same as shrimp, but it tastes great, works in a traditional shrimp dish—and gives vegans a more appealing option,” she said.

Another dynamic makes colleges appealing testing grounds, said Sharon Olson, co-founder of Y-Pulse, the company that conducted the 2015 survey. “College campuses feed the consumers of tomorrow,” Olson said. “These students are developing habits of a lifetime, including products they’ll look for when they graduate.”

Plant-based alternatives to animal proteins are on the rise on corporate campuses as well, said Maisie Ganzler, vice president of strategy for Bon Appétit Management Company, which serves both corporations and universities.

“Amongst vegetarians and vegans, there was appreciation for a more fish-like option, and general sushi eaters found Ahimi to be a great addition to their plates,” she said. Plus, she added, “chefs are eager to work with them.”

Shrimp alternatives are an obvious product to develop because shrimp is the most consumed seafood product on the market. It’s not just shrimp that is getting veganized, however. Other companies, for example Sophie’s Kitchen and Good Catch Foods, are working on fishy fish as well, said Vyas.

“Seafood is pretty darn tricky [to mimic],” said JP Reyes, executive chef at the Sarap Shop, a Filipino food truck in San Francisco, who helped develop a ceviche-type recipe with New Wave shrimp. “There’s a flavor and texture to seafood that changes quickly depending on how it’s prepared—whether it’s raw, steamed, sautéed.”

New Wave Food’s shrimp continues to improve their flavor and texture—and it’s fun to cook with, he added. As demand for responsibly produced and processed plant-based proteins increases, companies will need to scale up quickly, Vyas said.

When New Wave Foods started back in 2015, they were hand-producing 30 pounds in three 12-hour days. As they mechanize processes, they are currently up to 3,000 pounds a month as they secure orders from large clients. They are in talks with four new universities and hope to reach up to 30,000 pounds a month by next year.

To avoid a bottleneck in production, Barnes chose ingredients with FDA approval. The company’s current supply comes from farms overseas, for example, in the Netherlands, but they plan to source ingredients from farms in California. Even with transport, though, the environmental footprint is much less than wild-caught shrimp or farms in southeast Asia.

There are no by-catch or slavery concerns, and Barnes is confident resource usage is low by comparison, but Barnes is partnering with the World Wildlife Fund to conduct a full life cycle analysis. “That’s the beauty of algae—[it’s] such a great renewable resource because it grows quickly,” Barnes said.

“We use commodity ingredients, available year round,” he said. “As the oceans become more traumatized, [seafood] supply issues will only get worse.”