As the poultry industry pushes for faster line speeds, advocates take stock of improvements and challenges. 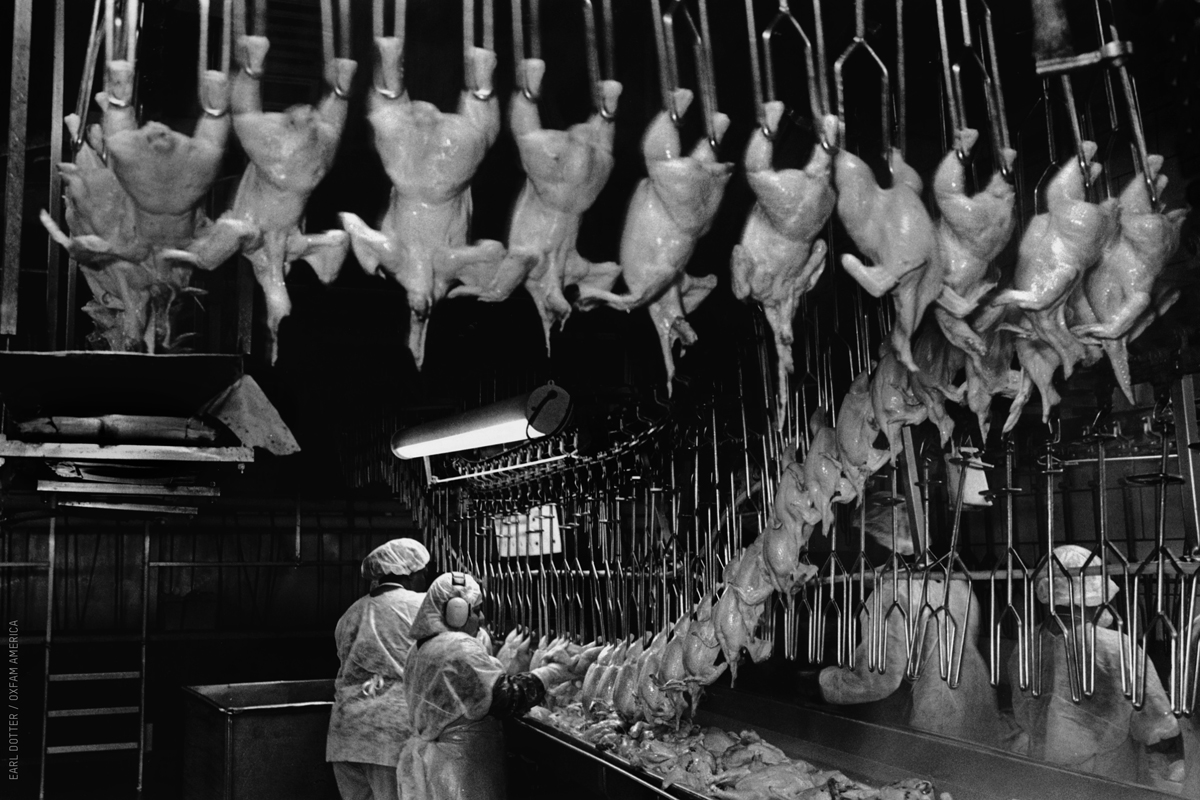 [Update: On January 29, 2018, the USDA denied the National Chicken Council’s petition to allow an increase in chicken processing plant line speeds. As a result, the maximum allowable line speed in chicken factories will remain at 140 birds per minute rather than increasing to the proposed 175.]

After Patricia Zalasar* moved to the United States from Guatemala to escape a violent relationship, she secured a job at a Case Farms poultry processing plant.

The former elementary school teacher described her work on the factory line, slicing breasts, tenders, and wings out of chicken carcasses at the pace of 40 birds per minute—2,400 each hour—as “pesado y duro,” or “heavy and hard.”

Less than a year after starting the job, she feels pain and numbness in her hands. “At home after work, when I try to go to sleep, my hands hurt,” she said, gripping her right wrist and motioning up the underside of her forearm to her armpit. “Every time I get up early to work, my arm hurts.”

Zalasar’s experience is similar to that of many poultry workers in the U.S., who have been found to suffer high rates of carpal-tunnel syndrome and severe injuries including amputation as a result of the quick and forceful motions they carry out over and over each day on the line.

Unfortunately for Zalasar and others, conditions could get even worse if a recent industry proposal to allow increased line speeds moves forward.

Three years ago, the U.S. Department of Agriculture (USDA) capped the maximum speed at which the chickens can move through the processing plants at 140 birds per minute (bpm), reasoning that speeds any faster would exacerbate injuries in workers, as well as abuse in animals and contamination in meat.

On September 1, however, the National Chicken Council petitioned the USDA to waive the 140 bpm limit and allow plants to operate at speeds of 175 bpm. (The USDA has announced a public comment period on the petition ending December 13.)


“The line speed is the root cause of a lot of the worker issues the industry faces in general,” he said, listing as examples the cuts, lacerations, and repetitive-motion strain injuries workers suffer, and also noting that the push for fast production is the reason workers are often not allowed to leave the line to go to the bathroom when they need to. “Everything goes back to how many birds they can get through the line [in how short a time],” he said.

Over the last few years, reports from the Southern Poverty Law Center (SPLC), Oxfam America, and others have turned increased attention to the poor conditions facing the workers in the plants that process the chicken Americans purchase from grocery stores, fast food chains, restaurants, and cafeterias. Together, the reports charge the four poultry companies that dominate 60 percent of the U.S. market—Tyson Foods, Sanderson Farms, Perdue Farms, and Pilgrim’s Pride—with the mistreatment of their workers, most of whom are members of especially vulnerable minority, immigrant, and refugee groups.

It’s worth nothing that poor working conditions are not limited to the biggest poultry companies. Zalasar’s employer, Case Farms, which supplies KFC, Taco Bell, Popeye’s, and Boar’s Head, among others, has also repeatedly been called out for its poor treatment of workers—most recently by ProPublica and The New Yorker. 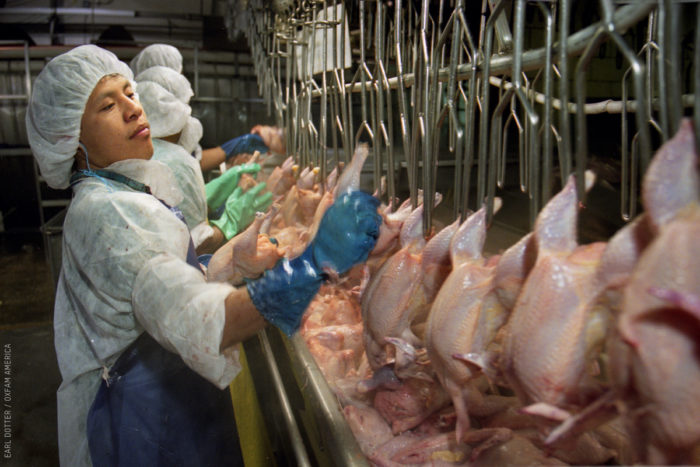 The public eye on poultry worker issues has led to some positive changes in working conditions—including a recent pledge by Tyson to create a healthier workplace. But many worry the Trump administration’s anti-immigration and deregulation stances will reverse the forward momentum.

“A great deal of awareness has been generated in recent years about the problems facing poultry workers, but I’m not sure it’s leading to concrete change,” said Kristi Graunke, a senior supervising attorney with the SPLC. Under the new administration, she continued, “I think we’re going to see decreased enforcement of labor laws, particularly those protecting worker safety, and more power by the industry to shut down safety initiatives and other enforcement actions.”

Can an Industry Leader Turn the Tide?

In the wake of increased poultry plant inspections by the Occupational Safety and Health Administration (OSHA) in 2015 and 2016—which uncovered more than 15 serious safety violations at a Tyson plant in East Texas and resulted in more than $263,000 in fines—Tyson Foods’ new CEO Tom Hayes announced in April the company’s commitment to expanding protections for workers.

Despite potential backsliding on workers’ rights in a new political climate, some worker advocates are optimistic Tyson’s pledge represents the beginning of better treatment across the industry.

Under the new commitments, which the company released in conjunction with Oxfam and United Food and Commercial Workers (UFCW), Tyson plans to reduce the number of worker injuries by 15 percent each year until it reaches zero and increase employee retention by 10 percent each year until it eliminates turnover. It also plans to hire 25 or more poultry plant trainers, continue convening plant safety councils, and publicly share third-party social compliance audits of its plants.

Minor Sinclair, director of Oxfam’s U.S. Domestic Program, sees Tyson’s commitment as substantial progress. “What Tyson did was a real step forward in terms of their corporate culture change, putting some marks in the ground in terms of where they want to go,” Sinclair said.

Sinclair is hopeful the market leader’s attention to working conditions will spread throughout the industry, especially given the tightening labor market. “As Tyson finds themselves in a more favorable position in recruiting employees, other companies are going to have to take stock,” he said. “By virtue of them changing, that’s going to have a ripple effect through the industry.”

While Tyson’s past actions haven’t lived up to its promises, Sinclair said, he feels hopeful the company is committed this time. “Their new leadership is really credible,” he said. “We’re taking their commitment at face value.”

Not everyone feels that way, however. Debbie Berkowitz, a senior fellow with the National Employment Law Project (NELP), a nonprofit working for low-wage workers—and chief of staff for OSHA between 2009 and 2013—does not trust Tyson’s promises. “They said the same things for years when I was at OSHA,” Berkowitz said. 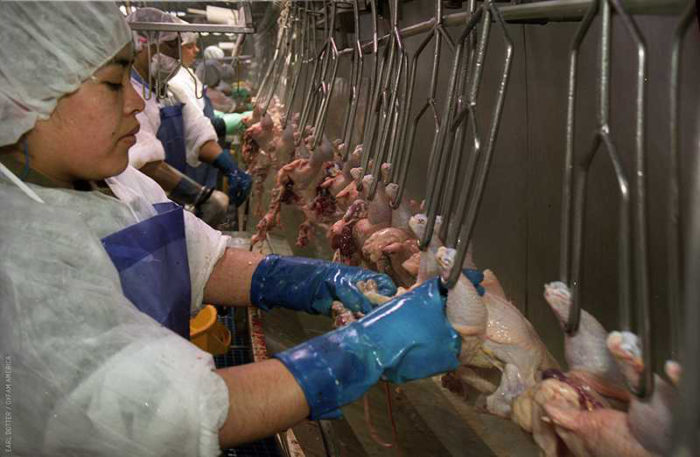 Berkowitz points to the lack of specifics—the absence of immediate changes, effective today—as a cause for concern. “The pledge did not say, ‘Today, we will increase the number of relief workers on the line to allow employees to step away when their hands hurt or they need to use the bathroom,’” Berkowitz said. “It didn’t say, ‘Today, we will put chemicals in enclosed systems so workers are no longer exposed to them.’”

“They [poultry companies] are all low-road employers,” Berkowitz added. “They all treat their workers as if they’re expendable.”

Tony Corbo, a senior lobbyist for Food and Water Watch, still worries for workers, given Tyson’s history and continued complaints he’s hearing, but he’s glad the company has publicly committed to improving. “I am impressed by the fact that they have made a recognition of these issues, but whether they’re going to actually implement these changes still remains to be seen,” Corbo said.

Though some hold out hope that Tyson’s commitments will begin to turn the tide, the poultry industry is already attempting to take advantage of the federal push for deregulation.

“Creating a waiver system to allow establishments to operate without arbitrary line speed limits will put U.S. producers on more equal footing,” Brown wrote, “especially at a time when the United States is seeking to increase its exports of agricultural products.”

Berkowitz and other animal, worker, and consumer advocates disagree. The USDA spent two years studying the effect of line speeds on worker and consumer health before capping the line speeds at 140, and no additional evidence exists to compel them to revisit the decision, Berkowitz said.

“The industry knows this, so they’re not asking the USDA to revisit the decision; they’re saying, under this new administration, you’re letting companies do whatever they want, and we want to be exempt from this rule,” Berkowitz said. “I’ve never heard of that before: That’s like saying wink-wink-nod-nod, we don’t have to comply with the minimum wage.”

Case Farms worker Patricia Zalasar, who spends eight to 10 hours a day shoulder-to-shoulder with her coworkers, knife or scissors in hand, said even the current line speed maximum is difficult to keep up with. “Pulling breasts is a really, really hard job, especially for new people,” she said. One line supervisor, Zalasar said, “screams at me to do the job, but she helps people who have been there a long time.” The speeds feel too fast, she said, and “they don’t have the patience to teach us.”

In addition to the industry campaign to increase line speeds, other signs remain that the industry is not improving its treatment of workers. Though Tyson has cited its intention to improve worker welfare, the three other major poultry players have not yet followed suit. Nor have the smaller ones.

In fact, Case Farms poultry workers list top among their grievances their inability to use the bathroom outside established times, leading some to wear adult diapers to work. In August, Case workers and their allies held a demonstration outside its Morganton, North Carolina plant during which they delivered a letter to Case management requesting a closed-door meeting to discuss the need for a reasonable bathroom break policy, but Case management declined.

Despite the overall gloomy prospects for poultry workers, some advocates find reason for hope. Over the last few years, diverse groups fighting for poultry worker safety—big players like Oxfam and SPLC but also various unions and worker centers, as well as advocates for intersectional causes like animal welfare and food safety—have come together to work for change, Graunke said.

Most advocates see potential in the effort to engage consumers around the issue of poultry workers’ rights. A few years ago, when consumers demanded the humane treatment of animals, companies listened—and began offering “organic,” “antibiotic-free,” and “grassfed” or “free-range” meat.

The American people have not spoken out for workers in the same way they have for animals, Berkowitz said. But if they did, it would make a big difference: “Consumers can have an enormous impact in telling the industry to lift its labor standards,” she said.

Zalasar, too, wants consumers to think about the individuals behind the chicken on their plates. “Consumers don’t consider the sacrifices people make to get the chicken to them,” she said. “Sometimes people just throw chicken out.” Before you toss uneaten chicken in the trashcan, she said, think about the people who endured pain and discomfort to get it to you.

* Zalasar’s name has been changed and her location omitted.