Sean Sherman, co-author of a new cookbook and co-founder of The Sioux Chef, explains why original North American foods and Native foodways are vital to creating a healthy and sustainable future. 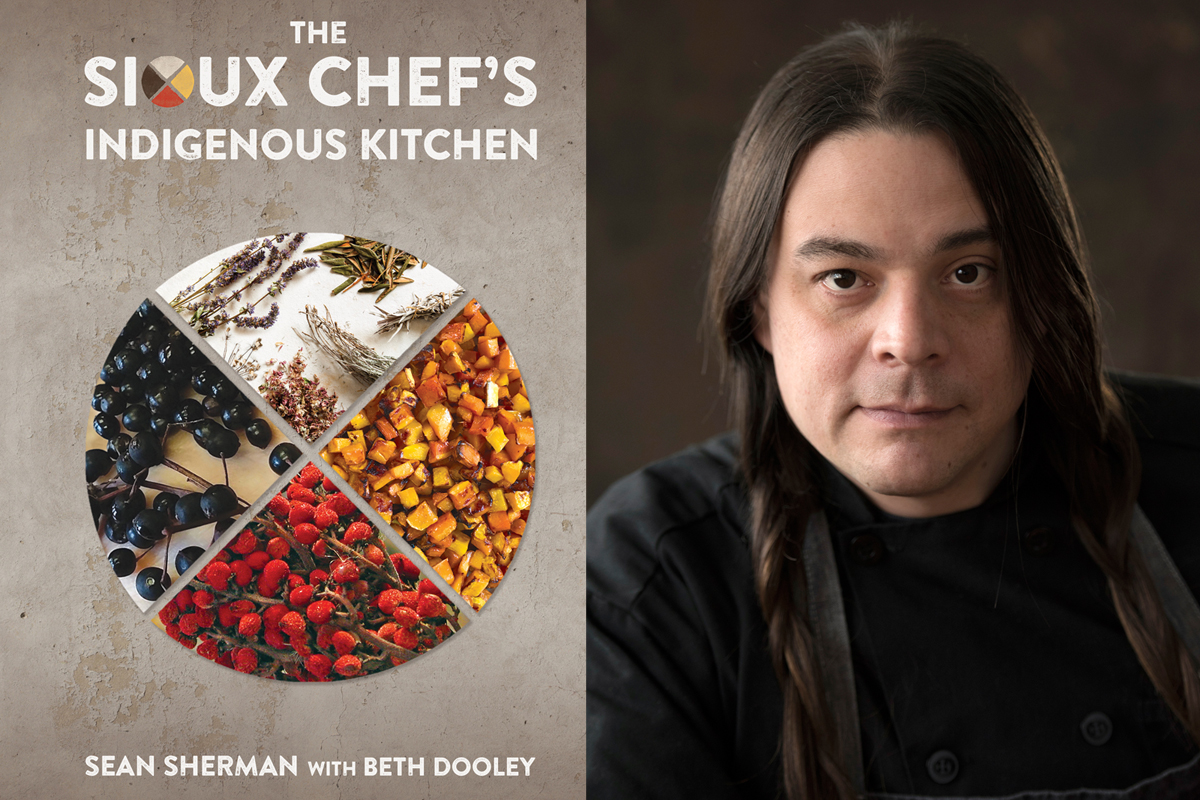 Although hamburgers, pizza, and Coca-Cola are among the foods most often identified as “American” cuisine, the truth is that over-sugared, over-salted, and fat-laden processed fare does not represent the true American diet. The original American cuisine arose from the vibrant and diverse indigenous cultures that thrived across the North American continent for thousands of years before colonization.

European colonists disrupted the indigenous cultures and their foodways—introducing white flour, sugar, dairy, and fat and pushing them away from traditions that honored elders, shared wisdom, and operated in tune with nature. 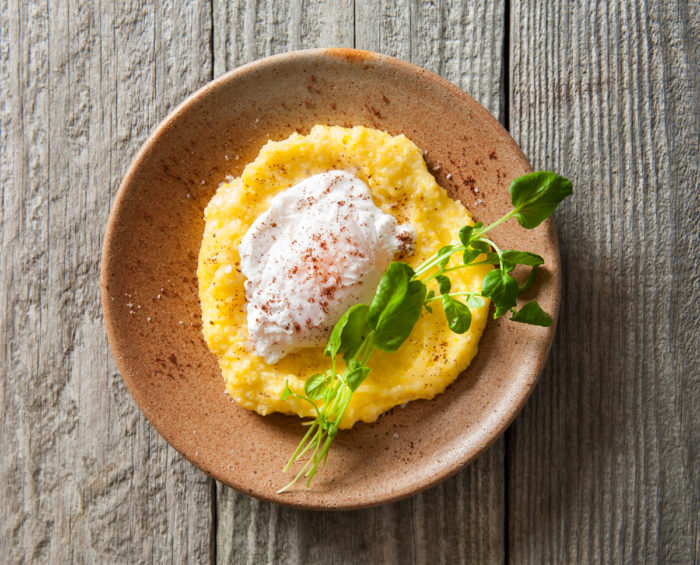 The impact of the colonial diet on natives of the Americas—and also New Zealand, Australia, Southeast Asia, India, and Africa—cannot be denied. Consider the health crises caused by obesity, heart disease, Type 2 diabetes, and tooth decay. None of these conditions existed prior to colonization. Given the massive negative impacts of the colonizers’ diets, we can no longer ignore the culinary backbone of this massive continent.

Aware of this urgency, indigenous communities throughout North and South America are in the process of reclaiming their language, arts, seeds, knowledge, and cuisine. Those of us committed to the indigenous food movement are tapping into the wisdom of our ancestors—and using today’s technology to research and recover much of what was lost or destroyed. By sharing our research, as well as our elders’ wisdom, we are working together to bring something larger than any one of us to the plate. This is not a revolution or reclamation; it is an indigenous evolution. 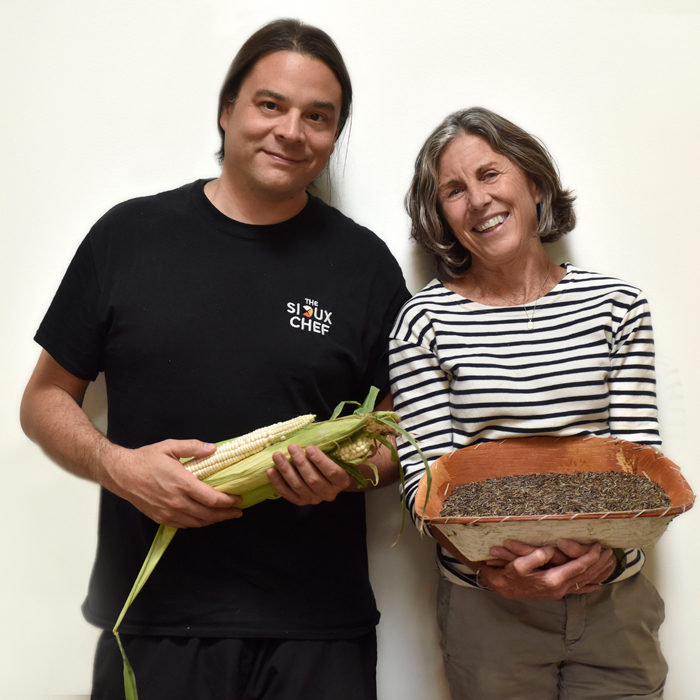 My commitment to this work resulted in the 2014 opening of The Sioux Chef, an indigenous enterprise based in Minneapolis. At The Sioux Chef, a team of chefs, ethnobotanists, food preservationists, adventurers, foragers, caterers, artists, musicians, and food lovers—who are also Anishinaabe, Mdewakanton Dakota, Navajo, Northern Cheyenne, Oglala Lakota, and Wahpeton-Sisseton Dakota—does research, education on our original food systems, nutritional literacy, entrepreneurship workshops, and other capacity-building through the new non-profit the North American Traditional Indigenous Food Systems (NāTIFs). This is in addition to our catering company, the Tatanka Truck, which we recently sold, and the restaurant that we are in development to open through the Minneapolis Parks Board in 2019 on the Mississippi.

Over the last 18 months, I have worked with author Beth Dooley to document our enterprise’s work in our first cookbook, The Sioux Chef’s Indigenous Kitchen, which we are celebrating with a book launch party tonight in Minneapolis.

The book demonstrates that using only regional indigenous ingredients—and cutting out colonial foods completely—equips us to live and eat the way we want to today, regardless of our backgrounds. It’s all-natural, local, seasonal, gluten- and dairy-free, and it is delicious. Among the recipes we’ve included in the book are Three Sisters Summertime Salad with Smoked Trout, Braised Sunflowers, Sage and Rose-Hip Roasted Duck, Bison Tartare, and many more.

Becoming Aware of a Disconnect

The seeds of my mission to revive indigenous foodways were planted many years ago. I grew up on Pine Ridge reservation in South Dakota, where both my parents were born and raised, and I only slowly realized I knew little to nothing of my own heritage and the foods of the Oglala Lakota. 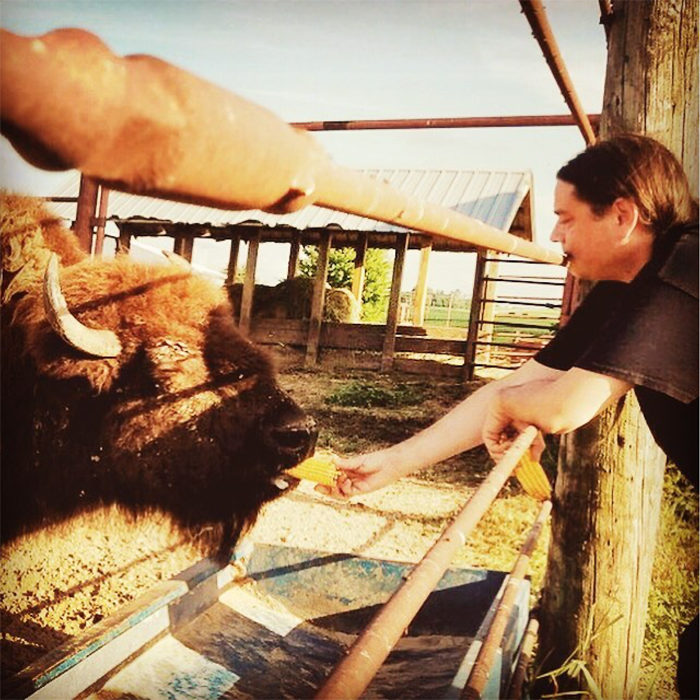 My grandparents were among the first generation to be systematically assimilated to “American” culture—I heard stories of children kidnapped and sent to boarding schools, their hair cut, their language forbidden. How I wish I had been taught more than the handful of recipes I learned as a child—wasna (dried meat and berries), taniga (tripe soup), bapa (bison jerky), and wojape (chokecherry sauce).

When I was 13 years old, I began my working in professional kitchens, and by my early 20s, I had become an executive chef. I mastered the art of Italian, French, and Spanish cuisines until, at the height of my career, I knew I wanted to understand why there were so few Native American restaurants across the U.S. 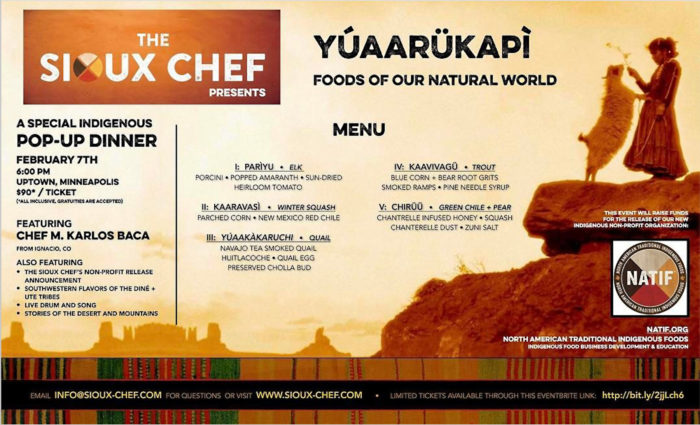 The answer is simple. Colonialism and imperialism decimated indigenous cultures, eradicated indigenous knowledge, and destroyed natural resources. The Europeans stole the land indigenous people used for hunting, foraging, and farming. By removing the people from their foods and replacing their original, healthy diets, the colonists destroyed the lives of the people who had thrived for millennia. Such practices have had a devastating effect on our people and on the earth.

As part of The Sioux Chef, I work with my partner Dana Thompson and a team of 10 chefs, plus a number of indigenous culinary partners across Indian country. Our vision is to create more than a restaurant—it will be a place where we can share our skills, knowledge, and passion, with the goal of spreading our work across the whole of North America. To help us achieve these ends, our new NāTIFS non-profit will focus primarily on indigenous food education and access. Through NāTIFS, we have created a research-and-development team called the “Indigenous Food Lab” to further our own research, document our work, and help us become better educators.

We are also building a replicable model that will place an Indigenous Food Hub in larger urban areas. The hubs will house a regionally unique indigenous restaurant that will not only make the indigenous foods available to the public, but also serve as a training center to educate students in the preparation, cooking, and preservation of indigenous foods. They will also house education centers that offer classes based on the many curriculums we have been developing to help people identify, understand, and apply the knowledge of indigenous food systems. 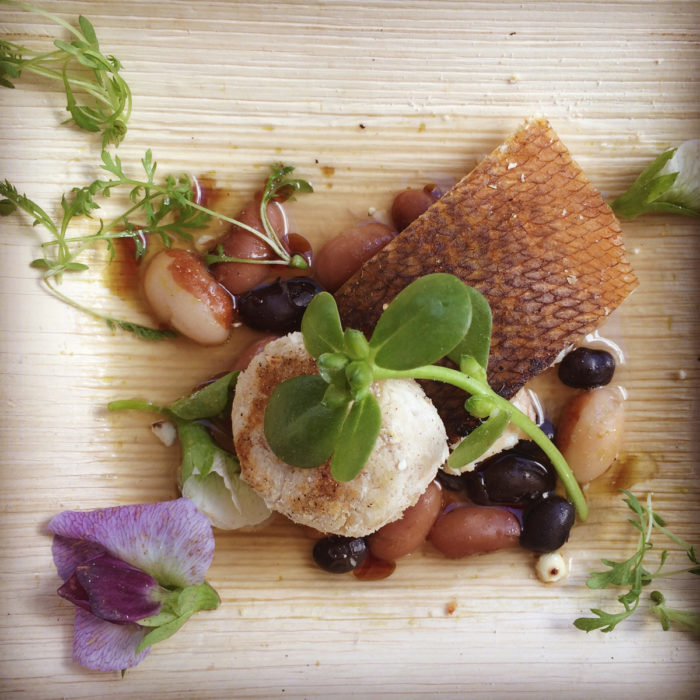 Awakening People to the Lessons of the Past

As my team and I conduct research and come to understand the components of an indigenous food system that includes farming through permaculture, hunting and fishing, foraging for wild foods, preservation through canning, producing salt/fat/sugar, and studying ethno-oceanography, we can both rebuild our cultures and create a food system that showcases and solidifies our true identities. We will realize how unique and special our homelands are and become the answers to our ancestors’ prayers.

Over the past few years, we at The Sioux Chef have connected with a growing network of indigenous chefs throughout the country, which compels me to emphasize that this work is not about me. The book is not ego-driven, about being a chef, or about creativity; it’s about bringing awareness to the vast diversity of all of indigenous cultures throughout the world. It’s about the plants, animals, and techniques that truly define the tastes and histories of the places we were raised. 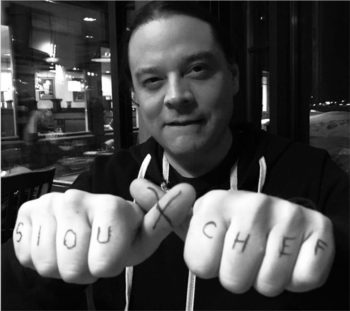 This book is the first step in unraveling colonialism so that we can see the original North American foods and realize their potential. It’s critically important for indigenous communities to produce and eat their traditional foods and for non-native peoples to understand the role they can play in bringing us all together to create a healthy sustainable future.

Through this work spreading knowledge and improving access to indigenous foods, we hope not only to strengthen indigenous cultures but also to awaken people to the lessons of the past and the importance of using them to build a better world for our children and their children. If all goes as planned, the foods of the Americas will never be the same.

Chef Sean Sherman was born in Pine Ridge, South Dakota, and has been cooking in Minnesota, South Dakota, and Montana for the past twenty-seven years. He works as a caterer and food educator across the country through his business The Sioux Chef, based in South Minneapolis. He has earned plaudits and profiles in such venues as National Public Radio, Guardian UK, Saveur, and the New York Times. Read more >