The State of Trump’s USDA: What You Need to Know | Civil Eats

The State of Trump’s USDA: What You Need to Know

Can the USDA continue to do its work amid major reorganizations and minimal appointments and new hires? 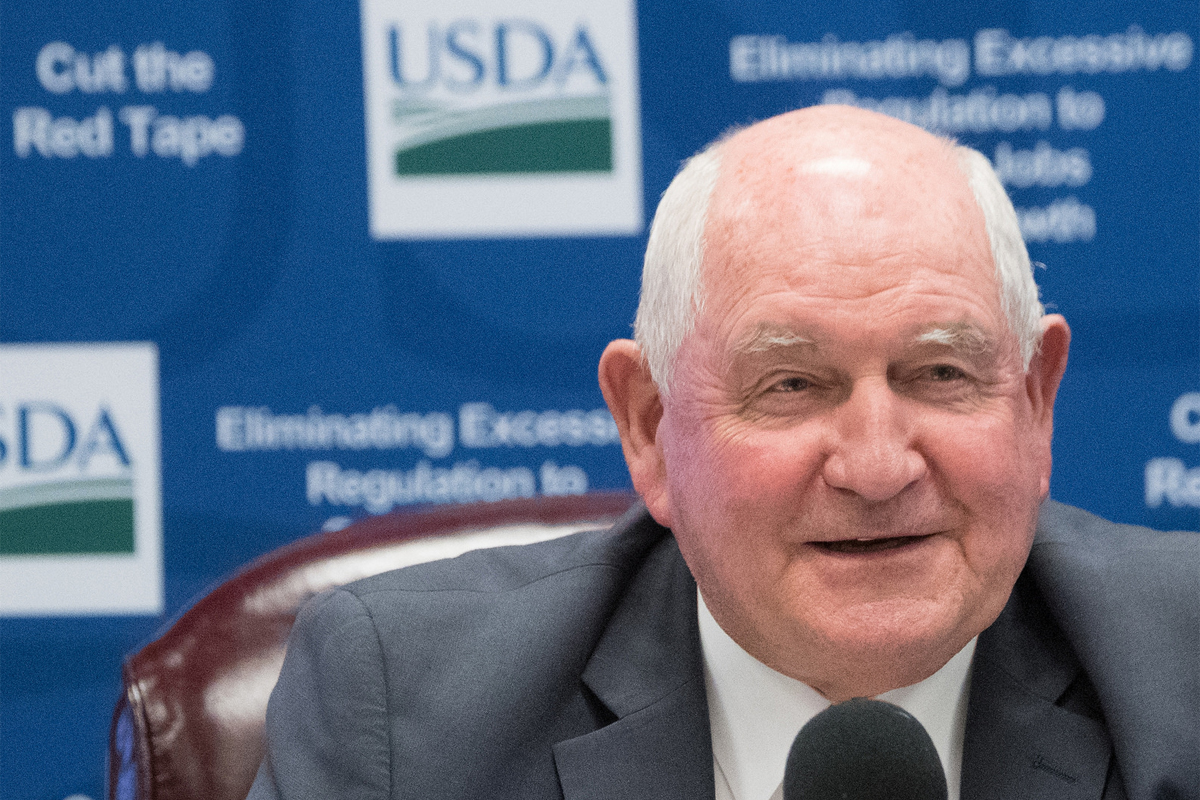 The Trump Administration has been riddled with high-profile scandals since the President took office. But looking beyond the front page reveals yet more controversy, as the President and his cabinet appointees struggle to fill essential roles within the agencies. The Trump White House has lagged far behind the prior administration in this regard. And in the U.S. Department of Agriculture (USDA), many are concerned that notable absences could hamstring the agency’s policy-making efforts dramatically.

Almost from the start, the USDA has been hobbled by the inexperience and inefficiency of the administration. Secretary of Agriculture Sonny Perdue was the final Cabinet member named, and his confirmation took three months to complete. Since Perdue was sworn in, though, the USDA has begun making dramatic organizational changes, while also dealing with some high-profile absences among its top leadership—obstacles that could complicate the agency’s need to pass a new farm bill, advocate for a substantial slice of the shifting federal budget, and maintain its work in rural development, conservation, nutrition, and other essential programs that shape what we eat and how.

Shortly after being confirmed in March, Perdue announced he’d be leading the USDA’s first major reorganization since the mid-1990s. The first stage of the reorganization created a new Farm Production and Conservation mission area, and an under secretary role to support it. The mission area encompasses a wide scope of the agency’s work, including risk management, crop insurance, commodity programs, and conservation.

Perdue’s reorganization also pioneered the new role of under secretary for trade and foreign Agricultural Affairs, one designed to “ensure USDA speaks with a unified voice on international agriculture issues” and promote U.S. agricultural products. 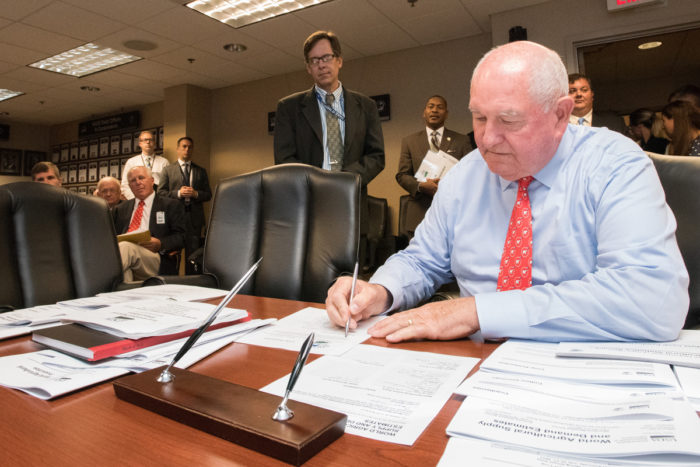 Several trade associations cheered the addition. For instance, the American Soybean Association said in a statement that it and other groups had “long advocated” for an under secretary who would allow the USDA to become an important player in developing Trump’s “big ideas on trade.”

The changes that most riled advocates for rural communities—who are credited with giving Trump the support he needed to win—are Perdue’s many changes to the Department’s rural development efforts. He created a new assistant to the secretary in rural development role after receiving vocal pushback from 570 advocacy groups when moving to eliminate the role of under secretary in the department and defunding the USDA’s Rural Development mission area altogether. (The new role sits outside the traditional USDA hierarchy and won’t need to be confirmed by the Senate.)

Anna Johnson, policy programs associate at the Center for Rural Affairs, says that the new assistant secretary role doesn’t appropriately replace a Senate-confirmed under secretary for rural development. If rural development doesn’t get the same treatment as other mission areas in this regard, she says, “we don’t get that chance to get a sense for who the new leader of that enormous portfolio is going to be.” And if rural development doesn’t remain a USDA mission area, Johnson wonders how rural leadership will retain its place at the table.

Secretary Perdue announced the second stage of the USDA’s reorganization in September, including moving a program of the Food Safety Inspection Service (FSIS) under the newly-created Trade and Foreign Agricultural Affairs mission area, and creating a new Innovation Center within the Rural Development mission area. 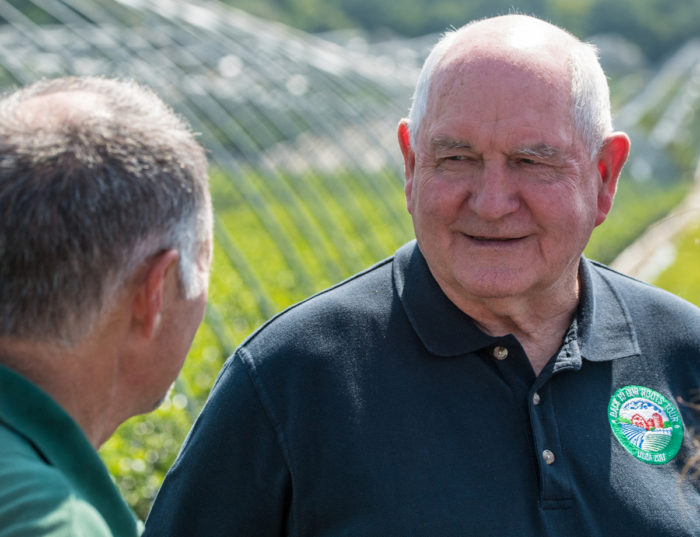 Greg Fogel, policy director for the National Sustainable Agriculture Coalition (NSAC), says that this type of extensive reorganization is “not typical” of an administrative transition. He says that one main driver of the reorganization is likely President Trump’s January executive order on reducing regulation. But, he says, “they’re not releasing many details, so it’s hard to know exactly what’s going on.”

Perhaps most controversially, the reorganization moves the Grain Inspection, Packers, and Stockyards Administration (GIPSA), formerly housed across several programs, to the Agricultural Marketing Service (AMS). This move has caused concern among many food and farm advocates because the two programs have historically served to counterbalance one another.

GIPSA, in part, enforces a piece of antitrust legislation that is meant to uphold competition in the livestock industry. AMS, on the other hand, is the USDA’s marketing and promotion office and runs commodity checkoff programs, which support marketing and promotion for individual commodities funded by a mandatory payment that commodity farmers pay to the USDA Checkoff programs are controversial among farmers, some of whom argue that only the biggest farms benefit from the type of generic advertising funded by checkoffs. (Think: “Got Milk?” and “Beef: It’s What’s for Dinner.”)

J. Dudley Butler, who served as administrator of GIPSA from 2009 to 2012, says that reorganizing the agency is “just a disaster.” He argues that since AMS programs have promoted the products of large-scale, industrial farming companies—the same companies, like JBS, Cargill, and Tyson, who control a greater and greater market share in the livestock industry—their ability to regulate competitive markets is limited. “How can you work with industry, work with the packers, and regulate the packers at the same time?” Butler asks. “It just doesn’t make any sense at all.”

Barbara Patterson, the director of government relations at the National Farmers Union (NFU), notes that another consequence of moving GIPSA to AMS is eliminating the role of GIPSA administrator, who serves as an “advocate within USDA” for farmers and competitive markets.

[Update: Today, the USDA announced that it would withdraw the interim Farmer Fair Practice Rules, which were intended to provide small farmers with some protections against consolidation and monopolies in the beef, chicken, and pork industries. Some farm groups supported the rules, while others applauded the just-announced decision to eliminate them.]

Who’s Picking Up the Phone?

Behind the scenes at the USDA, still-vacant political appointee roles and other staffing issues have slowed the Department’s work. Advocates report that without high-level administrator and Under Secretary roles filled, communication between the USDA, the White House, and Congress has been challenging. “When the Hill goes to USDA for technical assistance,” says Patterson, “those responses can be slow. They’re getting the runaround.”

Among the political appointee roles that have been filled, two trends have emerged: prior work experience on the Trump campaign, and prior employment in the agribusiness sector. 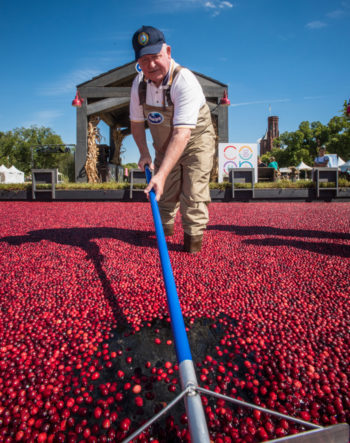 Sonny Perdue borrows some waders from Ocean Spray Cooperative at their demonstration cranberry bog on the National Mall in Washington, D.C., on September 29, 2017.

Politico found in a recent investigation that 22 of 42 political appointees at the USDA had some Trump campaign experience, and few of them had prior experience in agriculture—or the credentials required for the positions they hold. For instance, Sam Clovis, the President’s controversial pick for Chief Scientist at the USDA, was chief policy advisor for Trump’s campaign, but has no science background himself. Stephen Vaden, Trump’s recent appointment for General Counsel at the USDA, was part of the Trump transition team.

Since Secretary Perdue was confirmed, only a handful of political appointees have had hearings. Deputy Secretary nominee Steve Censky and Ted McKinney, who was nominated for the newly-created under secretary for trade and foreign agricultural affairs position, testified before the Senate Agriculture Committee on September 19 and were confirmed on October 3. Censky has been CEO of the American Soybean Association for two decades, and McKinney worked for Dow Agrosciences before becoming the director of the Indiana State Department of Agriculture in 2014.

Meanwhile, many top-level positions are still left unfilled, including under secretaries for food nutrition and consumer services, and natural resources and environment, as well as assistant secretaries for administration, civil rights, and congressional relations. The USDA did not respond to a request for more information on the status of those nominations.

NSAC’s Fogel says that the vacancies in leadership positions are creating a roadblock for career staff, who aren’t necessarily “willing and able to make high-level decisions.” He says there isn’t yet “a clear indication that this is slowing down the rule-making process and other administrative functions,” but that the absence in leadership is creating “communication problems between USDA and other parts of the administration” and causing “quite a bit of confusion.”

“We need more employees at USDA,” says NFU’s Patterson. “We need the politicals to get into place. They’re working on it, but it’s slow—and meanwhile, the farm bill is not slowing down at all.”

Secretary Perdue said in his September 7 announcement he is committed to reducing “redundancies” in central staffing roles like human resources, property management, and IT, and to creating further “operational efficiencies.”

As debates and hearings on the 2018 farm bill continue, filling the lingering vacancies at the USDA is only becoming more pressing. Fogel says that each presidential administration has had its own way of engaging with the bill, from crafting its own extensive policy proposals to barely engaging at all. The USDA traditionally plays a crucial role in advising Hill staff on how to shape the bill. And yet there is still no nominee for assistant secretary for congressional relations, the office that manages the USDA’s relationship with Senate and House agriculture committees, among others.

Patterson says that the vacancies in political appointee roles “puts a lot of pressure on the secretary” to represent the USDA’s interests to Congress on his own. She notes that having experienced high-level officials in place to provide technical assistance and to clarify the effects of different policies is essential for a smooth farm bill process. “Having the right voices at USDA advocating, or at least providing [an] overall understanding of what potential outcomes could be, is an important role,” she says. “It just makes it harder when you don’t have politicals in offices.”

Meanwhile, several major USDA rules remain in a holding pattern. In January, the administration finalized the Organic Livestock and Poultry Practices rules, which codify increased animal welfare standards for organic livestock. But it has delayed implementing the rules until at least November. The Farmer Fair Practices rules, written under the Obama Administration and meant to be implemented in April, were also delayed until October.

Photos courtesy of the USDA.