Syrian Bakers Fight to Maintain a Tradition of Excellence

Despite a wheat crisis, a raging war, and saga of violence, these bakers are bringing their sweets to the world. 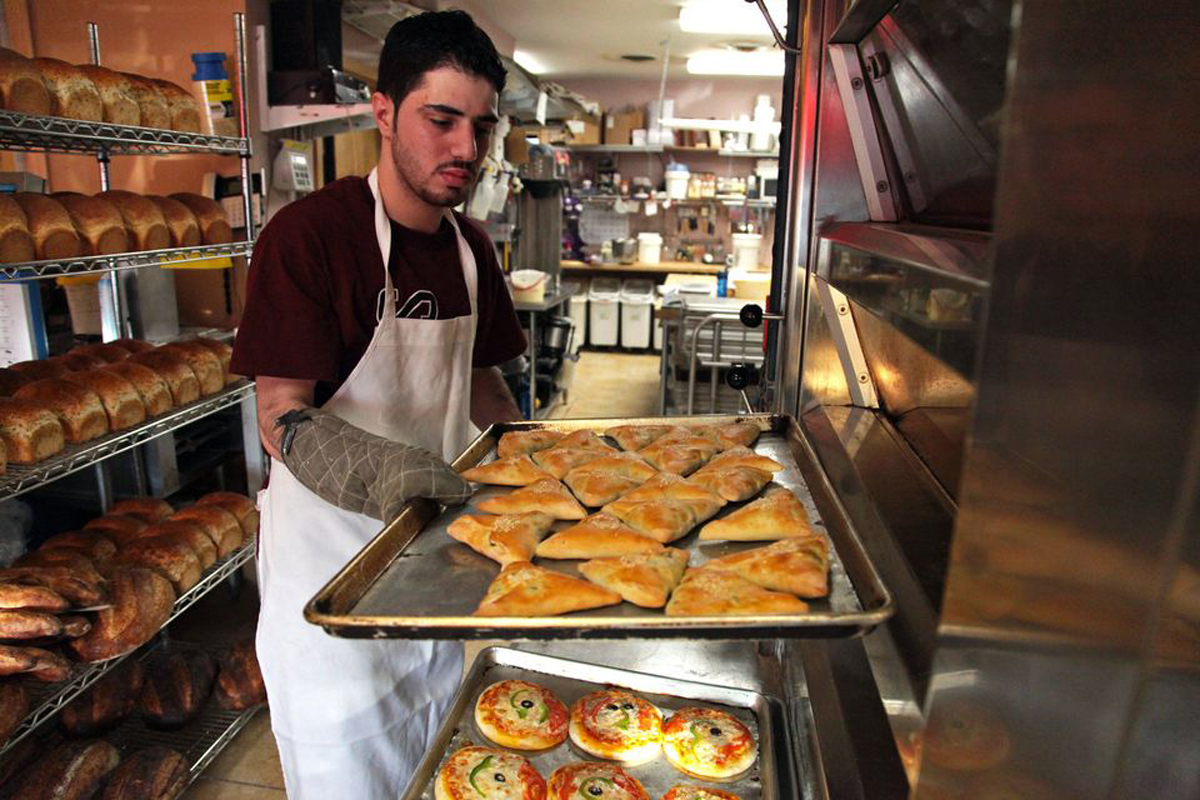 Mohamad Arnous, a Damascus-born Syrian refugee living in Jevnaker, Norway, recently found himself unemployed despite his expertise in whipping up everything from baklava and maamoul to Syrian flatbread and cakes.

While cooking in a Syrian restaurant in Oslo, Arnous would often make Syrian cake samples and give them away for free, hoping to spread love for his culture’s sweets. But he found that his daily travel expenses from Jevnaker to the restaurant were too large. He’s eager to share the craft his uncle taught him at a bakery in Damascus, but Arnous does not yet have the space nor the money to do so.

And he’s not alone. Without permanent kitchens physical baking spaces, Syrian refugees often struggle to make a living abroad with their native culinary skills and traditions. Molhem Tayara, a 21-year-old a baker living in Kalamazoo, Michigan, works in a Lebanese restaurant to make ends meet. Tayara, whose specialties include flatbreads called manoushe za’atar and lahm bi’ajeen, honed his skills over four years working at a Syrian bakery in Jordan. Despite vigorous accolades of the Kalamazoo food community, Tayara can’t afford to open his own bakery. But he’s determined to continue Syrian baking traditions. 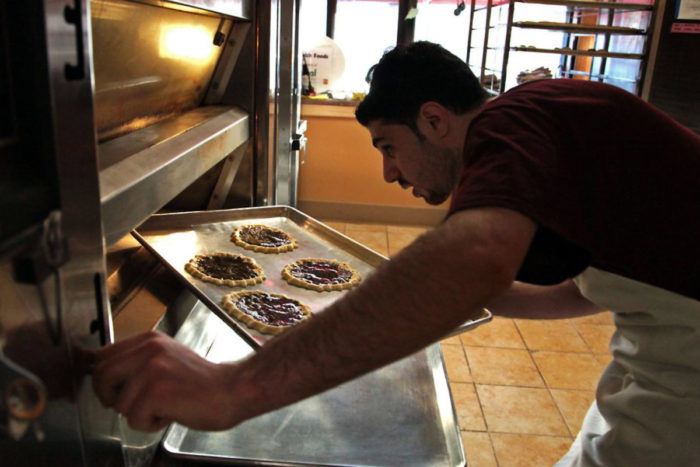 “The flatbreads are important to me and other Syrian people because our grandfathers left them to us to always remember our culture,” Tayara said, adding: “It’s not easy to save all the secrets.”

One quandary for refugees like Arnous and Tayara is sourcing traditional ingredients, either from Syria or other Middle Eastern nations. The protein-packed Syrian whole wheat conventionally used in flatbread has been diminished by Assad’s strategic bombing and is expensive to purchase abroad, so refugee bakers often find themselves using typical North American wheat flours. “The wheat grown and produced in Syria has better quality than the imported wheat,” Arnous said. “When you use imported, you need to use more flour to get the same result.”

If you want to destroy a culture, the earth-scorching Romans knew, destroy not only its armies, but also its food sources and traditions. The story of the Syrian wheat crisis is a long, complex saga of systematic violence, governmental mismanagement and ecological crisis. Global warming contributed to the Syrian Spring, but agricultural analyst Franchesca de Chatel argues that it was not the main factor, and that the government’s agricultural mismanagement and rapid economic liberalization predated the drought.

The downfall of the crucial crop began long before the Civil War, with Assad’s desire to capitalize on wheat exports, soil-depleting agricultural policies and over-reliance on rainwater. The soil, depleted and salinized by monocultural planting and inefficient surface-watering irrigation policies, was further ravaged by a climate-fueled drought from 2006 to 2011. Farmers turned to well water to irrigate their crops and depleted groundwater sources, leaving fields dry. A estimated 1 to 1.5 million farmers, newly unemployed, migrated to the urban slums of Syria.

Once the war began, food security plummeted as wheat fields were bombed, rural irrigation canals were destroyed and fuel for irrigation pumps became hard to come by. The Food and Agriculture Organization of the United Nations reported in 2013 that wheat and barley production “dropped to less than 2 million tonnes last year from 4 to 4.5 million tonnes in normal years,” but production wasn’t the only problem. Wheat needs to be milled and distributed, but few farmers had means of taking their product to market.

When the essential flour did make it to Syrian bakeries, bread lines were systematically bombed, often shortly after they were announced. Multiple sources including Human Rights Watch, The New Republic, The Telegraph, CNN, Syria: Direct and Middle East Research and Information Project have all reported the bombings of Syrian bakeries by Syrian and Russian governmental forces. In December 2012, a Sukhoi-22 ground attack plane killed at least 60 Syrians waiting for bread in Halfaya. In January of 2016, Russian planes bombed a British-funded bakery in Hazano, killing eight. The symbolic message imparted a new level of terrorism: “We will starve the rebels into submission.” Bread prices tripled from 2011 to 2014, but waiting in a charity line for free bread wasn’t safe either.

Since then, even as some parts of the Fertile Crescent came back to life, analysts say it may take decades for food security to restabilize in Syria. Today ISIS controls what remains of the agricultural land in the northern part of the country. Although the Syrian government announced that it would produce 2 million tons of wheat this season, some experts say that the country will be lucky if it produces enough to feed its dwindling population—let alone have anything left to export.

Meanwhile, many Syrians are struggling to continue their vital traditions abroad. For Arnous, that means flatbread. “(The Syrian flatbread) has protein and all Arabs eat it; it is our tradition and culture. We need it and couldn’t go without it.” Now, he’s also considering teaching others his craft. “I want my son to cook like me,” he says.

Ismail and Rasoul Alsalha, the brothers behind the Toronto-area Syrian bakery Crown Pastries, are another refugee family working to keep Syria’s sweets tradition alive. Their two younger brothers, ages 14 and 21, are still learning the craft of Syrian baklava, of which Crown Pastries sells nine different kinds. “Our baklava is not like the Greek or Turkish baklava,” Ismail says. “We use more nuts inside, the dough is very thin, and the baklava is not too sweet.” 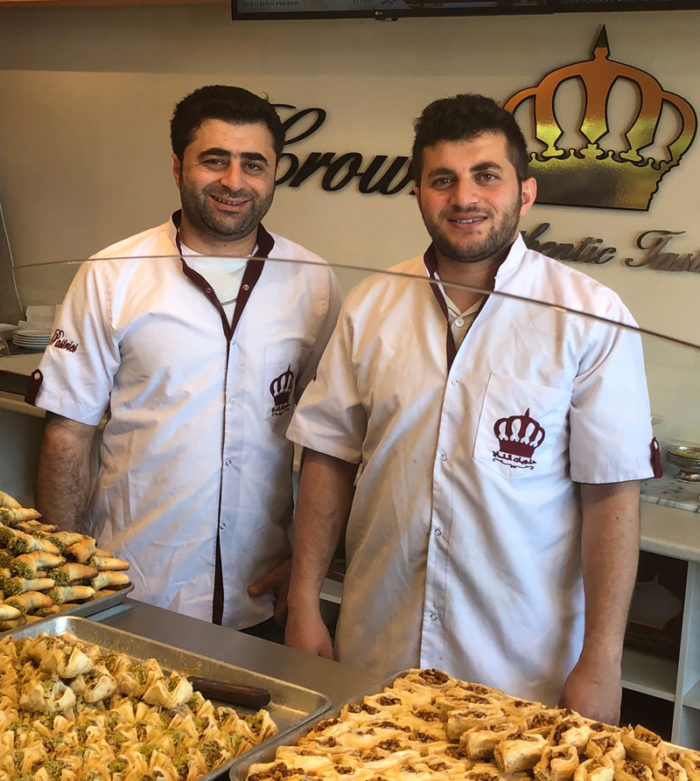 Had the family been able to stay in Aleppo, the younger Alsalha sons might have learned baklava’s tricky ways as Ismail and Rasoul did, from their grandfather, who had a bakery in Aleppo for 32 years. When the family fled to Canada in 2009 under refugee status, they were forced to abandon the bakery. Then, in 2015, they opened their own Syrian bakery. Now, the two younger boys are still focused on school, but the Alsalhas have big plans to expand the physical space and cultural scope of the family business and bring their younger siblings into the fold.

“We’re going to expand the bakery so we can do classes where Syrian kids—or anyone—can come and we will teach them how to make baklava,” Ismail said.

Rasoul recollected the importance of baking to the Alsalhas as children. “In the summertime we used to go to our grandfather’s bakery full-time,” he remembers.

The quest to keep the tradition of Syrian baking alive is being mirrored across Toronto at Newcomer Kitchen, a nonprofit pop-up kitchen located in an upscale deli. Each week, one of the 60 Syrian refugee women of Newcomer Kitchen cooks a meal that is sold online for pick-up or delivery, and the profits are shared with the cooks. From s’fouf—a golden turmeric, anise, vanilla, coconut, and pistachio semolina cake—to qataief, dumpling-like pastries stuffed with nuts and cheese then drizzled with syrup, the Syrian chefs of Newcomer exhibit incredible skill. Newcomer offers an extensive list of classes that pass cooking and baking skills on to other Syrian-Canadians as well as to the community at large. In the process, the Syrian refugee women are learning from one another.

“The bonding that’s happening in the kitchen is really crossing over intra-cultural barriers,” Newcomer Kitchen director Cara Benjamin-Pace said. “There are divisions in Syria, so those friendships, solidified through baking, help overcome those differences.” 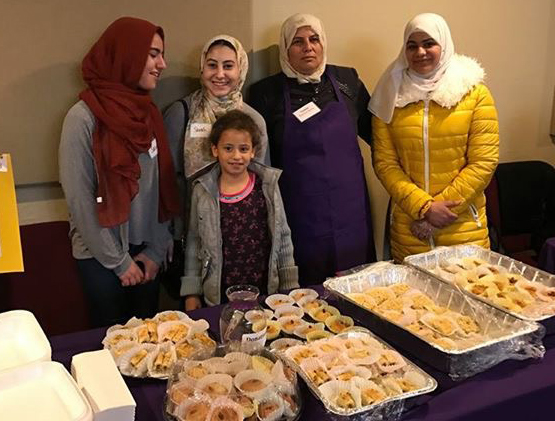 Benjamin-Pace often pairs an older matriarch more experienced in baking with a younger Syrian woman. “Often families are separated, with mothers unbonded from daughters,” she said. “These intergenerational baking lessons give them a sense of family when they are far away from home.”

When special treats are being baked, Benjamin-Pace orders costly Turkish flour that is similar to the Syrian flour the women are used to. An experienced baker, Benjamin-Pace has also been teaching them how to adapt to the usage of various types of North American flour, including pastry flour, cake flour, bread flour, sourdough starter, and all-purpose flour.

In Phoenix, Arizona, an organization called Syrian Sweets Exchange Phoenix has received funding from the International Rescue Committee to start a commercial space where future generations of Syrian-Americans will learn the art of baking. The group, which has brought 25 Syrian women together to bake desserts, also helps the women obtain food handler’s licenses and stalls at 10 of Phoenix’s weekly farmers’ markets.

Nancy Speidel, the volunteer co-organizer of Syrian Sweets Exchange, explained how important sweets and pastries are to the participants. “Syria is known for its sweets, and in the Middle East, it has one of the highest standards of sweets,” she says. “Since they already have a reputation of being the best of the best in the region, they’re very proud to bring those sweets here and showcase them.” 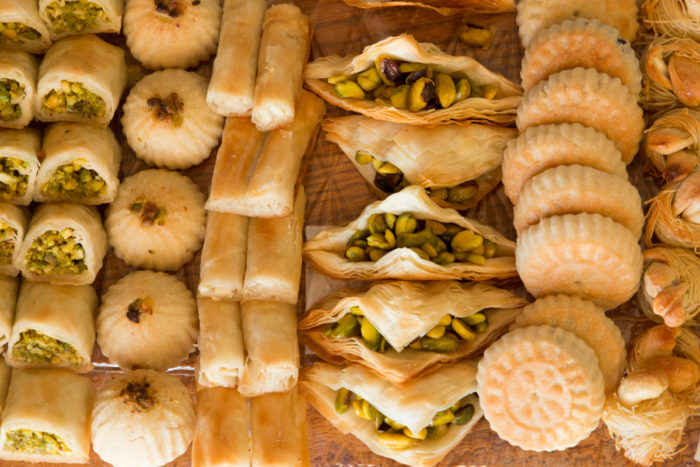 Tan Jakwani, the other volunteer co-organizer and the child of Vietnamese immigrants herself, emphasized the networking potential of a physical space for the Syrian bakers. “We learn about cultures through foods and I really want to help our new Syrian immigrants integrate into Phoenix and make it a stronger, richer city,” she said.

When its new cooperative commercial kitchen opens, Syrian Sweets Exchange will sell the sweets to retail locations and offer baking classes, bringing in further income for the women. The goal is to help make the women become self-sustaining entrepreneurs, adds Speidel. “We’re going to give them a facility and they can make a small business and, eventually, a living out of this.”

Dakota Kim is a freelance journalist whose work has appeared in the Los Angeles Times, the New York Times, NPR, and elsewhere. Read more >