The veteran nutrition director who reformed Detroit's school food takes on a new challenge in the aftermath of Hurricane Harvey. 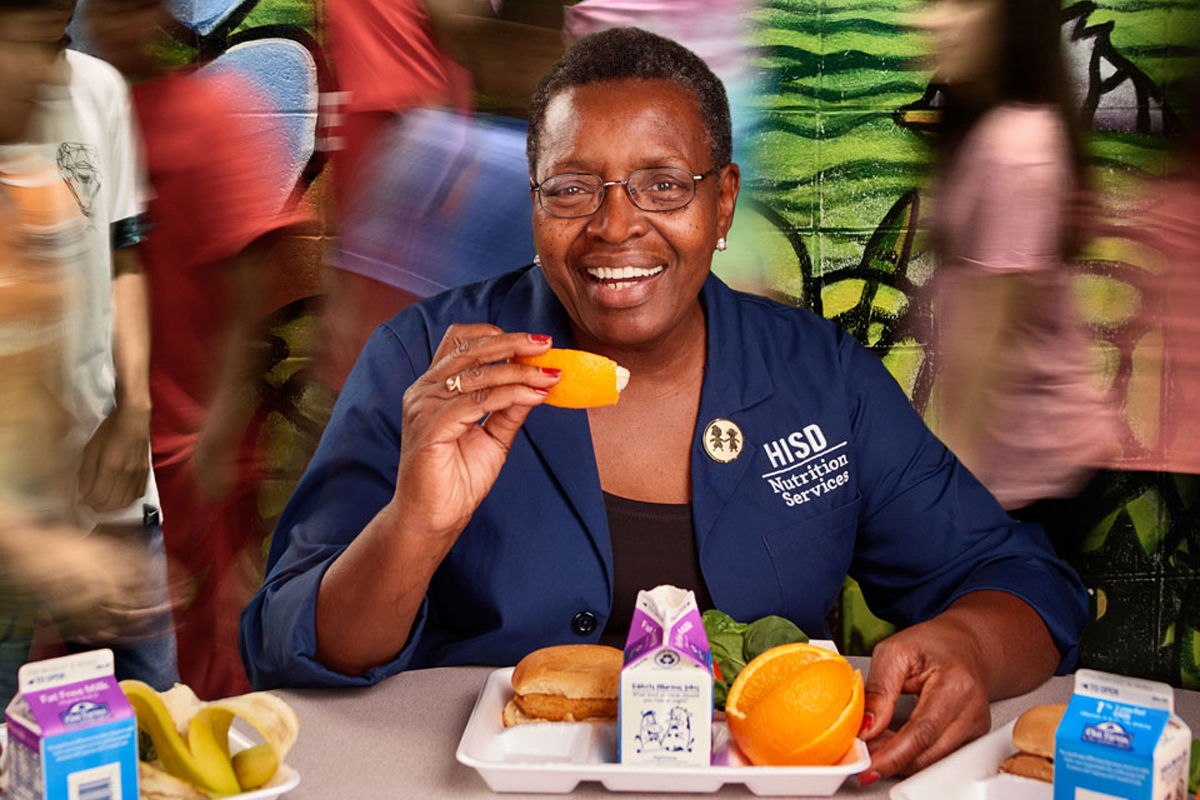 Betti Wiggins has been working to feed urban children—consistently, systematically, and healthfully—for going on 30 years. She’s credited most recently with turning around Detroit’s inefficient public school food program as director of the district’s office of school nutrition. About four month before Hurricane Harvey wrought unprecedented destruction on the Gulf Coast, Wiggins started a position as the Houston school district’s officer of nutrition services, where she planned to continue her decades-long mission.

Wiggins moved to Houston in April 2017 and was gearing up to serve the 218,000 children in the district’s 289 public schools when Harvey hit and introduced some unexpected challenges. With many school buildings damaged and flooded and others being used as emergency shelters, schools superintendent Richard Carranza delayed the opening of the hardest-hit schools, with some schools opening on September 11, and the rest opening in phases throughout the month.

As of September 21, most Houston schools had opened their doors, and the school district is providing free meals to all students, all school year. The result, Wiggins said, is that “these meals allow people to handle the things that matter as opposed to worrying about where to go for lunch or what to send with their student.”

Wiggins is honored in the September/October issue of EatingWell magazine as a Food Hero for her work “addressing hunger to make a difference in kids’ lives.” In Detroit, Wiggins had introduced a free three-meal-a-day program and a garden-to-cafeteria initiative, abolished junk food, and began sourcing produce from local farms—all in the interest of serving more than 55,000 school-aged children, a whopping 87 percent of whom qualify for free-or-reduced-price meals. In Houston, in the aftermath of Harvey, she was optimistic she could get proposed programs in gear-eventually.

She took a break from her work to share her philosophy on nutrition, her path to her current position, and her plans for the future.

What do you think about being hailed as a “hero?”

I prefer the word servant, in that I work for these kids. It’s not heroic to simply fulfill my obligation to children; I’m just doing what you’re supposed to do if you’re committed to feeding to children and are interested in them as real live human beings.

Did you experience hunger yourself as a young person?

Absolutely not. I grew up on a farm in southern Michigan where we raised our own food. We were not big land barons, but we had a garden, pigs, chickens, and cash crops like corn and soybeans. But I got acquainted with hunger. I became aware of the Black Panthers pulling kids off the street and feeding them, which was the forerunner to the school breakfast program; [they knew that] a hungry child cannot learn. Studying nutrition [at Wayne State University in Detroit], we would do public health practicums, working with the elderly who had no Social Security and were eating Alpo [dog food]. So, I had an awareness of hunger. And I grew up with the idea that you help people.

How did you initially come to work in schools and with kids?

I had been working in the healthcare sector as a hospital food director, and I got disenchanted. So, I applied to be a sub in Detroit’s school lunch program, washing pots and pans, putting up stock, learning what school lunch is all about. Eventually, Marriott Corporation hired me to be a food service director. They taught me the business side of nutrition, customer relations, ethics—it was good training. Eventually, I left Marriott and went to Southeast Washington, D.C. I couldn’t believe what I was seeing in the school lunch program—food with worms in it. I thought children were being used for adult purposes, and I pissed a lot of people off to take care of children there.

When you returned to Detroit, to its school system, you implemented multiple, major changes in a relatively short period of time. How did you manage that?

Marriott taught me about forming coalitions to accomplish a goal; how do both of us get what we want? To create a school garden in a vacant lot, I said, “Who do my partners need to be?” I need a university if we’re going to do research and grant writing; I need an extension service if we’re going to learn to grow food; I need a healthcare provider if our emphasis is going to be on health; and I need a not-for- profit that’s already out in the field. I just sat down and started engaging the people I needed.

What benefits have you seen out in the field to feeding hungry children nutritious meals?

Detroit has a needy population, and those parents are grateful I cared about their kids. There’s a real trust between a parent and a school lunch lady. The first thing a parent says to a kid who’s getting off the bus, after you look at them and see if they’re intact, is, “Are you hungry?” Food and nourishment are the first ways we show caring for kids. I related to women so well because I’m a single mom myself and know how lucky it is that I made enough money. A lot of women [in Detroit] did not have the opportunities I had.

What will some of the challenges of Houston be for you?

Houston is so much like Detroit in so many ways—it has the same kinds of issues with lack of food inclusion—except it’s not plain broke. In Detroit, I started building that program by myself, creating gardens out of the back of my car with bricks I stole from abandoned houses. I didn’t have anybody in Detroit to partner with except foundations. Here in Houston, I’ve got Exxon and all these different resources.

I have four times the number of students here, but I also have four times the number of employees. Here there’s a staff with skills, eagerness, and readiness; Houston came for me and provided me with everything I need. I can sit down and talk about ideas and assign things to people. I have a food manufacturing facility, the largest for a school district in the country, and I’m going to make my own bread, cook my own entrees—I’m working on making a cereal bar. I’m trying now to put a garden program together. I’ve got a culinary staff to put good food on kids’ trays; they do not lack skills or desire here. We’re gonna get it done, as they say.

How are your proposed programs faring in the wake of Harvey?

Hurricane Harvey has certainly impacted our program. In addition to sustaining damage at our production facility, quite a few of our vendors sustained damage [as well]. This, in turn, prevented them from filling orders as planned. Our milk deliveries did not begin until [September 13] and produce is still limited. Other vendors are tackling the problem of product availability. While inconvenient, this is to be expected after a natural disaster of this scale. We’ve had to alter our menus and include substitutions for items we planned to receive.

Our first priority will always remain ensuring our kids have food that will fuel their learning. That won’t change. We remain committed to our mission of serving good food that is simple, wholesome and nutritious. We’ve been able to reach those goals by receiving a waiver from the Texas Department of Agriculture, which allowed us to [offer the meals for free].

Can other “lunch ladies” apply what you’ve done to their own districts?

What I’m doing is scalable. You just have to decide what you’re committed to. I might not come [personally] from a hungry-kid paradigm, but I come from the idea that we need to feed all equally, as a right.