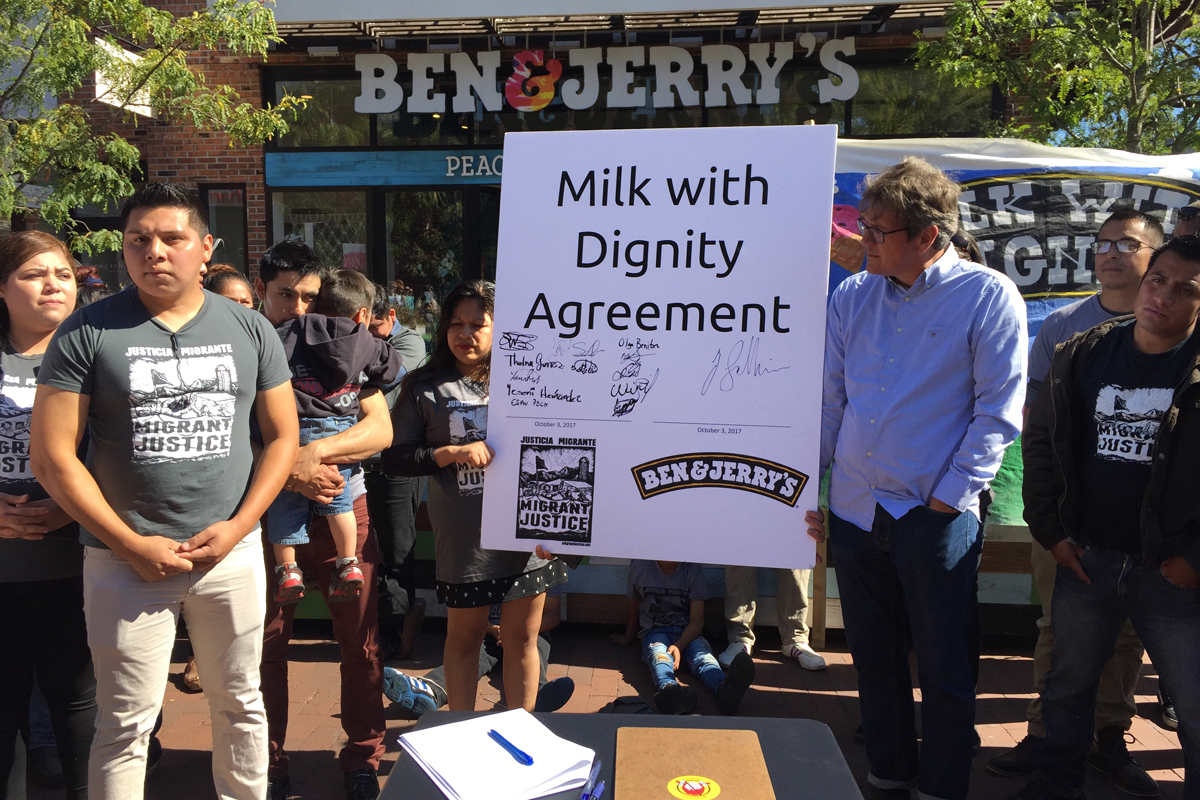 A worker milking cows in a Vermont dairy barn might seem to have little in common with one picking tomatoes in a Florida field. But effective this week, both enjoy the benefits of a system of labor protections that President Bill Clinton called “the most astonishing thing politically in the world we’re living in today.”

Jostein Solheim, chief executive of the ice cream company Ben & Jerry’s, which was built on a platform of social responsibility, yesterday signed a “Milk with Dignity” agreement with representatives of the farmworkers’ rights group Migrant Justice. The signing occurred on a sunny afternoon on a table set up outside Ben & Jerry’s flagship store in Burlington, Vermont, where the company was founded and is still based. The agreement, which is based on the Fair Food Program put in place for tomato workers in Florida by the Coalition of Immokalee Workers (CIW), came after three years of on-again, off-again negotiations. Those negotiations appeared to have stalled as recently as this past June.

“This is a first for the dairy industry anywhere in the world,” said Jostein. “Innovation is challenging, but if we get this right, it’s a win, win, win for workers, farmers, and buyers.” Currently, the company buys milk from about 80 Vermont dairies, and plans to source every drop from Milk with Dignity farms in the coming years.

Under Milk with Dignity, workers who earn less than Vermont’s official living wage (which works out to between $10.60 and $12.41 an hour, depending on the county) will receive bonuses of $50 a month. The program will also assure that they get five paid sick days each year, adequate breaks during work hours, and at least eight consecutive hours off each day. It guarantees workers adequate housing, and does not allow rents deducted for lodging to cause workers’ take-home pay to fall below the state minimum wage of $10 per hour. There is zero tolerance for forced labor, unlawful child labor, and sexual and physical violence. Milk with Dignity establishes a third party-monitoring system to address grievances and ensure compliance, codified in a legally binding agreement, and participating farms will receive a bonus for their milk from Ben & Jerry’s to cover the extra expenses of complying.

Vermont likes to project a greener-than-thou image of red-painted, gambrel-roofed barns and happy Holsteins belly deep in lush pastures. In reality, the state’s $2.2 billion dairy industry is dominated by 800 large farms, most of which keep hundreds of cows in small, individual stalls inside warehouse-like structures with no access to pasture.

The state’s roughly 1,500 mostly Hispanic, mostly undocumented, dairy workers sometimes live in the very barns where they milk the cows. They rarely venture out because they fear deportation. A survey conducted in 2014 revealed that 40 percent of workers had no days off and were paid less than minimum wage. One-third put in seven hours or more at a time without a break, even to eat. One-fifth had their pay illegally withheld. And 15 percent complained of overcrowded housing and inadequate heat during Vermont’s freezing winters.

A critically important aspect of the Milk with Dignity program is that its code of conduct for farmers was devised by the workers themselves. Under the program’s policy all dairy workers will receive detailed training on what their rights are, so they will immediately recognize violations. Workers will also have access to a toll-free complaint line monitored by an independent, third-party nonprofit organization with the power to force dairies to take corrective actions. Dairies that fail to do so will face the prospect of losing Ben & Jerry’s as a buyer for their milk.

At the signing ceremony, Enrique Balcazar, a dairy worker and Migrant Justice organizer, proclaimed, “This is a new day for dairy, a new day for the human rights of farmworkers. But this is just one step. We are committing to keep pushing forward.”

In pushing forward, the group will be following in the steps of the CIW’s Fair Food Program. Over the past six years, Fair Food has brought about dramatic improvements in the Florida tomato industry, an industry that was once rife with wage theft, sexual harassment, and regular instances of outright slavery.

“This is a huge leap for Vermont dairy workers and for the dairy industry as a whole,” said CIW’s Greg Asbed, who was instrumental in establishing the Fair Food Program. [Update: On October 11, Asbed and CIW were awarded a MacArthur Foundation “Genius Grant” for their work on farmworker rights.]  “They will benefit—as the tomato industry has—by giving workers a voice, identifying bad practices and bad actors, and eliminating risks that make life difficult for everyone involved—from workers to farmers to buyers. The improvements will almost certainly drive Milk with Dignity’s expansion into the rest of the Northeastern dairy industry in the years ahead.”

According to Brendan O’Neill of Migrant Justice, the group will be focusing its efforts on implementing Milk with Dignity for the near future. “It’s essential that we implement the program effectively and make sure it’s strong before moving on.”

For the most part, this week’s signing ceremony was a festive event, with applause, smiles, cheers, upraised fists, and repeated choruses of “Sí, se puede!” But toward the end, Balcazar asked those in attendance to bow their heads in silence in memory of a colleague named José Obeth Santiz Cruz, who died tragically at the age of 20 in a Vermont dairy barn in 2009. He became caught in a mechanical manure scraper and was strangled. “His death was the spark that ignited Migrant Justice,” said Balcazar.

It also stands as a reminder that this week’s ceremony was one step in fixing the modern milk industry, which remains a dirty, dangerous business.