With a new guidebook, the cookbook author hopes to help bridge her existing audience of food and recipe lovers to a larger movement for food justice. 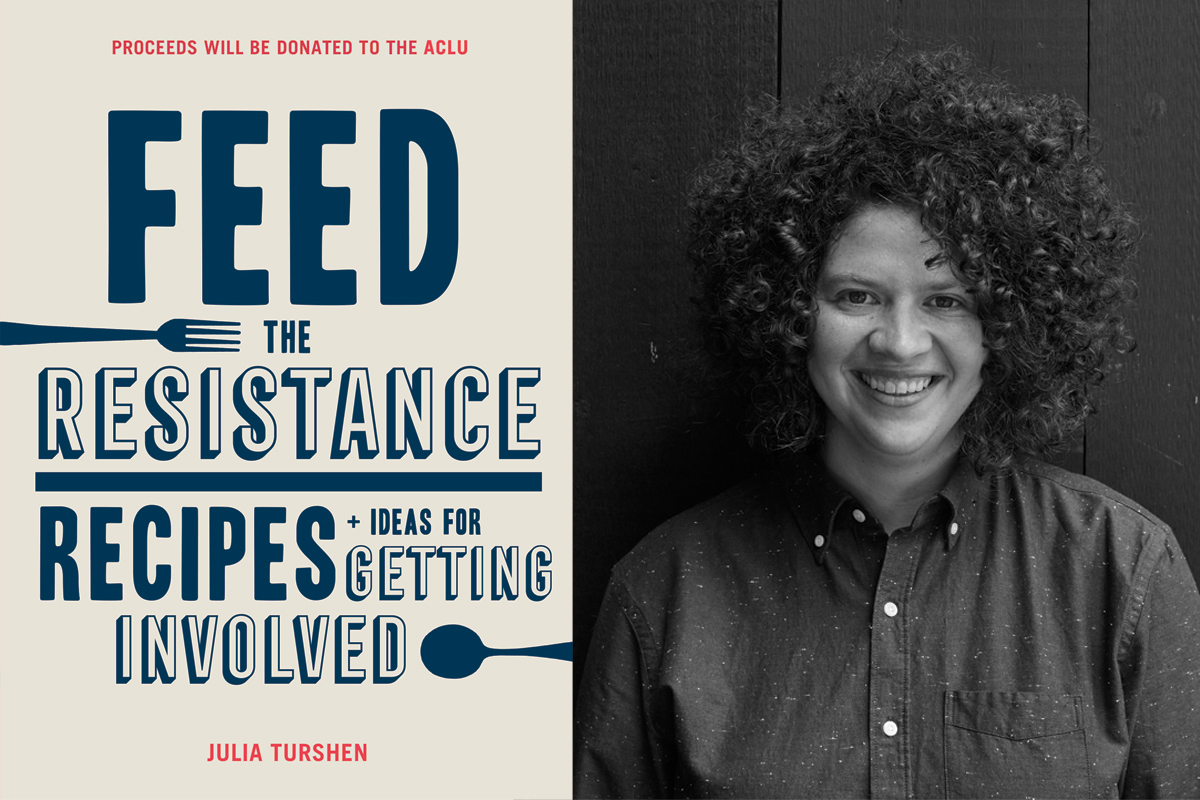 When Julia Turshen found herself frightened and dismayed after the last election, she responded by doing what she does best—she wrote a book: Feed the Resistance, which makes its debut today. The woman Eater called a “cookbook superstar and noted chef whisperer” has worked on many of the most successful cookbooks of the last several years, including Gwyneth Paltrow’s It’s All Good, Dana Corwin’s Mastering my Own Mistakes, and her own recent solo effort, Small Victories.

But rather than compile a traditional cookbook, Turshen worked with a host of other culinary personalities and experts to write a guide and recipe collection for resisting through food. She also hatched a plan to give all proceeds directly to the American Civil Liberties Union.

Proudly identifying as a gay, rural, Jewish American “fairly new to regular activism,” Turshen has more than a few good reasons to focus on resisting the Trump administration. She’s hopeful that, by the time the next major election rolls around, Americans will come to their senses. Until then, she writes, the resistance must keep moving, because activism is “no longer a few sprints here or there. It’s a marathon.”

Feed the Resistance embraces racial and culinary diversity with a series of recipes and essays for resistors at home and on the go. Interdisciplinary essays from a range of contributors including author Mikki Halpin; food activist Shakira Simley (whose contribution to the book was also just published on Longreads); organizer Callie Jayne; La Cocina’s Caleb Zigas; and writer and rabble-rouser Tunde Wey, explore the protocols, resources, and histories of food activism.

Multicultural recipes from a diverse array of chefs are cleverly grouped into three categories—Easy Meals For Folks Who Are Too Busy Resisting to Cook; Basic Goods + Portable Snacks; Feeding the Masses: Food For Crowds—explaining how to quickly create the nutritious food that the resistance likely needs to survive further willful deconstruction of the body politic.

“From the environment and immigrants’ rights to racial justice and more, food is one of the most accessible ways to understand what’s going on and how we can take active steps to create change,” said Turshen, who has this year transformed from a regular volunteer at food pantries to the local food team coordinator at her citizen action branch.

Civil Eats spoke with Turshen about Feed the Resistance, the next election cycle, and why we should all be asking hard questions about where our food comes from.

What role has food played in your experience as a political activist?

Food is the lens through which I see and approach everything in my life. From my daily rituals like cooking meals for my wife and myself, to my professional work as a cookbook author, food informs everything I do. It’s no different when it comes to political activism.

Food is the way I have understood issues that are unnerving—racial and gender injustice, economic disparities, environmental dangers, and on and on—and food is also where I find answers, and light at the end of so many tunnels. When I see the work that Jordyn Lexton does with Drive Change and Jessamyn Waldman Rodriguez does with Hot Bread Kitchen, I see how food can be the conduit to real and lasting changes.

How would you define the Resistance?

At this uncertain time, I see the Resistance as an intersectional group of individuals and organizations that are actively speaking up against injustice, dismantling systems that ennoble injustice, creating new spaces that promote justice, and supporting each other in all of the above.

What is your vision to feed not just the bodies of the resistance, but also its body politic?

In many ways, my vision for feeding the resistance is quite literal. The resistance is an active, living, ever-evolving thing, and like all living things it needs to be fed in order to sustain. We have to take care of ourselves and one another, and one of the most important forms of care is what, how, and when we eat. When it comes to politics and power, food also opens up so many avenues of dialogue and understanding.

If we truly understand that every single thing we eat has political ramifications, we can begin to untie some knots and pave new roads. Take a pizza: Who grew the tomatoes for the sauce? Are they being compensated fairly, and why can one person charge so much more for the same exact pizza in one setting versus another? Who’s able to get a bank loan to open a shop? Who are we eating the pizza with, and what are we talking about while we eat it? Who remains hungry while we eat?

The diversity and intersectionality of your cookbook’s contributors and their contributions are impressive.

I am so over-the-moon with everyone who contributed to the book, and grateful for their stories and insights. Feed the Resistance is so much bigger than me, and therefore so much better and stronger. It was non-negotiable for me that there be as many contributors as possible reflecting a range of communities, and that they were all compensated and credited. In terms of representation, when I look at cookbooks, magazines, blogs, and other food media, I regularly see people who look like me. I know this isn’t the case for everyone, and I wanted this feeling of visibility and recognition to exist for as many readers as possible.

What does your approach demand from farming as we know it, and perhaps how we may know it going forward?

Our fluency as consumers and individuals needs to evolve, so that we can better understand our decisions and our needs. What can be done to help individuals and consumers understand more about the policies and obstacles that keep the agricultural sector from producing affordable and healthy food.

What has inspired you since the 2016 election?

Honestly? Anger has inspired me, both my own and that expressed by the people around me. Of course, the hope that anger can crystallize inspires me too. But the most helpful thing that has inspired me since the election is making an active effort to diversify my community and my communication.

Having long, meaningful conversations with friends and colleagues who I don’t look like, and sometimes don’t agree with, is so important. Listening is one of the most important things I have been doing. It’s helped me to understand both my privileges and my obstacles.