Can Dumplings Heal a Neighborhood Divide?

An ambitious dinner series in Philadelphia spent a year trying to build bridges with food. 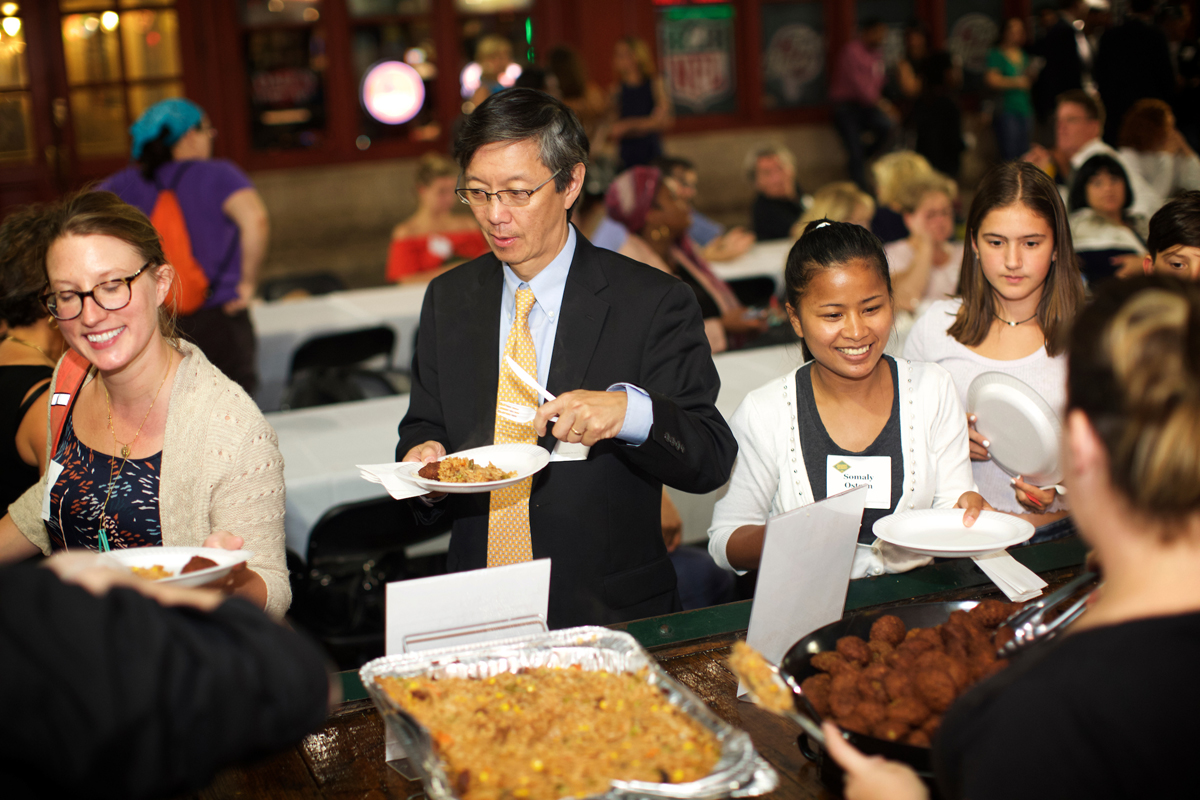 Philadelphia’s Reading Terminal Market (RTM) has been a food destination for a cross-section of people since it opened in 1892. As one of the city’s best spots for groceries, as well as prepared food such as roast pork sandwiches and whoopie pies, the 39,000-square-foot public food market in Center City brings together a kaleidoscopic array of ages, backgrounds, and ethnicities on a daily basis.

Its racial and socioeconomic diversity is especially remarkable in this era of travel bans, white nationalism, and the looming end of DACA. It’s also notable in Philadelphia, a sharply segregated city where 22 percent of people are food insecure, and which has a long history of racial and ethnic conflict. 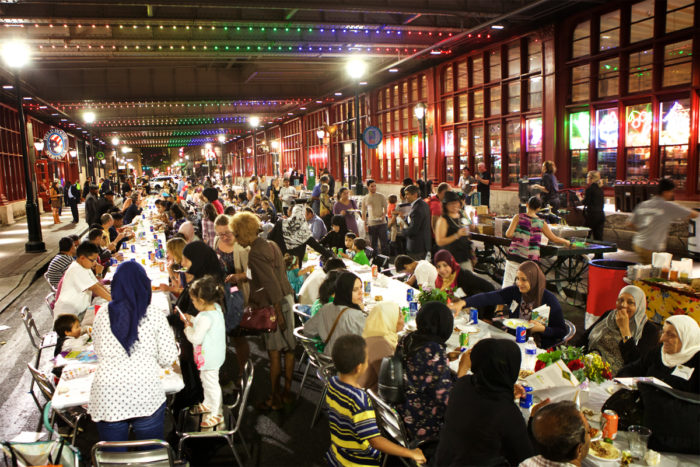 Late last month, RTM was host to another kind of gathering, a massive block party that brought more than 150 people out to celebrate the culmination of the “Breaking Bread, Breaking Barriers” program, which held six dinners over the last 12 months. The goal was to convene intimate gatherings to foster community and understanding among communities that don’t always cross paths: Jews and Muslims, Chinese-Americans and Mexican-Americans, and African-Americans and Korean-Americans.

Those meals were the result of a partnership between RTM, the city of Philadelphia, the University of Pennsylvania, and the Knight Foundation, and brought together about 40 attendees each, a group that comprised two or more different ethnic communities.

At last month’s block party, two tables, each stretching almost a full city block long, fluttered with white plastic tablecloths as guests grabbed folding chairs. All along the sidewalk, steam trays were stocked with meats, vegetables, and breads representing dozens of national cuisines from around the world.

Looking back on the Breaking Bread, Breaking Barriers dinner he cooked at earlier this year, Benjamin Miller, a chef-owner at El Compadre restaurant and an outspoken advocate for undocumented workers’ rights, recalled awkward but meaningful conversations. Around that table were communities of Mexican and Chinese heritage as well as representatives from the Italian-American community. 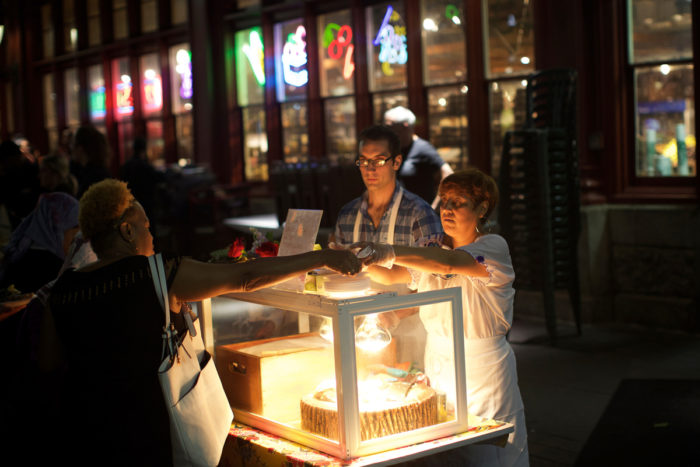 “There were tacos, stromboli, and dumplings—I like sharing culture like that,” said Miller. When asked to cook with his wife Cristina Martinez once again at the final block party, he didn’t hesitate to say yes.

The Reading Terminal Market has long stood out as an example of peaceful urban commingling—so much so that Yale professor Elijah Anderson included the market in his 2011 book about race and civility, The Cosmopolitan Canopy. Anderson believes that as a culture we can learn from “islands of civility,” as he calls them, places where segregation falls away and tolerance prevails. 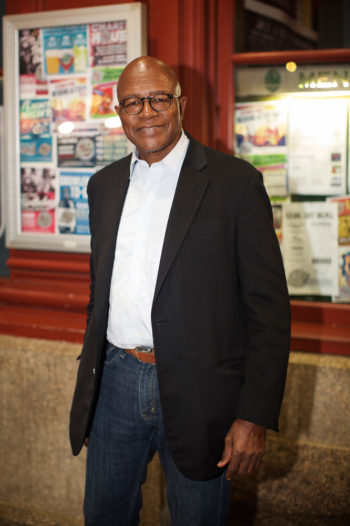 When RTM manager Anuj Gupta read about his own market in the book, he saw it—and the opportunities for civic engagement RTM might present—through Anderson’s sociological lens. In the spring of 2016, inspired by what he’d read, Gupta wrote a grant proposal for Breaking Bread, Breaking Barriers, in hopes of using this island of civility as a setting to bring very different groups of Philadelphians together around the dinner table to have hard conversations over shared meals.

Anderson was a guest of honor at the final event last week. “I was hoping something like this would start [as a result of my book], and I’m happy to see it has happened here,” said Anderson.

Gupta imagined dinners that would help people of very different cultures and backgrounds, longtime residents and recent immigrants, better understand each other. He thought food could build cohesion. In developing the project, Gupta partnered with the University of Pennsylvania’s Project for Civic Engagement, which would send a trainer facilitator to each meal to lead discussion. The proposed project was awarded a Knight Cities Challenge Grant.

“I couldn’t imagine how much the world would change between the time I wrote the grant proposal and when we held our first dinner,” said Gupta. One memorable meal took place mere days after Trump announced his first travel ban. The guest list included residents of Philly’s working-class Northeast section, both old-timers and newly arrived Syrian refugees. “It was very emotionally charged,” recalled Gupta.

Grant funding is all well and good, but to make an ambitious dinner series like this happen—to actually bring people to the table—you need allies inside the neighborhoods you want to reach. The dinner that brought Syrian refugees together with longtime residents of Northeast Philly might not have taken place without the help of Pam Baranackie, who has lived in Northeast Philadelphia since the 1980s. A member of her local neighborhood association, Baranackie called on her robust network of contacts to help make the dinner a success. 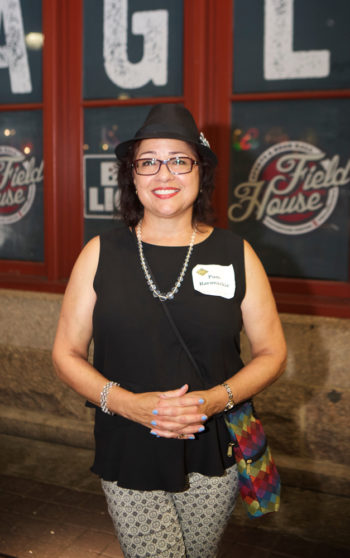 The Northeast skews more Republican than other parts of the city, with large sections of the neighborhood voting for Trump in 2016. And yet for more than 100 years it has been a place where new immigrants move. Several generations back, it was home to Irish immigrants. In the 90s, there was a wave of Eastern European and Russian people coming to the area. More recently, Syrian refugees have made this part of Philadelphia home.

Not everyone in the Northeast was enthusiastic about the arrival of the new residents, but the Breaking Bread attendees welcomed the Syrians warmly. “I reached out to people who I knew would be open to the dinner,” said Baranackie. That included people who joined the civic group wanting to bring neighbors together as well as other groups of immigrants who had been in the neighborhood for many years. When you’ve lived in a place for three decades, you know who most values harmony in the neighborhood and who isn’t interested in making new friends.

Lasting relationships were born over that meal. Last fall, Baranackie and a friend attended a celebration of Eid al-Adha at the home of one of her new Syrian neighbors. “She made the best stuffed grape leaves I ever had! I thought they were only a Greek thing,” said Baranackie. Now she plans to maintain those ties by leading flower arranging workshops, a hobby of hers, for the group.

Certainly there are bigger issues than the menu at hand, but predictably the food itself proved the strongest social glue. Most of the Syrians speak little English. At the final dinner, Amiana, a 41-year-old woman who arrived here eight months ago, was limited was limited to sharing her appreciation of the falafel and chicken cutlet.

Breaking Bread participants representing Southwest Philadelphia—Cambodian-Americans, many from families that came to the U.S. as refugees, and African-Americans—have no such language barriers. But through their own dinners earlier this year, they overcame other kinds of obstacles to understanding.

“I think for the first time certain people understood that [Cambodians] are not Chinese,” says Naroen Chhin, who is of Cambodian descent. “Cambodians are in the school-to-prison pipeline, too.” Chhin thinks that other people, particular other people who are also minorities, tend to lump all Asians together, an attitude that can minimize the struggles they have in common. 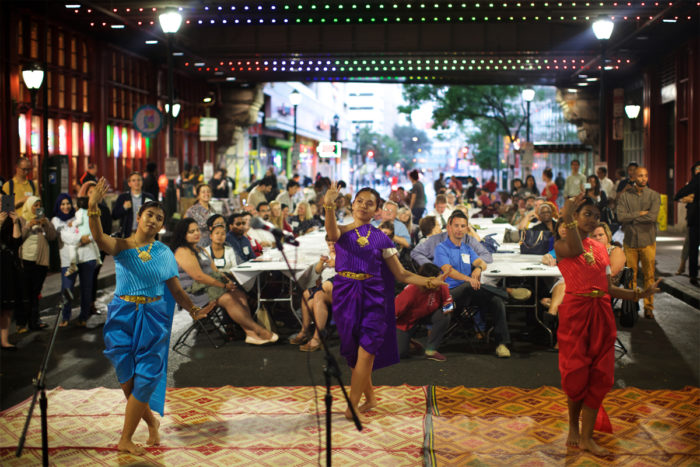 A Cambodian dance troupe, whose translates to Beautiful Girl Line Dance, performed at the event.

Mark Harrell, an African-American community organizer who attended both the Southwest Philly Breaking Bread dinner in June and the final dinner last week, said he hoped the new relationships made through the dinners would encourage the groups to work together to change the systemic issues that affect them both. “We talked about how different oppressed communities share experiences. There’s no need to look at each other as different,” he says.

As dusk fell over Filbert Street and guests snaked around the buffet line for second helpings, there was no doubt that the guests were enjoying the “island of civility.” Men in suits and ties, women in headscarves, kids in hoodies, and ladies in false eyelashes all feasted on chicken cutlets, tacos, dumplings, falafel, and cans of orange Crush. 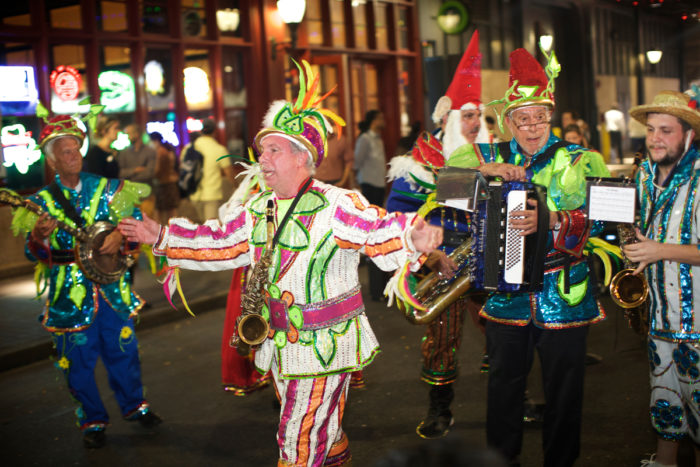 A marching band consisting of Mummers—a group that stirs up controversy with racist and sexist displays during their annual New Year’s Day parade—were invited to perform at the Breaking Bread closing event as well as an earlier Breaking Bread dinner.

With the Breaking Bread, Breaking Barriers series now over, RTM manager Gupta says he’d like to continue the work he’s started but can’t imagine next steps—yet. He hears that participants are organizing get-togethers on their own, usually centered on food, such as potluck suppers.

It may be naïve to think that a few moving stories, shared holiday celebrations, or swapped recipes will change the world. But for those who have made new and unlikely friends and allies at the Breaking Bread dinners, it may be a good start. “We want to keep this momentum going,” says Gupta.

Joy Manning is a James Beard award-nominated writer and the author of Stuff Every Cook Should Know and Almost Meatless. She is the editor of Edible Philly. She also co-hosts a podcast about food and cooking, Local Mouthful. Find her on instagram @joymanning. Read more >