A year after opening, the Oregon food hub and business incubator is building connections and helping small and medium food producers grow their businesses. 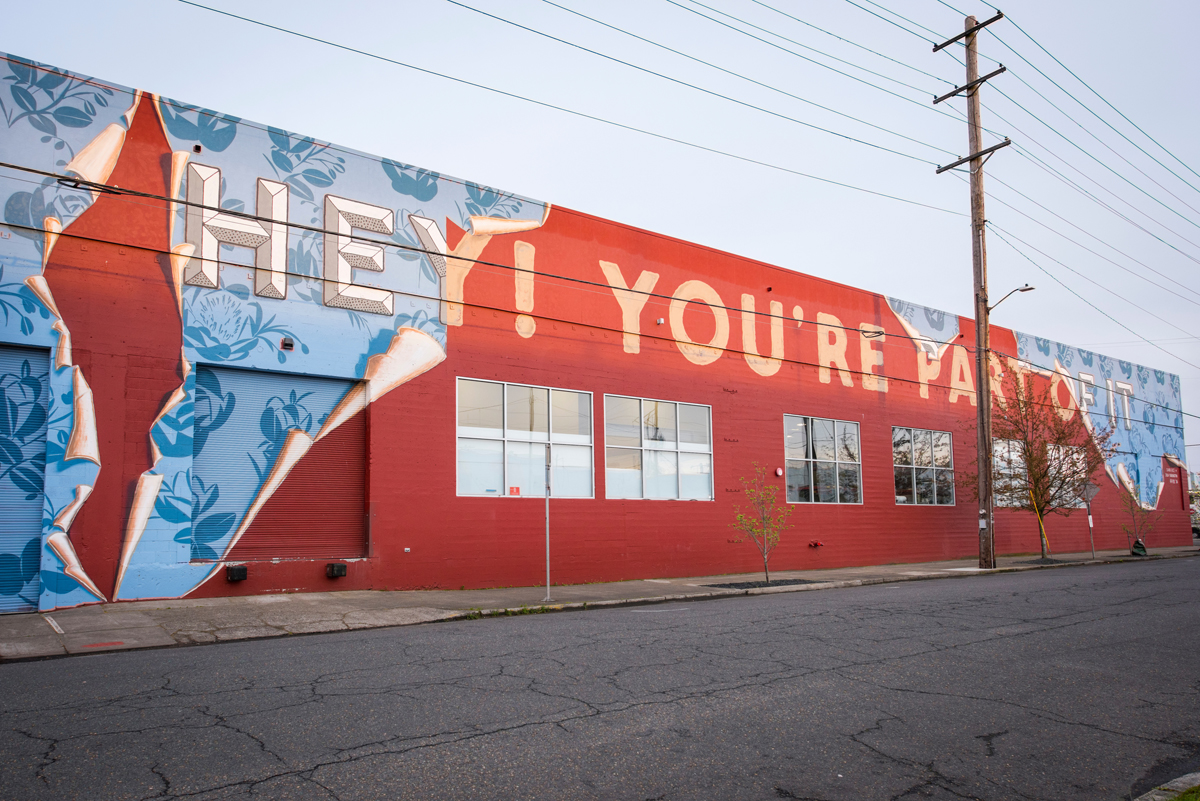 When Cattail Creek Lamb owner John Neumeister was younger, he would devote one day per week to making the 110-mile drive from his ranch near Junction City, Oregon to Portland, where the bulk of his customers were located.

“I’d leave the farm, drive 100 miles to the processor, pack the order myself, do the invoices by hand in the truck, and then go make 20-25 deliveries at restaurants around Portland,” said Neumeister, who will turn 70 next month. He would crash at a friend’s house in Portland, then do more deliveries the next day, on the way back home.

These 15-hour-days took their toll, but they also didn’t allow Neumeister, who has been raising pastured lamb since he took over his family’s flock in high school, any time to drum up new business or work on long-term sales strategy. And if he got a last-minute order from a Portland restaurant who suddenly ran out of lamb mid-week there was little he could do about it. 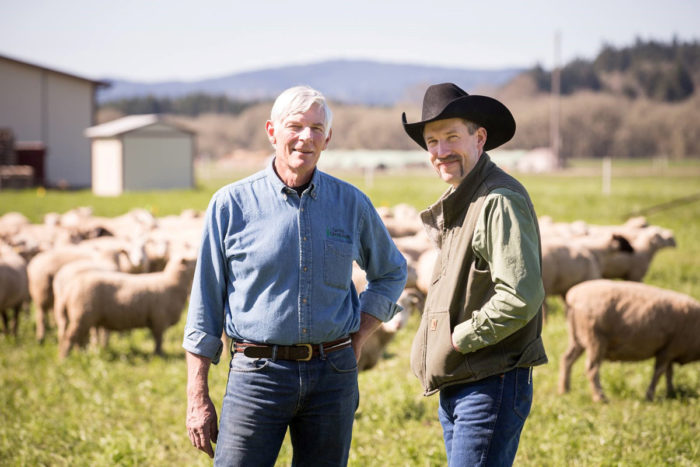 “If a chef called me on Thursday, I might say ‘You know, I can see if UPS can deliver it,’” Neumeister said. Which meant trying—sometimes in vain—to stalk his local UPS driver, whose delivery route he knew by heart. If he couldn’t locate the UPS truck, Neumeister was out of luck.

“And then the restaurant would end up buying from one of my competitors.”

Now, thanks to the Redd on Salmon, a Portland food hub created by the environmental nonprofit Ecotrust, Neumeister not only has freezer storage space for up to 3,600 pounds of lamb in Central Eastside Portland, he’s got a stall for staging orders, an office space, and built-in distribution via B-Line trikes to Portland area restaurants.

Best of all, there’s no need to chase down UPS drivers. When a restaurant needs a special order of pastured lamb, as happened earlier this month with chef Joshua McFadden’s Tusk, all Neumeister needs to do is call B-line, who also does fulfillment for Cattail Creek.

“And I’m still sitting at my desk in my pajamas,” Neumeister explained by phone from his ranch. “I’m a very small company with no employees and I’m able to do a 7-days-a-week service.”

Since it opened last fall, the Redd has been a game-changer for Oregon’s small and mid-size farmers, ranchers, fishers, and food producers. That’s by design: Ecotrust conceived of the Redd as a way to help create a thriving local-food economy that supports what food systems experts call “the agriculture of the middle.” 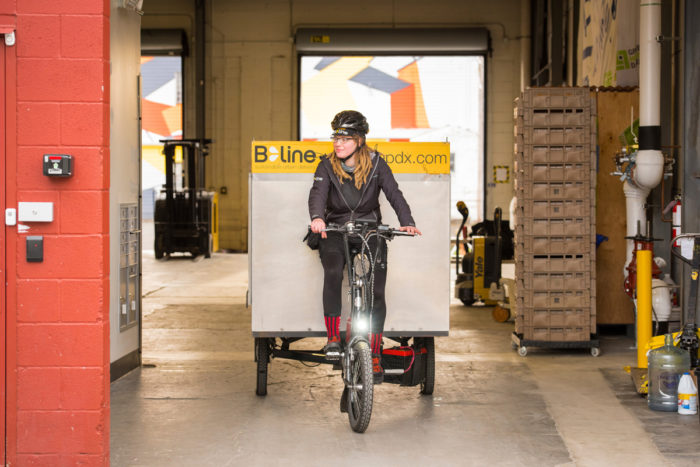 Ag of the middle producers “carry local values,” said Amanda Oborne, Ecotrust’s vice president of food and farms, including the use of regenerative production practices, community engagement, and a commitment to serving local markets. And with support from the Redd, those producers will be able to operate at a scale that allows them to serve bigger outlets like schools, hospitals, grocery stores, and corporate cafeterias.

“In other words,” Oborne said, “They’ve got both the mindset and the capacity to help shift the whole food system.”

The Challenges in the Middle

Ag of the middle food producers, like Neumeister, need help. Too small to get distribution from mainline distributors like Sysco or Food Services of America, they badly need distribution and other infrastructure like cold storage (freezer and refrigeration); “dry storage” space to stash boxes, bubble wrap, and products; an affordable kitchen space where they can make their product; and offices where they can do paperwork.

The Redd is designed to meet all those needs, and it has already signed up five primary tenants—B-Line, FoodCorps, New Foods Market, SoupCycle, Wilder Land & Sea—and 75 subtenants. All 2,000 feet of cold storage—half freezer space and half refrigeration—is at capacity; dry storage space is at 80 percent capacity and office space is at 50 percent capacity.

For Neumeister, storing his lamb in the Redd’s freezer was a no-brainer, since 80 percent of his business is still in Portland. Though the price tag may seem steep to ranchers used to paying for industrial cold storage in Clackamas or further afield, Neumeister says he encourages these ranchers to look at the myriad other benefits of being stationed at the Redd.

“It’s hard to put a dollar value on the synergy between you and all the other members here,” Neumeister said. Since he’s been in the facility, Neumeister has generated new business without even trying. Wilder Land & Sea—a primary tenant at the Redd—is a distributor of regionally sourced seafood, grass-fed beef, pork, and pastured chicken who has existing relationships with Portland restaurants like St. Jack. 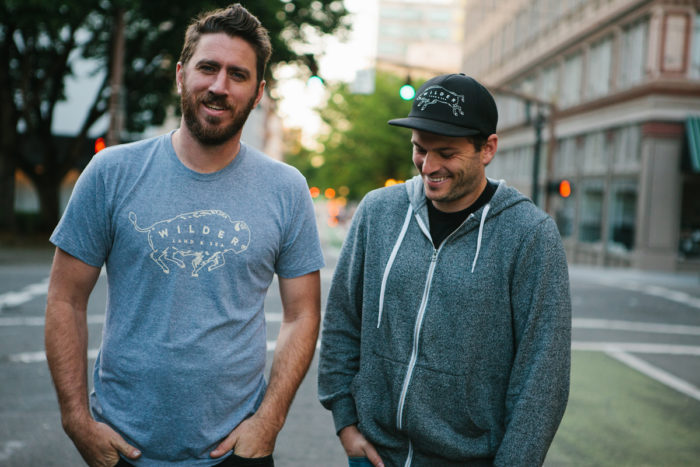 Since chef de cuisine Jacob Harth was already ordering seafood from Wilder Land & Sea, it was easy for him to add on a standing order from Cattail Creek Lamb. “So [now] I sell to Wilder and Wilder sells to them,” Neumeister said. (Wilder also delivers Cattail Creek Lamb to restaurants that fall outside B-line’s 3-mile radius.)

Eike Ten Kley of community supported fishery Iliamna stages the family’s salmon share pick ups at the Redd, and Wilder has been instrumental in helping the Kleys get their wild salmon into brew pubs like Bridgeport, Ten Barrels, and Woodmere.

Carman Ranch, a cattle ranch in eastern Oregon owned by Cory Carman and David Flynn, also rents freezer space at the Redd. Because Neumeister and Carman’s products—grass-fed beef and pastured lamb—sit side-by-side on the freezer shelf, it makes sense to deliver both together. Both Neumeister and Carman have long-standing relationships with Portland restaurants, including Higgins (Carman) and Nostrana (Neumeister).

“If I can convince my customers to buy Carman Ranch beef, they do,” said Neumeister. So far, at Neumeister’s recommendation, both Coquine and Tusk have begun ordering Carman Ranch beef. Because Strother Hill, who does wholesale sales for Carman Ranch, works from the Redd, he met the guys behind Marukin Ramen (who make their broth in the SoupCycle kitchen) and hopes they’ll soon order pork neck bones (Carman Ranch also sells limited amounts of sustainably raised pork).

This kind of synergy is what puts the Redd beyond the USDA’s definition of a traditional food hub: it’s an incubator for micro-businesses. There are over 350 food hubs around the country—in places as diverse as Durham, North Carolina, Philadelphia, and San Francisco. A traditional food hub is a central facility that does aggregation, marketing, and often distribution of agricultural products. But the Redd takes it a step further by offering all these other elements like storage for other locally made food products, food production areas, and office space. Jim Barham, an agricultural economist at the USDA, calls the Redd a food hub on steroids or—better yet—a “food innovation cluster.” (Another example of a food hub on steroids would be the hotly anticipated Hunt’s Point food hub, in the Bronx, slated to open in fall 2019.)

“The term ‘innovation clusters’ is typically associated with the tech industry,” Barham said. “But in the case of the Redd, it’s not just business-to-business but business-to-other service providers. So Ecotrust, as a nonprofit, can offer a lot of other services: connections to others who have experience with food safety, branding, developing new markets for your product.” Barham was so impressed with the Redd’s model that he recently flew 13 “value chain coordinators” from around the country (part of a USDA Rural Development initiative called Food LINC) to Portland so they could tour the Redd and see the innovations at work in the community.

At the Redd, sharing space—whether in a kitchen or the “dry storage area”—encourages a lot of cross-pollination. This synergy is part of why the 20-something owners of Ground Up PDX chose it as their production headquarters. A nut butter company that employs and mentors disadvantaged women, Ground Up PDX leases kitchen space from New Foods Market. This means that co-owners Carolyn Cesario and Julia Sullivan (and the women they employ) often rub elbows with Kristen Honey at Eat Fancy Plants, a vegan catering company that also leases kitchen space there. 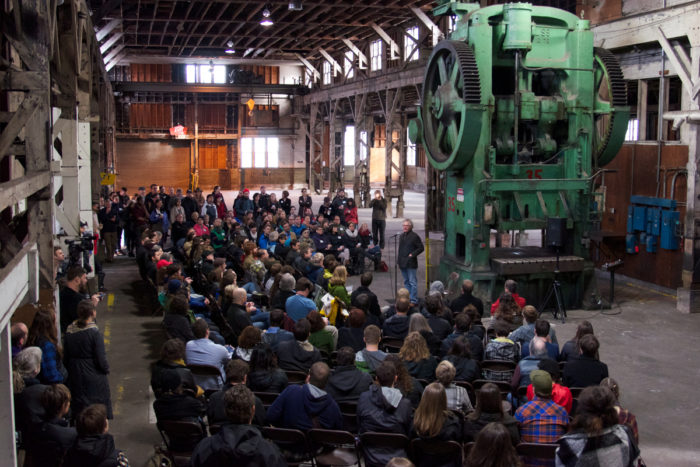 “She’s always offering us tastes of her food!” Cesario said. “And she wants to use our nut butters. She’s developing a recipe right now.”

They also love running into Betsy Langton from Betsy’s Best Bar None, whose dry storage space is next to theirs. Betsy has given them advice on everything from distribution strategy to how to scale up production.

“That kind of advice is very valuable to us. If we were working in a silo, it would’ve taken us longer to figure these things out,” said Cesario.

Neumeister also makes the most of this proximity to other businesses. “If I have an issue that’s challenging me, I might say, ‘Have you encountered this—and how are you handling it?’” he said. “And so for me, that easy access has been valuable. We’re developing collegial relationships that are very real.”

In addition, this November, Ecotrust will pilot a new “Ag of the Middle Accelerator” to provide five food producers from economically distressed Oregon counties with business development support. The two-year project, which is funded by a rural business development grant, will help ranchers, farmers, and other food producers learn about business structure, tax accounting, sales and marketing, and food safety. Ecotrust will also help these producers apply for USDA’s value added producer grants.

Some of these producers—whose names will become public in November—already use the Redd; some have never set foot in it. “We’re basically developing an ecosystem of mid-scale producers that are really poised for growth,” Amanda Oborne said. Some tenants will be at the Redd forever—others may use it as a stepping stone on their ascent to world—or at least regional—domination.

In the grand scheme of things, Oborne sees the Redd as more than an incubator for small- and mid-sized food companies. “I don’t think of the Redd as confined inside those walls. What we’re really talking about is a thriving food economy.”

Civil Eats is a media partner for the Light up the Redd benefit, taking place October 5 in Portland; use the code “civileats” when you buy tickets to save $25 off the ticket price.

This article has been updated to include comments from the USDA. 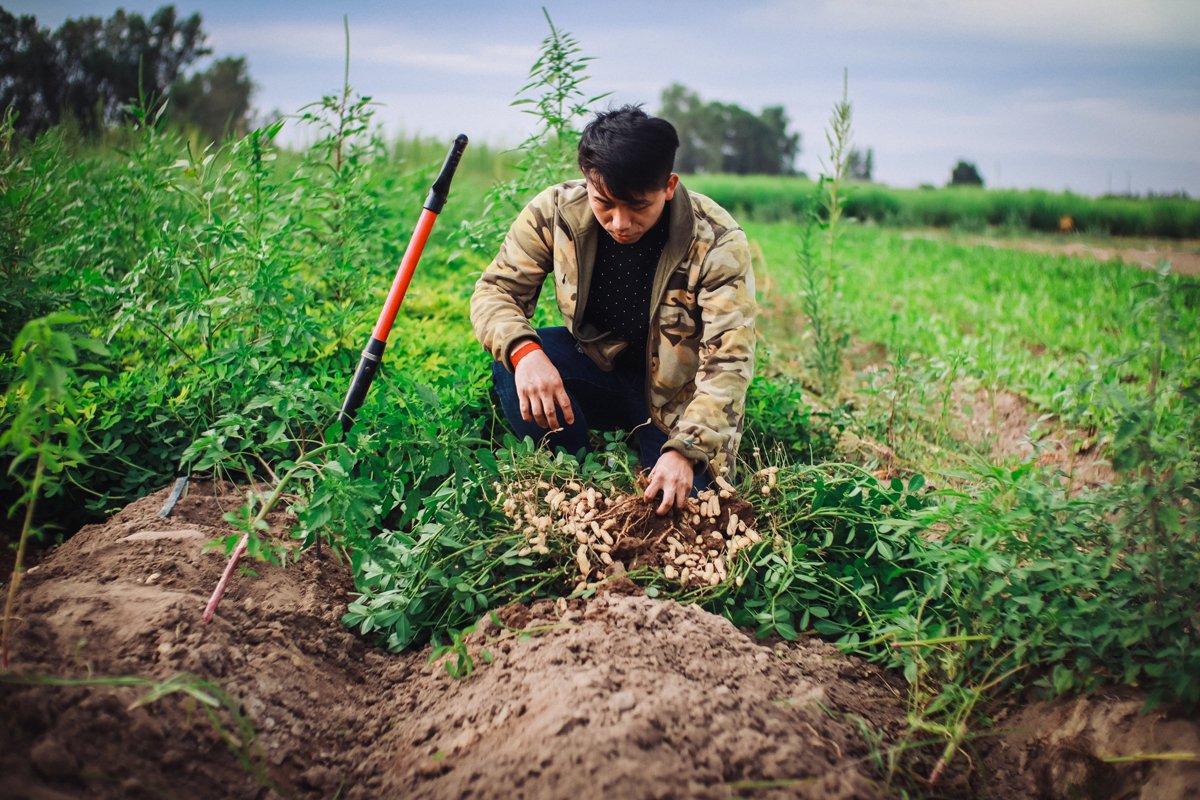