Reflections on hunger, bulimia, and food waste in Black America. 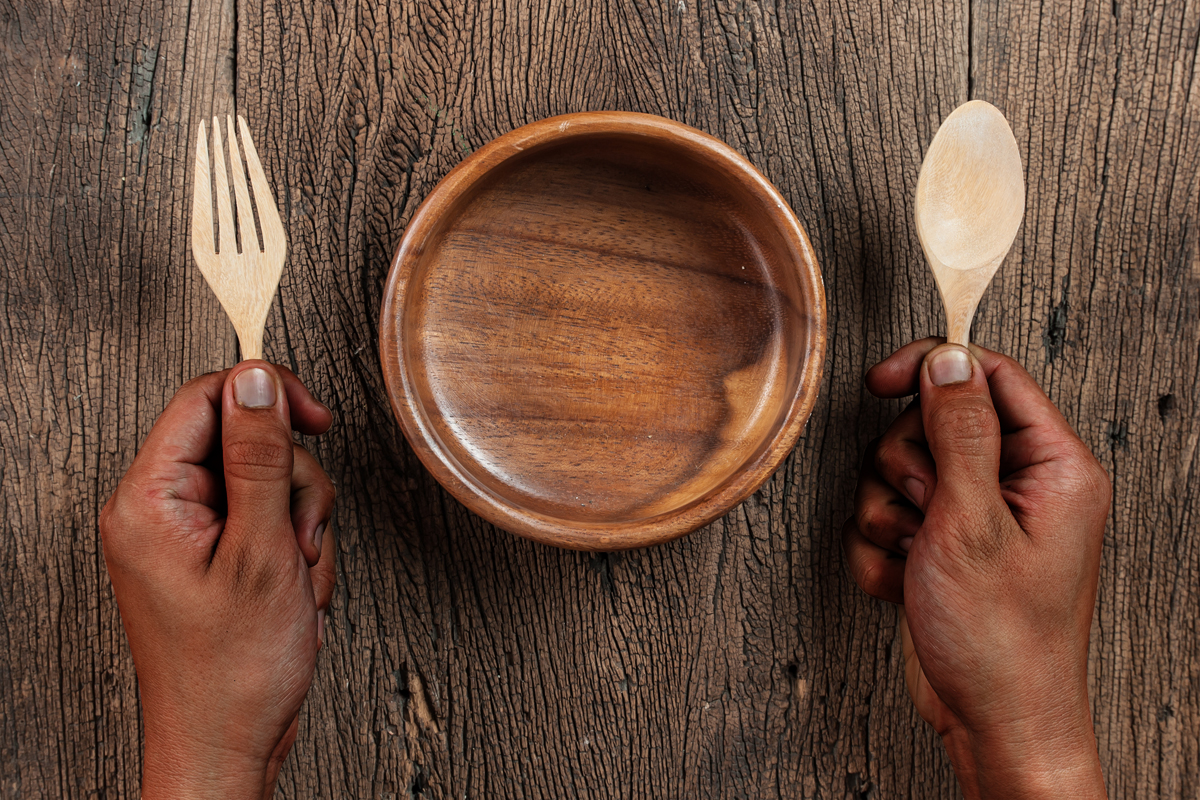 I am compulsive about eating everything I buy, because when I waste food, guilt gnaws at me more sharply than any hunger I’ve ever felt. I’ve always had enough to eat. I didn’t spend my childhood being forced to clean my plate or endure lectures about children starving elsewhere. I fondly remember my father finishing what I didn’t, especially in restaurants.

He was worldly, friendly, grown-up. I was closed-off and picky, with a small appetite on top of food allergies. Now another difference occurs to me—an alternate explanation for his behavior.

I call him to confirm my hunch and he answers my first question before I can ask it. My father grew up poor and Black in the rural south, where he tells me, “You didn’t waste anything.” He raised me in the suburbs where food insecurity was something I only understood in the abstract.

My father assures me his family always had enough to eat—between groceries, crops, livestock, fishing, canning, and freezing. Attempts at being wasteful or picky were met with: “I guess you’re gonna suck your thumb or starve.”

Being one generation removed from his early circumstances isn’t why I eat everything I buy these days. I don’t waste food because I’m ashamed of the years I spent doing it—throwing food and my own money in the trash and flushing them down the toilet while anorexia and bulimia consumed me.

Eating disorders are mental illnesses. Mine led me to believe eating something just to regurgitate was less wasteful than throwing it away. Tossing food seemed cruel. But I did it anyway to stop myself from eating, only to dig it out and inhale it in a daze. Dousing it in water or soap could deter me but I hated to render food as worthless and undesirable as I felt in those moments. I applied the same eating disorder non-logic to chewing food to a pulp and spitting it out—didn’t the gesture count for something? When I couldn’t refuse food, I hid it to dispose of later. I thought that was self-preservation. I thought I needed my eating disorder—not food—to live.

I hesitate to mention my hunger in the same breath as the other kind of hunger. Nearly 13 percent of U.S. households were food-insecure at some time during 2015. The fact that I wasted food that others might have eaten doesn’t escape me. Industry giants and government subsidies have created a system that makes processed foods filled with empty calories extremely affordable, convenient, and popular—across class lines.

Our food waste problem in the U.S. is equally dire. We waste more food than any other nation in the world—up to half of what is grown and about one third of what makes it to consumers goes to waste. 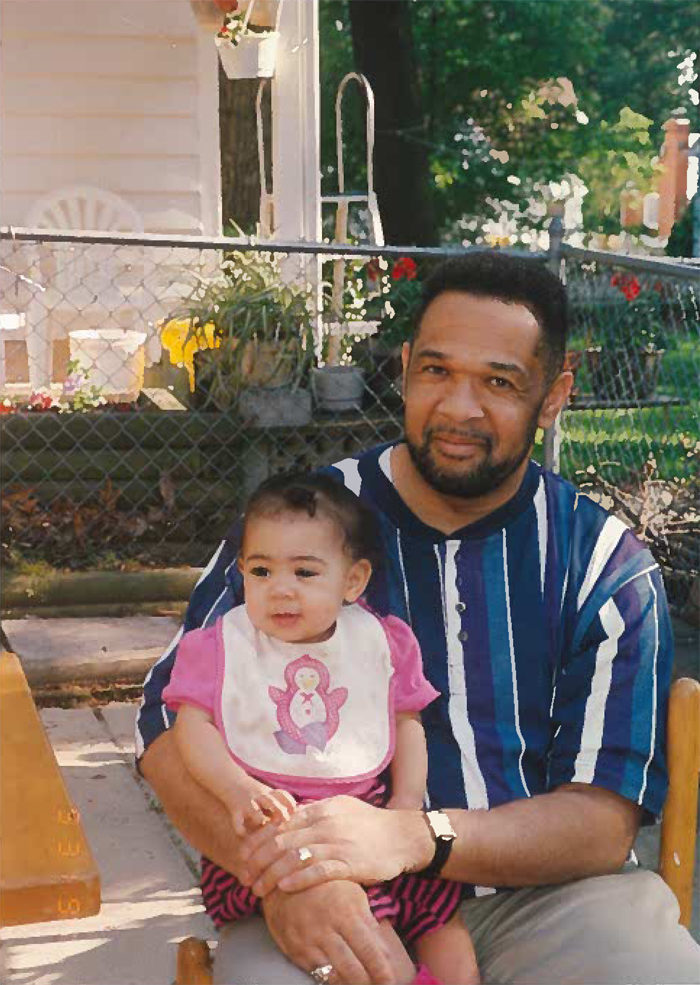 Mariah Stovall and her father, circa 1994

A low- or zero-waste society is ideal, but it can be tricky for some of us to strike the right balance. Forcing people to eat food they don’t want can put undue strain on physical and mental health even if they do not struggle with eating disorders. The balance is even more precarious for those who have a fraught relationship with eating. There’s no simple solution, but we could start with increased awareness about food waste, a culture of intuitive eating, and not concerning ourselves with what or how much others are eating.

I was the opposite of food insecure when I was anorexic. I planned every safe, “clean” calorie days in advance. When I was bulimic I bought every binge food I wanted. While eating disorders seem like a series of very deliberate choices, suffering from them is anything but. They take over and take people’s lives but remain poorly understood and under-researched by the medical establishment. My guilt often leads me to believe that I chose to suffer. From there I slip into believing another big misconception: that only selfish, wealthy, white girls have eating disorders.

I ask my father if the pressure not to be wasteful still weighs on him. He answers quickly, “I probably have never wasted food.” He doesn’t mean to be pointed but I take it personally. He has no idea what I did when I was sick, how much I’ve disappointed him.

The Science of Starvation

The psychological scars from impeded access to food are fairly consistent, regardless of the circumstances of the deprivation. In 1944, widespread wartime famine inspired researchers at The University of Minnesota to conduct a clinical trial known as The Minnesota Starvation Experiment to study prolonged caloric restriction. The tactic they used to recruit volunteers? Guilt. An advertisement featuring a picture of children fumbling with empty bowls asked volunteers to “starve that they be better fed.”

Thirty-six white men endured 12 weeks on a regular diet, followed by 24 weeks in which their intake was cut by about half and restricted to bland vegetables, bread, and macaroni. They were required to walk or run 22 miles a week. Even after returning to an unrestricted diet, their minds and bodies were damaged. Small bouts of euphoria were eclipsed by depression, anxiety, irritability, hysteria, self-harm, social withdrawal, aggressiveness, and decreases in concentration, energy, and libido.

Their relationships with food were upended. Many of the men who completed the experiment binged afterwards. Plagued with guilt at how insatiable their newfound food obsessions were, some coped by volunteering with post-war relief efforts. Three became professional chefs. Some lived in fear of food being taken from them again. This hell is familiar to many who have experienced food insecurity and/or an eating disorder. Things are particularly bleak for the overlooked subset of people who’ve dealt with both.

Race and Eating Disorders: The Intersection

Stephanie Covington Armstrong’s Not All Black Girls Know How to Eat: A Story of Bulimia sheds light on how food insecurity can be a risk factor for eating disorders and other mental health issues, particularly for people of color. Her story is rare in the world of eating-disorder memoirs. When I see myself in her, another Black woman with an eating disorder, the validation of companionship is a salve—but it also aches. When I cannot relate to her circumstances, I listen and learn.

A Black girl raised below the poverty line in Brooklyn, she explains in the book that food was always a luxury for her and recounts generations of food insecurity, from her maternal grandmother to her mother and her sisters. For Armstrong’s mother, food was about survival, not pleasure, while the author longed for delicious meals made with love. These equally valid reactions to food insecurity presented a problem when a young Armstrong refused her mother’s cooking, shocking and disgusting her family. “I felt conflicted when my mother could actually afford to feed me and I refused to eat; there were equal measures of guilt and shame mixed with smug self-satisfaction,” she writes.

As a teenager, Armstrong lived with her mother and her mother’s boyfriend, a wealthy white man with utilitarian views on food. The couple offered her little more than the liver and onions they ate almost exclusively, so she earned money to buy and hoard more palatable food. Around the time she began developing bulimia, she attended a cheerleading camp. “There was so much food I almost fainted from happiness…I gorged myself at every meal, expecting this treasure trove of sustenance to disappear at any moment.” Entering a space where food was suddenly accessible overwhelmed her, much like attempts at anorexia recovery cause many people, including myself, to develop bulimia or binge-eating disorder.

The threat of food insecurity haunted Armstrong into adulthood, despite greater financial stability. She binged and purged repeatedly in quick succession: “An hour would pass before I got that panic, starving urge again.” Unlike her mother, who viewed food as a means of survival, Armstrong “needed [her] bulimia in order to survive.” The delusions and denial eating disorders inspire—like believing illness is paramount to your well-being—are partially why they’re so difficult to treat. It took years for Covington connect the dots: “Situations reminiscent of my childhood poverty were a huge trigger.”

Armstrong also admits she internalized her pain by putting forward the image she wanted to portray. “I was the Strong Black Woman archetype who did not need anything or anybody to survive. I would live on crumbs and air like my ancestors if I had to, and I would survive this, too.” Reading this made me question my life-long assumption that being stoic, independent, and prone to perfectionism are just parts of my personality. But a lifetime of often being the only Black woman in academic, athletic, social, and professional situations likely heightened my desire to be exceptional. As an undergraduate, I rejected the treatment my college encouraged me to take advantage of. I insisted I didn’t need it.

When Armstrong volunteered for a clinical trial for bulimia medication, the professionals paid to help her were dumbfounded by her presence and excused their behavior by citing the fact that she was their only African-American participant. There’s truth in her reply, “‘I binge and purge just like every other bulimic,’” but it doesn’t change the fact that there were systematic obstacles between her and a fair shot at lifelong health and food security. Decades after the events in Not All Black Girls Know How to Eat, Black women still lack the guilt-free access to appropriate and effective mental health services we need and deserve.

Armstrong eventually made a breakthrough in a support group when she took the risk of sharing her story. A white woman spoke next (violating the rule prohibiting participants from commenting on others’ experiences) and offered an unwitting reminder of how much bumpier Armstrong’s road to recovery would be. She said, “I wish I were a poor Black woman, because then maybe this need to throw up my life would make sense.” As if anyone’s eating disorder is that simple.

Identifying as a minority would not have made it easier for her white peers. And wealth, racial equality, and gender equality alone would not have cured Armstrong. In addition to being inherently complex, eating disorders evolve over time. Even when the causes appear fully clear, there’s no guarantee of a solution.

I’ve found cognitive behavioral therapy (CBT), in which patients confront and alter the ways in which their thoughts affect their behavior, to be the most effective treatment for bulimia. And I’m not alone. This approach is somewhat similar to the critical thinking that cultural competence training requires of healthcare professionals, and it’s most likely to work if it’s done in a culturally appropriate way.

The U.S. Department of Health and Human Services outlines standards for culturally and linguistically appropriate services, but there’s no national mandate that therapists or medical professionals receive this kind of training, despite its benefits. Imagine the effectiveness of culturally competent CBT for the people of all backgrounds whose lives are being stolen by eating disorders.

And while more and more people make efforts to reduce food waste and tackle food insecurity, others have valid reasons for having different priorities. Not everyone has the luxury of spending so much time worrying about these things. I do, but what’s best for the world and what’s best for my well-being aren’t always the same thing. Still, I’m trying to do both—and that’s enough to make my dad proud.