A new program is serving to bridge Korean history to the contemporary food and farm justice movements. 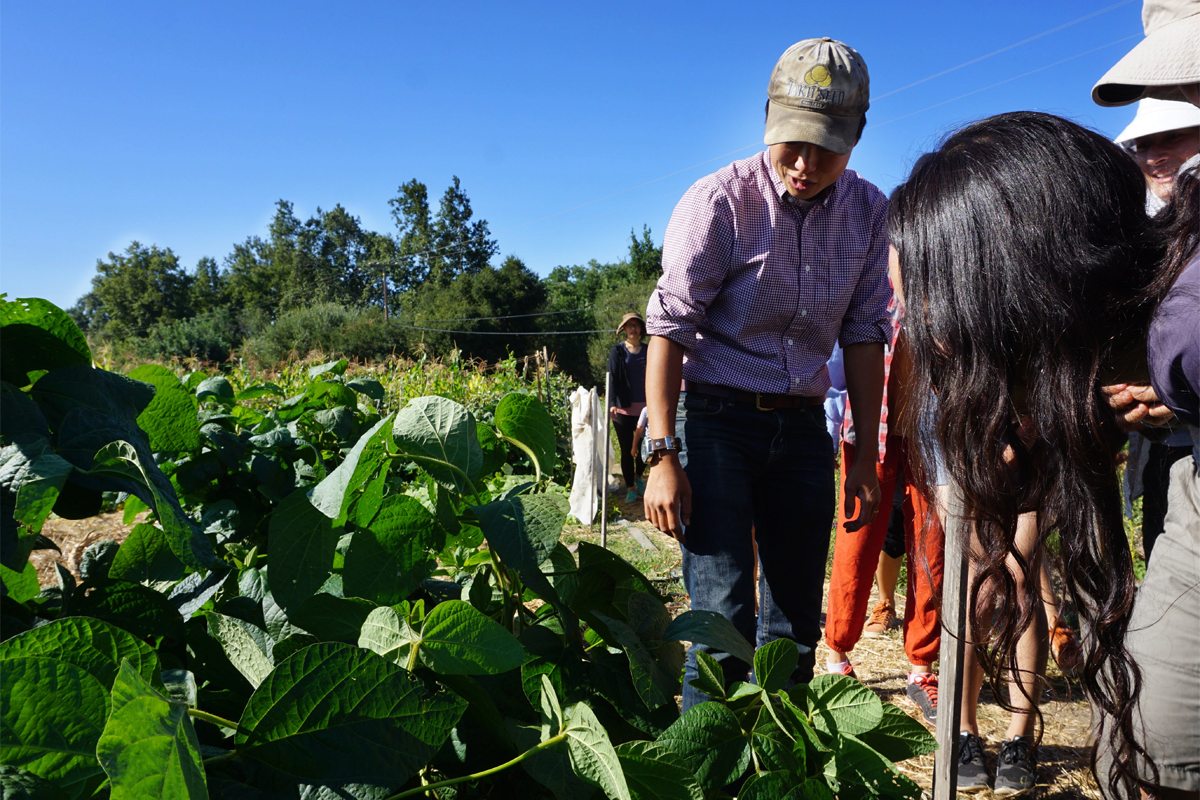 It’s been a hot summer out in Sunol, California, about an hour east of San Francisco, but every couple of weeks, a group of Korean-American volunteers has been gathering at Namu Farm to weed melons, pick perilla, and learn about sustainable farming. Most are in their 20s and 30s, but they represent a broad cross-section of the Korean diaspora, including Koreans of mixed heritage and Korean adoptees. They’re part of a new project called nonghwal, run by farmer Kristyn Leach and community organizer Yong Chan Miller.

Namu Farm, which grows produce in the Sunol AgPark, for the San Francisco-based restaurant Namu-Gaji, makes sense as the site for nonghwal. Short for nongchon bongsa hwaldong, or rural volunteer activities, nonghwal has always been intertwined with social movements in Korea. Now, with about a dozen participants each month, the program is serving to bridge Korean history to the contemporary food and farm justice movements in California.

Leach has dedicated her life to preserving Korean heritage varietals and East Asian natural farming methods. “The goal, when I started the farm, was just figuring out a way to systematize a climate-resilient form of farming that would be rooted in subsistence farming practices,” Leach says. “One, that knowledge is rapidly being lost because of industrialization. Two, in the precarious times we live in, [the question of] who gets impacted the most by climate change outcomes will be disproportionately based on race and class.”

And, although Leach says she was “personally disinclined to have volunteers” participate, she says she “pretty quickly had a lot of trust and esteem” in Miller as the organizer because they have a similar approach to building relationships and “just really showing up for one another.”

Roots in the Democracy Movement

The program’s origins stretch back into the Japanese colonial period, when students went into the countryside to help raise literacy rates in the rural population. Nonghwal reached its heyday during the democracy movements of the ‘60s, ‘70s, and ‘80s, when organizers and students, mostly from elite universities in Seoul, mobilized against authoritarian regimes that violently suppressed resistance. Students stayed in farming villages on their vacations, weeding rice paddies and mucking outhouses by day and holding political discussions by night.

Paul Y. Chang, Associate Professor of Sociology at Harvard and author of Protest Dialectics: State Repression and South Korea’s Democracy Movement, 1970-1979, explains that nonghwal was part of a “three-hwal movement” that also involved students going into factories (gonghwal) and mines (gwanghwal). These formative experiences helped change the nature of the movement overall.

“One of the main challenges for the democracy movement was to try to create a united front,” he says. “For the students to go down there and create these coalitions with farmers through strategies like the nonghwal program… [and by] making connections with multiple sectors of society, the democracy movement became a universal movement as opposed to one that was driven by radical leftists as the government claimed.”

It wasn’t always perfect. Chang notes that students had “a romantic notion of rural Korea, but also a kind of patronizing attitude where they thought it was their duty to mobilize these naive, uneducated farmers who were otherwise being co-opted and appropriated by the government.” Sometimes the students and farmers clashed over differences in expectations. Over time, however, many of the nonghwal participants found themselves questioning this farmer-as-object attitude and changed their approach. Some even became farmers themselves.

After South Korea ushered in democracy in 1988, social movement organizations splintered and farmer protests continued over trade liberalization and land disputes. Today, farmers are a vocal part of ongoing political struggles. Just last year, farmers from all corners of the country joined the massive protests against then President Park Geun-hye in Seoul that captivated the world, many of them driving their tractors and trucks toward the capital until they were stopped by police. 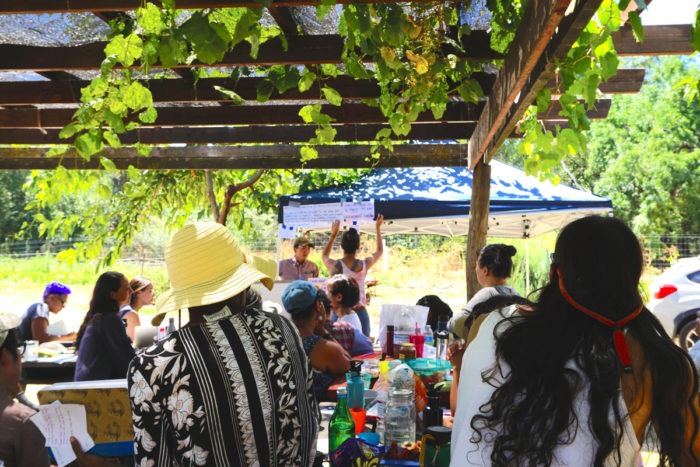 Nonghwal is rooted in this same spirit of resistance and continues today. Many nonghwal programs now center around environmental issues and position farmers as the teachers. At a short nonghwal in Korea that I joined last year, we called the farmers “nongbu-nim” and “seonsaeng-nim,” using honorifics traditionally reserved for scholars and doctors.

Miller and Leach’s nonghwal program in California has coalesced around one question in particular: How can we support farmers of color growing heritage varietals?

Farmers of color around the U.S. have historically faced structural barriers such as access to land and capital. But there’s an additional level of irony for those struggling to reclaim their traditional farming methods. As Leach points out, many of the same colonial forces that exported industrial farming and replaced traditional methods in places like postwar Korea now profit from marketing organic and “natural” foods back to the same people whose ancestors once grew them. “People get dispossessed of that knowledge and then it gets repackaged and sold back,” she says.

A central piece of resistance to white supremacy is seed sovereignty—the right to save and claim ownership over one’s own seeds—an issue Leach says is still a blind spot even within the organic movement, itself a largely white-dominated space. At a time when the issue of seed ownership is more fraught than ever (just four corporations will soon own over half of the world’s seeds), indigenous farmers and other people of color in the food system often get lost in the churn.

“Ultimately it still distills down to a sense of entitlement to those genetics, and the ability to not engage with the people who have made sure that that variety continues to exist into modernity,” she says. “And people risk a lot to [save seeds]. For immigrants, seeds are what you sew into your clothes. [They] find ingenious ways of smuggling and that speaks to the necessity of it for people’s lives, not the novelty or thinking it’s a cool thing to bring to a farmers’ market.”

The Northern California nonghwal group has rallied around the cause. On a recent sunny Saturday in August, members of the group met with a dozen or so farmers of color and seed activists to brainstorm solutions and tactics for a local POC-led seed movement. “Nonghwal … is asking people to think a little bit more intentionally about ecology and our place within it,” says Leach. “It’s asking for us to infuse our movements with a lot of humility, and it’s also offering back an opportunity within the radical community to think about what it would be like to really divest from the system we live in.”

Beyond the politics, nonghwal has also had a deeply personal impact on the participants. Member Natasha Harden remembers her first time on the farm: “With anything to do with identity, as a mixed person, I’m always nervous to go because I don’t want to stick out.” But it was on that first day, when Leach asked everyone to sit quietly between the rows of perilla, Harden says listening to her ancestors and the plants, and seeing another participant’s young daughter run through the field yelling “Umma!” (Korean for mother), something shifted.

“I think that people have developed a relationship with the land and the plants that is not so explicitly transactional,” Miller muses. While some visitors to the farm do occasionally take home extra fruits or vegetables, she notes that “the gifts that the people are getting from the farm isn’t about produce, there’s actually a different kind of relationship being developed.”

Case in point: Harden has enrolled in a horticulture program at Merritt College in nearby Oakland. It’s a big shift for this New Yorker, who says she had never even considered taking a job that involved getting dirty. Before nonghwal, she says, no one ever told her that farming was a viable career option. “But here,” she adds, “it allowed me to consider that possibility.” 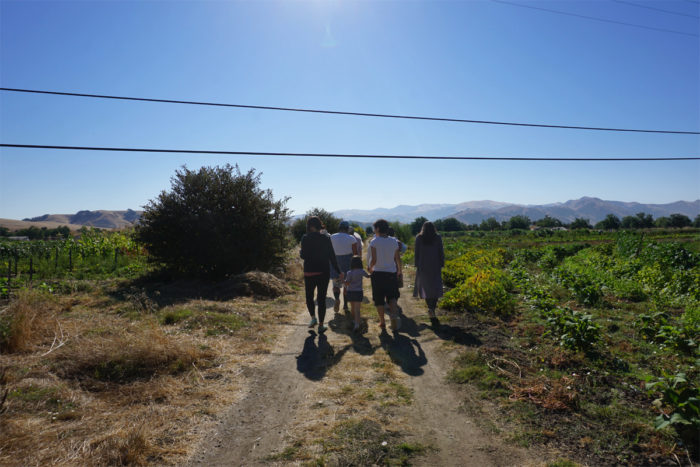