A New Report Chronicles the Hard Work of Making Your Milk

Groups in New York State have found that immigrant dairy workers face low wages and grim living conditions, and are organizing to fight for change. 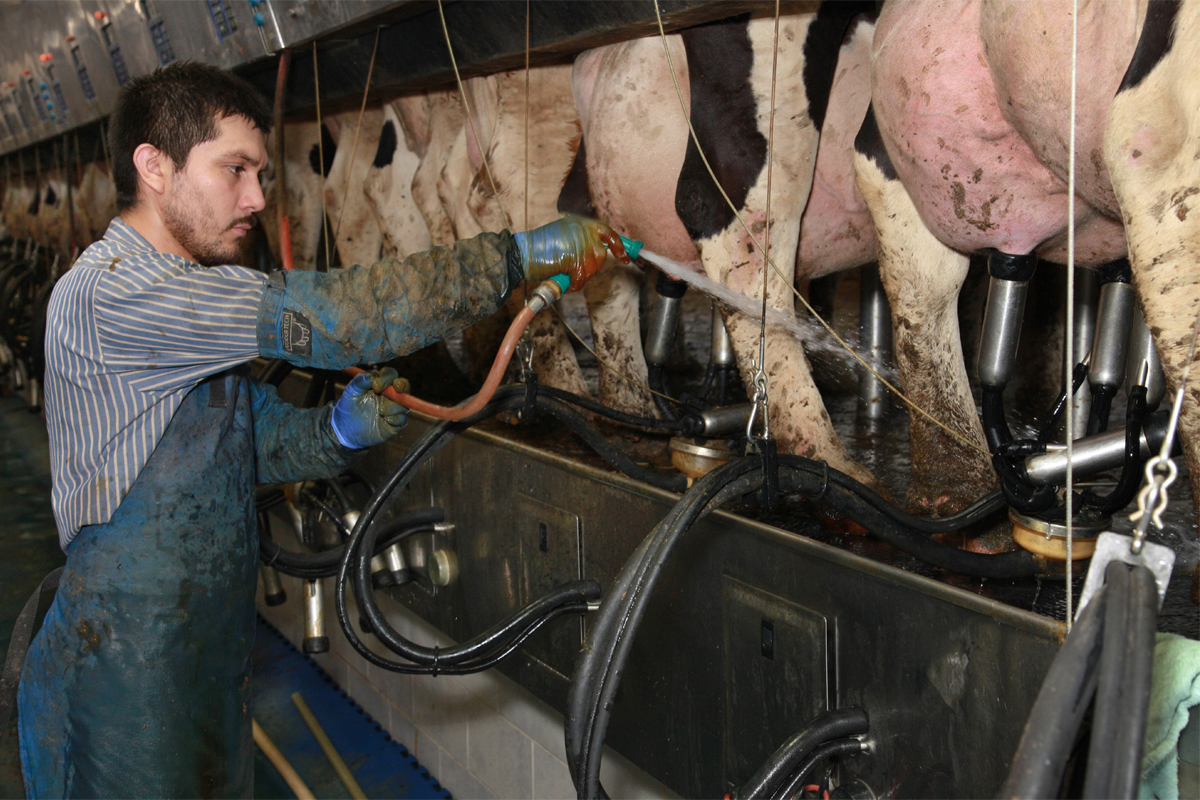 “It’s National Dairy Month, so the industry is celebrating their accomplishments,” Rebecca Fuentes said at a press conference at New York’s Syracuse University on June 1. “They celebrate the farmers, they celebrate the products—but we want to make sure this month, we also remember the workers.”

Created in collaboration with Worker Justice Center of New York (WJCNY), the report details the low wages, lack of labor rights, and dangerous working conditions faced by undocumented immigrant workers from Mexico and Central America who make up the vast majority of the industry’s workforce. And the findings align with many previous reports on what immigrant workers face in all different sectors of agriculture across the country.

Those conditions have been exacerbated in recent years, the report authors argue, as New York’s dairy economy has taken off in tandem with the Greek yogurt boom (the state is the number one yogurt producer in the country). The state’s dairy industry now generates $14 billion a year, and the increased pace of production has spurred consolidation and scale—in other words, bigger farms pumping out milk as quickly as possible.

“The underbelly of that is an industry able to sell milk at the price it sells it at because we’re dependent on a population that’s very vulnerable,” said Carly Fox, an advocate with the Worker Justice Center who also worked on the report. “People are not aware of what goes into the production of milk and how invisible the workers that produce that milk are.”

To compile the report, Fuentes, Fox, and other collaborators interviewed 88 immigrant workers on 53 dairy farms across New York between 2014 and 2015. Interviews and focus groups were conducted in Spanish with participants who were 90 percent men and 93 percent undocumented.

Overall, the findings painted a picture of workers living an isolated life on farms, working long hours for low wages while fearing injury, deportation, and even death.

Average pay hovered just above minimum wage, with an average 12-hour work day and very few (if any) breaks. The majority worked six days a week, while 10 percent worked all seven days. Twenty-eight percent also experienced wage theft, reporting they were paid less than they were owed or not paid for extra hours worked.

Two-thirds of workers experienced injuries, 68 percent of which were serious enough to warrant medical attention. One-third received no job training of any kind, which the report argues often leads to serious injuries related to operating machinery and handling chemicals.

Marco Antonio, for example, came from Guatemala and worked at a family-owned organic dairy farm for three years. In 2014, at age 31, he was killed in a grain silo while cleaning an auger, a job he had not been trained to do. His death was not an anomaly; according to statistics cited in the report provided by the New York State Department of Health, there were 69 farmworker fatalities in the dairy industry between 2006 and 2016.

Nearly all of the workers surveyed (97 percent) also reported living in on-farm housing provided by their employer. That living situation, paired with the inability to obtain drivers’ licenses and fear of immigration enforcement, means workers rarely leave their employers’ property (the average time without leaving the farm was a little over 11 days), which affects mental health, too. Sixty -two percent reported feeling isolated; 80 percent reported feeling depressed.

Nearly all participants (88 percent) said they thought their bosses cared more about the cows than workers.

The New York Farm Bureau, which represents the interests of farmers in the state, disputes many of the reports findings. “There have been many other comprehensive farmworker surveys done on the issue … that show a much different picture than what the farmworker activists have provided,” said public affairs manager Steve Ammerman, who pointed to a 2016 survey done by researchers at Cornell University.

That report surveyed about twice as many workers, but on fewer, generally larger dairy farms and in just one region of the state. Its findings show about the same average hours and wages as Milked, but reported that the workers interviewed were mostly satisfied with their working conditions and many received benefits like “employer-paid beef” and vacations. For instance, 44 percent of the people surveyed said “nothing was difficult or that everything was good.” It did not ask questions about quality of housing, safety and injuries, or fear of deportation.

Ammerman also said New York has “some of the strongest worker protection laws in the country” and that the Farm Bureau has been working with farms to improve conditions further through programs like checklists for farmers related to housing conditions and human-resource issues, and helping workers access additional safety and equipment trainings through the New York Center for Agricultural Medicine and Health.

The Right to Organize—and More

“This report tells you the stories and struggles, but it tells you also how we are fighting back,” Fuentes added later at the press conference.

One former dairy worker, Crispin Hernandez, described how in 2015, he held a meeting for workers to discuss organizing during free time in a trailer at Mark’s Farm in Lowville.

“The son of the farm owner found out about the meeting in the trailer and called the police,” he said. “State and county police arrived at the meeting. We were there for approximately half an hour being interrogated by them. Next time we decided to have a meeting … our other coworkers didn’t show up because they felt intimidated.” 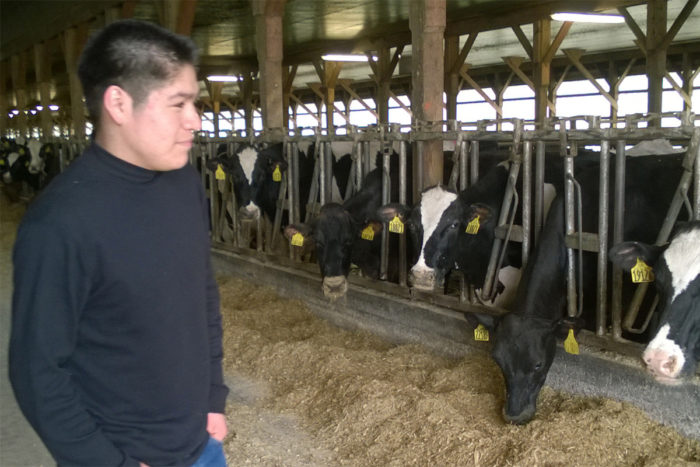 Because the Trump administration is not likely to change those exemptions at the federal level, the report focuses on changing the laws in New York. The Farmworker Fair Labor Practices Act would grant those protections to farmworkers but is stalled in committee. Meanwhile, Hernandez was part of a case brought before the State Supreme Court at the end of July, in which the New York Civil Liberties Union argued the exemptions for farmworkers were unconstitutional.

The state did not want to defend the exemptions but allowed the New York Farm Bureau to take up the argument. Its lawyers argued farmworkers should not have the right to collectively bargain because the nature of agriculture doesn’t allow for a standard eight-hour workday. “A farmworker strike or confining work agreements can jeopardize a crop or the health of an animal,” the organization wrote in a press release on the case.

As of the end of August, lawyers from the New York Civil Liberties Union representing the workers confirmed they were still waiting on the judge’s decision and that it “could come at any time.”

The report also advocates for passing a bill already in the works in the New York state Assembly that would make it possible for undocumented immigrants to get driver’s licenses in New York, since mobility could help ease workers’ isolation on farms. Twelve states and Washington, D.C. already allow undocumented immigrants to obtain licenses. There’s a precedent, too; Dairy farmworkers who were part of Vermont’s Milk With Dignity activist campaign were involved in fighting for a similar law there, which passed in 2013.

Finally, the report argues, one reason dangerous working conditions continue is that 90 percent of farms are exempt from oversight by the Occupational Safety and Health Administration (OSHA), since the law that established the agency gave a pass to farms that employ fewer than 11 “non-family” workers. Small farms, in other words, are entirely unregulated, and activists say the New York State Department of Labor should assume responsibility for inspecting them for health and safety violations.

One way she and Fuentes are doing that through WCCNY and WJCNY is calling on yogurt producer Chobani to set standards for the farms they buy from in the state. So far, the company has agreed to a meeting. (Vermont again provides a parallel: dairy farmworker activists there have been pressuring Ben & Jerry’s to sign on to the Milk with Dignity campaign for several years.)

But, Fox said, producers are more likely to sign on if they know the people who buy their products demand that the workers behind their milk, yogurt, and cheese are treated fairly.

“Every label is all about how they treat the cow, how local is the milk, the environmental impact, the small family farm,” Fox said. “There’s never anything about labor, ever. In this whole wave of ethics, we’ve got this brainwashing that the workers don’t matter.”

“This milk comes from the cows,” said an unnamed worker quoted in the report, “but people need to know that immigrants are the ones who milk the cows.”

Photos courtesy of the Workers’ Center of Central New York and the Worker Justice Center of New York.