The USDA’s Only Urban Ag Outreach Coordinator Grows in Brooklyn 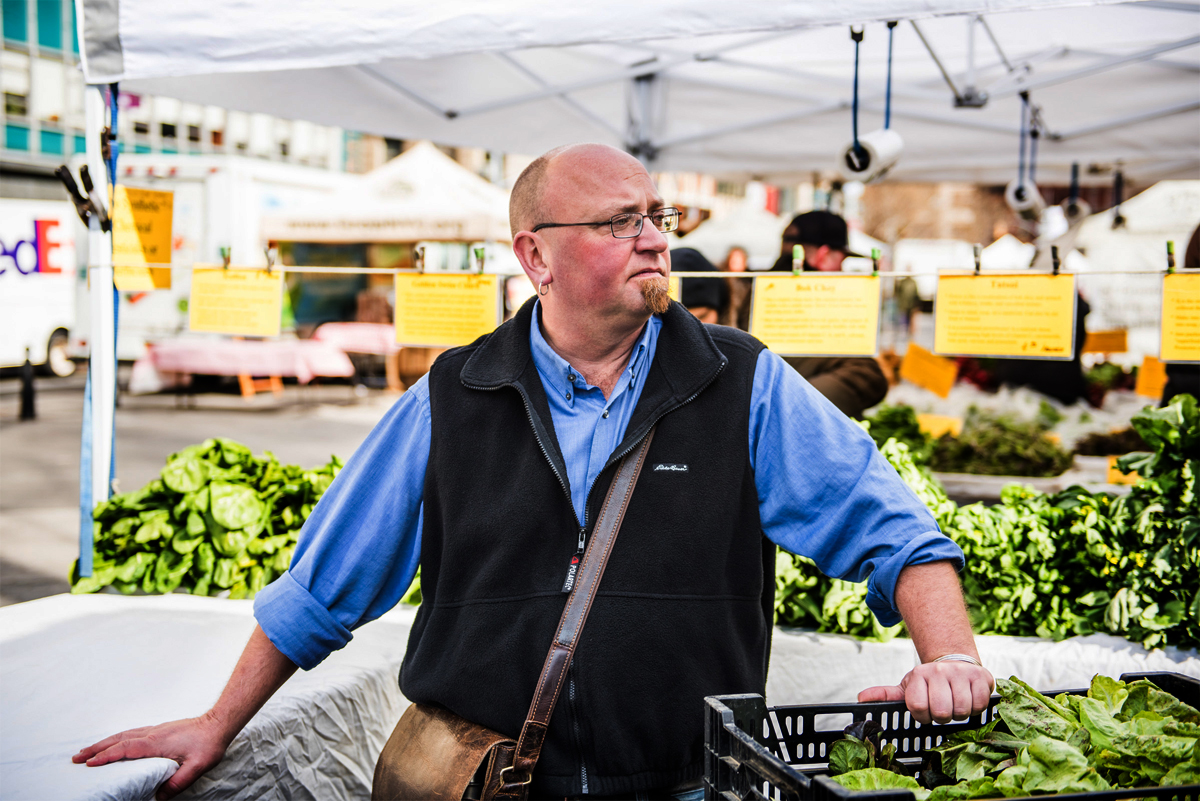 For budding urban farmers, the toolkit suggests the first step is to register with your local Farm Services Agency (FSA) office. Yet farmers in most U.S. cities may notice a disconnect. To register, Los Angeles farmers need to head up to the semi-obscure community of Lancaster, in the Antelope Valley of the western Mojave Desert. In Chicago, you have to schlep out to the small Illinois towns of Oregon or New Lenox. In fact, besides NYC, virtually all U.S. cities have their FSA offices outside the urban bubble.

In New York, however, you need go no farther than Brooklyn.

Late last year, the USDA created an FSA outreach coordinator position in the city, the first of its kind. It was a significant hire, albeit one that occurred without much fanfare. The experimental gig went to Ian Marvy, a founder of youth-led urban farm and food justice nonprofit Added Value Farms in Red Hook. It’s uncharted territory.

Before continuing, a little backstory on the FSA. Founded to combat rural poverty during the Depression, the FSA (formerly Farm Security Administration) was originally tasked with securing arable land for disadvantaged Americans. After a variety of mission shifts and bureaucratic reshuffling over the decades, this arm of the USDA is now in charge of administering loans and insurance programs—often to large, commodity operations in rural America. But as farming operations continue to build in metro areas across the nation, the USDA has slowly recognized the need to provide resources for urban farmers.

“I don’t see [my new position] as some kind of test run for the USDA,” says Marvy, whose position is up for review after one year. “Think of it as a statement on the agency’s growing support for urban agriculture.”

The original job listing stated the purpose is to “promote and facilitate access to FSA programs and loans to new and beginning farmers, urban farmers and underserved participants of farmers’ markets.” Thus Marvy has spent a lot of time networking since he was hired last December. He makes the rounds at farmers’ markets around the city, visits rooftops and greenhouses and takes meetings at his office near the Barclay’s Center in Brooklyn (55 Hanson Place, if you’re looking). He also aims to help rural farmers who sell their products here.

Urban agriculture is by no means new to New York. Urban historians will note agrarian roots dating back centuries (Hint: Sheep Meadow in Central Park was more than a cute name). Fast way forward to the 1970s and a grassroots, reclaim-our-streets style of urban ag took root in the Bronx, with farms popping up in vacant lots all over the borough.

City farming and community gardening continued to grow in dribs and drabs over the ensuing years, punctuated with a notable aspirational boom in the last decade. Now, while community-focused plots still abound in the boroughs, there is also a bumper crop of vertical agriculture entrepreneurs—who often also identify as tech companies—looking to cash in on the allure du jour of local food.

At a recent visit to Smallhold—a state-of-the-art computerized mushroom producer inside Bushwick shipping containers—Marvy spends most of his time asking founder Andrew Carter about operations, growing matter and technical details. Sometimes the 44-year-old Marvy can sound like a former rocker recounting his time in a glamorous band; he often starts sentences with, “Well, when I was at Added Value….” It was his experience helping run that storied Red Hook community farm—from its 2001 founding until several years ago—that laid the groundwork for his current role. 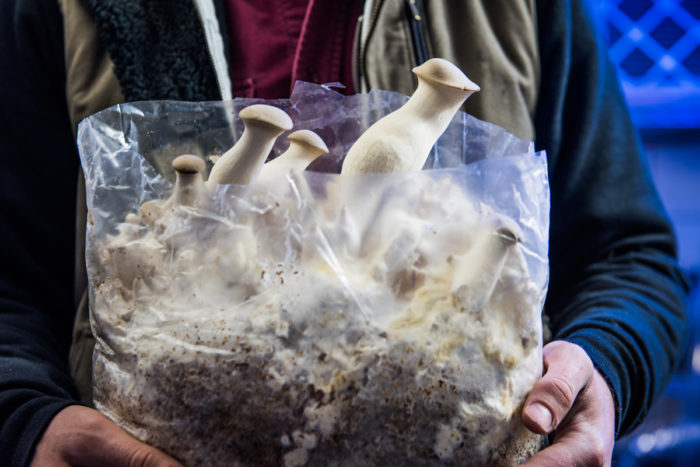 Marvy’s Added Value history gave him connections in New York’s urban ag community, as well as operational knowledge. It also made him something of a controversial choice for the coordinator position; he left a string of mixed impressions throughout the local urban agriculture community. (Every source contacted for this story who knows Marvy from this time declined to go on record to discuss past interactions.) Additionally, some local farmers and farm activists thought it tone-deaf to hire a white man for Marvy’s new role when the city’s existing urban agriculture scene has strong, experienced leadership from minority communities.

In fact, the USDA has a complicated history with minority groups, with multiple lawsuits over the years contending nonwhite farmers were discriminated against for loans and other assistance. The FSA now explicitly gives “special emphasis on providing loans to beginning, minority and women farmers and ranchers,” according to its website. Marvy concurs that assisting historically disadvantaged groups is one of his implicit tasks.

To David Vigil, project director at East New York Farms! (a nonprofit with almost two decades of history in the borough), government agencies currently seem more interested in supporting slick, tech-heavy operations with an eye on scaling up (see: Smallhold). “It’s nothing against farms like that,” he says, “but they are not the ones who typically need the most assistance. These farmers—and honestly many of them seem more like Silicon Valley startup types—are often white, male, and are already plugged into a network of resources.” 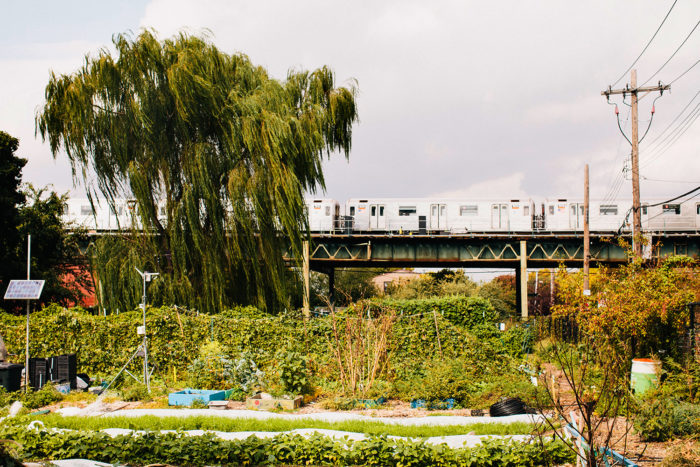 When Marvy is asked about the optics of yet another white male being hired from among a diverse applicant pool, he shrugs a little sheepishly. “I do understand those concerns,” he says, “I really do. That’s why I try to get out there and listen to a wide range of farmers, with different backgrounds and goals and ways of farming.”

Some minority farmers say they have yet to meet Marvy since he started his position, despite significant needs. Yemi Amu, cofounder of Oko Farms in Bushwick, says she could certainly use financial aid for expansion plans and for operational expenses. She has yet to hear from Marvy, though, and isn’t holding her breath. She says the USDA has traditionally been more focused on rural, soil-based operations. (Oko is an aquaponics farm.) “[Marvy] should be reaching out, introducing himself, meeting farmers here in the city,” she says. “There aren’t that many of us!”

Marvy would counter that he’s gradually making the rounds, but that he is still fairly new on the job. He cites a Nigerian farmer who moved to NYC this year after his wife got a job at a hospital. This farmer had experience raising poultry but wasn’t sure how to get started here in the city. Now Marvy said this man is on the fast track to a possible GrowNYC farm apprenticeship program, and will hopefully be looking at purchasing or leasing some form of land here for the 2019 growing season.

Marvy’s main means of assistance is helping connect farmers with loans and other government credit and insurance, but he also claims to help navigate the USDA’s complex bureaucracy (depending on how you tally it, there are 14 to 21 sub-agencies). He’s been working with a Bangladeshi businessman in Queens who would like to produce gourds and hot peppers not readily found in the U.S. Marvy acts as this aspiring farmer’s case manager; he refers him to different agency reps for all his operational, permitting, research and other questions.

“I’m less like a plumber with one kind of wrench,” he says, “and more like a guy with a huge toolbox. (laughs) Heck, you’d need a truck for a toolbox this big.”

The FSA position is contracted through the beginning of December. After that, Marvy is unclear whether it will be renewed especially in light of budgetary uncertainty facing many federal agencies. That said, he feels he’s building momentum and truly hopes he can continue in this role.

“There are so many resources out there for urban farmers right now,” Marvy says. “It’s just a question of connecting them with the right people.”

Jesse Hirsch is formerly the print editor of Edible Brooklyn and Edible Manhattan, and now works as the New York editor for GOOD magazine. Read more >