How Feeding the 5,000 is Serving up Big-Picture Change | Civil Eats

How Feeding the 5,000 is Serving up Big-Picture Change

A food waste fighter and an entrepreneur are demonstrating that all food has power and all people have potential.

By Tristram Stuart and Robert Egger 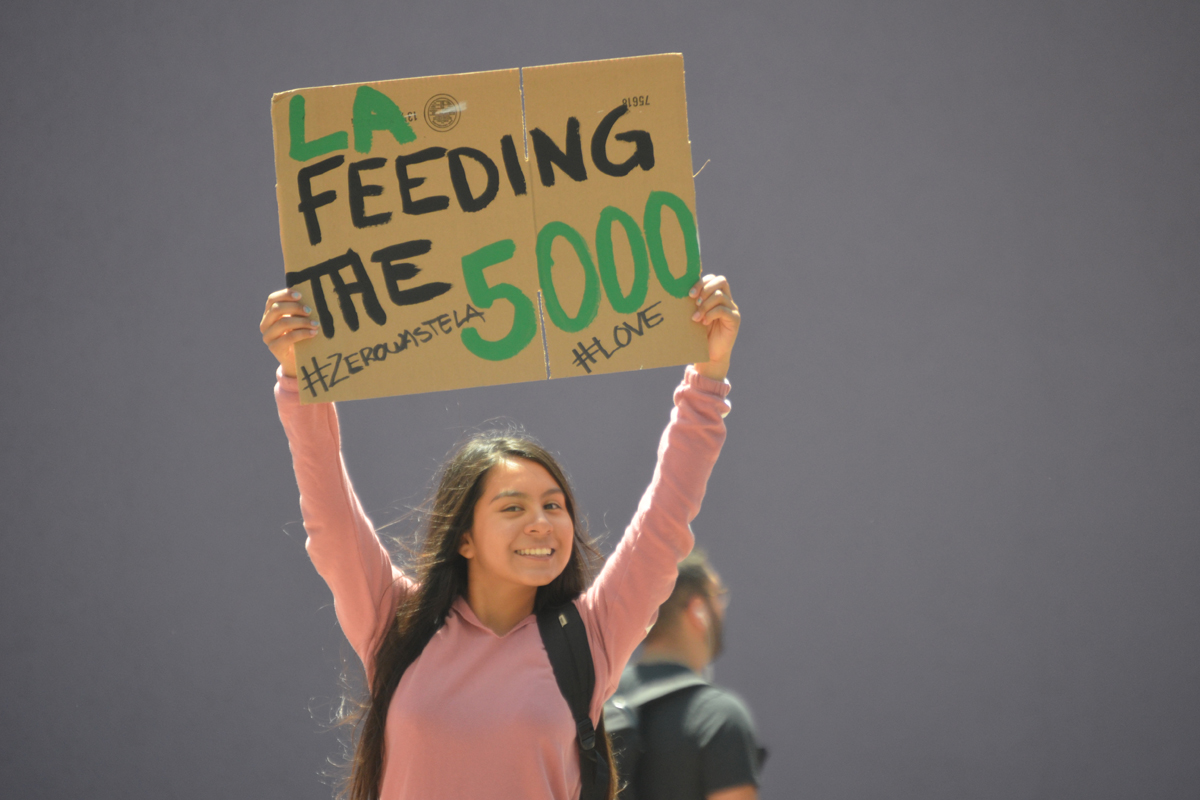 If you think your last dinner party was chaotic, consider the UK-based organization Feedback, which serve meals to 5,000 people at a time. Since 2009, Feedback has been traveling the world to host several feasts a year made with food that would have otherwise gone to waste.

For their latest Feeding the 5,000 meal, the group descended on downtown Los Angeles, where a handful of local chefs and more than 200 volunteers prepared 5,440 lunches using nearly 13,000 pounds of rescued produce. They partnered with L.A. Kitchen, a nonprofit that trains people to cook with discarded food. 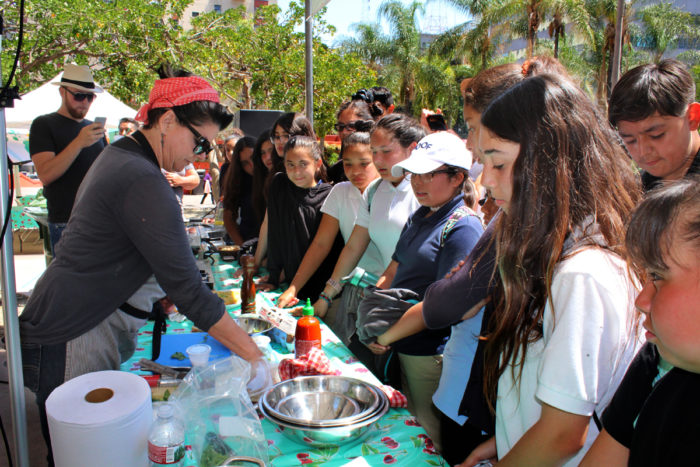 Civil Eats spoke with Feedback’s founder, Tristram Stuart, and Robert Egger, the founder and president of L.A. Kitchen, about the long road to solving hunger, reducing waste at the source, and other keys to systemic change.

How did you two meet?

Tristram Stuart: I knew about Robert years before he ever heard of me. I wrote about D.C. Central Kitchen in my book, Waste: Uncovering the Global Food Scandal. We first met in person in 2014, when Rob came to Feedback’s first U.S. Feeding the 5,000 event, in Oakland, California. I think he was surprised and impressed to watch me standing on the street corner for hours on end explaining to random passersby what we were doing and why. Then, when I launched Toast Ale—which is turning leftover bread into craft ale and diverting profits to help charities fight food waste and hunger—Robert sent me the kind of message that only Robert could write. It was full of colorful language about how this solved food recovery organizations’ big embarrassment: too much bread!

Robert Egger: I ran nightclubs before I launched D.C. Central Kitchen back in 1989, with food from the inauguration of Bush. Since then, I’ve tried to incorporate a showman’s flair into my work, to ease the “ashes and sackcloth” image of charity, and lure folks into seeing/thinking about things that might not be that appealing: prison, addiction, homelessness—or food waste. That’s why I wanted to meet and work with Tristram…he has that same street-theater mindset that realizes you sometimes have to lure the horse to water, and also trick it into drinking.

How have Feeding the 5,000 events—which feed many people all at once—helped spur ongoing systemic change in the cities where they take place?

TS: Each Feeding the 5,000 event—and there have been over 40 since 2009—is a many-headed hydra. While feeding people is at the heart of why the events work, and have worked so well, in so many different contexts, the food saved through the meal itself is a very small piece of the puzzle.

The organization I founded, Feedback, is all about using our expertise and partnerships to catalyze a food waste movement around the world, one that will build and grow to suit local circumstances and opportunities. Feeding the 5,000 is a way to bring together organizations already working on different aspects of food, focused on the environment or social justice, and uniting them around the shared food waste.

When corporations and governments continually see the demand for change in the media, they approach Feedback and other organizations and ask, “What do we have to do to solve this problem?” That’s how we have successfully shifted corporate and government policies on food waste worldwide. For instance, after the Feeding the 5,000 Dublin event, two groups—Food Cloud and Bia Foodbank—came together under one brand, FoodCloud Hubs. The CEO of the new FoodCloud organization told me that Feeding the 5,000 was the first time they all worked together, and it helped them realize their shared commitment and passion for solving the problem of food waste in Ireland. 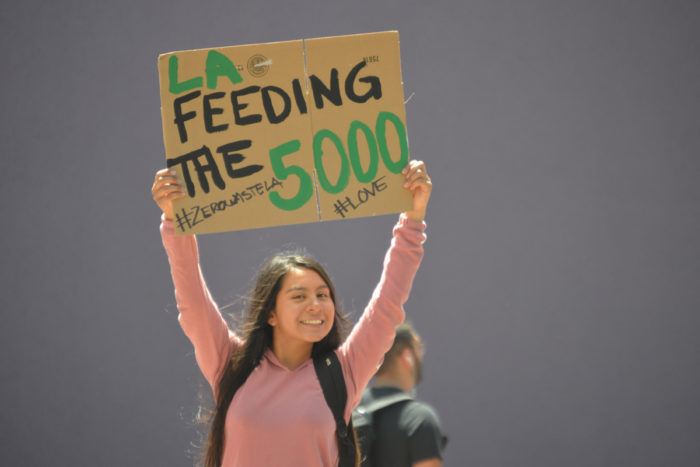 In L.A., we were lucky to work with L.A. Kitchen, which really gets our approach to food waste: it’s a cause in itself, but also a way into inspiring action on other causes: water waste, climate change, food insecurity.

RE: Both of us have been in the “see what we waste” business for a long time, each in our own way, trying to get the issue out front of society. While we were working our metaphorical fingers to the bone, an unexpected thing happened: A new generation of people came of age, hell-bent on addressing climate change and environmental degradation. I don’t think either of us saw this army on the hill, racing towards this cause. I’m really excited by the energy being revealed, and the thousands of new allies and ideas coming forward every day.

What major challenges does your team face when putting these events together?

TS: The Feedback team has triumphed over challenges ranging from the bizarre to the ridiculous (i.e., sourcing fish heads on the eve of the event). But the one thing that usually isn’t difficult is finding enough food that would have otherwise have been wasted. In L.A., the organizations we worked with to source the ingredients for the feast spoke of the abundance of fresh produce available in wholesale markets—almost to the extent that there’s more than can be practicably redistributed.

Sometimes, especially in cities like L.A., where there are major problems with homelessness and food insecurity, it can be difficult to convey that the event is not just about the problem of food being wasted when people are going hungry. What we also want to convey is that the sheer scale of food waste is so scandalous that prevention measures must be considered alongside redistribution.

RE: I love producing large amounts of beautiful food. I’ve been at the helm of programs that have produced 5,000 meals a day for more than 25 years. First at D.C. Central Kitchen, and now at L.A. Kitchen, where after less than two years we’re producing more than 2,000 meals a week. But both of us are trying to make a bigger imprint than merely feeding a gob of folks for the day; we’re trying to use food to reveal bigger truths and opportunities. There’s a great group I’ve always dug, Food Not Bombs. Well, for folks like Tristram and me, food is a bomb—it’s an intellectual hand grenade, and if it’s used on purpose, for a purpose, you can really shake things up.

Do you want to say anything else about preventing waste in the first place?

TS: A narrow debate about redistributing food is exactly what we strive to avoid. Feeding the 5,000 has always been about bringing people together to communicate a structural and environmental issue. Feedback has looked closely at the structural causes of food waste—issues like unfair trading practices and high cosmetic standards that incentivize overproduction. The problem with prevention at the moment is that so much food waste is hidden and the reasons it occurs poorly understood—that’s the main reason why we need businesses to commit to much more transparency about their waste.

Another missing piece of the puzzle is looking at redistributing food waste to feed animals, not just people. The Pig Idea is a Feedback campaign calling for omnivorous ruminants, like pigs, to be fed food waste that has been treated to make it safe for them. You would save millions of trees from destruction to make way for soy farming for animal feed.

RE: This is where we have divergent missions. I dig the need to decrease waste, but I also realize how many people are hungry, and more importantly, how many will become hungry as the global population ages. While I have never believed we can feed our way out of hunger, I do believe that we can use food to achieve bigger things, like decreasing unemployment (by training folks or creating jobs), or raising awareness of the power of community by getting folks to glean, prep, or serve food side by side with people who are poor.

I work with seniors now—not exclusively, but that’s who’s going to be poor in America next. And while I want to use wasted food to keep them active and healthy, I’d love to help build a political bridge between older and younger voters. There might not be a lot the two groups can agree upon, but food policy could be one. So for me, food waste can be used to create political alliances that can really foment change.

What’s the end game for you? Are you seeing any significant reversal of the numbers in the cities you visit?

TS: Yes, you might say this is the “end of the beginning.” There’s now a UN global goal on food waste, supermarkets boast about how little they waste, governments like the U.S. have adopted national targets to halve food waste. It certainly isn’t the Cinderella issue it was when I started campaigning in 2009. While we aren’t directly planning any Feeding the 5,000 events in the near future, we get expressions of interest all the time from all over the world. Currently there are events in discussion in Stockholm and Pittsburgh. There’s also a one happening in Munster, Germany in September—again, run by independent groups from Feedback, but based on our successful model. We offer toolkits to help anyone organize a Feeding the 5,000 or Disco Chop. 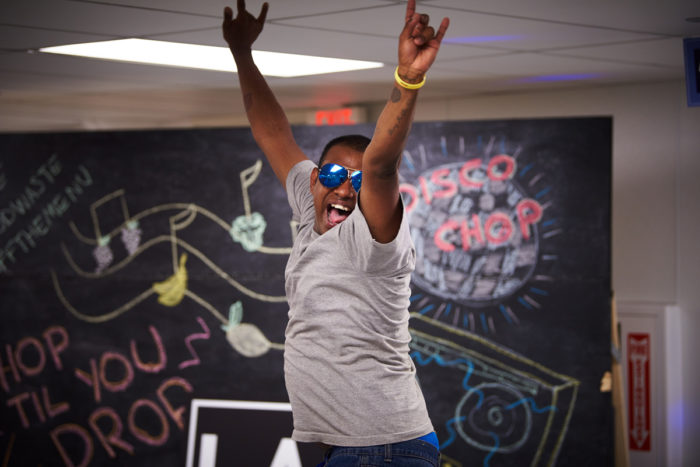 But this is really the moment to intensify action, not slacken up. We mustn’t allow real action to disappear under a cloud of corporate platitudes. Feedback has been repeatedly calling on supermarkets to be transparent about how much they waste, and very few actually answer that call. Campaigners, businesses and social enterprises that target food waste, like Toast, need detailed information about where and how food waste occurs across the supply chain in order to tackle it effectively.

And we must not overlook how corporate behavior can affect food waste in households. Standardized date labels are just the beginning of encouraging people to be less trigger-happy when throwing food away, and to buy what they’ll eat and eat what they’ll buy. Consumers can change dramatically—and in the UK they have. It’s now about keeping up that trend. And as climate change becomes an inexorably more urgent issue, emphasizing that major transformation in our food system is an essential ingredient in preventing catastrophic climate change.

RE: I’d love for people to see that, as bad a food waste is, we shouldn’t be wasting people; in prison, on the streets, or locked out because they are old. I’d like to use the food we have to help people see that, if you look past that bruise, that blemish, those scars we all carry, then what might be revealed is a world in which all people have a role, a value, and something to contribute. In our kitchen all food has power and all people have potential. We just try to reveal both, to as many as possible, every single day.

Tristram Stuart is an international award-winning author, speaker, campaigner and expert on the environmental and social impacts of food waste. Read more >

Robert Egger is the Founder of the DC Central Kitchen, which developed the first 12 week culinary curriculum for people who had been homeless. He is also a Founding Board member of the World Central Kitchen. Read more > 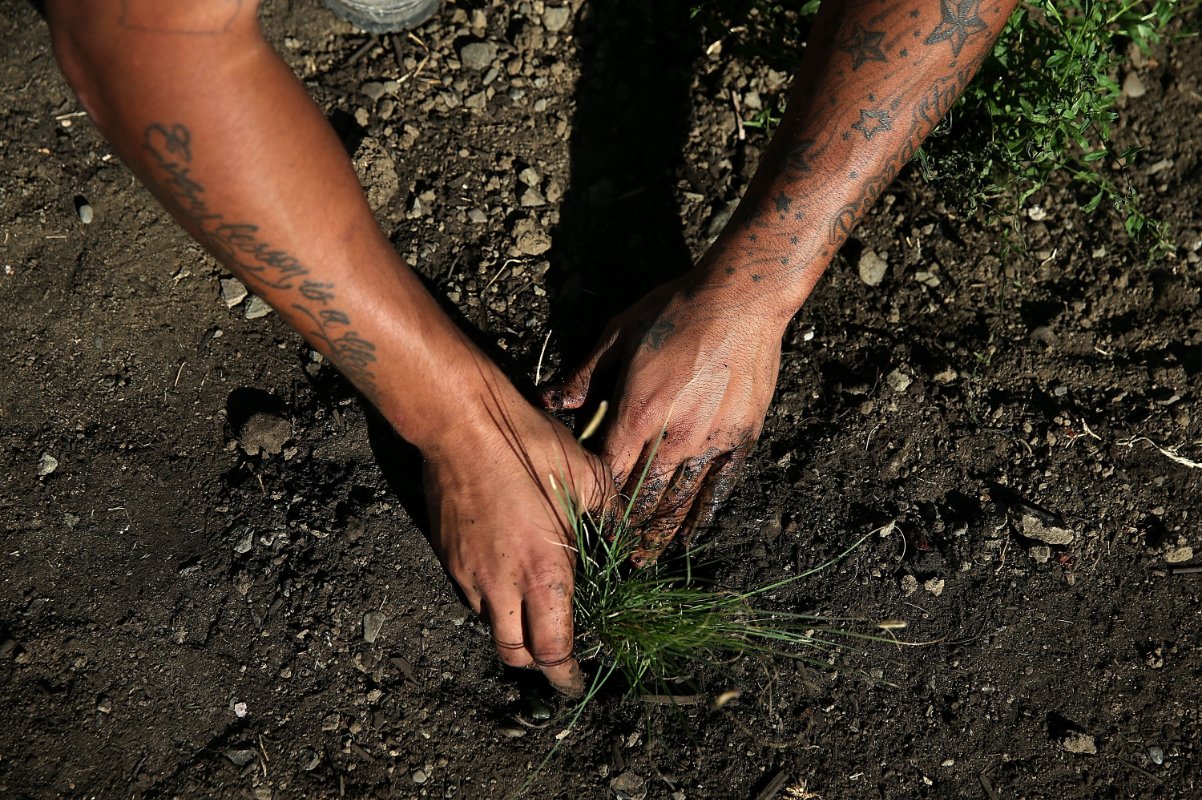