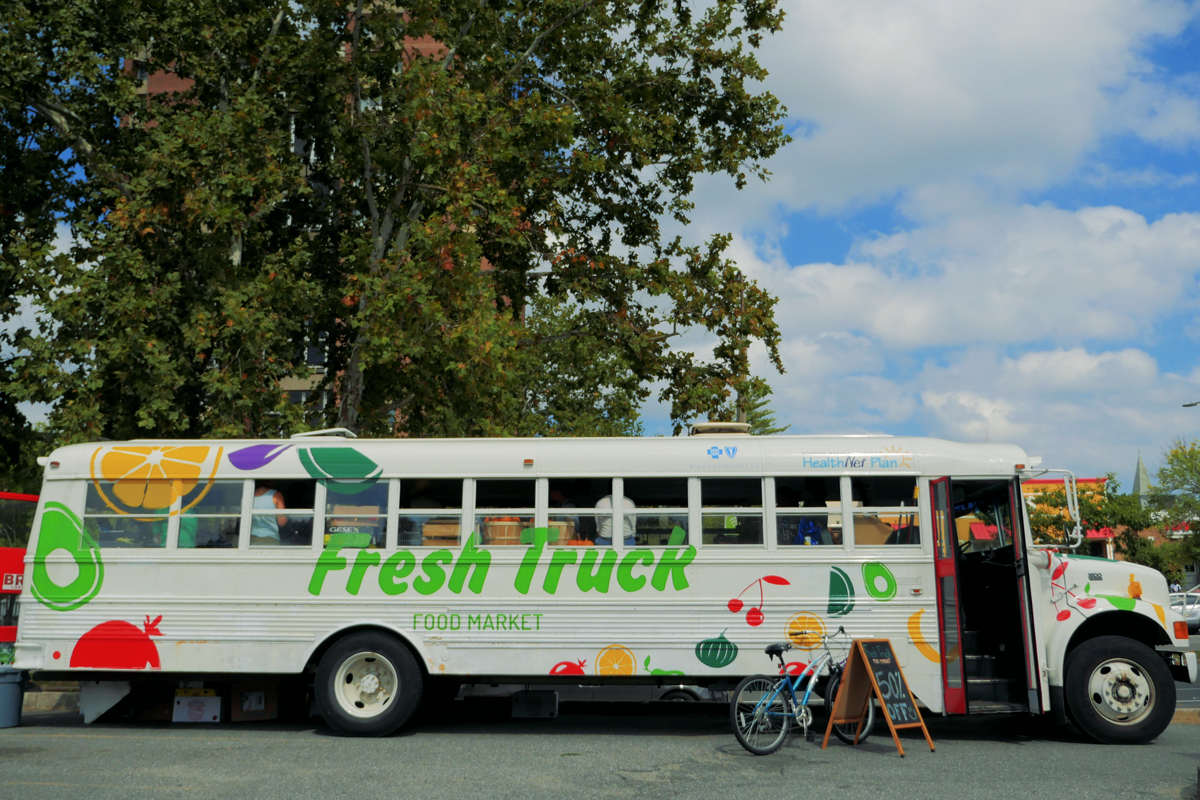 Every Friday afternoon at 3:30 p.m., a school bus parks outside the South End Community Health Center in Boston, opens its doors, and invites local residents to come inside and purchase groceries.

Fresh Truck is more than just a mobile supermarket, however; the nonprofit is working to get nutritious foods into the hands of people who lack access. Unlike traditional supermarkets, the shelves of the old bus are stocked with fresh fruits and vegetables and devoid of salt- and sugar-laden processed foods; shoppers can use cash, debit/credit, and EBT state welfare benefit payment cards.

Executive director Josh Trautwein came up with the idea for a mobile fresh food market while coordinating nutrition education for a Boston health center. “At the time, the only grocery store in the neighborhood closed down, so there was a big gap in our programming,” he recalled. “We were encouraging families to eat healthier, but there was nowhere close by for them to shop.”

Fresh Truck launched in 2013 with a mission to improve the health of Boston residents. The nonprofit’s two school bus-based markets make 11 stops throughout the city each week, mostly in low-income neighborhoods and food deserts where residents lack access to fresh foods and often resort to purchasing their groceries from corner stores with limited selection.

Betty Akpan says her diet has improved since she started receiving weekly $10 vouchers from South End Community Health Center in 2016. “I’m a senior citizen on a fixed income and the vouchers help a lot,” she said.

Thanks to the vouchers, Akpan can often purchase enough fruits and vegetables for several meals. Fresh Truck has a better selection than local food pantries (where Akpan can usually only get potatoes and onions) and the prices are lower than the local supermarket. “I use the vouchers and even spend a little of my own money when I have it,” she said. Convenience is also a factor: instead of taking a bus several stops to get to the supermarket, Akpan walks to Fresh Truck.

To further its impact, Fresh Truck introduced FreshRx in 2015, a program that accepts “prescription” gift cards from local partners in exchange for produce. Through the program, healthcare partners identify a group of patients who receive a FreshRx card for $10 per week in groceries. Fresh Truck records the patient transactions and sends data back to healthcare providers to help them study outcomes.

To date, the nonprofit has sold more than $100,000 in fresh food through the FreshRx program.

Building on a Nationwide Trend

Supermarkets on wheels started popping up almost a decade ago. New York City appears to be one of the first to use mobile markets to improve fresh food access in underserved areas through its Green Carts initiative. Since then, mobile markets have launched in several cities, including Farmshare Austin in Texas and Arcadia’s Mobile Markets in the Washington, D.C. area.

Despite the rising popularity of mobile markets, research on the trend has uncovered mixed results.

A report published after the inaugural year of the Green Carts program found that neighborhood residents relied on the fresh fruit and vegetable vendors for their produce needs and cited convenience and price of produce as the main drivers for purchasing produce from mobile markets.

One United States Department of Agriculture report found that those who shopped at mobile markets ate more fruits and vegetables, but often lacked the motivation to cook or the cooking skills to prepare fresh produce. Other research found that improving access to nutritious foods failed to change purchasing and consumption habits, in part because processed foods are cheaper and more convenient.

Trautwein acknowledges the challenges of creating a new model to improve food access. But he also recognizes the need to bridge the gaps in the system. Food pantries, he argues, offer limited fresh produce, and the fresh fruits and vegetables that are abundant at farmers’ markets are perceived as out-of-reach, pricewise.

In an attempt to avoid the pitfalls that have befallen mobile markets in the past—as well as challenges Fresh Truck had encountered, including building brand awareness and a setup that makes it impossible to sell refrigerated items such as meat and dairy—the startup is constantly evaluating operations and customer needs, which led to the development of cooking education and nutrition literacy programming.

“We would love to see families in a few of our different locations shopping for more nutrient-dense greens—like kale and collard greens and spinach—and less fruit,” Trautwein explained.

To boost sales of under-performing produce, Fresh Truck introduced a Vegetable of the Month program that includes fun facts about the food, simple suggestions to prepare it, and sales to encourage shoppers to purchase the produce. The nonprofit also hosts cooking demonstrations and other special events in conjunction with community partners like the YMCA and Boys and Girls Clubs.

“It’s a long-term play, but we are trying to help our families get to a place where they’re developing a more balanced diet and repertoire of cooking skills,” Trautwein said. “We see part of our job as helping our families shift their habits around how they shop and eat.”

South End Community Health Center has been participating in the FreshRx program since 2016. Patients are given weekly prescriptions for fresh foods, along with a $10 voucher and recommended shopping list from a staff doctor or nutritionist.

“Our approach to healthcare is to address the social determinants of health,” explained chief operating officer Karen van Unen. “By making access to healthy, fresh, low-cost produce available to patients and the larger community, we help to at least minimize one barrier to healthy lifestyles.”

The hope is that subsidizing fresh foods can help address a root cause of nutrition-related illnesses like heart disease and diabetes.

So far, FreshRx has proven popular with patients: Fresh Truck processes more than 110 transactions during its three-hour stop at South End Community Health Center on Friday afternoons, and the average shopper spends an additional $2 (above the value of their prescription voucher) on fresh produce.

Trautwein believes that partnering with healthcare providers and promoting “prescriptions” for fresh foods fuels the narrative that food should be an integrated part of preventive medicine and treatment. Another effort is currently being explored in California that would deliver prescription meals to those with chronic illnesses. In order to expand the “food is medicine” conversation and grow FreshRx’s impact, Trautwein hopes to expand Fresh Truck’s partnerships with local healthcare organizations.

“There is a fascinating shift, a realization that the healthcare sector needs to do more work to contain healthcare costs related to more upstream causes of poor health,” Trautwein said. “Our healthcare stakeholders are really excited about the fact that we’ve introduced this agile, pretty cheap solution to address the fact that people can’t always afford healthy food.”