What Our Tap Water Says About the Way We Farm 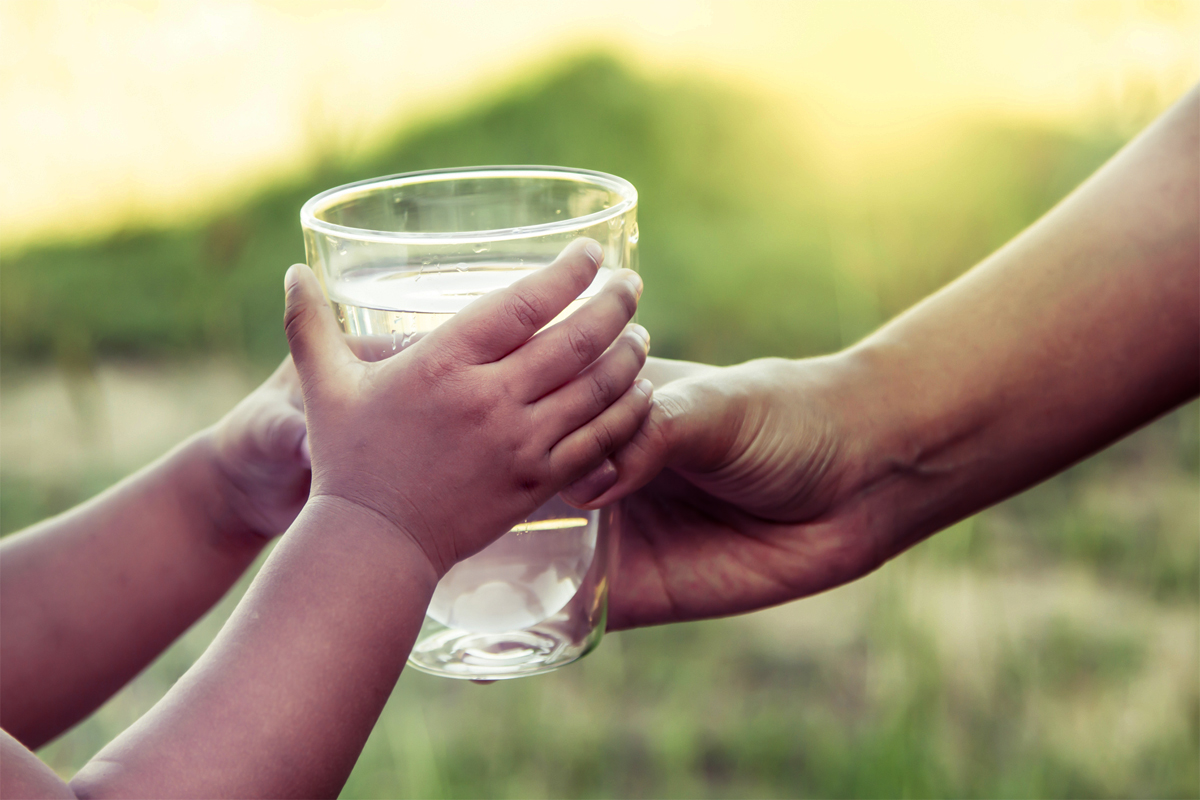 When the news broke earlier this summer that cancer-causing chemicals had spiked in my local tap water, I was alarmed. But, like many of the 1.4 million people living in Oakland, Berkeley, Richmond, and a number of other cities on the eastern slopes of the San Francisco Bay Area impacted by the news, I wasn’t sure how concerned I should be.

“The water is safe to drink,” a water district spokesperson told the East Bay Times. But there are “risks of consuming it over a lifetime,” she added.

The contaminants in question are called trihalomethanes (THMs), a byproduct of the disinfectants used to kill organic matter in water. And, according to Craig Cox, senior vice president for agriculture and natural resources at the Environmental Working Group (EWG), byproducts like these are increasingly common.

“If the water has high levels of organic matter—which in most cases is algae—[utility districts] will disinfect the water,” Cox said. “It’s a real conundrum for these facilities because they have to disinfect it to prevent a huge public health threat. But the trade-off is more chronic health threats because so many of these byproducts are carcinogenic. So they don’t have a lot of good options.”

Rather than relying on water treatment, says Cox, the real solution is to prevent the flow of pollutants and farm runoff—phosphorous and nitrogen both fuel algae growth—from entering the nation’s watersheds in the first place. (Doing so would also help slow the growth of the annual dead zone in the Gulf of Mexico, which scientists have estimated will be third largest on record this year.)

Cox has been especially immersed in this challenge over the last year, as he and other scientists at EWG have worked to put together a national Tap Water Database, which debuts today. Curious consumers can drill down into what exactly is in their tap water—from industrial pollutants, to runoff and treatment byproducts—by interacting with a map of the U.S. or entering enter their ZIP code into a field on the site’s homepage. 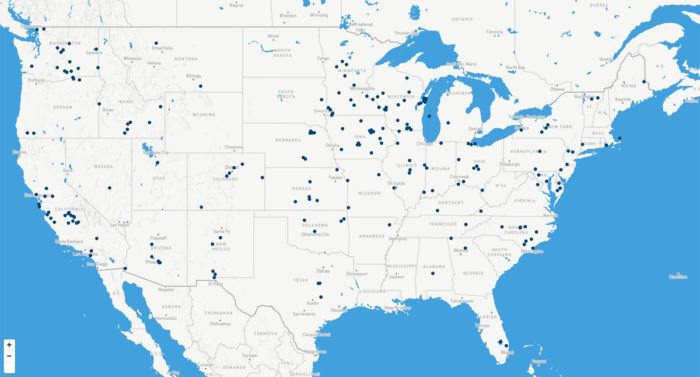 After recent incidents in urban areas like Flint and Toledo, some may assume that tap water contamination happens mainly in cities. But rural areas often face as many—if not more—contaminants from agriculture (here’s their map of Nationwide Incidences of Farm Pollution). In fact, as Cox pointed out, much of the pollution in urban areas is from farms. “Agriculture works its way into a high percentage of our water,” he said. And it’s not surprising, he added, since well more than half of the entire U.S. is farmed, and what happens on that farmland “has a really profound effect on water quality.”

Perhaps one of the best-known examples of this is in Des Moines, Iowa, where the city’s utility district, the Des Moines Water Works, recently filed high-profile lawsuits against three farm counties in an effort to put a stop to agriculture pollution entering their district. The suit was widely opposed by the agriculture industry and eventually dismissed this March, but the utility is still in a difficult position. In 2015 alone, it spent $1.5 million to remove nitrates from the water.

That year, says Laura Sarcone, communications specialist at the Des Moines Water Works, their nitrate-removal facility—one of the world’s largest facilities of its kind—ran for a record-breaking 177 days. “It was built to run for a few days a year,” she said in a recent phone call. “We are literally running it to the ground in order to remove the nitrate and meet the safe drinking water standards.”

“Most industries in the United States have to pay when they pollute,” added Sarcone. “But for some reason on the water quality side, that’s not the case in the agricultural industry. So we are constantly monitoring, analyzing, treating extensively and expensively to remove agricultural contaminants that shouldn’t be there in the first place.”

The industry, meanwhile, contends that voluntary farm-level strategies—such as those put forward in the elaborate Iowa Nutrient Reduction Strategy—are on the way to solving the problem. The strategy includes everything from timing fertilizer applications differently to planting buffers and creating wetlands around the edges of farms and using bioreactors that filter the water through woodchips.

“The lawsuit dismissal means the focus should return to collaborative approaches, working together to improve water quality,” Iowa farm bureau president Craig Hill told a local farm publication in April. And while Sarcone and a number of environmentalists don’t think those efforts have gone far enough fast enough, some farmers do appear to be taking the call seriously.

Take Wade Dooley. I visited the farmer on an unseasonably warm February day in Albion, Iowa, and he pointed to a field of rye grass he had planted in the fall as a cover crop. Dooley and his dad grow mainly conventional corn and soybeans and run a cow-and-calf operation on their sixth-generation family farm, right alongside the Iowa River.

They graze their cattle on the rye, but it also served to protect the soil from erosion and help absorb excess fertilizer and nutrients left over from last year’s crops. He plants rye and other cover crops in the fall so they have a chance to develop their root systems—“just a solid green carpet, green and thick”—before the cold weather arrives.

“Every acre I crop is covered,” Dooley told me. He also saves the seeds to sell to other farmers for additional income, and has encouraged several of his neighbors to consider the practice. Dooley is an active member of the Practical Farmers of Iowa (PFI), a nonprofit that has been working to expand cover crop acres in the state for the last eight years, during which the practice has grown from 10,000 acres to about 600,000 acres.

Considering the fact that water regulations have often garnered negative responses from farmers—and the push to kill the EPA’s Waters of the U.S. (WOTUS) rule may have helped drive the last election—this has been no small task.

But PFI doesn’t encourage farmers to plant cover crops purely to improve water quality. In fact, the practice has been shown to build healthy soil, reduce fertilizer and pesticide costs, provide forage for grazing animals, and boost yields—which are all also good for farmers’ bottom lines.

Of course, it’s not clear whether farmers will ever be able to stop agriculture pollution on their own. And while cover crops are the most successful strategy to date at managing Iowa’s nutrient problem, so far, 600,000 acres is a small percentage the state’s 30 million acres of farmland (not to mention the rest of the nation).

Who Will Pay for Clean Water?

In the meantime, other water utilities will most likely continue to pass the cost of treating tap water on to their customers. And while that may not be very costly to those of us in sizable metropolitan regions, it can add up quickly for rural residents.

“A lot of the people that are most exposed to contaminants in drinking water are in rural areas with small populations,” said EWG’s Cox. So while they may have access to treatment technology, they often have far fewer people to spread that cost around to. “These communities can really be hit hard by increased costs,” he said.

“I think nationally we, the industry, feel water is an undervalued resource,” said Sarcone. “People are willing to pay hundreds for cell phone minutes and unlimited data, or for their cable TV,” she added, but rarely do they tend to put the same value on clean drinking water.

And, as the EWG database illustrates, most clean drinking water isn’t always guaranteed to be safe over a lifetime if it has to be heavily treated. For that reason, the group has included a water filter guide on their site, to help concerned consumers “feel like they have immediate options,” said Cox. In the long term, however, even a top-of-the line reverse-osmosis system won’t solve our nation’s systemic water problems.

“The longer-term, more important goal is to try to get more focused on prevention, and getting contaminants out of the source water,” said Cox. For that reason EWG has also included several suggested policy solutions, such as strengthening state-level regulations in the absence of strong federal laws, and investing in infrastructure. The group also encourages consumers to “demand that our public officials at every level step up and fix this broken system.”