A High-Tech Solution to Seafood Slavery and Illegal Fishing

New science can track transshipping, the high-seas transfer of seafood catches between ships, but it may take consumer demand to truly halt it. 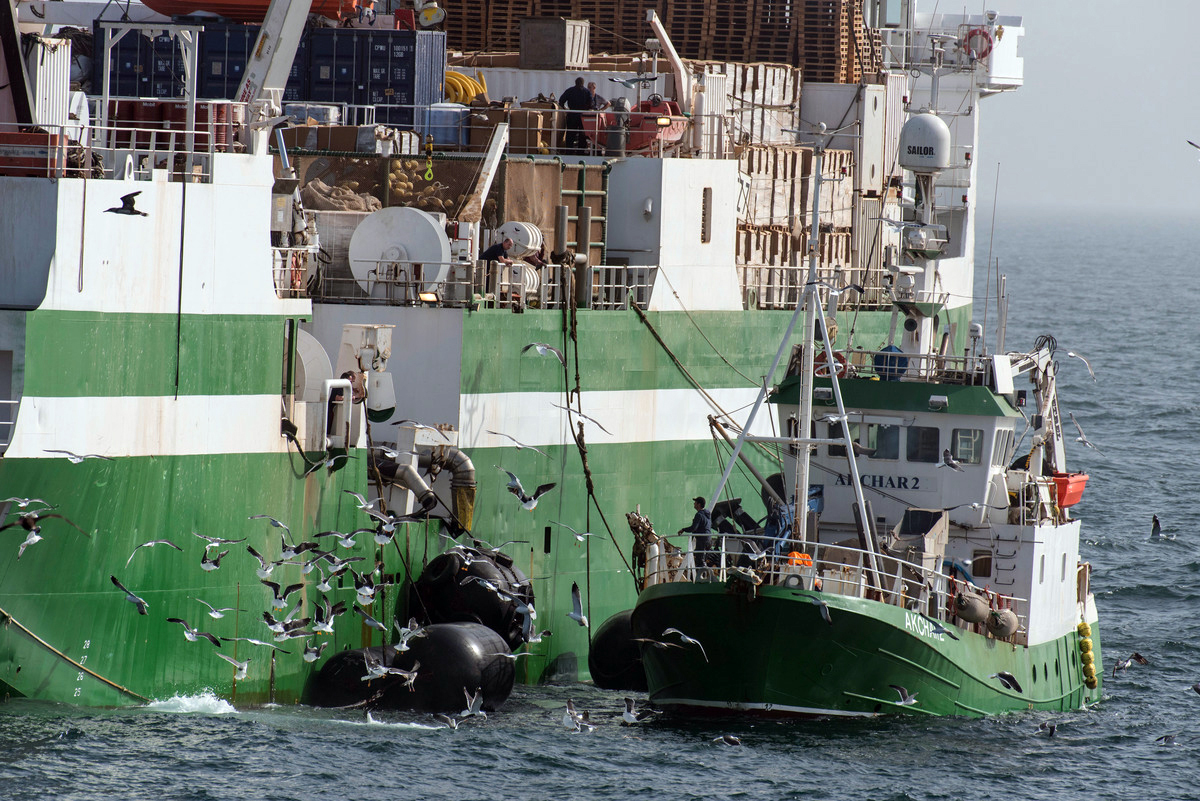 Inexpensive seafood can come at a high price. To make as much money as possible, it’s not uncommon for fishing vessels to spend more than a year at sea, fishing continuously, without supervision; some vessels spend as much as 525 straight days at sea, and others have logged 503 continuous days. This practice is only possible due to transshipment—the high-seas transfer of seafood catches between ships—and global fish stocks and human rights are taking the hit.

The U.S. is the world’s second largest market for seafood. Americans eat almost 16 pounds a year each, spending $96 billion (and that doesn’t include fish used in pet food). But 90 percent of that seafood is imported, and the odds are good that it was passed from one ship to another in international waters, where a whole range of illegal things may have happened.

Transshipment takes place when large fishing boats unload their catches to refrigerated cargo vessels, also known as reefers. It’s technically legal, and provides a cost-effective method for fishing boats to remain at sea and prolong their fishing trips without needing to head to port between catches. But because transshipment often happens far from monitoring eyes, it has also been linked to illegal, unreported, and unregulated (commonly referred to as “IUU”) fishing, along with human trafficking, slavery, and other criminal endeavors, including drug and illegal wildlife trade.

IUU fishing encompasses a grab bag of activities, not all strictly illegal. Fishing is illegal if it breaks national fishery laws or international fishing agreements—examples include fishing in prohibited areas or using illegal equipment. Unreported and unregulated fishing activities aren’t necessarily illicit—it might mean fishing in unregulated waters, or not reporting discarded fish. Illegal fishing can be difficult to accurately assess, but estimates say it’s responsible for $23 billion in economic losses.

In an effort to curb IUU, safeguard sovereign fish stocks, and strengthen ecological protections, NGOs and governments have taken an increasing global focus on transshipment practices in recent years. And several new projects are using technology to create the biggest and most accurate picture of transshipment to date.

Until recently, there was no global data on transshipment. A patchwork of regulation means there is no cohesive strategy and oversight, and no regulation that clearly explains what transshipment should and shouldn’t do, said Tony Long, director of the End Illegal Fishing Project at the Pew Charitable Trusts.

“Different countries have different resources and different capacities, and some have signed up to some agreements, some to other agreements, and some have signed up to none at all,” said Long. “So it’s an absolute playground for anyone who wants to take advantage of that situation.” Additionally, many transshipment reefers fly under Flags of Convenience, meaning they’re intentionally registered in foreign countries with lax regulations, a practice linked to problems ranging from labor abuses to safety violations.

A recent paper published in the journal Marine Policy examined high-seas transshipment (in ocean areas outside of territorial waters or exclusive economic zones) and regulations in 17 regional fisheries management organizations (RFMOs), and assessed the potential advantages of stopping the practice altogether. While there have been more regulations created in the last 20 years and improved enforcement, according to the study’s lead author, Christopher Ewell, there has also been a “huge influx into the high seas by fishing fleets. As coastal waters have become overexploited, they’ve ventured off into the open ocean. People call it the ‘the last frontier.’”

How Technology Can Help

This uptick in open ocean activity has prompted a slew of new tracking efforts, including The Pew Charitable Trusts’ project managed by OceanMind (originally Eyes on the Seas), Fish-i, and Global Fishing Watch.

Global Fishing Watch was launched in 2016, and is a collaboration between conservation nonprofits Oceana and SkyTruth and Google. It uses automatic identification system (AIS) messages—the tracking system most ships have onboard to avoid at-sea collisions—to track commercial fishing and uncover possible transshipping events. The organization created a database of refrigerated cargo vessels, and then analyzed ship movements and behaviors to identify likely transshipments. The project has created the most comprehensive picture of ocean fishing ship movements to date.

Global Fishing Watch just released the first round of results. It gathered 21 billion AIS messages broadcasted between 2012 and 2016, and mapped 91,555 potential and likely instances of transshipment.

“As we worked with the data, we realized we could tell in many cases what a vessel was up to based on way the vessels were moving on the water,” said Amos. “It didn’t really hit home until we put their AIS data broadcast on a map.”

Lacey Malarky, an analyst of illegal fishing and seafood fraud at Oceana, and co-author of a report based on Global Fishing Watch data, No More Hiding at Sea: Transshipping Exposed, says that collecting this data at a global scale hasn’t been possible until now.

The biggest remaining challenge, however, is that boats can turn off AIS systems, meaning these results only provide a conservative estimate. “This data is just showing fishing vessels and refrigerated cargo vessels that had their AIS on, so it’s likely transshipping is happening on a much larger scale,” said Malarky.

Vessel monitoring systems (VMS) are another type of vessel tracking technology, but these are proprietary, expensive, and the data is usually kept private. Indonesia recently announced that it would be the first country to make all its flagged vessels’ VMS data public, and it’s now included in Global Fishing Watch data. Peru followed with a commitment to make its VMS data public.

Governments benefit from sharing this information because it can help monitor their own waters by increasing access to shipping data and put more eyes on vessel activity. In Indonesia, it could help make the country’s recent fishing reforms more lasting. “VMS data is an obvious way to give the public the ability to engage and monitor what’s happening and … have the public participate in exerting Indonesian sovereignty of Indonesian waters,” said SkyTruth’s Amos.

Should Transshipment be Banned?

Despite the increased attention to IUU fishing and human rights issues on boats, transshipment hasn’t been banned in most places. To date, only one regional fishery management organization has instituted a total ban, and six have partial bans. The biggest concern is the economic losses that could be incurred by making vessels return to port. And, as Ewell points out, the voting members of many management organizations are the heads of fishing companies. However, while ecological conservation and labor problems may not be at the forefront of their decisions, they tend to be sensitive to market forces. 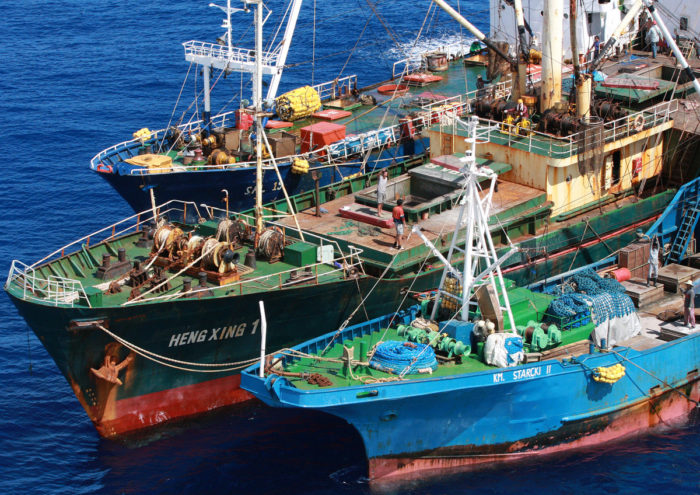 “As those companies face pressures based on consumer activism or increased attention around this issue, there could be a shift towards these kinds of bans,” said Ewell.

The best hope for cleaning up transshipment, said Pew’s Long, is to focus on the seafood economy, beginning with the markets. Explaining how illegal transshipping transactions could potentially taint every step of their supply chain, thereby putting their companies at risk, could persuade fishing companies to voluntarily commit to ethical transshipping contract terms.

The next step would be to convince policy-makers to comply as well, which is what the Port State Measures Agreement (PSMA) does, effectively creating a system of premium ports that commit to step up their patrolling for and seizure of IUU catches. (Japan recently ratified the agreement; the most popular transshipping ports have not.)

The good news is that some big companies are paying attention to transshipment. Nestlé, Mars, and Thai Union—which brings Chicken of the Sea tuna to American grocery store shelves and also provides fish products for major pet food brands—are a few of the major companies that have pledged to improve supply chain transparency and “reduce or eliminate” transshipped products.

The Global Fishing Watch site is free to the public, designed with the goal of making this information available to anyone who needs it, including curious consumers. Oceana’s Malarky hopes the tool takes off.

“We hope everyday citizens use it to become aware of where seafood is coming from, governments to monitor their waters and see where vessels are fishing within their [exclusive economic zones], and NGOs to advance their work,” she said.