After nearly a decade, Slow Food USA gathers this week in Denver to chart a course for the future of food. Movement leaders share their reflections, hopes, and concerns.

By Christina Cooke and Twilight Greenaway 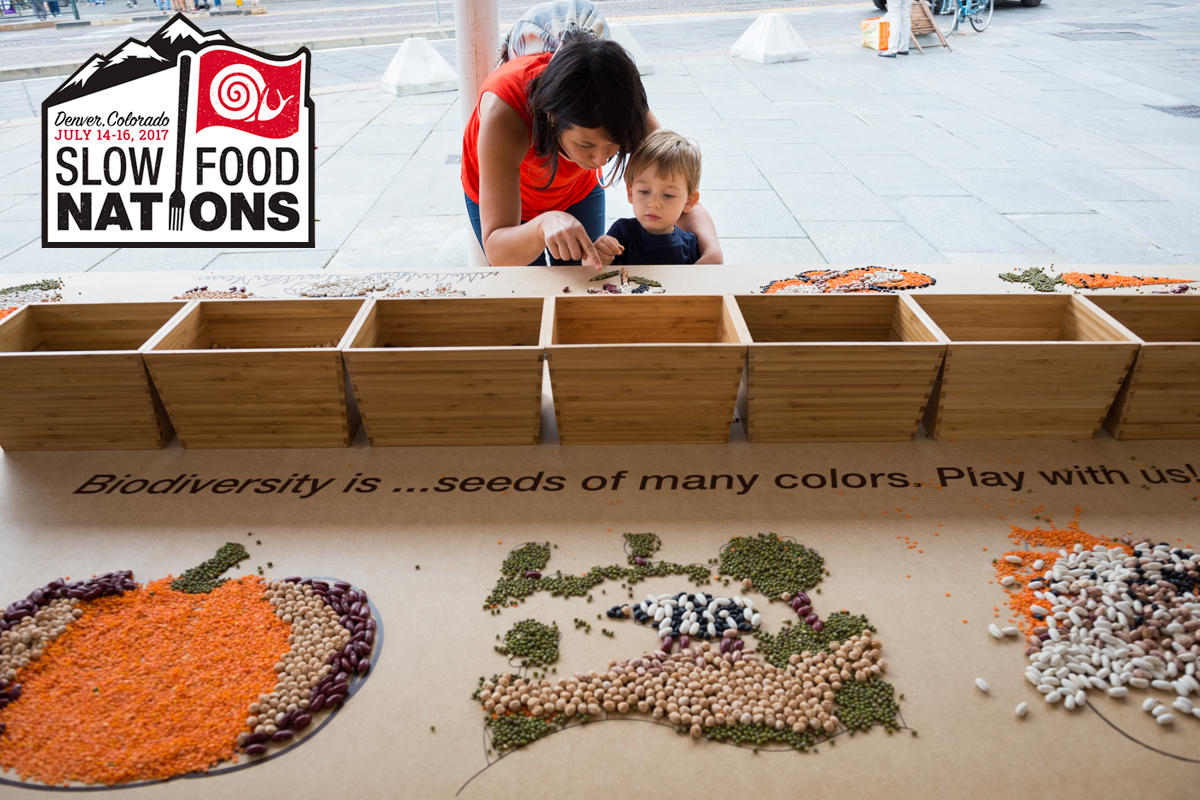 When an estimated 50,000 activists, eaters, and food systems thinkers gathered for Slow Food Nation in San Francisco in 2008, it was with the goal of “catalyzing a huge shift in how Americans perceive and prioritize food.” And, by many accounts, it worked.

Nine years later, farm-to-plate is a household term, but greenwashing and “localwashing” is nearly as abundant as farmers’ market kale. Nearly every week we hear examples of the way the food industry has responded to consumers’ questions about the source of their food—in both real and disingenuous ways. And after eight years of forward movement in Washington, D.C., the Trump administration is now hard at work to slash regulations and funding in rural areas, create a climate of fear among immigrant farmworkers, and do away with recent school lunch gains, potentially setting food systems progress back a generation.

It’s against this national backdrop that Slow Food USA, the domestic branch of the international group founded by Carlo Petrini, is hosting its latest national gathering. Slow Food Nations will bring together approximately 500 food and farm leaders from around the nation (and several from outside the U.S.) for an internal summit in Denver, Colorado, followed by a three-day street festival on July 14-16.

The plan, says Richard McCarthy, executive director of Slow Food USA, “is to reach those who’ve just come to the table and seek how best to navigate good food choices.” And with interactive workshops, tastings, farm tours, educational talks, and hosted meals, the organization will likely reach that goal. But at a time when food is one of the more accessible lenses on justice, the group—and the larger food movement—has higher ideals as well.

“Our goal is to present food as a bridge in this age of walls so that visitors can experience food traditions and the people they represent,” says McCarthy. The street festival includes several events focused on food sovereignty and food justice, thanks in part to partnerships with groups such as the Turtle Island Slow Food Association, which McCarthy describes as “a relatively new assembly of First Nations advocates and experts who are working for food sovereignty.”

Alice Waters, chef and owner of the iconic Chez Panisse restaurant in Berkeley, California, and founder of The Edible Schoolyard Project, is going to cook a meal for Slow Food leaders in hopes that she can encourage the group to get on the same page about the value of free, sustainable school lunch for all students K-12.

“I’m going to pretend they’re in sixth grade,” says Waters, who has served as a vice president of Slow Food International since 2002. “I’m going to serve them a Mexican meal like we could in a local school. I’ll buy all the food in Colorado and connect it to the academic study of the three-sisters agriculture—beans, corn, and squash growing together.”

The larger goal, she says, is to make school lunch an academic subject and a part of the curriculum. This provides a nourishing school lunch to all children and, most importantly, gives them time to sit down and eat together.

“These are essential places for social justice—at the school cafeteria table and in the fields,” she told Civil Eats. “When we provide our children with free school lunches and pay the organic farmers and workers fairly and directly, we are focused on ending childhood hunger and supporting the people who take care of the land. I would love for that idea to be embraced by the whole Slow Food movement, so we are all united and we’re going there together.”

The gathering in Denver will be a place to take stock of the last decade of change and growth in the good food movement. Waters points to the online Edible Schoolyard Network, which today consists of 5,500 school gardens, kitchens, school cafeterias, and academic classrooms worldwide, as an example of this very real momentum. 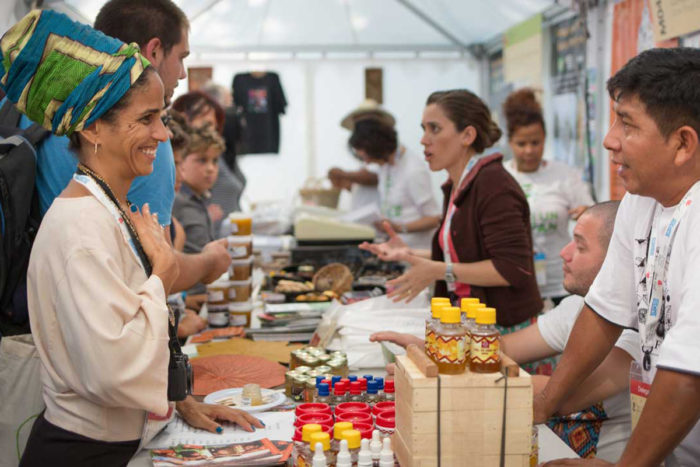 McCarthy says the movement should be proud of what it has accomplished. Ten years ago, “school gardens, DIY baking and canning, farmers’ markets as strategic mechanisms to trigger consumer change for vulnerable families … these were considered to be boutique, fuddy-duddy, or distractions from the real issues,” he says. But, he adds that “the combined effects of civil society persistence, growing market pressures, and occasional wise public policies have conspired to aid everyday people make the cultural shift to begin to value food differently in our lives.” These changes are especially remarkable given how little funding has gone into the effort, says McCarthy.

Chef and author Deborah Madison, who is participating at Slow Food Nations, has also seen an expansion. “There are competitive cooking shows, school gardens, more home gardens, greater awareness of GMOs and the dangers they represent to us and other living creatures,” she says. “There are now over 9,000 farmers’ markets, and for some there is much more awareness about where our food comes from and a keenness to know; for others, there is still a big disconnect.”

Waters agrees that not all the awareness is positive. She sees “greenwashing from fast-food companies that are trying to take the value of our movement and apply it to the way they’re selling food that’s not real, with an effort to deceive rather than inform.”

Slow Food began in 1986 when Petrini and a group of activists staged a protest at the planned site of a McDonald’s at the Spanish Steps in Rome. That history of resistance, says Ricardo Salvador, director of the Food & Environment Program at the Union of Concerned Scientists (UCS), offers an opportunity to continue thinking about what’s behind the curtain.

“That self-awareness and alternative worldview rooted in egalitarianism and ecology is needed now, as ever,” says Salvador, who will be speaking on two panels with his colleagues José Oliva of the Food Chain Workers Alliance (FCWA) and Navina Khanna of the HEAL Food Alliance. Both UCS and FCWA are members of the burgeoning alliance, which seeks to transform the food system from a perspective that is rooted in social and racial justice.

As Salvador sees it, the U.S. is at a crossroads and must decide “whether government exists to serve the public good and well-being, or to concentrate wealth and protect the interests of a plutocracy. Issues as fundamental as the survival of any semblance of democracy are at play in the evolution of the food system. Slow Food Nations should provide us all an opportunity to discuss these existential matters and develop shared strategies appropriate to our times.”

FCWA’s Oliva agrees. “Slow Food has grown—ideologically and materially—tremendously since its beginnings and is now poised to take on larger issues of inequity, ecological devastation, and overall health created by our current food system,” he says. With its hundreds of conviviums (chapters) around the nation, he believes the organization has the potential to “bring along millions of people into a deeper understanding of what is wrong with our food system and how it can be healed.”

Despite that, 86 percent of workers report earning subminimum, poverty, and low wages, resulting in high rates of food insecurity, Oliva adds, the people behind our meals are “still not at the forefront of most eaters’ minds when it comes to issues of equity or fairness in the food system.”

This vision would be a far cry from the wine-and-cheese-club image that Slow Food has often been subject to over the years.

“This caricature conforms rather nicely with similar arguments intended to discredit proponents of the soda tax, tobacco legislation, and other excesses of the ‘nanny state.’ So, first of all, it’s a purposeful and cynical portrait of us as elitists,” says McCarthy. And yet, he makes clear that the organization is still focused on promoting the idea of a universal right to pleasure, and the Denver event is clearly an effort to balance foodie culture (or cocktail culture) with more thought-provoking discussion. A group of coffee-focused panelists will look at the beverage through a climate change lens, for instance.

In the end, McCarthy is clear about the fact that the delicious part of Slow Food’s work is as important to the organization as the political. “[Slow Food’s] ideas are more relevant than ever before; and people are thirsting for change,” he says.

“However, it might actually be in the gentler side of our work where we matter most. People are overworked, overstimulated by technology and the 24/7 world, and desperately lonely. Food should be valued as a source for profound joy; it should be valued as an important sense of identity; and finally, it should be used as a bridge between people who’ve lost track of what we may have in common,” McCarthy says. “The growing interest in food as identity and entertainment is an opportunity to forge new ties, new shared history, and a new politics that finds place for people, their dreams, and hope.”