Should ‘Regenerative’ Agriculture Get Its Own Label? | Civil Eats

Should ‘Regenerative’ Agriculture Get Its Own Label?

Some groups want to compete with the organic label and raise the standards for eco-conscious consumers. But others worry that another label could end up sowing market confusion. 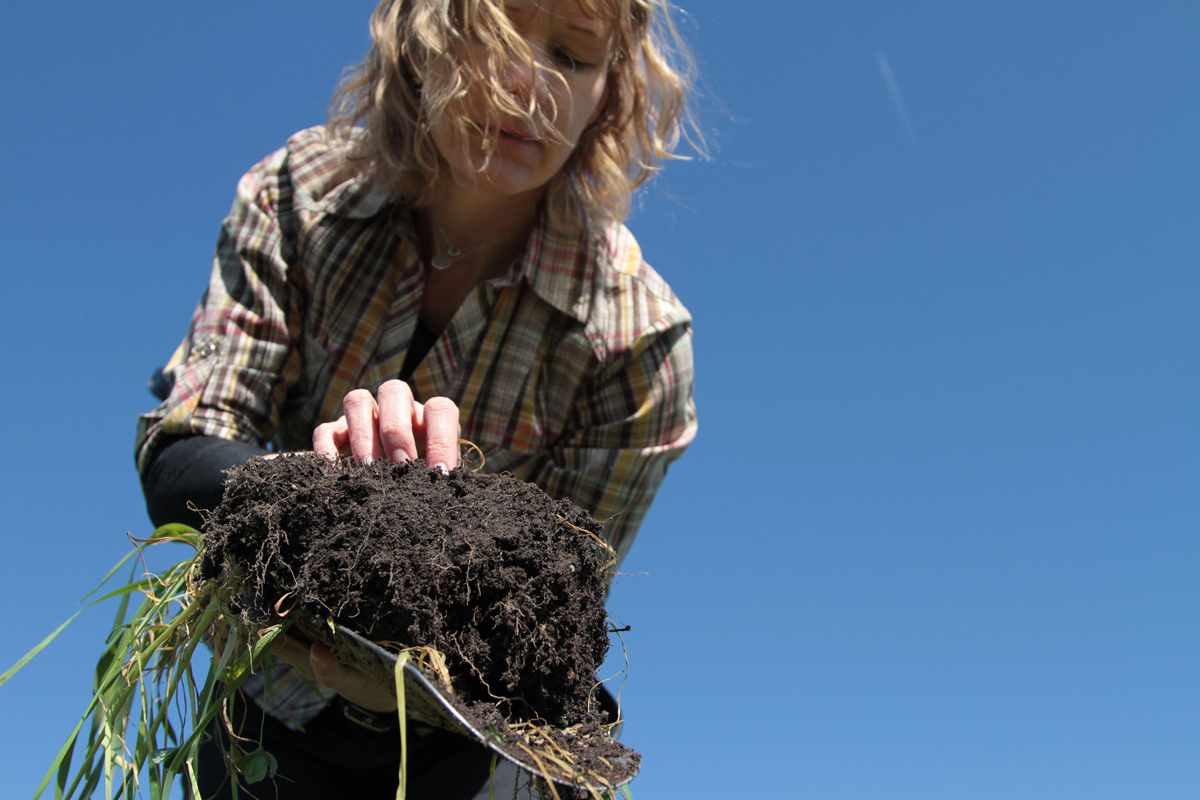 The soil at Adobe House Farm in Durango, Colorado, gets better each time the landscaping trucks, brimming with leaves from a nearby housing development, make a delivery. Linley Dixon, a farmer and soil scientist for the Cornucopia Institute, says that over the years the leaves have helped raise her soil’s organic matter from 2 percent to about 8 percent.

This is good for an obvious reason: Plants grow better in soil with high levels of organic matter. But soil fertility is a reliable indicator of something else, too: how much carbon dioxide the ground can absorb from the surrounding environment. Scientists have linked high atmospheric levels of carbon dioxide to a warming climate, so the more CO2 the soil can sequester from the air, the better. Research has also indicated carbon sequestration can replenish depleted carbon networks in soil.

Dixon practices a farming method she calls “regenerative agriculture.” She uses compost, cover crops, and tills only minimally. These practices have been around since at least the 1970s, and have often been described as organic or agroecological. But Dixon says that regenerative agriculture goes further than most organic farming, and she hopes to help bring the approach to the mainstream.

Dixon and other members of the movement have used the growing threat of climate change as their rallying cry. “There’s so much doom and gloom around climate change, so if you can come up with a solution, it’s absolutely exciting,” Dixon said. At the Cornucopia Institute, regenerative agriculture is touted as a protection for farmers against the floods and droughts that are becoming more frequent in our rapidly warming world.

Dixon and the Cornucopia Institute aren’t alone. The people behind Holistic Management International, the Carbon Underground, Green America, and the Rodale Institute are all working to make inroads to bring regenerative ag to the mainstream. In some cases, these organizations are in conversations with suppliers, regulators, and manufacturers to begin using the term as a label on food. And while it’s not clear that the market has room for another eco-label, some regenerative ag advocates appear to be pushing that agenda forward.

Because the U.S. Department of Agriculture (USDA) has oversight over the certified organic label, changes to existing rules have happened slowly. Case in point: The agency spent years working on an update to the animal welfare practices put forth in the current certification. Despite some momentum at the beginning of 2017, under the Trump administration it has been delayed several times. Similarly, while organic standards call for special attention to soil fertility, not all organic farms practice those techniques.

With a growing number of large producers transitioning some or all of their business to organic to capture the market, challenges to the label’s legitimacy have arisen, as evidenced by two scathing Washington Post investigative pieces spotlighting the USDA’s failure to regulate organic products.

Although organic sales are at a record high ($43.5 billion in 2015), the organic brand is struggling with a perception problem. A 2015 study by market research firm Mintel found that more than one-third of shoppers are skeptical that organic products are any better than conventionally grown food.

And even more are confused by alternative labels: A 2016 Consumer Reports survey found that 73 percent of consumers sought out products labeled “natural”—a label with no regulatory teeth—while only 58 percent look for organic products. This may be due in part to a 2012 Stanford meta-analysis study that found organic food is only slightly more nutritious than conventionally grown food, although the report’s methodology has drawn criticism.

“The organic certification is struggling. There are people who feel like it’s been watered down,” said Ann Adams, executive director of Holistic Management International. She also points to the fact that while less than 1 percent of farmland in the U.S. is certified organic, organic sales account for closer to 4 percent of the market. “Because we can’t produce enough of these organic products in this country, we’re importing a lot and people are looking the other way.”

And while foods grown using regenerative practices may help fill the void left by inadequate organic regulation, Adams said, it would likely be an uphill battle to convince consumers to buy them. “The number one reason people buy organic is for the health of their children,” she said, pointing out that some regenerative tenets—soil health and farmworker rights, for example—may be too abstract to win over organic customers.

But Larry Kopald, president and co-founder of the Carbon Underground, sees the climate argument as an effective marketing pitch for regenerative farming. According to its website, the Los Angeles-based nonprofit specializes in “crafting campaigns that motivate people to act,” with past clients including Honda, American Express, PepsiCo, and McDonalds. “We’d like to get to a point where we can hang a sign above the apples at the co-op that says, ‘These apples helped reverse climate change.’ The pressure that would put on the apples next to them would be immense,” Kopald said.

Carbon Underground is in the early stages of discussions with “investment and development people” to bring regenerative ag to the public consciousness. Kopald declined to give details, but said that the organization has worked with California State University, Chico and the National Co-op Association on the project and he hopes to achieve “significant scale” within five years.

One key challenge facing Kopald and other proponents is the question of certification. Should such a certification fit within the confines of the existing National Organic Program, for instance? The answer depends on whom you ask.

“Most people feel there needs to be a certification or a label to let people know the food they’re buying is making the planet healthy and reversing climate change,” Kopald said. “But there is certification burnout out there.”

Urvashi Rangan, former executive director of the Consumer Reports Food Safety and Sustainability Center and a current consultant on sustainable food systems, said a regenerative product label could legitimize the movement. She stressed, however, that products would need to be undergirded by a set of “meaningful” standards.

“You want to make sure it’s not being watered down,” she said. “What we need to avoid is a bunch of regenerative claims where consumers have to decide, ‘Is that one meaningful or not?’”

Rangan said a regenerative product label “probably” will crop up in the relatively near future, and that there may be more than one—at least at first.

Improving Organic vs. Competing with It

At the Rodale Institute in Pennsylvania, executive director Jeff Moyer wants to use regenerative ag to help raise the standards of the National Organic Program. The Institute is uniquely positioned to make that happen, since founder J. I. Rodale popularized the term “organic” in the 1940s and Robert Rodale began using “regenerative” in the 1980s.

“We want to be very cautious and maintain ownership of the word regenerative and link it to organic as a baseline,” Moyer said. “We’re well aware of what happened to the word ‘sustainable’—it was a buzzword and it became so watered down it became meaningless. There’s going to be a battle for words and language expressed over the next few years.” That battle could manifest itself in the form of a trademark, he said.

Moyer said Rodale is also in discussions with “specific partners” in the marketing and food industries regarding regenerative, but gave few details. A Rodale spokeswoman said, “there will be some big announcements with really well-known brands and some products that are going to be on the market.”

Laura Batcha, CEO and executive director of the Organic Trade Association (OTA), said, “from our perspective, organic is regenerative.” Organic growing practices already facilitate carbon sequestration, she said; a forthcoming study by the OTA’s Organic Center and Northeastern University is expected to show higher levels of sequestration in organic soil than in conventional soil.

As far as the possibility of regenerative products competing for consumer dollars with organics, Batcha questioned the movement’s ability to mobilize an effective label, standards, and verification system. “Building up a private label and a standard and getting that in the marketplace in a way that breaks through with the shopper is no small task,” she said.

On a similar note, Adams of Holistic Management International doubts that federal certification for regenerative producers would be effective, and Linley Dixon of the Cornucopia Institute says that while a certification and label are feasible, she dreads the idea of a more complicated marketplace.

Before the movement can make a dent in the market, proponents need to agree on key points, said Anna Meyer, food campaigns director for Green America. “We’re all coming from a place of wanting to do things better, but if we can’t clearly specify what we’re asking for and if we’re asking for 10 different things, it really dilutes the messaging and it does more harm than good.”

For now, regenerative agriculture will be resigned to the liminal space of the agriculture world, and will remain essentially unenforceable in the marketplace until there is a meaningful standard with third-party certification. Consumers can still interact with farms directly and ask producers about their growing practices. And, regardless of the outcome, the dialogue is an important one.

“We’re starting to have these discussions,” Meyer said. “And that’s good, though those are also challenging conversations to have.”

Photo CC-licensed by the U.S. Department of Agriculture.