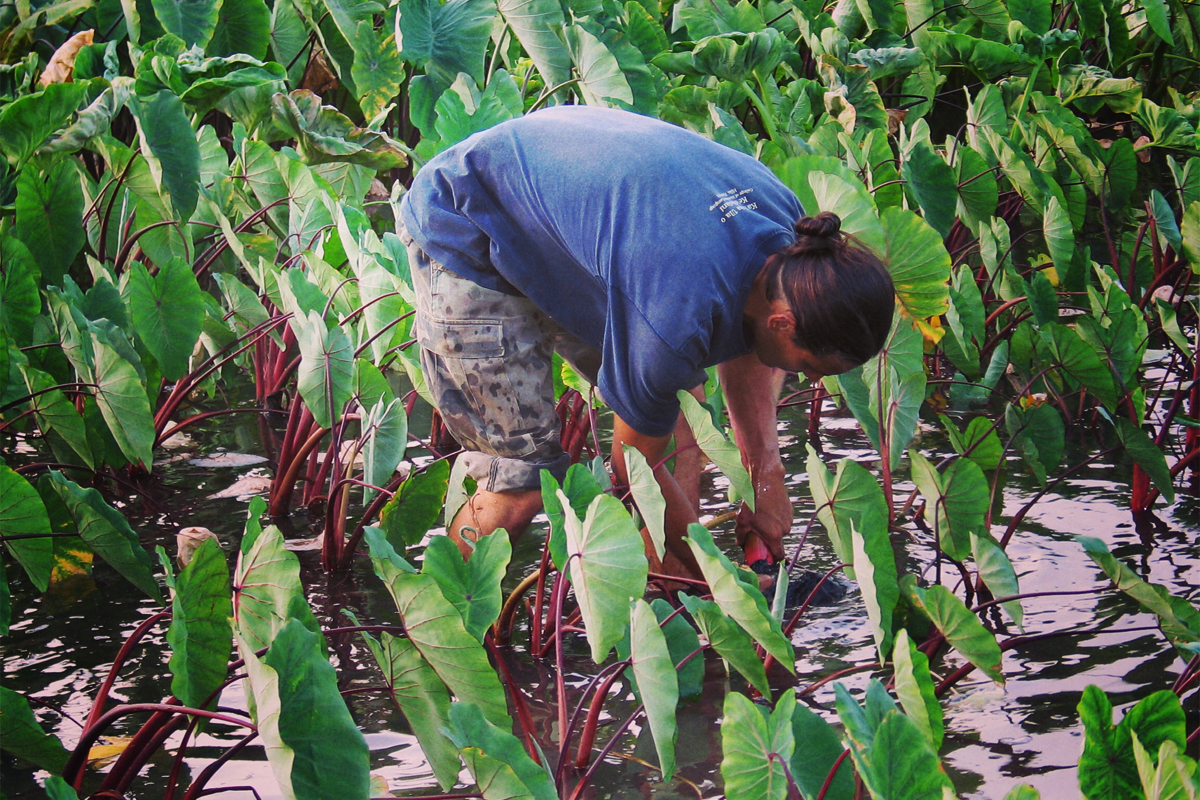 For more than 1,000 years, taro, or “kalo” as Native Hawaiians call it, was a staple crop in Hawai’i.

Since Western contact in 1778, however, taro production has steadily declined in the state. Not only was the population of native Hawaiians decimated by foreign disease, but many of those who survived also lost their land to the sugar plantation owners in the 19th and 20th centuries. Finally, the influx of people from Asia and the United States brought other staple foods such as wheat and rice.

Taro production, at its peak, is estimated to have covered 35,000 acres on the Hawaiian Islands. Current estimates indicate the number has fallen to less than 350 acres statewide—a tiny amount compared to the estimated 16,000 acres of macadamias and 7,000 pounds of coffee grown in Hawaii last year. But if the recent interest in taro farming is any indication, those numbers may soon rise again. Hawaiʻi consumes approximately 6.5 million pounds of taro annually. Local farms supply close to 75 percent, but to meet the demand, the state imports about 2 million pounds of the tubers every year, mostly from Fiji.

Farmers like Hōkūao Pellegrino hope to fill that gap. He has picked up where his ancestors left off and is using his family’s Maui land to grow 45 varieties of organic taro.

Growing up, Pellegrino spent much of his free time playing by a stream famous for taro production, “but not knowing anything about the value of water, not knowing anything about all the plants around me,” he says. As a young man, he discovered that his ancestors had cultivated loʻi kalo (wetland taro ponds) for centuries. The last farmers stopped in the late 1940s, after a large sugar company in the area diverted the stream to irrigate sugar cane fields. With the recent closure of the state’s last sugar plantation, water rights may more easily flow back to taro farmers in the state.

While pursuing a graduate degree at the University of Hawaiʻi at Hilo, Pellegrino, his father, and his mentor, Kanaʻe Keawe, a professor of ethnobotany and master craftsman, began to clear and restore his family’s taro pond. 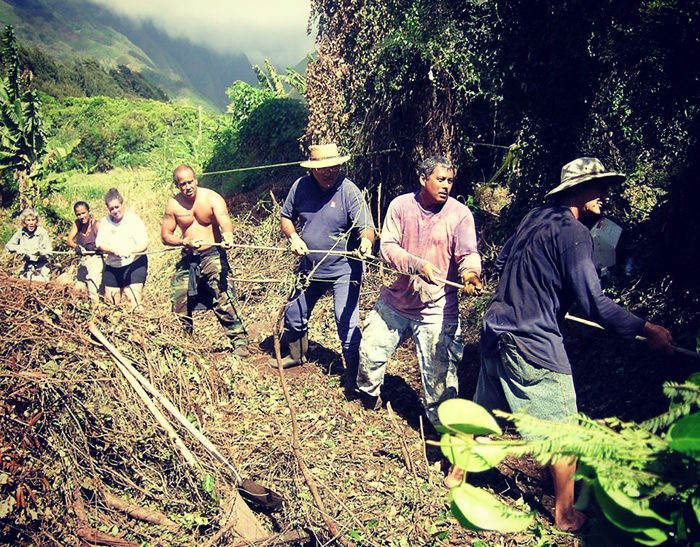 In 2004, after being chosen by ‘Onipaʻa Nā Hui Kalo, a state-wide organization of kalo farmers, for their annual restoration project, Nohoʻana Farm was re-born. Pellegrino recalls, “We had 125 people come and help open our very first loʻi. Kalo farmers from the Big Island to Kauaʻi and everywhere in between; family members, cousins, neighbors—it was huge.”

Taro is known to be highly nutritious; the tuber is a good source of potassium, carbohydrate, and fiber, and also contains calcium and iron. Its granules, when broken down, are said to be one-tenth the size of a potato granule, making it especially easy to digest. The leaves, when cooked, are also an excellent source of vitamins and minerals. Studies also show evidence that poi, a traditional fermented food made with taro, is a probiotic that contains significantly more gut-friendly bacteria than yogurt.

All these beneficial properties make taro an important candidate for fixing the Hawaiian diet. Although it has shown improvement since the 1950s, the life expectancy for Native Hawaiians is still six years lower than the state’s average—a direct result of the higher rate of cardiometabolic disorders (obesity, diabetes, and cardiovascular disease). Native Hawaiians also experience an elevated risk of stroke and cancer.

The decline of Native Hawaiians’ health and taro production is inextricably linked, certainly for the worse and, with a renewed focus, hopefully for the better. In the late 1980s, Dr. Terry Shintani and nutritionist Claire Hughes conducted a study that simulated Hawaiians’ pre-Western contact diet. Participants ate as much taro, poi, breadfruit, sweet potatoes, and fruit as they wanted, along with small amounts of chicken and fish. After 21 days, participants had lost an average of 17 pounds and had lower levels of cholesterol, blood pressure, and blood sugar.

After that study, Shintani wrote The Hawaii Diet, a book that developed as a result of his previous study. Shintani continues to work toward improving Hawaiians’ health by leading community programs and health workshops through his non-profit group, Hawaii Health Foundation.

Taro is also an obvious ingredient for repairing Hawaiian’s fractured relationship with food because it is an important symbol of Hawaiian mythology. A creation myth talks about the union between the sky and earth gods. Their first child was stillborn, and from its grave grew the original kalo plant. According to the narrative, the gods’ second child, Hāloa, was the first human to inhabit the islands and is the genesis of the Hawaiian people. Hāloa cares for his older brother, Kalo, and in return receives the gift of sustenance.

In some parts of Hawaii, taro ponds are still sitting empty. In Waiheʻe, in Northeast Maui, for instance, Pellegrino says many of the ponds are still intact. “If everyone who had loʻi kalo on their land decided to start farming, Waiheʻe would once again become a highly productive area,” he said. A number of the island’s valleys, he adds, still have the ponds. “It looks like Hawaiians just picked up and left yesterday,” he added. 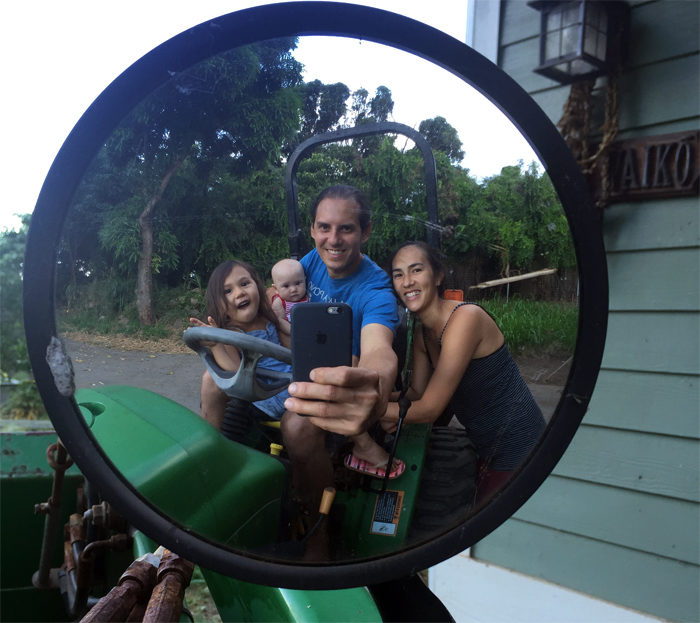 Pellegrino and his family.

For Pellegrino and his family, taro farming is a way for them to eat healthy food while practicing their culture and creating a resource for their community. In addition to farming, Pellegrino works a full-time job off the farm.

“One hundred percent of what we make from the farm gets put right back into operations,” he said. “We’ve been blessed that in the past few years we’ve been able to cover our costs.” One way Pellegrino has been able to do that is to sell value-added products, like paʻiʻai (taro paste), poi, and kulolo (taro and coconut dessert) rather than selling his raw taro, which would not bring in enough revenue.

Another obstacle to growing taro on Maui is the water supply, which was diverted from four major streams in the 19th century to irrigate 36,000 acres of sugar cane fields. Pellegrino is the vice president of a community group that advocates for restoring water rights from private companies, like the recently closed Hawaiian Commercial & Sugar Co., into a public trust resource.

Since restoring that first pond, Pellegrino and his family have restored six of the 12 ponds on their farm. They sell their organic kalo products—and other traditional Hawaiian crops—to the community at the lowest price possible. “I want people to eat healthy food at reasonable prices,” he said. “Poi should be available to everybody, and at a cost that they can afford.” 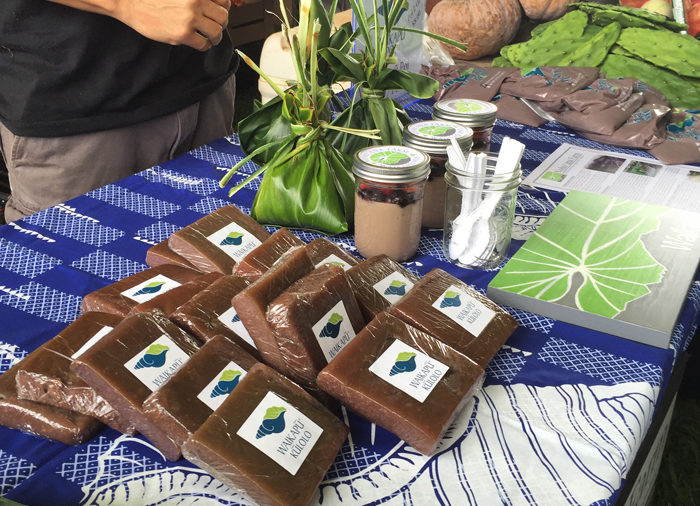 Pellegrino also hopes his taro farm can serve as a cultural educational tool for the next generation. He works with local schools to offer programs and demonstrations for thousands of students who visit Nohoʻana Farm and learn how to use ancient agricultural practices to navigate modern food needs.

Although kalo cultivation throughout the islands is expanding and Native Hawaiians’ health overall has been improving, Pellegrino knows that taro farming is only one step towards solving the problems caused by centuries of colonialism and institutional oppression.

“Fixing our food system isn’t going to be the magic bullet,” Pellegrino said. “If we want a thriving community, we have to approach it from all angles.” But he’s starting with repairing food production—and with taro. “We want to be good neighbors, good to our land, and good to our people.”

It’s hard to think of a better future than that.