Seed Saving as an Act of Resilience

In the face of climate change, a Montana seed library seeks to preserve our food heritage. 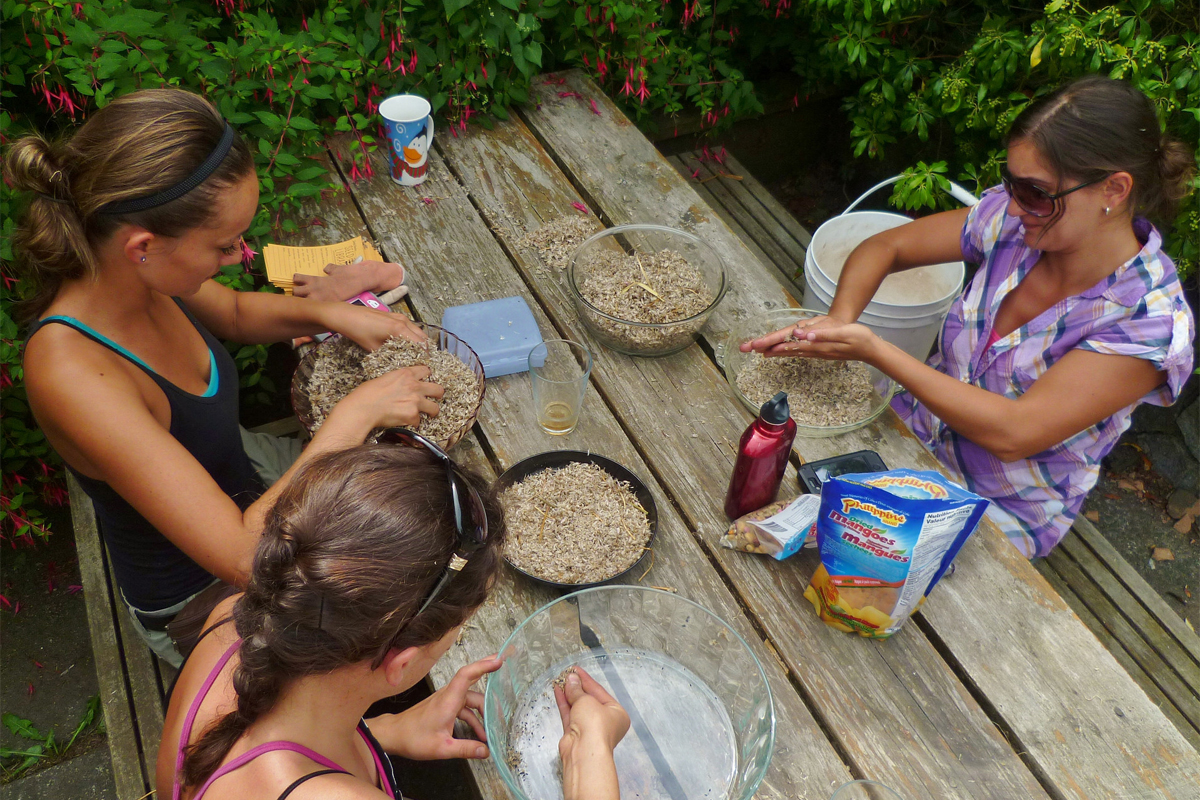 On February 26, 2008, a $9-million underground seed vault began operating deep in the permafrost on the Norwegian island of Spitsbergen, just 810 miles from the North Pole. This high-tech Noah’s Ark for the world’s food varieties was intended to assure that, even in a worst-case scenario, our irreplaceable heritage of food seeds would remain safely frozen.

Less than 10 years after it opened, the facility flooded. The seeds are safe; the water only entered a passageway. Still, as vast areas of permafrost melt, the breach raises serious questions about the security of the seeds, and whether a centralized seed bank is really the best way to safeguard the world’s food supply.

Meanwhile, a much older approach to saving the world’s heritage of food varieties is making a comeback.

On a recent Saturday afternoon, a group of volunteers in the northern Montana city of Great Falls met in the local library to package seeds for their newly formed seed exchange, and to share their passion for gardening and food security.

“We don’t know what’s going to happen to our climate in the future,” said Alice Kestler, a library specialist. “Hopefully, as the years go by, we can develop local cultivars that are really suited to the local climate here.”

For millennia, people the world over have selected the best edible plants, saved the seeds, and planted and shared them in sophisticated, locally adapted breeding projects that created the vast array of foods we rely on today. This dance of human intelligence, plant life, pollinators, and animals is key to how human communities became prosperous and took root across the planet.

The Great Falls Library Seed Exchange is continuing that tradition even while a modern agribusiness model works to reduce the genetic diversity of our food stocks and consolidate control over the world’s seeds. Six seed companies now control three quarters of the seed market. In the years between 1903 and 1983, the world lost 93 percent of its food seed varieties, according to a study by the Rural Advancement Foundation International.

Perhaps we shouldn’t be surprised that giant agribusiness companies have no interest in the vast varieties and diverse ways people breed plants. It is hard to get rich off of an approach based on the distributed genius of people everywhere. Such a model doesn’t scale or centralize well. It is intensely democratic. Many people contribute to a common pool of knowledge and genetic diversity. Many people share the benefits.

Making big profits requires scarcity, exclusive knowledge, and the power to deny others the benefits. In this case, that means the appropriation of the knowledge built up over generations, coupled with the legal framework to patent seed varieties and punish those who fail to comply.

Especially in a time of climate change, though, genetic diversity is what we need to assure food security and resilience.

The Great Falls Library Seed Exchange is on the second floor of the library, which sits less than a mile from the Missouri River. Climb the brick building’s big, central staircase, and you can’t miss the brightly painted seed catalog. Borrowers are encouraged, but not required, to save some of the seeds and return them to the library for others to plant.

The exchange began just over a year ago, and is one of 500-some seed libraries worldwide. It sources its seeds from local organic farms and distant companies that specialize in plants that can grow in the rugged terrain of the northern plains, as well as heirloom varieties that have proven their worth over generations of seed saving. Locals also bring in their favorite varieties to share.

Each grower chooses which of each variety to save for seed, and those choices shape future availability.

“Since we have such a short growing climate here, getting seeds from plants that fruit early is really advantageous,” Kestler said. Some growers, though, select for the biggest fruit; others for the best-tasting. This built-in diversity helps to secure a resilient food supply.

“The seed in its essence is all of the past evolution of the Earth, the evolution of human history, and the potential for future evolution,” author and seed saver Vandana Shiva told me when I interviewed her in 2013. “The seed is the embodiment of culture because culture shaped the seed with careful selection. That is a convergence of human intelligence and nature’s intelligence.”

The Norwegian doomsday vault makes an important statement about the irreplaceable value of the genetic diversity of our planet, and it may prove to be an important failsafe in the event of disaster. But the time-honored process of saving and sharing seeds is dynamic. It naturally adapts to changing conditions, like climate change, and keeps the power with people everywhere to make choices that assure local resilience.

“Seed saving is such an important political act in this time,” Shiva said. “Save the seeds, have a community garden, create an exchange, do everything that it takes to protect and rejuvenate the seed.”