What Happens When Organic Farms are Forced to Spray Conventional Pesticides? | Civil Eats

What Happens When Organic Farms are Forced to Spray Conventional Pesticides?

One Oregon farm’s viral plea shines a national spotlight on what is usually a local debate about mandatory pesticide applications. 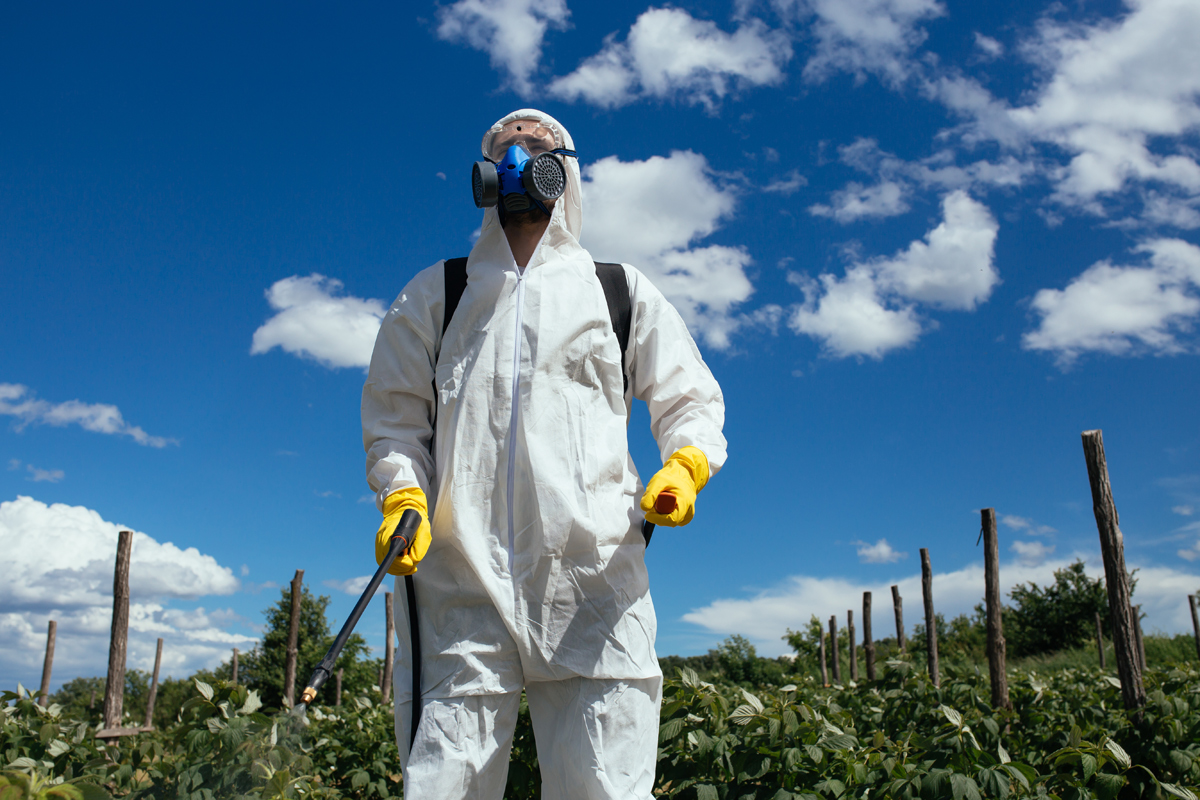 The plea for help from Azure Standard, a large organic farm in Central Oregon, was bound to go viral.

In mid-May, the company posted a video and call to action on Facebook labeled, “An Organic Farm Under Threat,” stating that the local government was about to spray Roundup and other toxic herbicides across more than 2,000 acres of certified organic wheat, peas, and barley.

Within days, officials in rural Sherman County—where less than 2,000 people live—had received more than 57,000 emails urging them not to spray the farm. The most comments they’d received on an ordinance in the past was five.

The underlying situation was more nuanced than a local government out to destroy an organic farm, however. (And many of the facts relayed in the social media campaign have been disputed by county officials. For instance, they never proposed using Roundup, but it makes for a splashier headline than Milestone, a lesser known herbicide.) But the incident shocked consumers and activists because of its implication: After years of cultivating healthy organic soil, could the government really mandate the use of chemical pesticides in the name of weed control?

In fact, conversations with dozens of organic activists and farmers across the country have made it clear that situations like this, while not common, do arise—usually regarding pest, rather than weed, management. And in some cases, farmers may be forced to spray pesticides on their own or the government may do it for them, using the legal authority granted by local pest and weed control ordinances.

If the mandate is part of an emergency protocol (for example, to eradicate a serious pest threatening a region), the farmers are then barred from selling that year’s crops as certified organic, but the National Organic Program does not revoke their overall certification. In Azure’s case, since the weed control issue was presented as a result of shortcomings in the farm’s practices, the farm would have had to start the certification transition process from the beginning and wait three years for their land to be eligible for organic certification again.

All of these scenarios involve contentious debates that pit community or public-health concerns against a farmer’s right to keep farmland organic, but because the debates are generally very localized, they tend to happen in the fields and in small-town city halls, offline, and without fanfare.

What Happened in Sherman County?

There are laws that regulate the control of “noxious weeds”—invasive plants that threaten agriculture, the environment, and/or animals and humans—at the federal, state, and county levels.

Azure Farm’s issues with its neighbors and Sherman County over weeds started long before they received the May notice. The 2,000-acre farm is situated in the midst of nearly 400,000 acres of wheat, most of which is conventionally farmed. Neighboring conventional farmers claimed weeds from Azure’s property—rush skeleton, Canada thistle, morning glory, and white top—were creeping onto their land, causing them to spend extra time and money (on additional pesticide applications) eradicating them.

Sherman County’s Noxious Weed Ordinance gives the county authority to enforce the control of weeds to protect local natural resources and agriculture, and weed district supervisor Rod Asher sent multiple letters, dated back as far as 2006, to the farm notifying them of the violations.

David Cross, Azure’s marketing director, says, “Over the last 10 years, we’ve had a few contacts with the weed board where they asked us to clean up a few things.”

Once they were told the farm might be sprayed in late May, Azure decided to go public with the problem. “Sure, there are a few weeds and we could perhaps do a better job at managing them, but these chemicals are very pernicious and toxic substances, and we absolutely reject their use,” Cross said. “We thought we’d get a handful of letters from our customers, and it would help sway the county. We didn’t know how viral this thing would go.”

After the flood of attention, Sherman County held a public meeting to hear further comment and then agreed to work with Azure on developing a plan that avoids the use of non-organic herbicides and relies on methods such as mowing, citrus pulp mulch, and Boron.

Some farmers haven’t had as much luck resolving similar issues before being sprayed. Although there are few examples involving weed-management practices, there have been various situations in which organic farmers are forced to spray their land to control for pests considered a threat to public health or local eco- and agricultural systems.

In California, a few cases have been documented. “CDFA [the California Department of Food and Agriculture] did require organic growers to use non-organically-approved pesticides during the light brown apple moth treatment program in 2007 and 2008,” said Nan Wishner, of the California Environmental Health Initiative (CEHI). The moth is originally from Australia and can destroy fruit such as apples, pears, and oranges.

In fact, CEHI (originally called Stop the Spray) was formed in 2008 in response to widespread pesticide applications related to the moth.

More recently, several organic farmers in Ojai, located just east of Santa Barbara, were forced to use non-organic pesticides in response to the spread of the Asian citrus psyllid. The psyllid is an insect that spreads Huanglongbing, or “citrus greening,” disease, which can decimate citrus orchards.

Now, CEHI and other groups in the state are concerned instances like this may soon occur more frequently, because of the recent establishment of the Statewide Plant Pest Prevention and Management Program. In the past, state and local agencies were required to file an Environmental Impact Report (EIR) each time a new pest-management program was being implemented, in order to satisfy the requirements of the California Environmental Quality Act (CEQA). Then, in 2015, the government established a statewide pest-management program, essentially giving the CDFA license to avoid getting approval for each new program to spray for pests.

In 2015, CEHI sued the CFDA along with 10 other groups—including the Center for Biological Diversity, the Center for Food Safety, and Environmental Working Group—over the program, and the lawsuit is still ongoing.

“California approved the program despite tens of thousands of public comment letters calling for a less-toxic approach that would protect the vitality and resilience of the state’s food system and the economic interests of organic farmers,” the groups wrote in a press release.

“Part of our concern is that it’s this blank [check] … to spray anything, anywhere, anytime,” Wishner said. “We talked to a lot of organic farmers who didn’t know this was happening.”

Whether the issue is controlling weeds or pests, many of the farmers and advocates Civil Eats spoke with pointed to the fact that government officials often don’t give adequate consideration to organic methods of weed and pest control, which they say can be just as effective as pesticides.

“It seems that although [government officials] have the right intention for disease prevention, their approach is single-minded and more damaging than helpful,” said Reynolds Fleming, an organic farmer in Ojai, who has been working with the state’s agency on insect reports related to the psyllid.

People in power may also simply lack understanding of organic methods, said Steve Gilman, an organic farmer for 30 years who’s now the policy coordinator for the Northeast Organic Farming Association (NOFA). “Of course organic farmers have to control weeds too, or they’re going to be out of business very shortly,” Gilman said. “Organic controls are much different. Sometimes just keeping weeds from going to seed is an adequate control.”

In fact, Sherman County weed supervisor Rod Asher specifically spoke to this point at the public meeting on Azure’s case. “Rod explained most of his experience with weed control is with using herbicides. His experience with organic farming practices is limited,” the court notes state.

However, experts at California Certified Organic Farmers (CCOF) said that, in their experience, agencies are usually willing to work with farmers to consider controls that use organically approved materials or other alternatives.

“It is critical that agencies communicate options and alternatives to organic farmers as well as provide them notice of any planned treatment,” a spokesperson said in a statement. “Additionally, we encourage greater coordination among local, state, and federal agencies.”

Finally, Gilman says in his experience, community relations are key. While Azure may have won a reprieve from spraying, they’ve made more local enemies by going public with their struggle. The county court notes are filled with farmers expressing their dismay.

“Fundamentally, it’s not about weeds; it’s about a worldview,” David Cross said. In the end, however, the work of implementing that worldview, among the many others that exist, happens in the weeds.