Is the U.S. Pine Nut Industry on the Brink of Extinction? | Civil Eats

Is the U.S. Pine Nut Industry on the Brink of Extinction?

Once a major U.S. agricultural product, piñon are facing challenges due to environmental factors and cheaper imports. 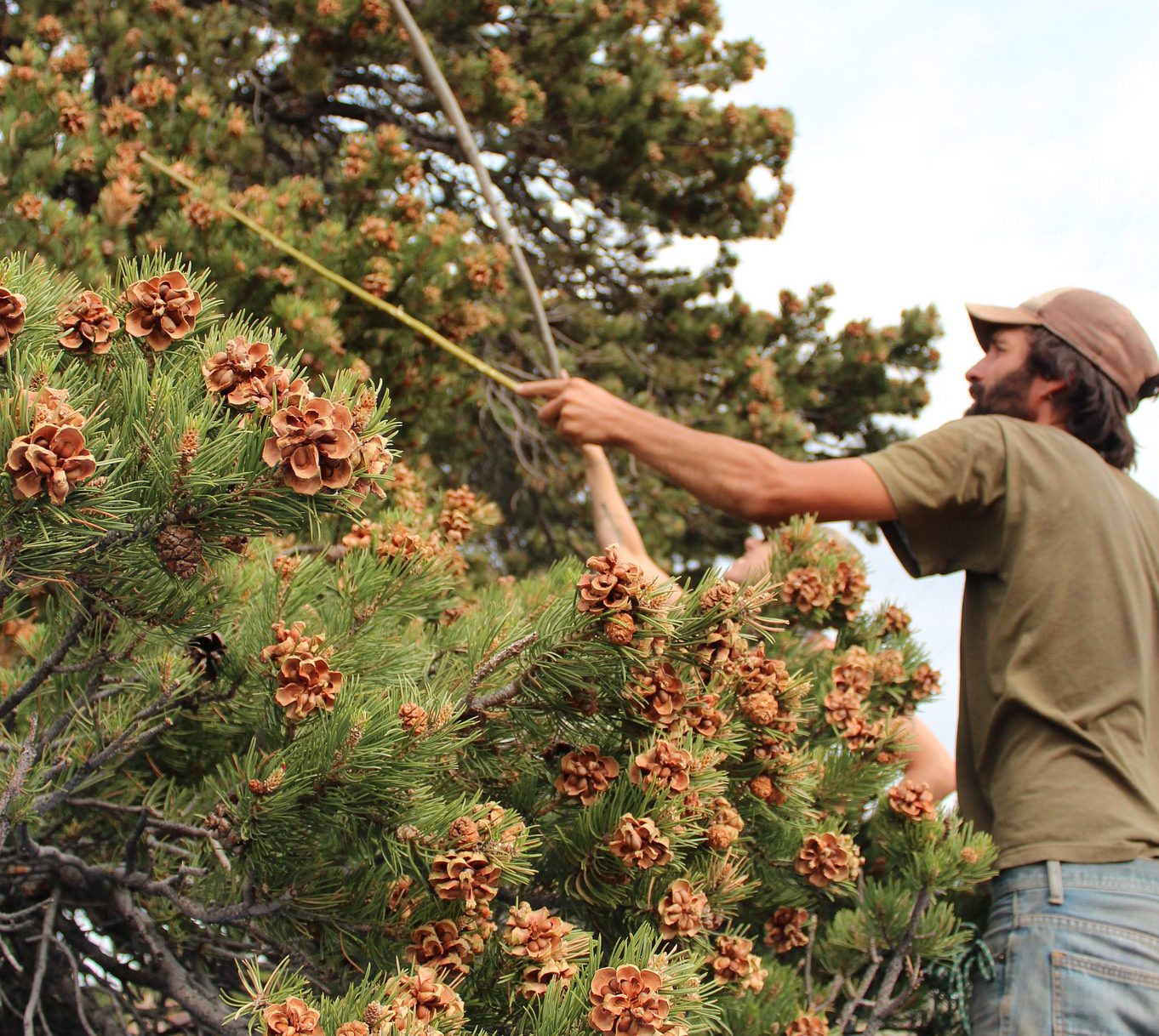 A century ago, the pine nut was a major agricultural product of the American Southwest. By the 1920s, native nuts were being shipped to the nation’s big cities by the ton. By the 1930s, they were listed on the Chicago Commodities Exchange.

Today, American pine nuts (also called piñon or pinyon) are rarely found growing outside the Southwest. And even there, they can be a challenge to locate.

It’s not that the taste for pine nuts has disappeared—pine nut consumption has, in fact, almost doubled in the last decade. Nor is it a problem of falling market values: American pine nuts sell for up to $40 per pound. The dissolution of the domestic pine nut market is both the by-product of human-driven ecological changes to piñon-juniper woodlands and competition with imported pine nuts (from countries like China, North Korea, and Afghanistan) that, due to lower labor and processing costs, now dominate the global market at closer to $25 a pound. With a nut that can take up to 75 years to mature, the likelihood that American pine nuts will recover their commercial value is low.

Piñon vs. Mining and Ranching

For thousands of years, American pine nuts have been an essential food source in the Four Corners region of the Southwest. Pueblo peoples and their descendants (Navajo, Tewa, Zuni, and Apache, among others) found the piñon tree so valuable as to be assigned mythical status.

Native Americans were the first to commodify the food in the early 20th century. In 1942, researchers recorded an 8 million-pound pine nut harvest from New Mexico, Colorado, and Arizona. By 1988, the same region annually yielded less than a quarter of that amount.

Piñon belong to two pine tree species, Pinus edulis and Pinus monophylla, and are located primarily on public lands set aside by the federal government for various uses including livestock grazing; oil and mineral extraction; and recreation. This multi-use philosophy, says Penny Frazier, a sustainable forestry advocate and purveyor of American pine nut products, is at the root of the trees’ decline.

The institutions that regulate public lands—the U.S. Forestry Service and the Bureau of Land Management (BLM)—explained Frazier, have historically seen little value in American pine nuts. In the 1950s, the two institutions divvied up the Southwest according to areas they called “forest” and “range.” Because piñon-juniper woodlands were useless as timber, the U.S. Forest Service and BLM cleared “many thousands of acres” between the 1950s and 1970s.

Frazier sees a deep irony in the destruction of piñon-juniper woodland to make way for the cattle industry. She points to research that says a healthy piñon forest can generate $4,000 to $10,000 per acre, when one acre of forest produces 250 pounds of nuts. Compare this to rangeland, which generates approximately $168 to $288 per acre, but also requires extensive tax subsidies to sustain the vast range holdings throughout the country, with $51 million estimated for the BLM alone.

According to the U.S. Forest Service, some of the taxpayer funds devoted to range management under their agency go toward “controlling” the spread of piñon-juniper woodlands into land designated for grazing. Nevertheless, ranching is an important aspect of Southwestern identity. But Frazier believes that’s not the only reason ranchland is common. “It’s much easier to find oil and gas and gold where there is no forest,” she said. 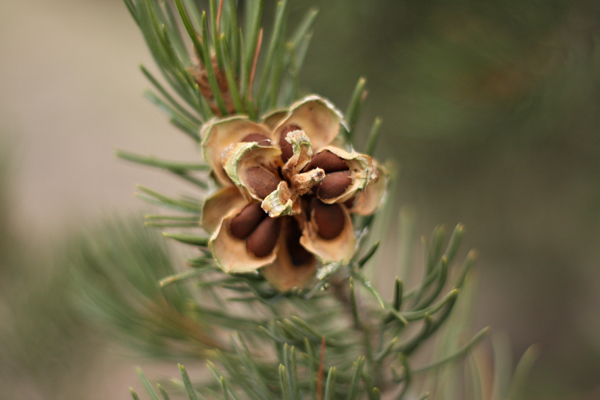 Thomas Kolb, a professor in the School of Forestry at Northern Arizona University, says the practice of removing piñon to make way for other industries has largely stopped, however. Colorado BLM Public Affairs Specialist Deanna Masterson agrees. “We’ve been pretty stable in the number of permits and allotments. We haven’t removed piñon-juniper to create rangeland,” she said.

Although millions of acres of piñon-juniper woodlands remain, Kolb points to climate change as a threat to the American pine nut market. “Piñon woodlands are highly vulnerable to hot weather and droughts,” he said.

Dyer M. LeBaron’s family has harvested, processed, and sold American pine nuts since the 1950s. These days, LeBaron sells primarily online as Wholesale Pine Nuts. But it’s more than just the marketplace that has changed, he said. Over the last 15 years simply collecting the nuts has become more difficult.

“You get very unpredictable weather patterns that we didn’t experience going back 30 to 40 years. Before … pretty much every year we could scout them out and find some very good harvest. Now it’s very sporadic,” said LeBaron.

In recent years, LeBaron says he and other harvesters have also been rejected for commercial gathering permits at previously productive pine nut locations in Nevada and Utah.

Pine nuts require intensive labor for harvesting and processing. Under the best conditions, says LeBaron, in an eight-hour day a single harvester with the right tools can collect 50 pounds of nuts protected by cones covered with a sweet, sticky pitch. LeBaron’s operation typically employs 12 to 30 workers during the short two-month harvest season in late summer. Much of the work is in processing the piñon. Once harvested, cones must be dried and heated in order to open enough to provide access to their nuts. One by one, the nuts are extracted from the cone, then removed from their hard casings.

Labor costs combined with decreasing harvests have made American pine nuts less competitive in a global marketplace currently dominated by China, which exported 76 percent of the world’s pine nuts in 2015. Though Chinese pine nuts are also gathered on public lands, the cost of labor is a fraction of the in the U.S. Frazier says that in some places, particularly in North Korea, which produces 12 percent of the global pine nut market, labor costs are virtually nonexistent because pine nut harvesting and processing is done by soldiers, not private citizens earning a daily wage.

At this stage of global agricultural trade and ecological degradation, there is little to slow the disappearance of American pine nuts from the market. It is likely, in fact, that the productivity of piñon-juniper woodlands will continue to decrease as the frequency of unusually warm periods coupled with drought continue to increase, says Kolb.

“When we have these episodes of piñon pine mortality, we see a shift towards junipers. A lot of areas have been converted from piñon-juniper woodlands to just juniper.”

And as mature piñon continues to disappear, so too will the American pine nut industry.

“An average of 30 years ago there was probably 20 to 30 commercial harvesters,” said LeBaron. “Now there’s just a handful. It’s a dying thing.”

Image at top by Scott Smuin.