In the Fields with Ben Burkett | Civil Eats

In the Fields with Ben Burkett

The fourth-generation farmer and legendary farm advocate shares lessons learned from his decades on the farm, the changes facing small farmers, and why to continue pushing for change. 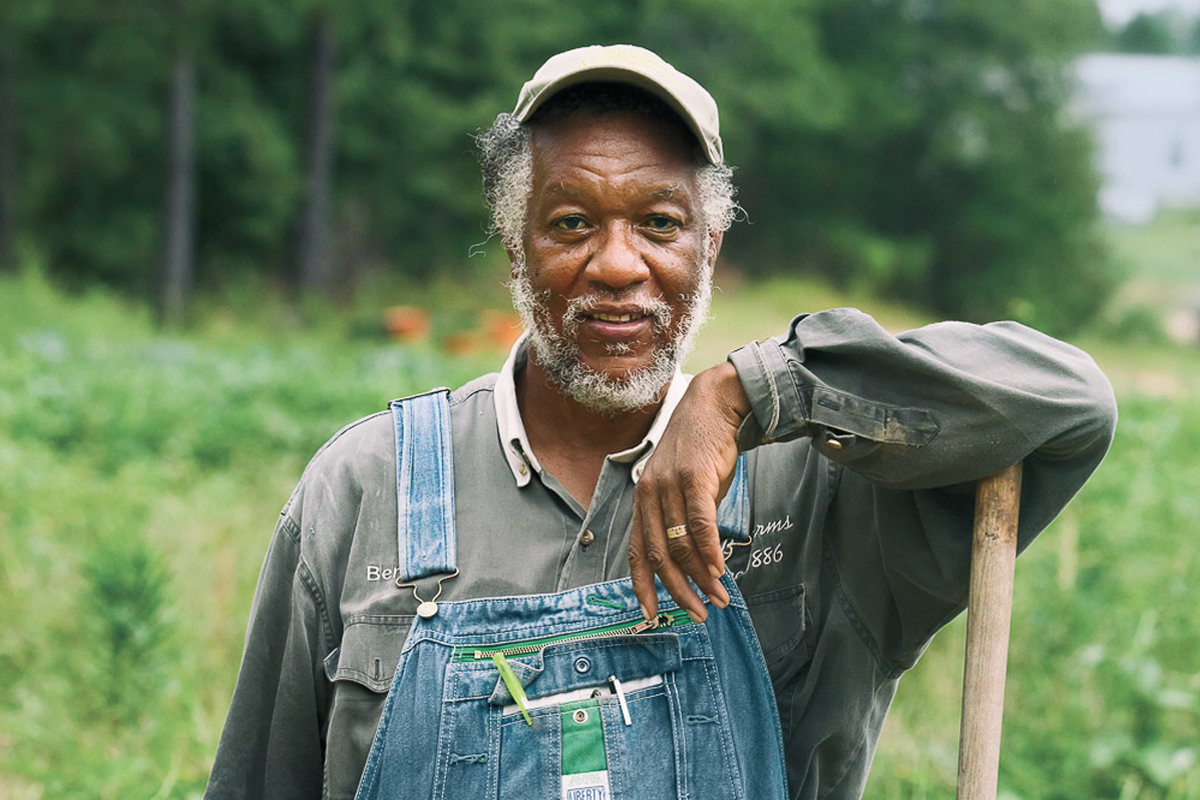 Ben Burkett’s family has been farming on the same land in Petal, Mississippi, since 1889, when his maternal grandfather acquired a 164-acre homestead. Today, it’s known as B & B Farm, after Burkett’s parents, Ben and Bessie. His daughter Darnella Burkett Winston, who lives a hundred miles away in Union Church but still farms with him regularly, is the fifth generation to work the family land. At just under two years old, Darnella’s daughter is already riding horses, so she may be on her way to becoming the sixth.

Not only does Burkett grow exceptional sweet potatoes and watermelon, he’s been an activist for more than 30 years, speaking, writing, testifying, and organizing for the rights of independent family farmers in his community, around the U.S. and internationally. He is President of the National Family Farm Coalition; State Coordinator of the Mississippi Association of Cooperatives, the local arm of the Federation of Southern Cooperatives; and a member of the international peasant network La Via Campesina. He is the recipient of a 2014 James Beard Foundation Leadership Award, among other accolades.

But this is planting time, so Burkett is home on the farm. He took a break to talk with us about spring at B & B Farm and how hard it’s gotten to get tractor parts.

What do you grow?

I grow about 20 different vegetables, soybeans, and I have close to 100 acres of old growth pine trees for lumber and telephone poles.

What kind of community are you farming in?

Petal is a small town; the farm is about 10 miles outside. Not as far from the city limits as it used to be. It’s a mixed community—Black and white and a few Hispanic residents.

Where do you sell your products?

We’ve got a local cooperative, Indian Springs Farmers Association. We were incorporated in 1981, and we’re at 35 members now. We sell to food service companies; supermarkets; Whole Foods; and restaurants, a coop store, and a buying club in New Orleans. We shipped last year to a buying club in New York, and we hope this year to ship to Seward Coop in Minneapolis—they’ve committed to buying a few 18-wheeler loads of watermelon, starting the last weekend in June.

What are you doing on the farm this week?

I’m transplanting watermelons and cantaloupes and getting ready to start planting soybeans next week. I’m harvesting kale, collards, and Vidalia sweet onions. And I’ve been picking sugar snap peas for four or five weeks. They’re going to the coop store in New Orleans, and getting us a pretty good price, $2.50 a pound.

What ‘s hard about farming?

The consolidation of everything. Markets are being consolidated—there’s fewer and fewer buyers—and then on the other hand, the supply is being consolidated. In our area, there used to be a lot of local suppliers—you could get lime, fertilizer, fuel oil—now, for instance, there’s nowhere around us where we can buy farm lime, so the coop decided we’d buy our own lime spreading equipment and lime. We’re practically going to become the distributor ourselves! All because we can’t get it local.

The rules and regulations they’re putting on us small farmers are also tough. All the certificates and inspections and tests for the coop and my farm…Our 8,000 square foot packing house has to have a Homeland Security plan! I can see what they’re doing, but I don’t think anyone has gotten sick because of the small farmer, eating somebody’s greens or cantaloupes or watermelons. But they put us to the same rules as the 5,000-acre leafy green farmers in California. I fought it for years, and I’ve come to the conclusion that it’s just what we’ve got to do—that’s the cost of the produce business.

And the biggest problem I see is that we’ve got to get another generation of farmers. All these little towns are drying up. When I was growing up, there were probably 50 or 60 full time farmers, with a couple of hundred acres each. They were making a good living on diversified farms, with livestock, crops, cotton—cotton was what brought the money in. We had a contract with Vlasic for cucumbers, with the Louisiana pepper industry for hot sauce, processing for okra and peas. When they signed NAFTA, all of that left. So when my father’s generation died, there were just a few of us still here, and not many coming up behind us. In my community now, we’ve got maybe eight farmers now, with thousands of acres. They don’t buy nothing local. Those little towns couldn’t do nothing but dry up. When all the young people graduate from college, they get out of Mississippi as quick as they can.

What do you love about farming?

It’s all I ever did. What do I love about it? Well, it’s a good life. I rarely go into a store; I ain’t got nothing to buy at a store except a few clothes. I trade for my milk with other farmers; I got a whole bunch of strawberries the other day; my neighbor kills and smokes meat; one of the other coop members, come hunting and fishing season, he don’t work for nobody, so he keeps us all up with game; and I grow all types of vegetables.

In the morning, I’m going to stop at this little old hamburger joint, they call it The Office, where all the farmers meet up around five in the morning—you got to get there early; by 7, they’ve scattered like blackbirds. White farmers, Black farmers, growing soybeans, watermelon, cows—everyone shows up there. They get into some heated discussions, about Trump, OJ, the KKK; one of them has some old time variety onions and he’s going to let me have a few. And then I’ll go by and see a friend’s watermelon fields, and then I’ll go on to my own.

Besides that, you hope you’re doing some good, supplying good quality produce and products to the public at a fair price. The Federation has a farm to school program, with colleges and high schools, and we’re doing a project working with young people and agroecology with the Farmworker Association of Florida.

I just enjoy farming. I always have. I started farming on my own in 1973, and I’ve been at it ever since.

What do you wish consumers knew about what it takes to grow the food they eat?

How much it takes to get the tomato to the supermarket, or how much energy it takes to get a watermelon to your table. I’d like the consumer to be aware of what the real cost of food is and appreciate the work the farmer does.

I was at a Kellogg Foundation meeting years ago; they said they wanted at least 10 percent of the food consumed in the U.S. to come direct from a farmers’ market. I believe we’re getting there: every little town’s got a farmers’ market; cities have them every day. This whole thing—nothing comes quick. It’s a generational thing. We’ve been up, we’ve been down, we’ve made some steps, but we can’t give up.

This article originally appeared on the GRACE blog, and is reprinted with permission.