How the L.A. Unified School District Shut Down a McDonald’s Fundraiser | Civil Eats

How the L.A. Unified School District Shut Down a McDonald’s Fundraiser

Is a resolution to end McTeacher’s Nights in the nation’s second-largest school district a promising sign of things to come? 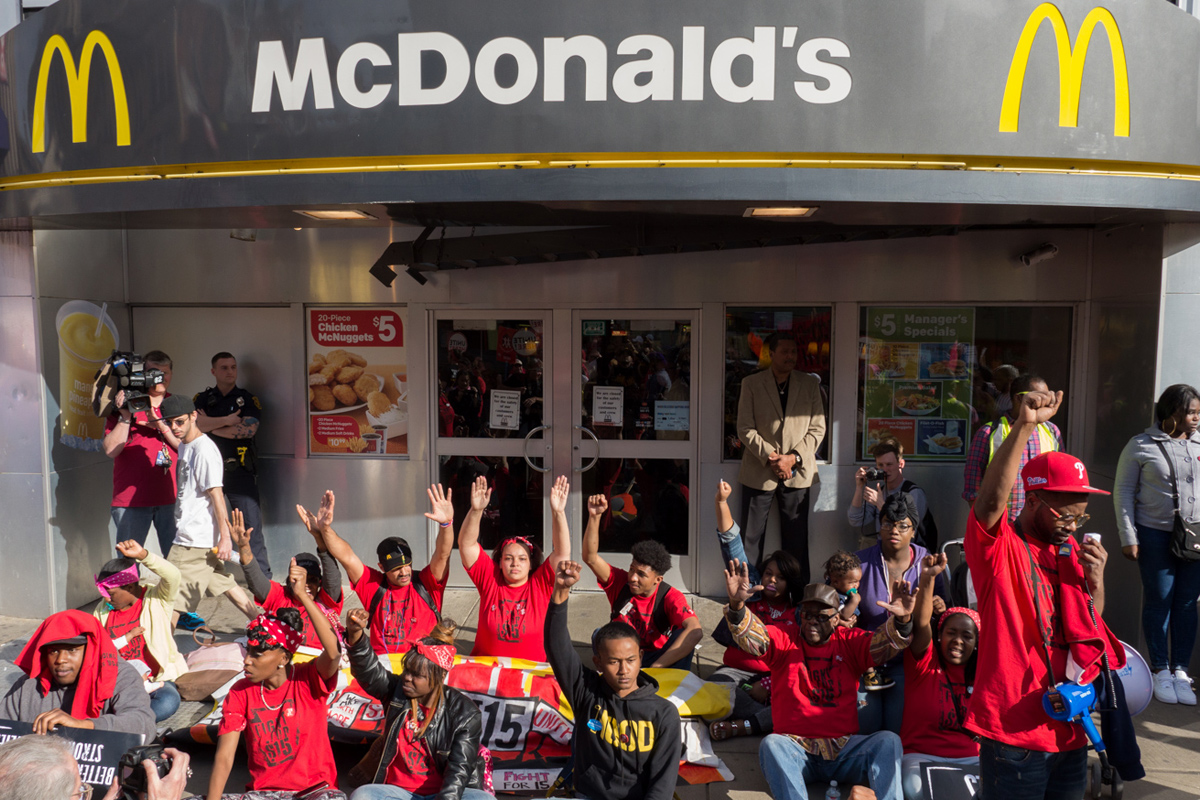 Late last month, the Los Angeles Unified School District (LAUSD) school board made headlines when it passed a resolution doubling down on guidelines that nix junk food fundraisers—and specifically calling for the elimination of McTeacher’s Nights, a popular school fundraiser that brings teachers behind the counter at local McDonald’s restaurants in exchange for a percentages of the sales.

Despite guidelines in place that prohibit partnerships promoting unhealthy food, at least 120 McTeacher’s Nights have taken place in the Los Angeles area, and more than 600 in 30 states across the U.S. since 2013, according to Corporate Accountability International (CAI), a nonprofit group based in Boston. (Full disclosure: I worked with CAI in 2014 to protest McDonald’s marketing to children.)

The new resolution requires the superintendent to notify McDonald’s itself of the passage and to prove to the board that all schools in the district are adhering to the policy. “McTeacher’s Nights are not in line with the policies of the school district and where we’re going as a nation that cares about its kids,” LAUSD school board president Steve Zimmer, one of the resolution’s sponsors, told Civil Eats.

The fact that junk-food marketing can be problematic even in a school district with explicit guidelines in place and progressive ideas about food—where sugary drinks have long been removed from vending machines, purchasing policies encourage local and sustainable food, and vegan lunch options are on the agenda at school board meetings—demonstrates just how entrenched junk food has become in schools.

Food and beverage companies spent $149 million in 2009 on in-school marketing, according to research published in JAMA Pediatrics. At a time when many districts are cash-strapped, fast food corporations are trading new scoreboards and refurbished gyms for logo placement and offering classroom coupons and profits from label and “pop-tab” collection programs that double as free advertising. Other examples include McDonald’s bringing Ronald McDonald into schools under the guise of talking about bullying or encouraging reading, or Pizza Hut’s 30-year-long program offering a reading incentive program to schools that rewards kids with coupons for free pizza.

“Corporations want to get into schools, put their logo and brand in front of kids, and make them customers for life,” said David Monahan, a campaign manager at Campaign for a Commercial-Free Childhood (CCFC). “They’re preying on schools in tight times.”

But with the second-largest school district in the country drawing a line in the sand, could the tide finally be turning? “This is a testament to the fact that public opinion has shifted away from McDonald’s and predatory marketing to children,” said Sriram Madhusoodanan, a spokesperson for CAI. “The resolution sends a broader message to fast food corporations that teachers and school districts are standing up against these kinds of fundraisers and seeing them for what they really are—high-impact marketing tactics that harm our children. I hope to see more school districts follow and stand up for children’s health.”

Though LAUSD is the first school district to outright ban McTeacher’s Nights, more than 50 teachers unions from across the country signed a letter in 2015, along with CAI and CCFC, asking McDonald’s to end the fundraiser.

“I’m not going to tell parents to use their money to buy this food that’s setting up habits for life,” said Cecily Myart-Cruz, vice president of the United Teachers Los Angeles (UTLA) teachers union. She also drafted a letter to the McDonald’s Operators Association of Southern California on behalf of UTLA demanding an end to the promotion of McTeacher’s Nights. On the state level, Rhode Island and New Hampshire are both considering bills that ban advertising in schools of foods that don’t meet nutritional requirements to be sold on the premises.

Students in schools that participate in the national school lunch program and/or school breakfast program will also have some protection against junk food marketing. All participating schools are required to have a wellness policy in place by the end of June that, in part, allows marketing and advertising only of foods and beverages that meet the Smart Snacks in School nutrition standards (though there is gray area for fundraisers held outside of school and school hours).

The LAUSD resolution does have critics within the school district who say McTeacher’s Nights are important moneymakers—and that the individual schools should be allowed to make their own decisions about fundraising. Yet there’s some evidence that McTeacher’s Nights aren’t exactly a windfall for schools: According to a 2013 report from healthy food advocate Michele Simon, most schools receive just 15-20 percent of the proceeds during a typical 3-4-hour fundraiser, which can add up to as little as $1 per student. McDonald has said they’ve raised more than $2.5 million for schools between 2013 and 2015 through McTeacher’s Nights for the 10 percent of restaurants they own directly.

Getting junk food marketing out of schools for good will take an organized effort, said Madhusoodanan. “When parents, teachers, and students speak up and push back, school districts listen,” he said.

Zimmer, for one, says he’s not backing down when it comes to LAUSD’s health-focused policies. “I’m not going to sugarcoat this,” he said. “This is a fight on a lot of levels, and we are fully engaged in this fight. For those of us who understand the responsibility the district has to the nutritional health of children, it will be a tough debate. But I think we will prevail.”

Sally Kuzemchak is a registered dietitian, a mother, and maintains a blog about feeding families at RealMomNutrition.com. Read more >