The Fisherman Who Wants to Transform SF’s Fisherman’s Wharf

Giuseppe ‘Joe’ Pennisi, a third-generation fisherman based out of the San Francisco Bay, is reconnecting Bay Area eaters with fish from their local waters. 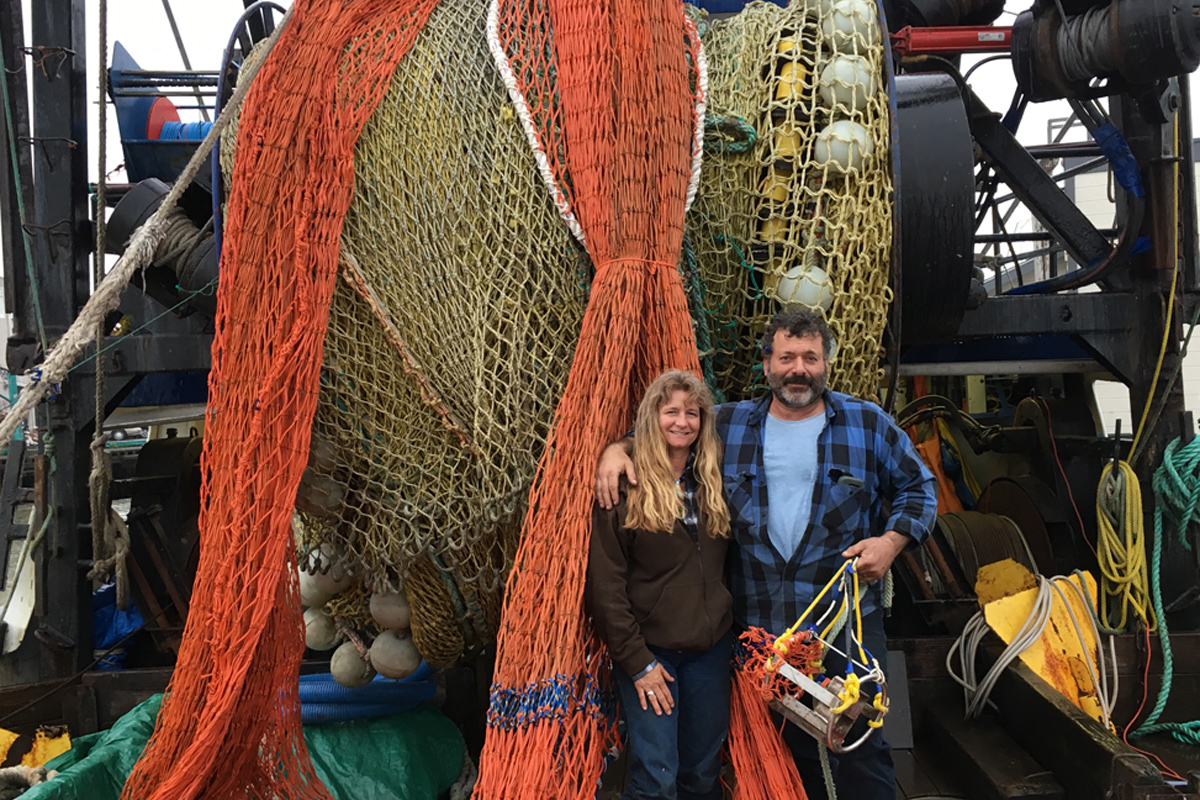 Amidst the clam chowder bowls and t-shirt shops on San Francisco’s Fisherman’s Wharf, Giuseppe “Joe” Pennisi’s weathered trawl boat looks out of place. Stationed on his docked vessel, the third generation, Monterey-born fisherman has been working tirelessly to accomplish one goal—to reconnect this community with local fish.

It’s been years since the fish served at the wharf, or in the larger Bay Area, came exclusively from local waters. And for Pennisi, who catches local groundfish—species like rockfish, sand dabs, and petrale sole—the relationship between the fishermen and the local market is all but broken at a time when most consumers prefer shrimp, salmon, and tuna.

Now, in an effort to empower fishermen and reconnect them with local buyers, Pennisi is working to reach customers directly.

U.S. fishing regulations are currently some of the strictest worldwide and fees, restricted water access, and close in-person monitoring often make it difficult for small-scale fishermen to survive. And the regulations don’t stop once they reach the dock. In federally managed fisheries, fishermen are not legally allowed to sell their own fish without going through a third party, generally a large-scale distributor that must hold a “first receiver” license.

“The buyers hold the purse strings to the whole operation,” explained Ian Cole, co-founder of a community-supported fishery, Ocean2Table in Santa Cruz, who buys fish from Pennisi. “Typically, a boat like Joe’s would offload to a single buyer and that buyer would have the most say in setting the price. And because of that, the fisherman doesn’t end up with a good share of the profit.”

To cut out this regulatory step, Pennisi in mid-March acquired his first receiver license from the National Oceanic and Atmospheric Administration (NOAA), with the aid of the Monterey Bay Fisheries Trust, to sort through months of paperwork. This is very unusual in a federally managed fishery—just two other fishermen in the area, Steve Fitz and Geoff Bettencourt, based in Half Moon Bay, own first receiver licenses.

“Joe’s taking the matter into his own hands, and that’s what he needs to do,” said Sherry Flumerfelt, the Trust’s executive director, who has worked on numerous projects with Pennisi in Monterey in the past. “Even though he’s not landing in Monterey Bay right now, we’re happy to help him get back up and running and fishing. We ultimately just really want fishermen like Joe back on the water.”

Long History of Trouble for Local Fishermen in California Waters

The fracture in the local fishing industry began back in 2000, when the federal government declared the Pacific Groundfish Fishery an “economic disaster” due to stocks collapsing and tightened regulations. Many fishermen went out of business; with no boats on the water, local buyers turned instead to international sources and the aquaculture industry began to grow by leaps and bounds. Today, Americans eat more farmed fish than wild, and the vast majority— over 90 percent—comes from outside the U.S.

In recent years, groundfish stocks have rebounded, but fisherman such as Pennisi have been slower to recover their businesses.

Innovators in the nonprofit sector have been trying to help small-scale fishermen market the sustainability of their current practices, and community-supported fisheries—subscription services that connect these fishermen with individual customers—have been springing up locally, helping to build consumer awareness.

But it has remained difficult for fishermen to break back into the local market and to compete with global prices set by large-scale fishing operations that don’t necessarily abide by regulations as stringent as those in the U.S. There just simply aren’t many buyers that can purchase and process the large amounts of fresh fish that trawl boats like Pennisi’s can bring in.

“If you imagine the fishing industry as a mirror, throw that mirror on the ground and that’s what we have left—fragments,” said Pennisi. “We used to have all these companies to buy process, and distribute fish, but now all the infrastructure has been fragmented into smaller operations or else lost, and there isn’t anywhere for the fish to go.”

In this fishing environment, and with his hands tied by the predicament of fragmented infrastructure, Pennisi started thinking outside of the box.

A Breakthrough: The Floating Fish Market

In the last week in March, just days after Pennisi was given his new license, he went out fishing with his crew. The weather was bad, so the fishermen only dragged their net through the water twice. But Pennisi came home with 33,000 pounds of 22 different species, including rockfish, sole, and skates. Pennisi and his crew then delivered the fish to around 100 wholesale and retail buyers that he had spent weeks lining up. 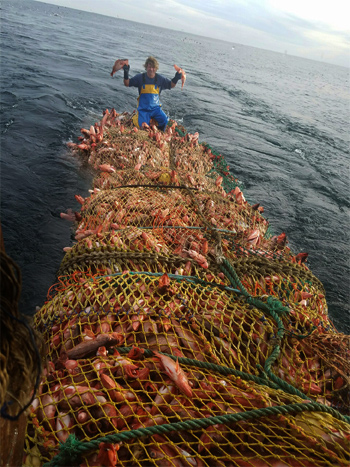 Part of the haul on Pennisi’s first trip out with his first-receivers license.

Cole and his business partner at Ocean2Table Charles Lambert, drove 80 miles from Santa Cruz to Fisherman’s Wharf in San Francisco to collect 600 of pounds of rockfish. He’s optimistic about the endeavor. “Joe was running out of options; you see all these boats leaving the industry because it’s just not profitable anymore. We’re doing everything we can to help him succeed.”

Pennisi’s ultimate vision is to be the first fisherman to sell his fish right off of his boat on a “floating fish market”; he already has self-engineered some scales and other equipment to do so. “Fish is so good and has so many different flavors, but because that flavor drops off after a couple days most people don’t even know that,” he said. “I want them to have that full experience.”

While Pennisi is currently delivering his fish from his boat, the Port of San Francisco has asked him to first get approval from the city before he starts selling directly off his boat (although legally, he could start that now). Rip Malloy, who works for the pory and manages Pier 39 and Fisherman’s wharf, says he’s “all for the idea,” and hopes it will bring more locals to the wharf and bring more activity year-round.

It’s Pennisi’s hope that other fishermen will be encouraged to get first receiver’s licenses and join him to sell directly to buyers and individual customers at the wharf. He and his crew have collected signatures from 75 other fishermen, a handful of local business owners, and members of the public, for a letter to the city stating their interest in selling fish directly of off the fishing boats.

“It doesn’t work if we don’t all do it together,” says Pennisi. “We want there to be all different kinds of boats bringing in fish so we have diversity and consistency. This is a process of rebuilding relationships between fishermen, between fishermen and the restaurants, and customers.”

Innovating to Increase Both Sustainability and Profitability

The fact that Pennisi even has fish to sell is testament to his innovation and stoicism. “I just resist and resist selling the boat,” Pennisi said.

Although he took a brief hiatus from fishing and got his contractor’s license to make ends meet in 2005, he returned to his boat full-time in 2011. That was the year when, like many fisheries in the U.S., the groundfish fishery adopted a “catch share” system, which allows state or federal regulators to set a total allowable catch over a certain time period and then divide it into shares intended for individual fishermen and companies to purchase.

That’s also when the Monterey Bay Fisheries Trust formed to fend off larger commercial businesses by buying up quota and then leasing it to fishermen at more affordable prices. Despite steep federal fees—Pennisi pays more than $500 per day for a federal observer to monitor his boat while he’s on the water, for example—the catch share system did encourage Pennisi and other fishermen to figure out ways to reduce their bycatch so they could bring in a greater amount of marketable fish with each trip. 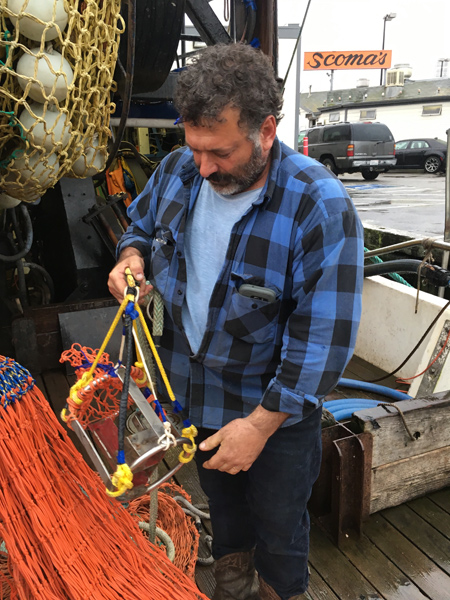 Pennisi with some of the gear he uses for his lighter-touch trawl system.

Pennisi quickly proved himself a skilled engineer and innovator. In 2015, he partnered with the Environmental Defense Fund (EDF) to develop his concept for “light touch” trawl gear that would have a lesser impact to the seafloor, reduce the amount of bycatch and also minimize fuel consumption.

“The magnitude of the difference between the two gears was fairly striking, with respect to the alteration of the habitat attributes,” said California State University Monterey Bay scientist James Lindholm, who has studied the effects of trawling on ecosystems for 15 years and worked with EDF to test the impacts of Pennisi’s designs. “Gear like the gear Joe’s working on is a way forward for us. Our study demonstrates he can catch fish and simultaneously minimize impacts to the bottom—not get rid of the impacts, but at least minimize them.”

Through his work with EDF and his own ongoing adjustments, Pennisi has managed to reduce his bycatch by 99 percent, decrease his fuel consumption by 50 percent, and lighten his boat to avoid ever scraping the ocean floor. And whereas his crew used to spend hours sorting through the too-small fish or unwanted species, the new gear means almost all the fish they catch are marketable, and they can get them on ice extremely quickly.

While many fishermen have had to make modifications in order adjust to the regulations, it’s rare to have the level of resources or encouragement Pennisi has had to experiment. Given how essential these innovations have proved to the survival of his business, he has worked to spread his successes with the rest of the industry—for example, giving a presentation for a gear modification workshop held in Oregon in 2016 by the West Coast Trawlers’ Network.

Once Pennisi gets approval from the city of San Francisco to sell fish directly off of his boat, he hopes to set up his “floating fish market” and cook up sample fish right there for people to taste; he also envisions being joined by his fellow fishermen and hopes that both tourists and San Franciscans alike start to think of the Fisherman’s Wharf as the best place to buy fresh, local fish. (Down the line, he also wants to donate a portion of his catch after each trip to charities such as Children’s Miracle Network.)

So far, he’s pleased that his experiment is resonating with the local community. “People saw those fish I brought in, how beautiful and fresh they were, and that they [flew] right off of the boat,” said Pennisi. “My phone has been ringing off the hook.”