After the state’s new Democratic governor vetoed a bill to limit plaintiff compensation in CAFO nuisance lawsuits, the GOP-controlled legislature overturned the veto in short order. 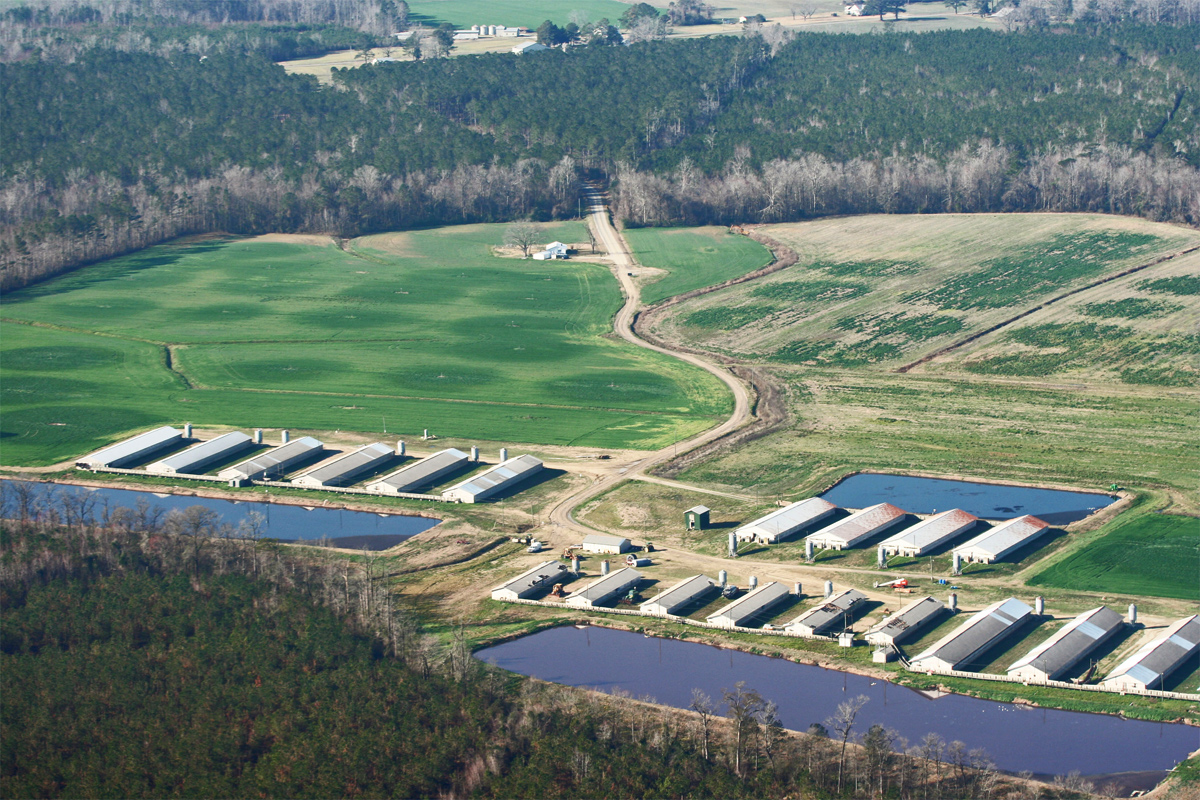 Editor’s note: We have updated the title of this article to reflect the fact that the GOP-controlled state legislature overrode the Democratic governor’s veto on May 10 and May 11, 2017. The original article is below.]

Elsie Herring has been fighting for decades against the industrial hog farm that moved in beside her family’s Eastern North Carolina property in 1986 and began spraying the fecal material of 2,000-plus hogs onto the field that ends eight feet outside her kitchen window. 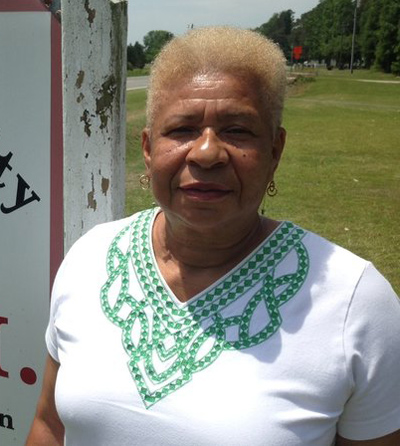 But last Friday, when the state’s newly elected Democratic Governor Roy Cooper vetoed a bill that would protect the hog industry from lawsuits like one she and about 500 others have filed against a subsidiary of Smithfield Foods, she breathed a sigh of relief—at least for the moment.

“This is a really big deal,” Herring said from her home in Duplin County, where hogs outnumber people 40 to one. “It was a bad bill that only protected the industry. I’m very glad the governor is standing up and doing the right thing by the people.”

As the industrial farms that have steadily taken over rural communities since the 1980s have polluted with increased liberty, individuals living near the operations—most often low-income people of color—have increasingly been forced to turn to the legal system to protect themselves from health and environmental risks, often by filing nuisance lawsuits.

In North Carolina, a last-resort option to protect disadvantaged people from factory farm pollution—their ability to litigate—hasn’t been limited. This victory may be short-lived, however: Republicans hold more than enough seats in the state legislature to overturn the veto, which could happen as soon as tomorrow, if party leaders decide to bring the issue to the floor.

North Carolina House Bill 467, known as the “Agriculture and Forestry Nuisance Remedies” bill, sought to limit the compensation plaintiffs can receive in civil suits against agricultural and forestry operations, including commercial hog farms, to a sum related to the diminished value of their property. It would bar them from receiving compensation for damages related to health, quality of life, enjoyment of property, or lost income. 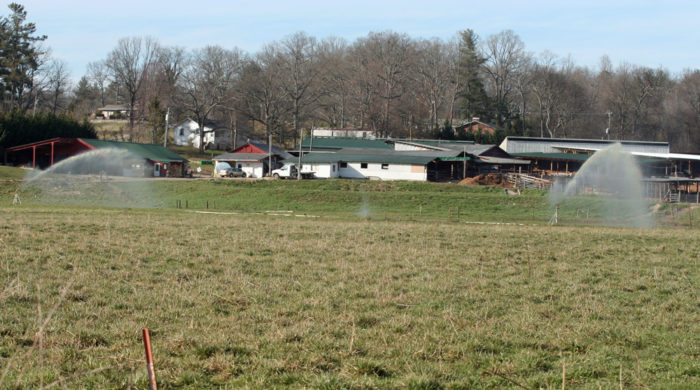 Together, the pigs produce 10 billion gallons of feces and urine each year, which the operations store in large, open-air pits, euphemistically referred to as “lagoons.” To make sure the pits do not overflow, the operations periodically lower their levels by shooting the fecal mixture over “sprayfields” of feed crops with high-pressure sprinklers.

“For them to feel like we should have no recourse in our quest to get justice is an insult on top of the conditions they’re focusing us to live with, with the pigs and their waste,” Herring said following the General Assembly’s passage of the bill, but before the governor’s veto. “We’re not just complaining to be complaining; we’re complaining because our lives, our livelihoods, our property rights, and our health—all of those things—are in jeopardy.”

The North Carolina legislature, in which the Republicans hold a supermajority in both houses (35-15 in the Senate; 74-46 in the House), could override the veto with a 3/5ths majority vote if they take up the issue again. The House would need 72 votes to override the veto, and the Senate would need 30; during each chamber’s last vote on the bill, 74 representatives and 30 senators supported it.

Nuisance Suits Move Through the Courts

The bill’s introduction came as 26 CAFO-related nuisance cases, filed in 2013 by 500 CAFO neighbors in Eastern North Carolina, make their way through the federal court system. The plaintiffs complain that the Smithfield subsidiary Murphy-Brown, LLC subjects them to a number of unpleasant and unhealthy ills: sickening stenches, mists of wastewater drifting onto their properties, swarms of flies, roadside “dead boxes” containing pig carcasses—that cause chronic illnesses, lower property values, decrease their quality of life, and lead to discomfort, anger, embarrassment, and fear. The trial could begin as early as this summer. 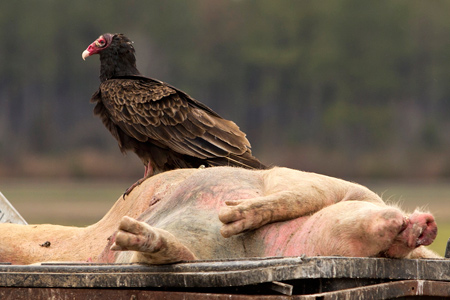 A vulture sits on top a dead pig. (Photo courtesy of Waterkeeper Alliance.)

Herring, 68, a plaintiff in one of the suits, lives on land her grandfather bought in the 1890s after being freed from slavery. Since the CAFO moved in three decades ago, she says she has had to deal with the operator spraying the field next door three or four times on a slow week—sometimes daily, occasionally at night.

“Even when he’s not spraying, when the day heats up, we’ll get a terrible odor coming from the south,” she said. “It’s difficult to get away from it, because the odor comes inside our homes.” If the spraying starts while she’s in the yard, sometimes she’ll run to the car to avoid getting misted. Herring was diagnosed with bronchitis two years ago, and the symptoms still haven’t completely gone away.

In its original form, HB 467 would have restricted compensatory damages available for the pending cases as well, but at numerous lawmakers’ protest, an amendment was added to limit the bill to future suits.

Representative Jimmy Dixon, the bill’s chief sponsor, represents Duplin and Wayne Counties, where one in 10 of the counties’ 18,000 people live within half a mile of a waste pit. He couched the bill as protecting “red-blooded, hard-working” American farmers from frivolous lawsuits that cut into their profits.

Dixon, who has received $115,000 from Big Pork since he was first elected to the North Carolina legislature in 2010, according to campaign finance records obtained by Durham-based INDY Week, did not respond to a request for comment for this story. 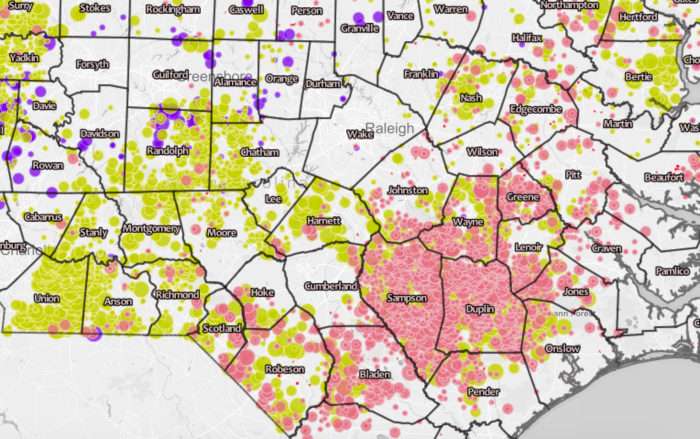 In the map above, yellow dots represent poultry CAFOs, pink are hog CAFOs, and purple are cattle CAFOs. Duplin County, where Elsie Herring lives and which Rep. Dixon represents, is the pink county near North Carolina’s southeast coast.

Opponents of the bill countered that the swine operations in the state, in which the animals are confined in warehouse-like barns and never see the light of day, are more factories than farms. And rather than American farmers, this bill stands to benefit the Chinese company WH Group, which acquired Smithfield Foods and its subsidiary Murphy-Brown, LLC in 2013, and owns the majority of the hogs in North Carolina.

“It was very clear from the beginning this bill was for the sole purpose of [undercutting] the Smithfield nuisance lawsuit that was going on,” said Naeema Muhammed, co-director of the North Carolina Environmental Justice Network. “They dressed it up in a pretty dress, but it didn’t fool anybody.”

The conflict circling the bill is compounded by the fact that industrial hog farms disproportionately impact low-income communities of color. A 2014 study by epidemiologists at the University of North Carolina at Chapel Hill found that the proportion of Blacks, Hispanics, and American Indians living within three miles of a CAFO are 1.54, 1.39, and 2.18 times higher, respectively, than the proportion of white people.

The U.S. Environmental Protection Agency’s (EPA) civil rights office is in its second year of investigating the health problems affecting minority communities living near CAFOs in North Carolina. So far, the office has found that the North Carolina Department of Environmental Quality (NCDEQ) has not done enough to alleviate the unhealthy conditions CAFOs inflict on communities of color. There is “deep concern about the possibility that African Americans, Latinos, and Native Americans have been subjected to discrimination,” the civil rights office wrote to state regulators in a 25-page letter in January. As the Trump administration dismantles the EPA, minorities may feel the effects of environmental racism even more acutely.

Before the veto, Craig Cox, senior vice president of agriculture and natural resources for EWG, said he feared the bill would exacerbate the already poor conditions in low-income and minority communities. “There’s a real concern this will encourage the location of operations in communities of color and low property value, because your liability will be lower if you’re locating in a poor community,” Cox said.

“In the words of a former deputy attorney general of North Carolina,” Cox continued, “it essentially enables someone to condemn their neighbor’s property. You can move in, create a nuisance, shell out a few thousand dollars, and you’re done.”

The fragile victory for CAFO opponents in North Carolina comes at a time when their counterparts nationwide received other good news: in April, the District of Columbia Circuit Court ordered the EPA to close a loophole that since 2008 has allowed CAFOs to not report the release of hazardous substances into the environment—which occur through activities like agitating the manure pits as part of their maintenance.

Under the ruling, starting this July, CAFOs will have to alert local, state, and federal agencies when their toxic emissions exceed public safety thresholds to allow emergency response teams—and nearby residents—to prepare and respond accordingly.

Meanwhile, in North Carolina, on the same day that Governor Cooper vetoed the CAFO protection bill, the law firm handling the plaintiffs’ case against Smithfield introduced new scientific evidence to federal court proving that hog feces does, in fact, exist on the surfaces of homes situated near hog farms. Researchers found pig intestinal bacteria on the exterior walls of 14 of 17 homes, and all six of the outside air samples they collected contained tens to hundreds of thousands of hog feces DNA particles, leading the plaintiffs’ attorneys to conclude that hog feces are almost certainly present inside those homes.

That empirical evidence disproves comments Representative Dixon expressed during an April 10th House debate on HB 467: “These allegations are at best exaggerations and at worst outright lies,” Dixon said of the concerns people living near hog farms have continually expressed. “Spraying effluent on people’s houses and cars, that does not exist. When the final chapter is written on these cases, we’ll see the people being represented are being prostituted for money.”

Muhammad of the NC Environmental Justice Network, who attended that Congressional debate, was appalled. “For him to stand in the halls of the legislative body, knowing his constituents were in the room, and to call people liars—that was one of the most disrespectful, disregarding things I have ever seen,” she said.

She is thrilled at the new development in the case. “It puts facts to what people have been saying, the proof to it,” she said. “For years, our government has gotten away with saying people are lying and making stuff up.”

Though the future of the bill and lawsuit remain uncertain, Herring says she is holding out hope. “At this point in time,” she said, “all I can do is just hope that the veto will survive and alleviate the constant feeling that no one is really listening or trying to do the right thing.”

Top photo, of a hog CAFO, courtesy of Waterkeeper Alliance.