Iowa’s governor vetoed a close of the national leader in sustainable agriculture research but eliminated its budget, leaving its three decades' work to revitalize local farm economies in jeopardy. 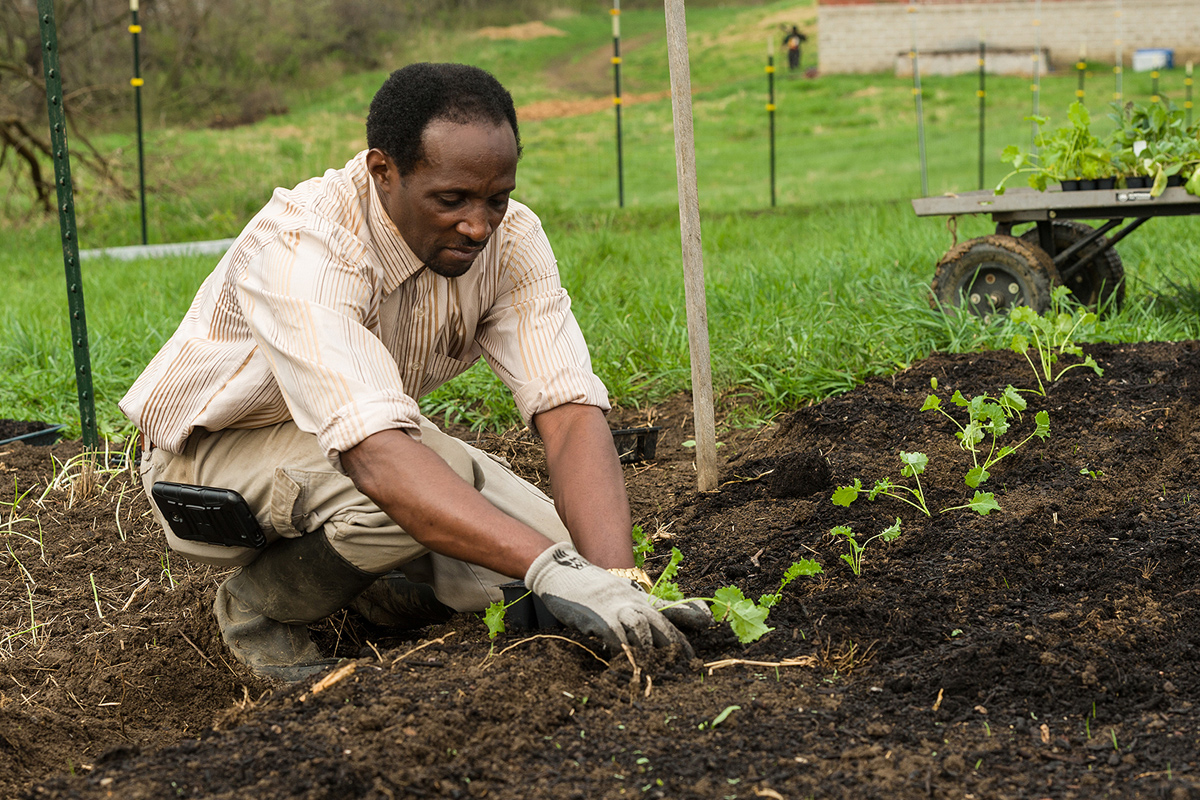 [Update: On Saturday, May 13, Iowa governor Terry Branstad vetoed a line-item in the state’s budget bill that would immediately close the Leopold Center. However, because no state funds have been appropriated to operate the Center, it is unclear how its work will proceed. Our original article appears below.]

You may never have heard of the Leopold Center for Sustainable Agriculture, but if you’re eating sustainable food, the odds are good it has something to do with its work. Named after the iconic conservationist, Aldo Leopold, the Center has been conducting and funding research that helped define today’s working definition of sustainable agriculture for the last 30 years.

But the Iowa State University (ISU)-based Center’s reign—covering not only soil and water quality, but also developing regional, rural food systems and increasing profits for farmers—may soon come to an end.

In April, the Iowa State legislature announced that as part of proposed cuts—many aimed at education—to fix a $118 million budget shortfall, it would eliminate the Leopold Center’s funding, causing it to shut down almost immediately. The move was surprising, since the center’s two main sources of funding—about $1.5 million from a tax on nitrogen fertilizer and $400,000 from the Iowa Board of Regents—had essentially been on autopilot for three decades, and the center was given no warning of an impending change. The budget is now awaiting Governor Terry Branstad’s signature.

In the meantime, both Iowans and sustainable agriculture advocates from across the country have been rallying to save the Center.

Researchers who’ve benefitted from its grant funding have written about its impact. Editorials have appeared in the Des Moines Register and the Iowa State Daily—the latter of which bluntly asked, “Has the Iowa Legislature lost its mind?” And the Center for Rural Affairs (CFRA) sent a letter signed by more than 50 individuals from organizations as diverse and far-flung as the Carolina Farm Stewardship Association to the Mississippi Sustainable Ag Network to Iowa lawmakers.

“As farms have gotten larger, rural communities have shrunk. For decades, the Leopold Center has given seed money to look at innovative ideas and new practices that help out both farmers and conservation efforts,” explained Anna Johnson, an Iowa-based CFRA policy program associate and ISU graduate. “We believe that is an important piece of helping keep rural communities going.”

It’s a salient point, given the fact that Branstad has said the budget cuts are necessary because farm income in the state is down, which means farmers are struggling, and water and soil quality issues continue to affect countless Iowa communities.

A History of Funding Innovative Research

The crisis comes just after the Leopold Center celebrated its 30th anniversary in March, with festivities including a panel featuring three of the Iowa legislators who helped establish the center in 1987 as part of the Iowa Groundwater Protection Act. The act established a tax on nitrogen fertilizer sales, a portion of which were allocated to the center for research and education efforts related to promoting profitable farming that conserved natural resources.

“It was one of the very first sustainable agriculture centers at a land grant university and was certainly a trendsetter,” said Ferd Hoefner, senior strategic advisor at the National Sustainable Agriculture Coalition. “Now there are dozens.” 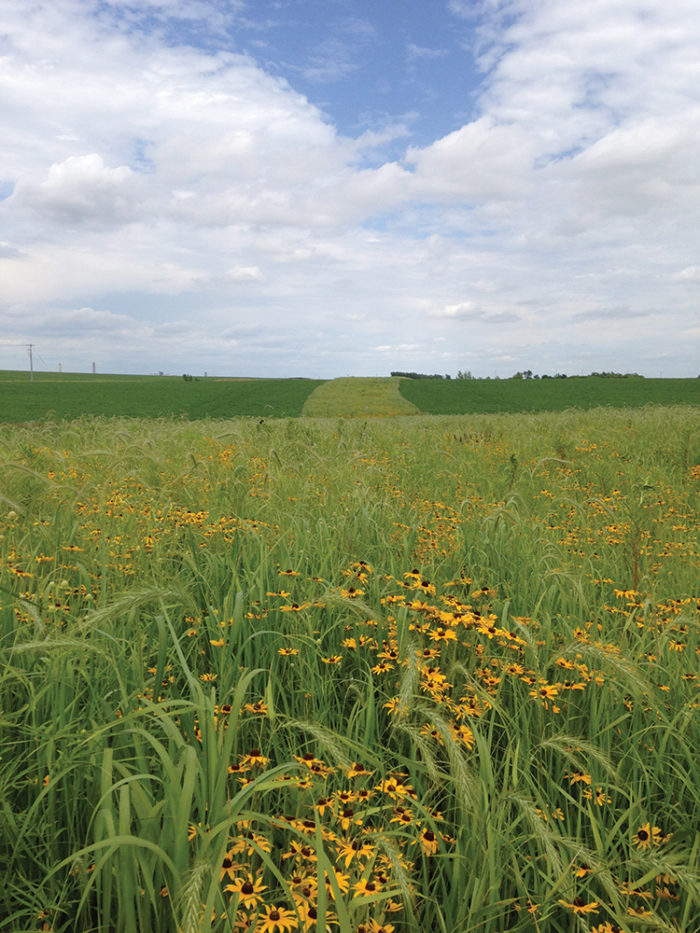 A strip of native prairie grows in a soybean field in late summer. Prairie strips have shown to reduce sediment transport by 95 percent, and reduce nitrogen and phosphorus transport by 90 percent. The Leopold Center funded the original study of integrating strips of prairie plants within farm fields to improve soil health and water quality.

The Center has plenty of reasons to celebrate. Over the past 30 years, it has awarded more than 500 competitive research grants on a broad range of issues, including cover crops, managed grazing systems, and increasing access to affordable local food.

“Due to the innovative research that our researchers have addressed over the last 30 years, the Leopold Center has developed a reputation for addressing challenges and opportunities that have made a more regenerative and resilient agriculture a practical and achievable goal for farmers in Iowa and throughout the world,” said Frederick L. Kirschenmann, a leader in sustainable agriculture and the former director of the Leopold Center.

In 2013, it produced a series of Funding Impact Briefs looking at six major projects the Center invested in over 10 years and found that for every dollar the center spent, the projects raised an additional $4.60 to expand the work. The briefs also found that 1,078 farmers shifted their practices to conserve resources or profited as a result of the work.

The Bear Creek Riparian Buffer Project is a great example. Between 1990 and 2012, the Leopold center invested $900,000 to protect the watershed and wildlife in Bear Creek. A research team worked with landowners to install more than 22,500 acres of protective trees and shrubs (or “riparian buffers”) planted along waterways. The effort cut nitrogen and phosphorus runoff (which contributes to toxic algal blooms) by 80 percent, removed up to 90 percent of groundwater nitrate, and led to the return of multiple bird species. The detailed results were made public to help other agricultural communities reproduce the effort.

The research also led to significant economic benefits across the state. Long-term agroecological research by ISU’s Organic Agriculture Program found that organic systems had lower production costs, comparable yields, and higher returns, and the producers the program helped transition to organic methods reported an 11 to 20 percent increase in farm income. Businesses participating in a project dedicated to developing local and regional food systems reported an increase of more than $1 million dollars of local food purchases between 2007 and 2009.

Director Mark Rasmussen also pointed to work the Leopold Center had done to bolster Iowa’s farm economy such as encouraging new, alternative crops like grapes for wine production and hops to fulfill demand from a growing craft beer industry, as well as research on low-input systems that incorporate diversity and cover crops.

“We’ve looked at…making agriculture more biological, trying to find ways to farm that don’t require such high cash outflow and the purchasing of expensive inputs and that still get farmers a reasonable yield and a family income out of the deal,” he said.

What’s Next for the Center?

After the news of the cuts to funding initially broke, the budget was pushed through rapidly, in less than two weeks. Governor Branstad has 30 days to approve it—by mid-May—but he could issue a line item veto to keep the Leopold Center open.

“We have a lot of stakeholders who have been contacting his office and basically asking him to revert back to the authorization language that created the center in the first place,” Rasmussen said. But there are a number of complicating factors. President Trump recently nominated Branstad as the U.S. ambassador to China, and after a hearing on May 2, he will likely be confirmed within the next few weeks. Lieutenant governor Kim Reynolds will take his place if he’s confirmed.

Despite loud outcry from the public—Rasmussen said hundreds of people have contacted Branstad to urge him to veto the line-item in the budget—he has no indication of the Center’s future. Yesterday, Rasmussen explained by email, “Today the Governor is signing a proclamation declaring this Iowa Soil and Water Conservation Week, which would be a good time for him to announce that he is saving the Leopold Center; but no word to us that this is going to happen.” 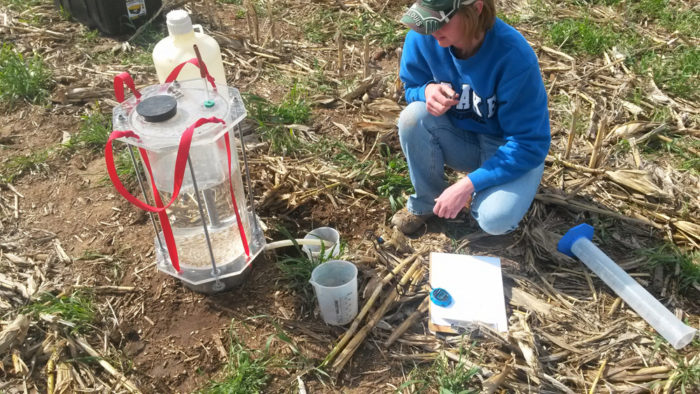 An Iowa State University student collects water infiltration data in a field with cover crops, as part of a Leopold Center supported research project. The project studied the long-term impact of cereal rye on cash crop yields, using data collected at 12 farms across the state for eight years.

In the meantime, Rasmussen has been sorting through how to handle the approximately 60 active projects that would be affected by the closing, including 30 new awards totaling $1.4 million that were just made this year. “We have sent out a notice forewarning them of what’s going on, but also saying, ‘Please stay tuned as we figure out how to handle this transition,’” he said, adding that he’s also concerned about the extensive research data currently housed on the Center’s website. “Even if we close down, I’m going to fight like mad to make sure our website is still hosted by someone, so all of that past information is still available.”

It will be needed. Despite one Iowa state senator’s comment that the cuts were not a concern, since the Leopold Center’s work could be considered “done,” a 2015 report from the Union of Concerned Scientists found that research on sustainable agriculture is profoundly underfunded in the U.S., making up just 15 percent of U.S. Department of Agriculture grants.

Ask Rasmussen about the issues facing Iowa’s farmers and citizens and his list is extensive—from low farm prices and profitability to the concentration of companies that buy and sell to farmers in agribusiness and the lack of economic opportunities in rural communities.

“From my perspective, the challenges that farmers will be facing in Iowa and throughout the world in the next 30 years will make the research of the Leopold Center even more important than it has been in the past 30 years,” Kirschenmann said. “The assumption that the Leopold Center’s work has been completed and it is no longer needed, as some have proposed, simply fails to anticipate our future challenges.”

Top photo: The Leopold Center funded a grant project “Small-farm business development incubator for refugee farmers” with Lutheran Services in Iowa. Congera Alex, originally from Burundi, transplants his crops in early spring in a community garden in Des Moines, Iowa. He will get help finding customers for his produce through this business incubator.

All photos courtesy of The Leopold Center.