Food Workers Rally for Their Rights on May Day | Civil Eats

Food Workers Rally for Their Rights on May Day

People who grow, process, and serve food showed up in full force to call attention to immigrant rights and low wages that profoundly impact the industry. 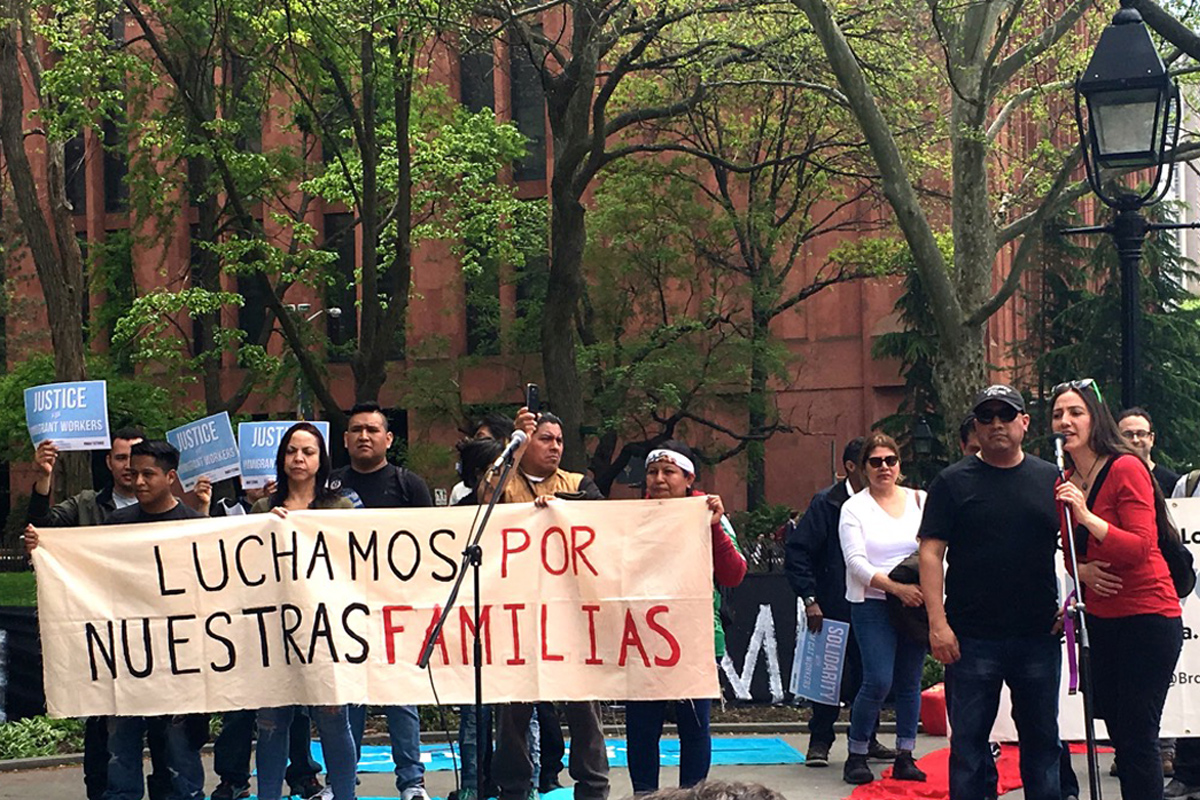 On May 1, just two days after the People’s Climate March, workers across the country and around the world rallied for living wages and better working conditions—and food system workers featured prominently at many of the protests.

“We want to let everybody know, in the government, and the new president, that we are good workers, good people, and we came here for one reason: to try to give a better life for our families,” said Hector Solis, who came to the U.S. from Mexico City 22 years ago and worked at the Tom Cat Bakery in Queens for 12 years.

Solis, who attended the rally with his wife and the mother of their two children, was one of 31 Tom Cat employees who were fired after a Department of Homeland Security (DHS) audit in March uncovered undocumented workers—many of whom had worked at the bakery for a decade—and threatened the owner with heavy fines.

In the wake of many similar anti-immigrant actions under the Trump administration, the Food Chain Workers Alliance (FCWA) called on its 29 member organizations, representing 300,000 workers across every segment of the food system, to participate in the May Day protests this week. Activists launched nearly 50 protests, bringing 15,000 people to the streets of Los Angeles, 4,000 to Grand Rapids, Michigan, and others marching everywhere from small towns in Missouri to Chicago, Seattle, and San Francisco.

May Day for Immigrants and Food Workers

May Day is celebrated as International Workers Day around the world and has historic roots in labor activism. Organizers in 2006 revived it as a day of action in the United States to call attention to immigration reform efforts. 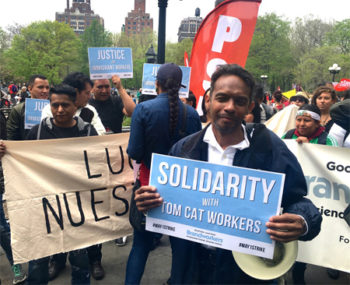 This year, immigration was again at the forefront of the activism, and the combined focus on immigrant and labor rights made the efforts particularly applicable to the 21.5 million people employed within the food system.

The USDA estimates that more than half of farmworkers in the U.S. are undocumented immigrants; reports have shown more than 10 percent of restaurant workers are (although the actual numbers are likely to be higher). And according to a 2016 FCWA report, regardless of immigration status, food workers earn the lowest wages compared to other industries—with workers of color and women facing even larger wage gaps.

“The minimum wage for tipped restaurant workers is still $2.13 [per hour] at the federal level, so first of all and most importantly, it’s not just low wages, but frankly the lack of a minimum wage in our industry,” said Saru Jayaraman, the co-founder of Restaurant Opportunities Centers (ROC) United, pointing to the fact that $2.13 per hour (compared to the overall $7.25 federal minimum wage) could hardly be considered a wage a person could live on.

Jayaraman said President Trump’s picks for Labor Secretary demonstrate an anti-worker ethos and that ROC United had been planning its May Day actions for the previous six months, with a focus on strikes in 10 cities around the country. And many restaurants agreed to support worker efforts. “We have many who are marching with their workers, many shutting down, and many allowing their workers to strike,” she said.

“We want the minimum wage to go up; we want equal rights and opportunities,” said Matthew Christopher Thornton, a cook marching with the ROC United group in Washington Square Park. “We want to be able to have a foundation to support our families.”

ROC United was just one of many groups represented at the protest. Unions representing food service workers, including 32BJ SEIU, also had a major presence at the New York City protests, and Brandworkers, a nonprofit advocacy organization dedicated to food-manufacturing workers, led the group from Tom Cat Bakery.

Several speakers mentioned the fear that many immigrants feel leaving their homes and going to work, given President Trump’s hardline policies and rhetoric related to immigration, such as building a border wall; a recent increase in the frequency of ICE raids; his threats to cut funding to “sanctuary cities” that won’t turn over immigrants to ICE; and his infamous reference to “bad hombres.”

“With the current political climate, it was really important to show, ‘we’re here,’” said FCWA campaign and education coordinator Diana Robinson. “To show their presence and voice especially when their families and neighbors are being criminalized, being put into deportation proceedings.” 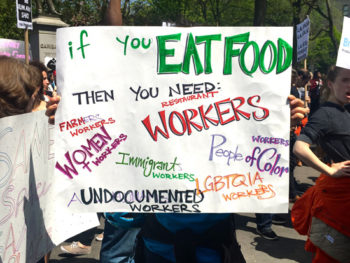 Robinson pointed to the importance of standing with other marginalized groups, and that mindset was on full display in New York. A protest later in the day in Foley Square downtown drew roughly 2,000 people, including groups representing women’s rights, the Movement for Black Lives, LGBTQ activists, and more.

“We need to build solidarity across struggles. That is the way we succeed,” New York City council speaker Melissa Mark-Viverito told the crowd packed into the square.

Food workers could take that advice as they plan their next action—which just may be a major march of their own.