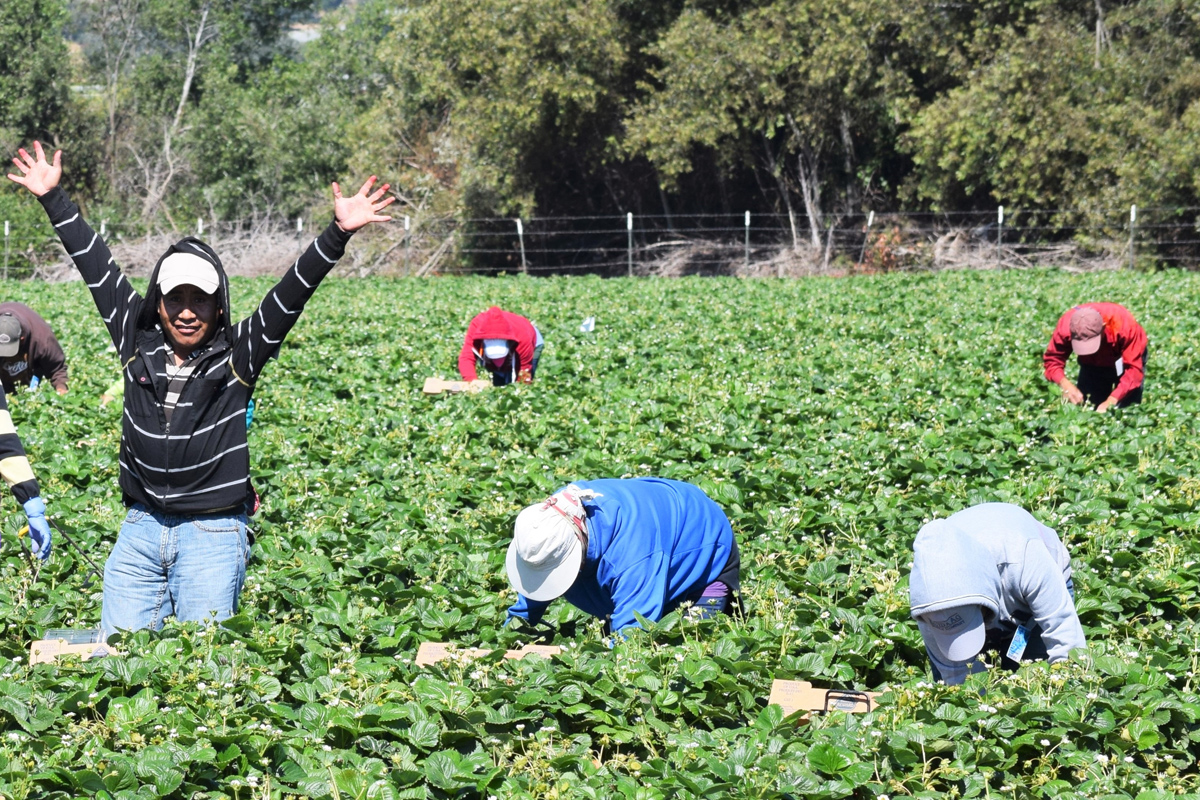 A version of this article was originally published at WhyHunger.org as part of their Food Justice Voices series.

You can tell it’s blueberry season in Hammonton, New Jersey, when the supermarkets, laundromats, and local parks get busy. The town calls itself “the blueberry capital of the world,” and from late June to early July, thousands of farmworkers arrive to work the blueberry harvest.

A single farm can employ up to 700 workers for those few weeks of blueberry season and, as of 2016, the average pay was $4.25 for 12 pints of blueberries picked. Twelve pints of blueberries equals what workers call a cario. To fill a cario, they have to fill a bucket attached to their waists one and a half times. An experienced worker can pick on average between 30 and 45 carios during a 10- to 12-hour workday.

The speed and stamina required to sustain this work takes a toll, and workers are not thinking about what to pick and what not to pick because the only thing that is on their mind is to pick as much as they can as fast as possible. In some instances, workers end up earning less than the minimum wage if they don’t pick fast enough.

What drives farmworkers—as many as three-quarters of whom are immigrants—to take on this work? As we observe Farmworker Awareness Week this week in the U.S., let us acknowledge the work and stories of immigrant farmworkers and understand why they have left their home countries and their families in search of the so-called “American Dream.”

The American Dream means different things for different people, but most come with the hope of rising out of poverty and providing future generations with opportunities that they themselves never had. They hear stories of possibilities from others who have returned from the U.S.; how life is lived to the fullest here, about the potential to make a lot of money, have a car, go on vacations. People cross the border, regardless of the high risks and potentially deadly consequences, with the hope to earn enough money to build houses back home and provide the best for their children, including an education.

However, once here, they encounter a harsh everyday reality. They work long hours in difficult conditions, suffering through hunger and exhaustion in order to have enough money and be able to survive the month while supporting their family. They are willing to eat cheap food that harms their health and work long hours to make more money. We say that people should work to live and not live to work, but in most cases people have to work constantly just to be able to survive.

Gaspar, one of the members of the Farmworker Support Committee (CATA), for whom I am a community organizer, told me his story:

I do not want my children to suffer like I did but how will I do that? If I stay [back home], I will not be able to better myself because I noticed that in my country, the situation is harsh. You can’t succeed.

And so I made a decision. I said “It’s better if I go, and I only ask God to help me make it, and I will make it no matter how hard the journey is. No matter how the route is, all I think of is getting there. And once I arrive there, I know that I will work and I will start sending money so my children can go to school.”

It took so long; I suffered. They kidnapped us and [even with everything else] that happened on the way here, I never gave up, for my kids. And I arrived here, and all my check, all of what I earned, I would send it and I told my wife to buy them clothes, take them to school so they can study and thanks to God my children, not all, but two have graduated.

My parents also migrated to the United States in search of a better life. Both my parents are from the state of Oaxaca in southern Mexico. Although they are from nearby indigenous rural communities, they each left their home at an early age back in the 80s on their own separate paths. My mother was 18 and worked as a domestic worker in San Diego and, at the age of 19, my father began his journey at a plastic factory in East Los Angeles. As we learn the stories of immigrants like them, let us also acknowledge what we can do to make life better for those who make our food system possible.

Deeply embedded in the causes of our unjust food system are the vast and ever-growing effects from free trade agreements that the U.S. has established with other countries. Beginning with the North American Free Trade Agreement (NAFTA) in 1994, which flooded the Mexican market with cheap and subsidized American food staples, these agreements have caused a remarkable increase in immigration to the United States from Mexico. No longer able to make a living at home, former subsistence farmers were forced to leave their homes and look for work in neighboring towns and cities. With job-seekers outnumbering jobs, the search continued north to the United States.

In order to find work for most of the year, immigrant farmworkers migrate from state to state depending on what is in season. On the East Coast, they start from the state of Florida harvesting oranges and move north, to North Carolina to work in the production of tobacco, to New Jersey for blueberry and peach season, to Pennsylvania and New York for apples, and then Maine for more blueberries.

Therefore, talking about food justice without talking about the greater picture and roots of U.S. capitalistic imperialism would be missing the point. In the U.S.’s quest for cheap goods and labor, we have intentionally created a need for undocumented, low-wage workers. As we pump cheap food into the Latin American and domestic marketplaces, it is the workers, who we lure here to help us produce this food, that suffer the consequences. Farmworkers are the ones who make sure we have our food on our tables and yet they are the ones who have the least access to it.

The United States’ food system runs on the principle of producing quantity over quality. It is not about whether it is nutritious but rather if it looks “good” on the outside, even though it might be tasteless or have been forced to grow in a short period of time. Our food system is dependent on pesticides and paying workers a low wage in order meet the demand for cheap food. This creates a vicious cycle because farmworkers are only able to afford cheap, processed food with little access to healthy, organic produce.

Although it’s a common belief that agriculture is unskilled work, making sure we have good food that is produced with care for the land in mind takes special knowledge. Many of the migrants who work in agriculture are people who grew up with these skills. Building food justice for farmworkers includes creating community gardens as spaces for people to grow their own chemical-free and culturally appropriate food, and to help others learn to do the same.

Though this is now called agroecology, these practices existed long before pesticides, long before free trade. Though they are not new, many are disappearing because our ancestors are taking this knowledge with them. Those who came before us were able to live long lives because they ate healthy and were not exposed to all these hazardous chemicals used to keep our food ripe and fresh and that are now not only destroying our bodies but our land, climate, and future.

Having a community garden is a small change, but this work can be a model that could have an impact across the country. Larger-scale changes require advocating for workers’ rights and educating others on how workers’ rights are a crucial component to achieving food justice.

More than 15 years ago, CATA joined with other organizations to develop the Food Justice Certification standards, a set of criteria that verify and recognize agricultural and food businesses who subscribe to a strong set of standards including workplace health and safety, fair wages for workers and fair prices for farmers, child labor, organic growing practices, and other issues that create a truly fair and safe workplace for workers and production for vendors and consumers. The wider the adoption of the certification, the more we will progress toward a truly just food system.

Just as food is treated as a commodity in the U.S. industrial model of agriculture, modern food policy and practice allow farmworkers to be treated as commodities and provide little health and safety protections. Essentially, in order to genuinely talk about a just food system we must first address labor inequalities.

Despite the political uncertainty we face—and because of the likely negative changes still to come from this administration—we know that now is the moment to organize ourselves and lift up our voices, as many times as it takes, against any discriminatory policies that are and will be implemented. We need to be united in order to face what is coming in the future.