A Land Trust Asks Farmers to Change Their Ways

The Sustainable Iowa Land Trust makes sustainability central to its work, helping young, sustainable, and diversified farmers grow in the land of corn and soy. 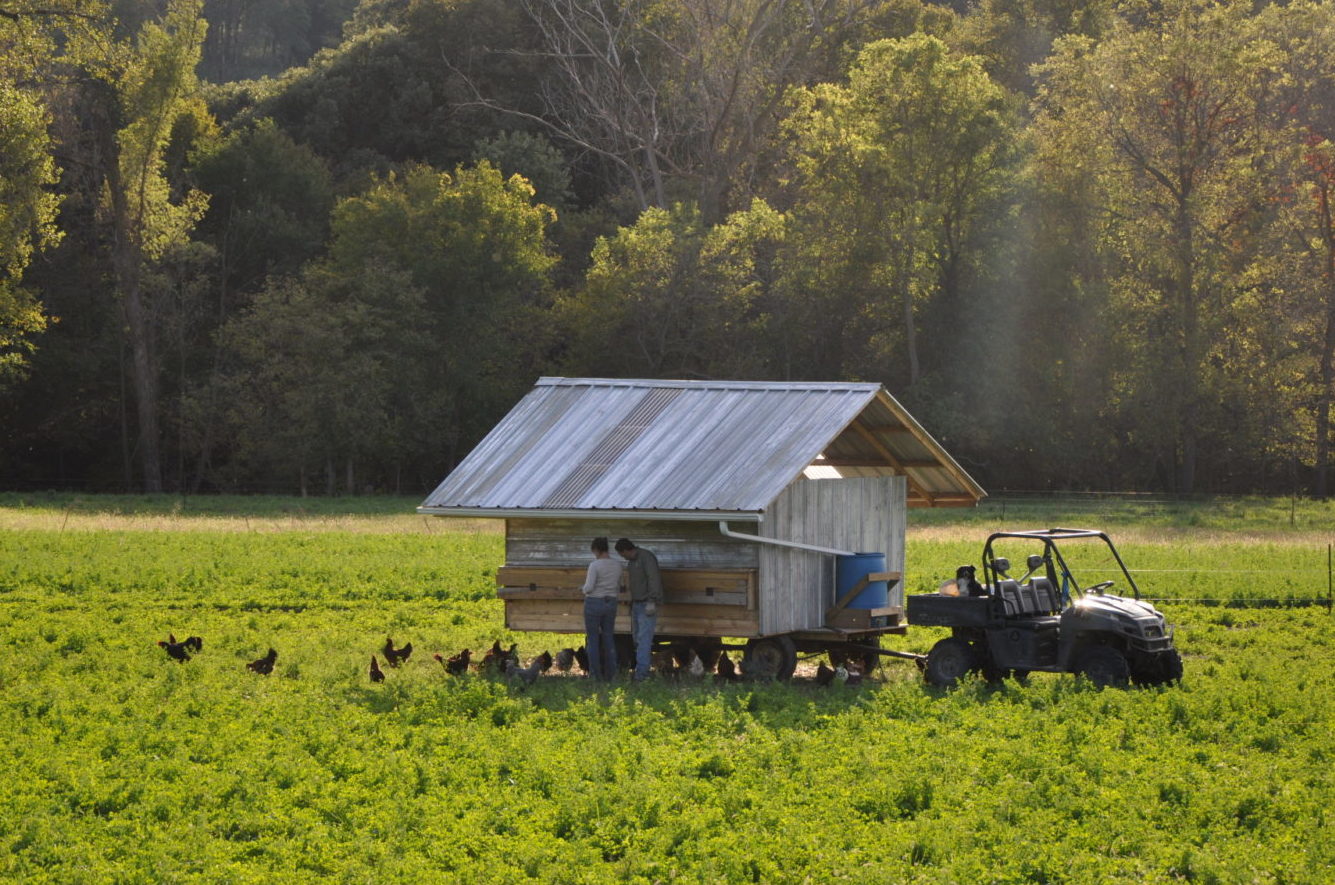 Edmund and Tricia Jackson have run a poultry and beef operation near Honey Creek, Iowa, for over a decade. Then, last year, they added a new piece of land with a plan to grow organic feed—corn and hay—for their animals.

“It has been a learning process,” says Tricia. “The more we studied, the more we were in awe of how it made so much sense to work with nature, and not against it.”

Organic certification is just the latest incarnation of the Jacksons’s ongoing work to make their operation sustainable. They added cover crops in 2007, rotational grazing techniques in 2008, and they run their beef on certified organic pasture.

But finding affordable land to expand their operation in 2016 was a big obstacle. In fact, the cost of land is often enough to make many young people re-think farming altogether. This is especially the case in ag-rich Iowa, which has the second highest land values after California at $8,000 per acre in 2016. In the rest of the Corn Belt, it was closer to $6,000, while the national average was around $3,000 per acre.

At a time when many farmers are looking to retire (and around half of Iowa farmers haven’t named successors for their land and operations), these high prices raise big questions about the future of land access in the state. They also suggest that mainly existing farmers—mostly those who already own plenty of land—will be the ones to buy up the bulk of the remaining land in the state. According to Iowa State University, 74 percent of those who bought land in 2016 in Iowa were existing farmers, and 22 percent were investors. Only 3 percent were new farmers just breaking into the business.

Despite these odds, one year ago, the Jacksons had the opportunity to sign an affordable three-year lease on 53 acres of protected land. The deal was made possible through a new, forward-looking conservation farmland trust called the Sustainable Iowa Land Trust, or SILT.

Suzan Erem, SILT’s president, said, “We are facing the largest land transfer in the history of Iowa.” In response, the nonprofit trust is gearing up to help farmers like the Jacksons find opportunities on some of that land. Erem said the trust now has more than 7,000 acres lined up for protection over the next 10 years, in addition to farmers already working on SILT land since its inception in 2014.

Farm trusts are organizations that are designed to protect land for farming rather than development.

Some trusts use conservation easements for this protection, perpetual legal documents that shield farmland from drilling, development, and other more lucrative commercial interests. These easements contain language that primarily protects the land in an ecological sense, but may also promote land stewardship practices, such as preventing runoff and erosion, and even planting buffers or intercropping to naturally replenish nutrients in the soil.

In the process, conservation easements immediately devalue land, since perpetual farmland is less valuable to developers. As a result, they create affordable leases for farmers.

Most language in these easements benefits farmers using a wide range of practices—from large, conventional corn and soy operations to small, diversified, and organic ones.

John Piotti, President of The American Farmland Trust (AFT), the country’s largest farmland preservation organization, said, “Very few ag land trusts consciously work [sustainable agriculture requirements] into their project.” But, he adds, the next wave of farmland protection “is thinking [more] about how we get our heads around better farming practices.”

And that’s where SILT—and groups like Massachusetts Equity Trust and PCC Farmland Trust in Washington state—enters the picture.

These land trusts place strict boundaries around the exact type of farming that can occur on the farmland they lease. SILT takes things a step further: It develops ground leases with farmers, spelling out the fact that sustainable food production must occur, and that farmers are required to work toward sustainable certification, such as USDA Organic or Certified Naturally Grown.

In Iowa, where conventional soy, corn, and hog production make up the vast majority of the farm economy, this is a significant break from the norm.

SILT president Erem said the discussion around sustainability and land trusts is too limited when it comes to what they’re capable of protecting. “[T]he discussion revolves around solutions that are akin to putting lipstick on a pig—grass waterways, riparian buffers, prairie strips, cover crops. Yes, given that we are hitched to conventional corn and beans, those solutions make sense. But none is permanent,” she added.

Erem hopes that SILT encourages the start of more small and mid-sized multi-crop and organic operations. “What if we weren’t solely hitched to corn and beans and hogs?” she asked. “What if we were willing to let this next generation do the hard work it seems to want to do, and grow small-scale fruits, vegetables, and livestock in a nature-friendly way?” 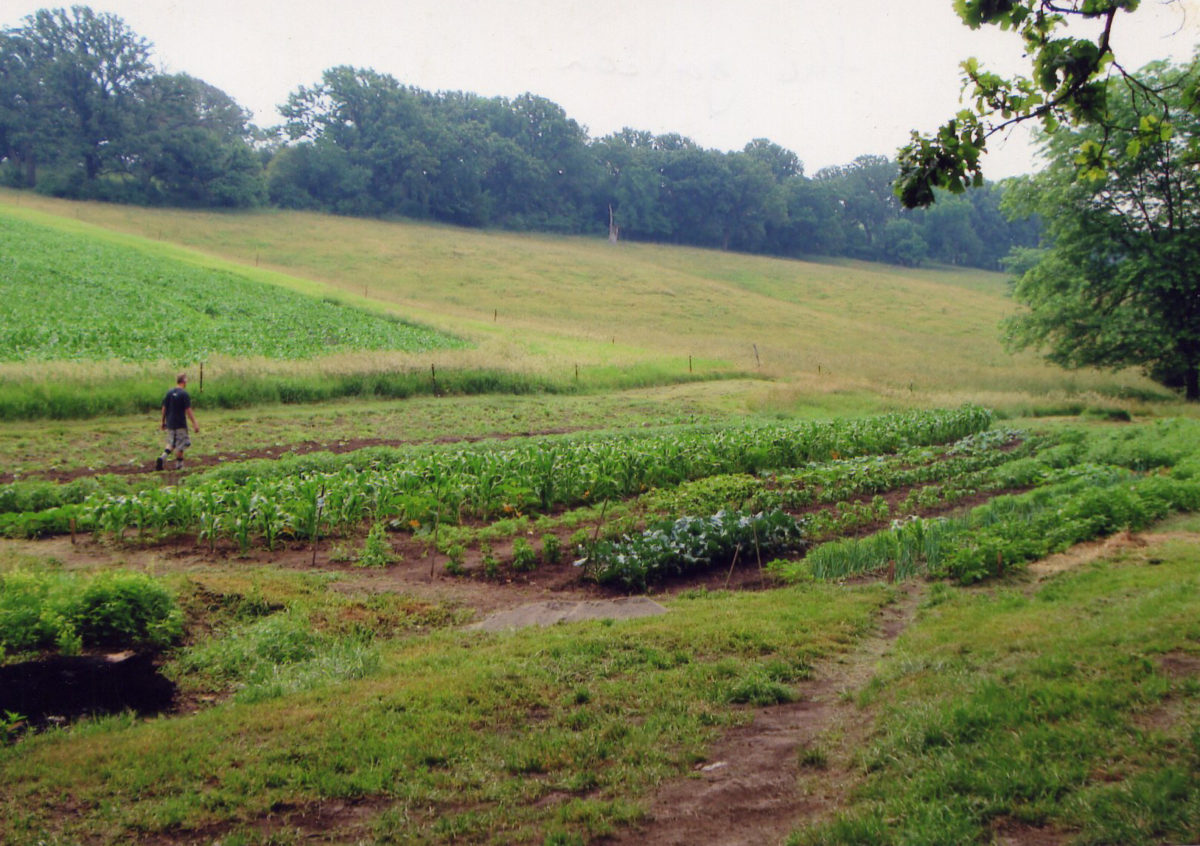 Another obstacle is the standard one-year farm lease. It takes three years to become certified organic with the US Department of Agriculture. The Jacksons had three different experiences with land they started the transition to organic only to lose the lease before hitting the three-year mark. Fortunately, SILT was aware of these needs, and granted them a three-year lease.

With such barriers still in place on a wider level, however, AFT’s Piotti believes a shift toward more robust sustainability on protected land will be slow. “To get land trusts to think about these broader issues—farming practices, farm viability, and land access—they require additional resources.

“It’s definitely worth doing,” he adds. “But it’s very hard.”

Thankfully, says Erem, interest in land trusts that include sustainable language is one palpable way for investors to help shape the landscape. At the 2014 Slow Money National Gathering, for instance, Erem says SILT won second place among 19 competitors, earning a $20,000 interest-free loan.

Of course, if ensuring that land remains accessible to young, sustainable farmers seems costly now, the future price to be paid is unthinkable—especially in the Midwest. Not only does Iowa hold the second highest price per acre in the U.S., it’s also the second largest producer of food in the country. In other words, Iowa may very well be a key battleground in the country’s transition to more sustainable farm practices.

“The Midwest is some of the best land in our country,” says Piotti. “It’s incredibly important as a natural resource. Even if there is not the same level of development pressure [as in coastal states], the threat to that land is greater, because we have so much more to lose.”