Meat Processing in a Box 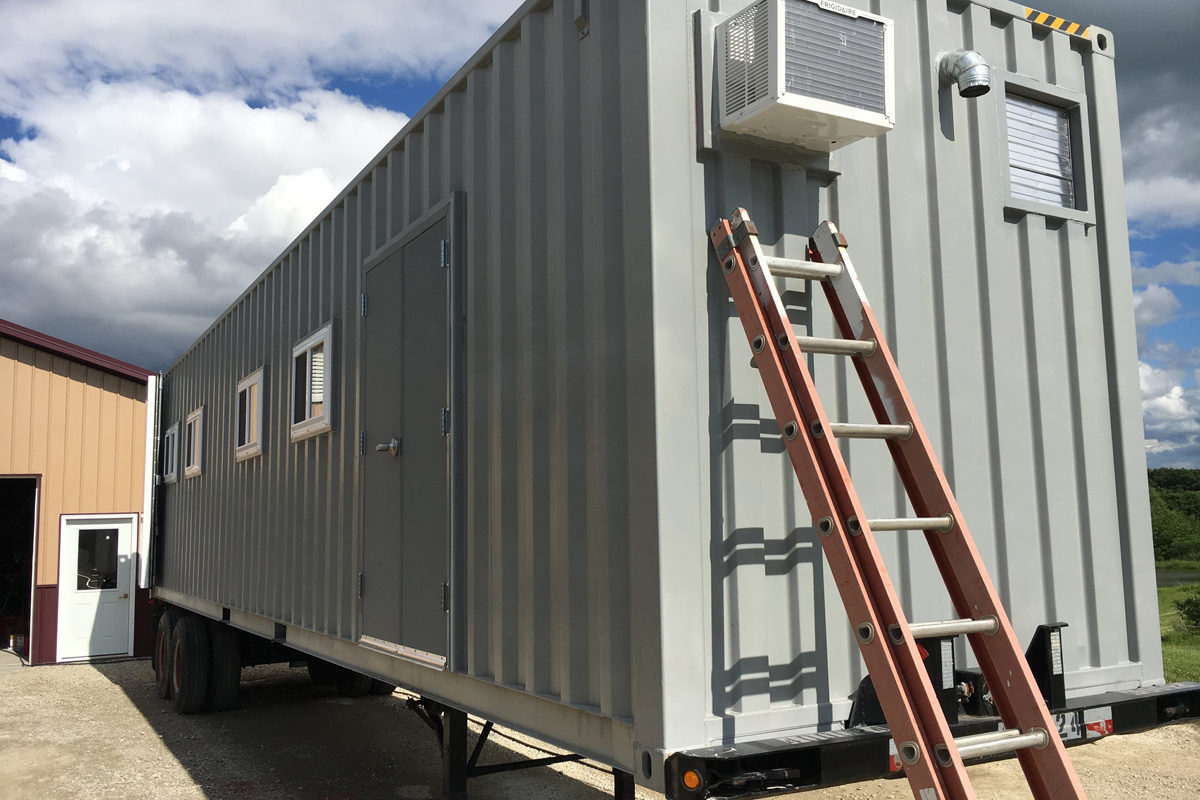 With the growing demand for local and humanely raised meats, pasture-based farmers have new market opportunities to become viable businesses. But the dearth of inspected slaughter and processing facilities in many regions of the country remains a chronic and expensive hurdle. Mobile slaughtering and processing units, which bring the processing plant directly to the farm, seemed to be a solution to the shortage, but the costs and management of operating these units has caused many of them to fail in recent years.

This was the case early in 2013 when the mobile processing unit (MPU) serving the Burlington, Vermont area went out of business. Farmer Bruce Hennessey, who raises thousands of pastured chickens and turkeys on Maple Wind Farm, a diversified livestock, poultry, and vegetable farm, and relied on the MPU, was at a loss as to how to process his animals to deliver to his wholesale and retail customers.

The regulations governing meat processing involve a layer cake of federal, state, and local laws. But for poultry, the majority of states have an exemption that permits qualifying small-scale producers to process their birds on the farm in a USDA- or state-inspected facility; some states cap the number at 1,000 birds, others at 20,000. Each exemption carries its own rigorous rules determined by the state. 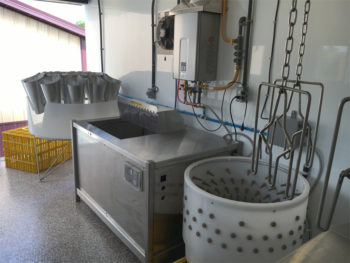 The inside of a Plant in a Box. (Click photo to expand)

Hennessey, who had been processing his own birds for years under these regulations, considered retrofitting an existing building on his property into a poultry processing facility for Maple Wind Farm and the other area farms suddenly in need.

“We decided to fill that gap and make a real business out of the pastured poultry,” he said. But when the brick-and-mortar project proved too costly and time-consuming, he took a chance on a “drop and go” unit called Plant in a Box. Sold by Featherman Equipment as USDA-compliant, it’s a slaughter and processing plant squeezed into an 8-by-40-foot shipping container. Hennessey was the first buyer.

Upcycled shipping containers are proving to be an affordable and scalable technology for urban and exurban farms. Across the country, they are being called into service to grow hydroponic lettuce, herbs, mushrooms, and other produce indoors at a profit.

In January 2017, Dirigo Food Safety launched another “plug and play” shipping container-based meat processing unit called the Locker. Like Plant in a Box, it’s a movable “cut and wrap” facility for beef, pork, lamb, and other meats to produce value-added products, such as bacon and sausage. Both Plant in a Box and the Locker are fledgling technologies that promise to resolve the logistical problems of the first generation of MPUs and the exorbitant costs of permanent processing plants while turning small- to mid-scale operations into sustainable businesses. As yet, Featherman has sold only four Plant in a Box units and the Locker prototype remains unsold.

Can the shipping container model adapt as well to meat processing for small- to mid-scale diversified farms like Hennessey’s? Many are holding out hope.

On-farm slaughter and processing is widely regarded by animal welfare advocates and groups like Animal Welfare Approved as the most humane treatment for livestock and poultry. It limits animal transport and the stress that goes with it. Along with addressing ethical concerns, farmers can retain quality control of their products from birth to butchering. Yet, the logistical and regulatory issues—from local, state, and federal agencies—create costly hurdles for time-, labor-, and cash-strapped farmers.

Efficiency is Schafer’s litmus. He is the owner of Featherman Equipment, a manufacturer of backyard poultry processing equipment based in Jamesport, Missouri, used by poultry vanguards, including Joel Salatin in Virginia and Greg Gunthorp in Indiana. Plant in a Box consolidates Schafer’s 20 years of experience into the layout, equipment, and processes that enable farmers to process their own poultry without a massive investment in infrastructure. “There is huge economic potential in processing and you have to be efficient to do it,” he said.

Produced in Yarmouth, Maine, the Locker allows farmers to produce retail cuts and value-added products, such as bacon, sausage, and charcuterie that can drastically increase profit potential and market demand. “There’s this blank in the market when you outgrow what your local processing plant can do and before you go to co-packing,” said Pfannenstiel. “[The Locker] allows people to come in at a price point that is an order of magnitude lower than building.”

While both of these shipping-container processing plants fulfill different needs, they have many common traits. Self-contained, equipped, and climate-controlled with windows and ventilation, the containers sit on a gravel or concrete pad and are hooked up to potable water, electricity, and sewer lines. They’re constructed with USDA inspection top of mind in every detail from finishing materials to process flow to drainage, and both Featherman and Dirigo provide HACCP guidance and consulting to clear either the state or USDA approval process.

Mike Badger, executive director of the American Pastured Poultry Producers Association says legal processing is a major challenge for the farmers he know. “One of the more important things they’re doing is the regulatory vetting and wrapping it in a shipping container, which is kind of cool.”

With delivery, Plant in a Box costs $112,000, and the Locker ranges from $67,000 for the basic unit to $140,000 for the fully equipped version. Both units offer a far more accessible starting point for processing than a brick-and-mortar plant that can cost millions.

In a recent webinar hosted by the Niche Meat Processor Assistance Network (NMPAN), Schafer and Pfannenstiel presented the estimated returns on investment of each unit operating just three days a week. For producers with the capacity to do their own processing or make value-added products, the investment can break even within a few years. Of course, solid cash flow projections are only one aspect of a complex system that determines whether independent farms can become more viable, self-sufficient, and sustainable.

Having an adequate existing market is key. “Your business already needs to be at that scale to cash flow that kind of infrastructure,” said Rebecca Thistlethwaite, program manager at NMPAN and the author of The New Livestock Farmer. And reaching that point by relying on outside processors is a challenge in many parts of the country. She also comments that it’s a true feat to process up to 20,000 chickens or 300 head of cattle per year—the proposed numbers of animals to make the units cost-effective—while also tending the farm.

And while the units are sold as turnkey, there are many local zoning rules, along with county and state regulations, that can delay or prohibit installing a modular processing unit. In Marin County, California, for example, local ranchers were prohibited from any on-farm slaughter on agricultural lands until the county supervisors overturned the 14-year-old ban this month. Current provisions in any locale may place limits on the numbers of animals and types of structures allowable, including Plant in a Box or the Locker.

As the first Plant in a Box customer, Hennessey experienced a lot of trial and error to bring the unit up to speed legally. “The reality of doing it is really hard,” he said. “For us, it’s [taken] a solid three years.” But in 2016, by adding an air-chilling unit, Maple Wind Farm processed about 18,000 meat chickens and 2,000 turkeys—at the best quality they’ve ever produced, said Hennessey.

For independent livestock and poultry producers, the labors and duress involved in meat slaughter and processing are as fundamental as the equipment. “A big part of their feasibility is that the owner is still going to be doing a lot for the labor and the processing,” said Thistlethwaite. “People have to think long and hard about that.”