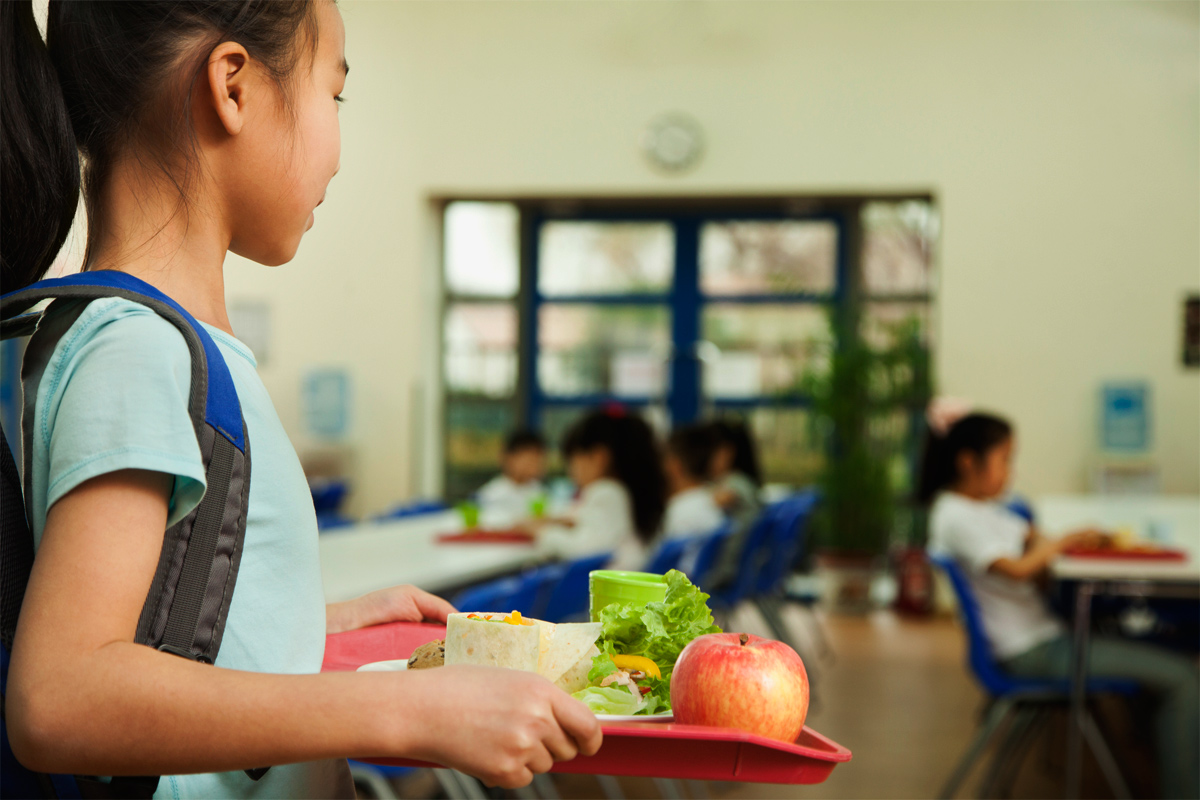 Cash-strapped school districts that want to feed students healthy meals often find themselves in a bind. But through a pilot program that served up less meat and cheese—and puts higher-quality meat, more beans, and more fresh produce on kids’ plates—the school district in Oakland, California has shown that it’s possible to get kids eating better food within a limited budget while reducing its carbon footprint.

That’s the takeaway of a report recently released by environmental nonprofit Friends of the Earth, which analyzed Oakland Unified School District (OUSD)’s efforts by comparing the impact of its carbon and water footprints, money spent, and types of food purchased over a two-year period.

Kari Hamerschlag, head of FOE’s food and technology program and lead author of the report, points to the fact that “overconsumption of factory-farmed animal meat and dairy has a huge impact on climate change and other environmental issues.” But aside from a several hundred Meatless Monday programs around the nation, most school districts don’t believe they have the bandwidth to plan their menus around addressing the problem.

By increasing the district’s fruit, vegetable, and legume purchases by 10 percent, reducing its meat and dairy purchases by 30 percent, and improving the quality of its meat by buying organic grass-fed beef from retired dairy cows in Northern California, FOE found that OUSD reduced its carbon footprint by 14 percent, reduced its water use by nearly 6 percent, spent 1 percent less per meal, and saved $42,000 in the process.

“It turns out that kind of strategy is a triple win for environmental, health, and financial savings,” says Hamerschlag.

The school district already had health- and environment-focused programs in place including Lean and Green Wednesdays and California Thursdays (which serves food only from the Golden State). It was motivated to make the additional effort in the interest of controlling costs and improving the quality and sourcing of its food, according to Alexandra Emmott, the district’s Farm to School Program supervisor.

“This fits into our Farm to School program and our goal to get five stars from the Center for Good Food Purchasing on how our food purchasing impacts local economies, health, animal welfare, environmental sustainability and having a valued workforce,” Emmott said, referring to the Center’s mission to help institutions improve the impact of its food purchasing in those five areas.

So after consulting with the Center, Emmott started working with Hamerschlag to devise the strategy that OUSD implemented in the fall of 2013.

Key to the plan was the decision to buy less meat and cheese and more plant-based proteins.

“Cheese has the third-highest carbon footprint after beef,” said Hamerschlag, referring to an Environmental Working Group report she authored in 2011, which tallied the lifetime greenhouse gas emissions of close to two dozen protein sources. Cheese’s footprint derives from the fact that it takes 10 pounds of milk to make one pound of cheese, coupled with the emissions of methane (a much more potent greenhouse gas than carbon dioxide) that cows belch into the atmosphere.

And because OUSD chose to source organic, grass-fed beef from Mindful Meats, which sources its meat from retired dairy cows, the beef has a smaller carbon footprint, since it is spread across a greater number of uses over the course of the cow’s life.

Emmott said that the students didn’t notice having less meat on their plates. In order to meet the USDA’s school meal nutrition standards (which has a protein requirement), the school substituted in more legumes.

“Generally, it’s been a positive reaction,” she said. “We’re careful with how we do rollouts of new recipes—we test at the secondary and elementary school level to make sure that students like the dish.”

Dishes like bean and cheese tostadas using fresh salsa, or chicken drumsticks with red beans and rice have been hits, Emmott said.

Changing school food menus requires an immense effort. But since OUSD has an established Farm to School program, thanks to grants from the USDA and the California Department of Food and Agriculture, the district had already formed working relationships with local farmers and sustainable food suppliers.

Still, controlling costs are challenging when OUSD can only budget $1.25 per meal, Emmott says.

And having the right kitchen and food storage infrastructure in place—along with staff training and communication since workers are spread out across 85 schools—is another challenge, she adds. But with the opening of a new OUSD central kitchen, farm and educational center in the works for West Oakland (funded by a city bond measure that passed in 2012), OUSD hopes to be able to shift away from prepackaged food even further, thanks to a fruit and vegetable processing room that will be on site.

“The district will be able to buy fresh foods in bulk at cheaper prices,” Emmott says.

Despite its challenges, Hamerschlag says that OUSD’s program can be used as a model for all types of institutions, including workplaces or hospitals.

“It’s not going to be feasible for all places to do the same kind of analysis we did [with OUSD],” she said. “But they can still make an impact by just serving dishes with more plant-based food and reducing the amount of meat in meals.”