Feeding hundreds from its rooftop garden, primarily via bike, Santropol Roulant aims to be a North American model of agriculture, composting, and food delivery. 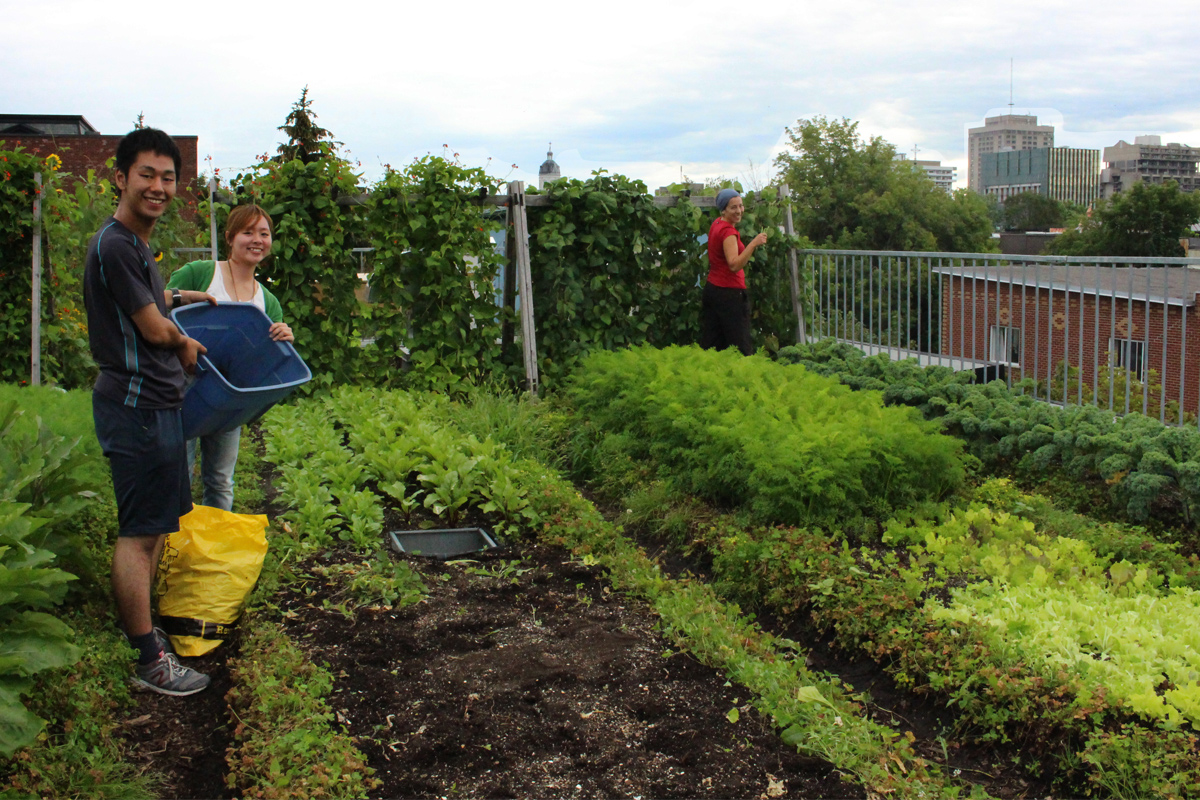 The rooftop garden at Santropol Roulant in Montreal looks like any other at first glance, with 40 self-watering containers and a small greenhouse lining the 1,500-square-foot rooftop.

Managing a well-running rooftop garden is a feat by itself, but Santropol Roulant (often called “the Roulant” for short) has a much bigger mission, and many more projects underway. A tour of its headquarters provides a view of staffers typing away at computers in the open office space while a mix of employees and volunteers gather around a large communal table to eat lunch together.

Passersby stroll in from the street and buy a few jars of pickled beets and carrots that line the walls. Volunteers also pass through, perhaps heading to the kitchen to prepare client meals or grabbing backpacks hanging on the wall to prepare for deliveries. And that doesn’t even begin to cover the activities happening in the basement’s bike shop and composting rooms.

Santropol Roulant—“the Rolling Santropol” in French, is named after the café at which the founders previously worked. It was originally founded in 1995 to connect youth with seniors, and over the past 20 years it has expanded to include a Meals-on-Wheels food delivery program, a rooftop garden to grow food for those meals, including compost for the garden, a three-acre farm off site, and much more. The programs work together to create a closed-loop model that could easily take root in other cities.

“Very few organizations actually function or very few Meals-on-Wheels function the way we work, integrating agriculture and other elements into our programs,” explained Brooke van Mossel-Forrester, the Roulant’s communications coordinator. Meals-on-Wheels programs across North America are slowly catching on to the benefits of an agriculture program, too.

The Roulant’s Meals-on-Wheels program is staffed by volunteers who cook and deliver about 100 meals per day, five days a week to seniors and other local clients with a loss of autonomy. In the early years, gardening and composting weren’t as clearly tied to its objectives. “It became…clear that food security was necessarily tied to our food system,” said Carlo Primiani, the Roulant’s urban agriculture manager, “and we don’t really question the inclusion of agriculture, including composting, in our work.”

The power of waste reduction became an important part of the Roulant’s work in 2001, before it had established an agriculture program. Kitchen scraps were collected and delivered to a community garden, eventually reducing their waste by 40 percent. Three years later, the group began experimenting with urban farming techniques, growing produce for the kitchen in unused spaces like balconies, patios, and rooftops.

In 2010, the Roulant moved into their current building and hauled 15 tons of soil onto the 1,500-square-foot rooftop to really expand their farming output. Two years later, they began farming on the western tip of the Island of Montreal in Senneville, about 25 miles from their offices. The certified organic farm produces vegetables for the kitchen, as well as The Roulant’s organic baskets and weekly farmer’s markets.

The Roulant also supports several collectives that use space in their building, including SantroVelo, a bike collective that began in 1996 as a place to store delivery bikes or fix flats. Today, the building houses beekeepers, worm composters, mushroom growers, and urban fruit-picking collectives, all of which function like autonomous teenagers: They live at home, but operate independently.

Montreal’s reputation as a bike-friendly city, hosting more than 400 miles of bike paths, coupled with the Roulant’s on-site bike collective teaching repairs, means many of the Roulant’s volunteers deliver meals by bike, saving money and cutting down on pollution. 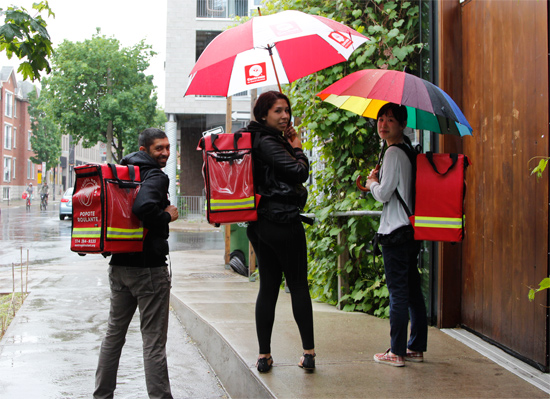 Yet delivering food this way presents some temperature-control challenges, which the Roulant began solving in 2015. The organization worked with textile prototyping service Protogear to develop waterproof and insulated backpacks adapted exclusively for cyclists’ comfort and safety in mind.

Each bag can hold eight to 10 meals, and the Roulant made the pattern available for any organization who wants to use it. “We didn’t create this backpack and say, ‘This is ours,’” explained van Mossel-Forrester. “We said, ‘This is a really amazing design and we want other Meals-on-Wheels or food delivery services to be able to use it.’”

Some staff and volunteers even bike to the Roulant’s farm in Senneville, although it takes about three hours. “We’ve had meetings at the farm and a few members of the staff will get up and leave at six in the morning and bike,” says van Mossel-Forrester. “It’s probably the most beautiful bike ride possible because it’s along the edge of the island.” Others choose to take the train from central Montreal and bike the last stretch of the way.

The harsh Montreal winters, with temperatures well below freezing and more than 80 inches of snowfall per year, prevent anyone except for the most dedicated cyclists from biking year-round. Delivery volunteers walk or take the bus during the dead of winter, and a car is required for two of the longer routes no matter the season.

The winter poses challenges to the kitchen’s closed-loop farming system as well. Seedlings aren’t planted until April and the first frost usually appears in October, but the agriculture team uses their greenhouse to extend the growing season as much as possible, and they also store beets, potatoes, and other roots to tailor their menus to the seasons. The Roulant also works with Moisson Montreal, Canada’s largest food bank, to collect leftover food from grocery stores that would otherwise be thrown away and tailors their menus to incorporate that rescued food.

The staff also strives to preserve the summer’s bounty, especially because so much fruit passes through the Roulant courtesy of fruit-harvesting collective Les Fruits Défendus. One staff member is dedicated solely to the food-preservation program, working with volunteers to make pickles, jams, and tomato sauces. The Roulant also makes fermented products like sauerkraut and kimchi. Last year they preserved 1,176 pounds of produce from the farm and 595 pounds of fruit from the collective.

While the Roulant’s waste reduction methods have come a long way since in 2001—the vermicompost collective now hosts several long tables and towers of soil-making worms in the basement—they can’t compost every type of waste, particularly leftover cooked food and meals. The kitchen aims to prepare precisely as much food as they need to serve their clients each day, sometimes there are last-minute delivery cancellations and other mishaps.

So in 2014, the Roulant began selling leftover products at what they call their “general store,” lining a section of the organization’s office with shelves lined with their preserved goods, the collective’s honey, and t-shirts. There’s also a freezer stocked with frozen meals comprised of leftovers from the kitchen. “There are some really dedicated buyers who come in and basically empty out the freezer anytime they can,” says van Mossel-Forrester.

No one staffs the general store. Instead, the Roulant posts a price list and a cash box for customers to make change, and they haven’t lost any money yet. Though this new program generates some extra revenue for the organization, its main purpose is waste reduction.

Through innovative solutions like the general store and the custom backpacks, Santropol Roulant is trying to reduce waste as much as possible. They also want to share these strategies with other Meals-on-Wheels programs around North America: It makes its internal evaluations and reports available to the public, and agriculture manager Carlo Primiani said it recently held a “cross-pollination” session with New Farms for New Americans, a Vermont group working on a social farming project.

As its agriculture methods are slowly catching on with other organizations, the Roulant may no longer be an outlier for North American Meals-on-Wheels programs. Similar programs in Cedar Rapids, Iowa, the city of San Diego, and Alameda County, California, have all broken ground on garden projects in the past seven years.

“Considering the impact of food production on our environment is really important,” said van Mossel-Forrester. “We try to, at the very minimum, use our resources to show others how to do it as well.”