The recent executive order is just one example of the livestock industry's ongoing attack on “burdensome regulations.” 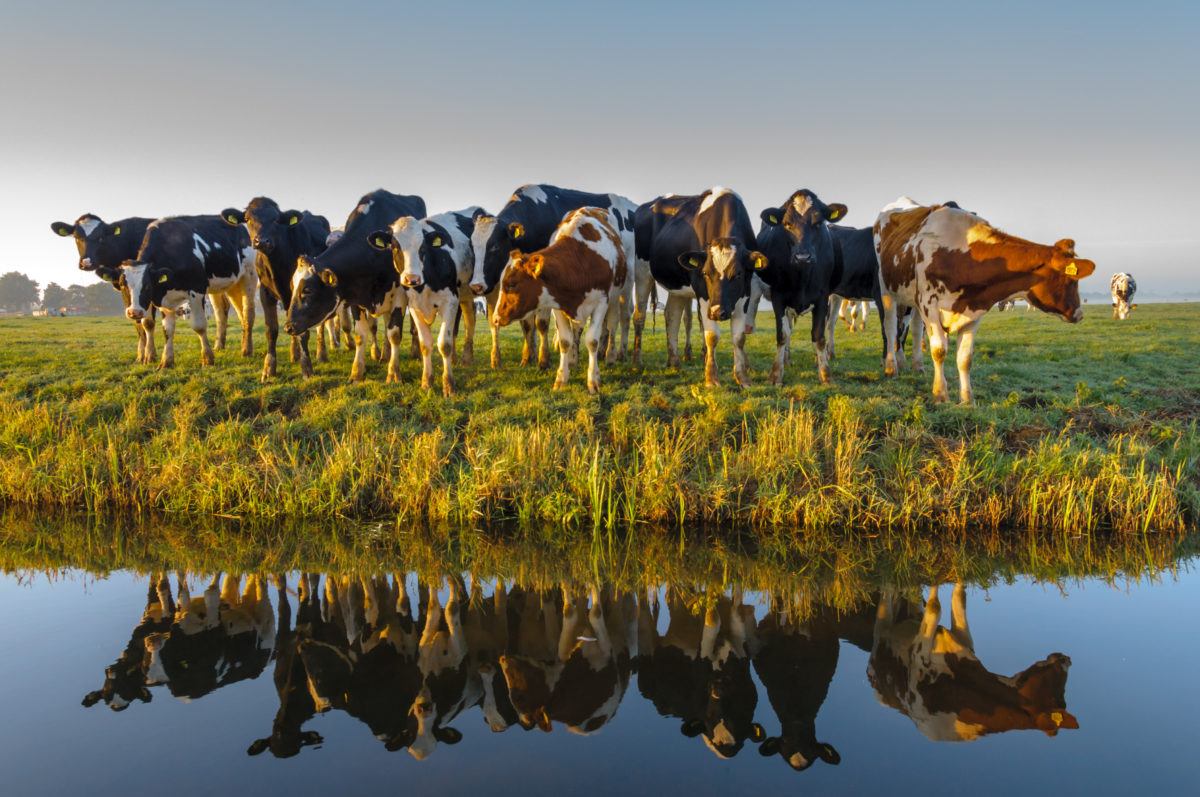 [Update 1: On January 31, 2018, EPA administrator Scott Pruitt announced a two-year delay on implementing the Waters of the U.S. rule while he works to repeal and replace it.]

[Update 2: On December 11, 2018, the Trump administration unveiled a sweeping plan to limit the number and types of waterways that would be covered under the Waters of the U.S. rule.]

[Update 3: On September 12, 2019, the Trump administration finalized the repeal of the Waters of the U.S. rule, although California’s Attorney General, Xavier Becerra, announced the state’s intention to “defend” the rule, presumably through further legal action.]

When President Trump signed an executive order yesterday directing his administration to rewrite the “Waters of the United States” (WOTUS) rule, he was making good on a promise he had made to industrial livestock producers on the campaign trail. And the livestock industry applauded this news.

In a statement released by the National Pork Producers Council (NPPC), president John Weber said: “America’s pork producers are very pleased” and called the rules “ill-conceived” and “a dramatic government overreach.” The National Cattlemen’s Beef Association (NCBA) went a step further. In its statement, president Craig Uden said, “Ultimately, this rule should be taken out behind the barn and put out of its misery.”

Environmental groups, on the other hand, expressed dismay. “Gutting this rule would threaten the wetlands and streams that feed the drinking water sources for 1 in 3 people—or 117 million Americans. It would put our rivers, lakes, marshes, and bays at risk of pollution,” the Natural Resources Defense Council said in a statement.

And while much is yet to be seen about how the executive order will play out, it’s clear that WOTUS is just one piece of a larger puzzle. Industrial livestock proponents have long attacked “burdensome regulations” as a key roadblock to their success. To hear them tell it, a combination of environmental protections, animal welfare rules, and policies associated with strengthening market competition have long threatened their existence.

Now, with the election of President Trump, and the large Republican majorities in Congress and in state legislatures across the Livestock Belt, hopes are growing for a massive regulatory rollback.

Met with Resistance from the Start

The WOTUS rule was finalized in 2015 and was the Environmental Protection Agency’s (EPA) attempt to clarify the regulatory boundaries and jurisdiction for water protections. The Obama-era EPA conducted a years-long process to formulate WOTUS in an attempt to answer long-standing questions about which wetlands, streams, creeks, and other bodies of water are governed by the federal Clean Water Act.

Throughout the rule-making process, the NCBA and NPPC coordinated with other industrial agriculture groups to challenge the WOTUS proposals. Livestock producers and the agricultural press were filled with a steady stream of WOTUS worries, such as concerns that farm ponds and ditches could fall under Clean Water Act permitting rules. Front organizations such as the Waters Advocacy Coalition were formed in an attempt to challenge the rule. The American Farm Bureau Federation, helped to coordinate WOTUS challenges with a social media and video campaign, #DitchtheRule.

In July 2015, after the rules were issued, the NPPC and NCBA joined with other industry groups in suing the EPA to halt its implementation of WOTUS.

Similarly, lawsuits were launched all around the nation in a well-coordinated legal attack. One such suit was filed by recently confirmed EPA Administrator Scott Pruitt. More than 100 lawsuits moved along for 18 months, and were consolidated into a group in the Sixth District Court of Appeals. Then, in January, the U.S. Supreme Court waded into the legal fray, deciding to take up WOTUS as part of its 2017 docket.

The NCBA was quick to respond to the Supreme Court news. Scott Yager, NCBA’s environmental counsel, said at the time, “The Supreme Court’s decision to hear our appeal is a victory for America’s cattle producers and all private property owners across the country. It shows that the Court has a continued interest in private property rights and we look forward to oral arguments this spring.”

Now, that process has been further complicated. With the signing of the executive order, President Trump has directed the EPA to “review and reconsider” their 2015 WOTUS rule.

The nomination and approval of Pruitt as EPA chief was the livestock industry’s first big win. The former attorney general of Oklahoma has a track record of supporting the industrial livestock sector.

In its statement of support for Pruitt, the NCBA’s Uden wrote, “For too long, the EPA has been a runaway bureaucracy largely out of touch with how its policies directly affect folks like cattle ranchers, who use—and responsibly care for—the environment while providing the safest and most abundant food supply in the world.” NCBA signaled its support of working with Pruitt on one specific regulation, “killing the onerous ‘waters of the United States’ rule.”

“It doesn’t matter whether you’re talking about antitrust issues, manipulation of livestock prices, national security and food security, the Farm Bill, or environmental protections, the commodity groups want to write the rules. Or get rid of the ones that stand in their way,” said Tim Gibbons, an organizer for the Missouri Rural Crisis Center. His organization is made up of 5,500 farm and rural families who collaborate to assuring a future for independent family farmers, and improve competition and transparency rules in the livestock market.

The Center has long decried the policy positions and approach of the “commodity groups” like the NPPC and NCBA. From the National Corn Growers Association to the American Soybean Association, the commodity groups often work together on national and state-based policy issues. They tend to collaborate on legal issues as well, forming a nexus of industrial agriculture support for the pro-corporate agenda.

But like the commodity groups with their friendly relationship around a common agenda, groups like Gibbons’ collaborate to resist the industrial livestock lobby. Missouri’s northern neighbor is home to Iowa Citizens for Community Improvement (Iowa CCI), which does similar work.

Nick Schutt became involved with Iowa CCI when an industrial livestock firm decided to build a 3,000-head cattle feeding facility half a mile north of his farm. “This is the type of operation that puts people like me out of business, making it so I can’t even get in,” he said.

Schutt dreams of making a living as a small dairy farmer, but fears the industrial livestock agenda will make it impossible. So for now, like the vast majority of family farmers, Schutt works off the farm at the local grain cooperative.

“To hear these factory farm guys tell it, we should be having a booming economy,” he said. “They blame permits and rules and the EPA, but they are building out their giant livestock factories all around here. Where’s the benefit? Where’s the hardware stores? Where’s the jobs? Why are lots of towns just dying out? Why are our schools closing down? I just don’t see it.”

Patty Lovera, the assistant director of Food and Water Watch, reflects on watching WOTUS over the last two years, and believes the rules were routinely blown out of proportion as a way to scare farmers. “This was not accidental. It was clearly manufactured. It’s part of the demonizing of the actual concept of industry regulations,” she told Civil Eats.

Lovera likens the way farmers feared the impact of WOTUS to an “urban myth, only this time … we’re talking about rural communities, but this time the myth really happened.” She points to the fact that the EPA responded to industrial agriculture challenges by pointing out that WOTUS, in nearly all cases, exempts farmers from Clean Water Act permit regulations.

Ellen Gilinsky, former EPA senior policy adviser for water issues, traveled around farm country to clarify the reality of  the rule’s impacts. Upon news of today’s executive order, Gilinsky told NPR there was “lots of bloodshed over this rule that didn’t need to be.”

Gilinsky would visit farms, “actually walk their fields and ask them ‘What are you worried about?’” Repeatedly, the farmers pointed to ditches and other features discussing their inability to perform regular agricultural tasks. Gilinsky’s response: “I would say that that’s not true.”

Nick Schutt worries that industrial livestock groups will double down on their growth, now that all regulation is likely to be challenged. But he vows to keep fighting false controversies. “People learn the truth when it comes to their doorstep. Before that, they don’t ask questions,” he said.