Building a Sustainable Food System, One Campus at a Time | Civil Eats

Building a Sustainable Food System, One Campus at a Time

As the sprawling University of California system works to source all of its food sustainably, challenges slow its progress, even in the bountiful Golden State. 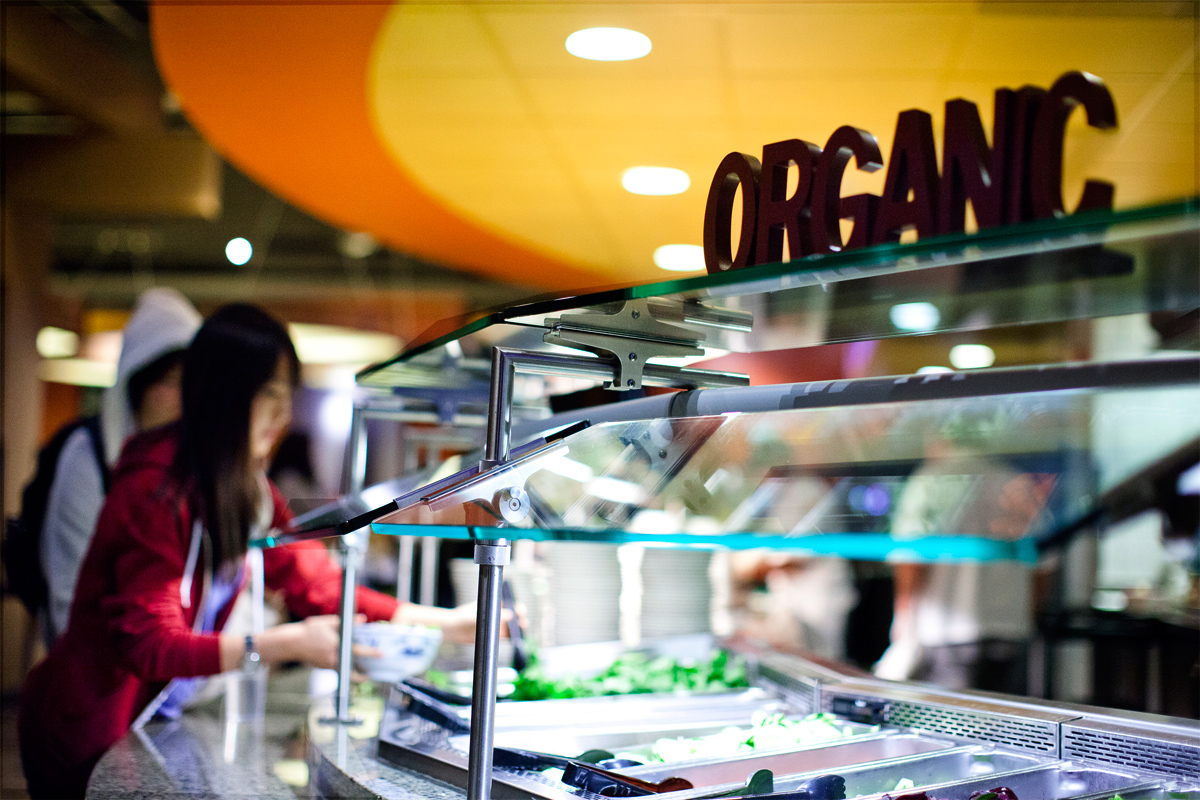 Since 2009, the powerhouse University of California system, whose 10 campuses contribute over $46 billion to the state’s economy, has included sustainable foodservice guidelines to its expansive Policy on Sustainable Practices. According to the recently released Annual Report on Sustainable Practices, its modest but necessary goal to purchase 20 percent of the U.C. system’s food from sustainable sources by 2020 has pretty much already been achieved four years early—with some caveats.

Although the U.C. system is making clear progress toward sourcing local, organic, and otherwise sustainable food, it’s still a ways from full sustainability over the long term. Last year’s spending on sustainable food was a small, but not-insignificant, decrease from 2015, owing in part to California’s long drought and the fact that supplies of food that meets U.C.’s sustainability criteria can’t often meet demand. If an institution with the desire, demand, and demographics to prioritize local and sustainable food is only incrementally improving—20 percent sustainable is still 80 percent unsustainable—what will it take for others to get there?

Situated as it is amidst California’s agricultural abundance, buying local is a key platform in U.C.’s strategy. A 2014 best practices report outlined how U.C. Santa Barbara (UCSB) and U.C. Merced can make it easier for small growers to do business with the U.C. system, particularly by buying more food within 250 miles of home.

Starting in 2009, UCSB began establishing weekly quotas of local, sustainable produce for each dining common, as well as a strategic plan for more local, in-season produce. That same year, UCSB professor of environmental studies David Cleveland analyzed the flow of produce out of fertile Santa Barbara county, concluding that the county exports more than 99 percent of the 2.4 billion pounds of produce it grows.

Keeping that money in California, as close to the sprawling U.C. system as possible, has since borne fruit, although much of it is low-hanging, explained Tim Galarneau, co-chair of the U.C. Sustainable Food Service Working Group, as well as co-chair of the U.C. Global Food Initiative‘s Food Access & Security Subcommittee.

“We’re seeing over $20 million of ecologically driven, local, humane, and sustainable procurement, so we’ve achieved our 2020 goal in advance,” he said. “I think our challenge going forward is realizing that 20 percent is considered a minimum-level threshold, and we can’t simply flip a switch overnight and go to 100 percent commitment. We’re talking about a good pace of incremental change.”

What Galarneau has learned about that pace of incremental change is that it’s not as easy to replace a sustainable foodservice vendor as one might think, especially for a system as expansive as UC. Sometimes you can take as many steps back as forward.

“When you lose a contract across so many campuses, you have to circle back and go through the entire process again,” he explained. “As you move toward that 20 percent, it becomes more difficult to find the low-hanging fruit. It’s really not there anymore.”

He added, “If there are entrepreneurs out there who want to create an organic, sustainable mozzarella cheese at the institutional scale, they would make a killing in California.”

And it’s not just cheese, which accounts for a huge monthly budget staple on most college campuses, Galarneau explained. He’s also making the rounds across California’s campuses and farms in search of grass-fed beef, sustainable fish, and especially poultry—”because poultry is not paltry,” he joked—that can locally compete with larger agricultural concerns like Harris Ranch, Tyson, and Perdue, for example.

Making progress on those foods and others would go a long way to pushing the entire U.C. system closer to Galarneau and U.C. Santa Cruz’s more ambitious goal of 40 percent sustainable food purchases by 2020.

“There have been local efforts toward growing coffee, as well as bananas, especially in Santa Barbara,” Galarneau explained, looking for room for improvement. “I think California organic rice is always something that can be focused on; we have a few producers, like Lundberg or Massa, that are burgeoning the market. I think the ugly produce movement also has a place, as well as fresh preparation at the right volume, scale and season.”

Students at U.C. Davis (UCD) alone consume about 1.5 million 8-oz. cups of coffee per year, which is roughly 48,000 pounds of beans. Multiply that equally roughly across the entire U.C. system’s 10 campuses, of which UCD isn’t exactly the largest, and you have an overwhelming demand for a collegiate necessity.

Although coffee traditionally has been commercially cultivated in only one American state, Hawaii, it has become an intriguing Californian possibility—especially now that the first public genome sequence for Coffea arabica, the primarily Ethiopian species comprising over 70 percent of global production, was recently released by researchers at UCD’s College of Agricultural and Environmental Sciences. The sequence was based on the work of Santa Barbara farmer Jay Ruskey and U.C. Cooperative Extension farm advisor Mark Gaskell, who together pioneered the cultivation of the first commercial coffee plants in continental America.

“Hopefully, the mapping of the coffee genome will yield multiple benefits for coffee crop improvement down the road,” the San Luis Obispo-based Gaskell explained, adding that he sees more new plantings and overall coffee acreage in central and southern California. “This will always be a niche crop on small farms in California destined for high-value niche markets, but fortunately we have clearly demonstrated that very high-quality coffee can be produced in California.” 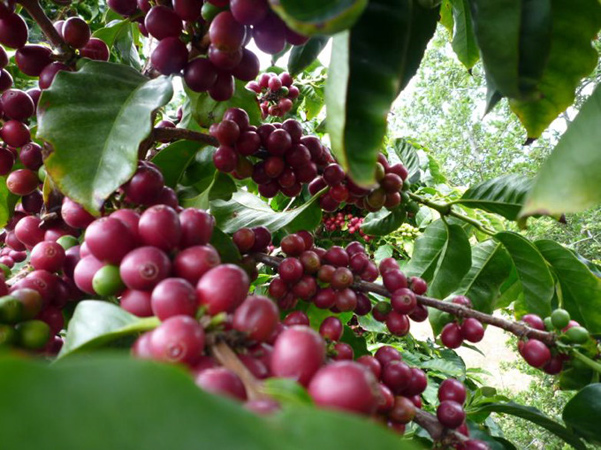 “I am a farmer trying to make money in an expensive production world,” added Ruskey, whose Good Land Organics farm was the first in California to grow the global staple. “We’re trying to grow coffee with California agricultural science aiming for higher yields and superior quality; we can be very resource-efficient with the right cultivars, sensors and applied systems. I think the work we’re doing will hopeful result in a resilient coffee-growing system that can be globally applied.”

From coffee to cheese to other exceedingly valuable crops, California clearly has the climate and drive to grow its own. And having the nearby, hungry U.C. system as a customer willing to save money and operate more sustainably could seal the deal—if the budget is there to pay for it.

Although the U.C. system is moving past its modest 20-by-2020 goal, sobering challenges still remain—from awareness raising to crop sourcing to drought busting and beyond—when it comes to achieving 100 percent sustainability, if that’s even possible.

“Sourcing continues to be a challenge,” said Danielle Kemp, a dietitian with UCSB’s Residential Dining Services and co-chair of the U.C. Global Food Initiative’s Small Growers Subcommittee. “It is still difficult to understand what products are local from large grocery vendors, because the information isn’t accessible.” She added that raising awareness and educating diners about nutrition or sustainable food options poses another big challenge in an age of information overload.

“Climate instability and destabilized weather patterns are also significant,” said Galarneau. “I think we’ve been pretty successful in trying to account for all of that, but future price speculations in the food market are pretty scary. I think developing a menu cycle that plans for these disruptions is necessary, whether you are talking different ingredients or moving away from the American-style, all-you-can-eat buffet to unique, quality food in smaller portions.”

“I think we have to change our expectations,” he concluded. “We have an issue in America; we like big things. But we need to understand that small is beautiful, too.”

U.C. Berkeley foodservice photo courtesy of The University of California.