The Secret Life of the Northern California Coast | Civil Eats

The Secret Life of the Northern California Coast

In his new book, lifelong recreational fisherman and forager Kirk Lombard champions the obscure and offbeat fish, people, and communities that abound in Bay Area waters 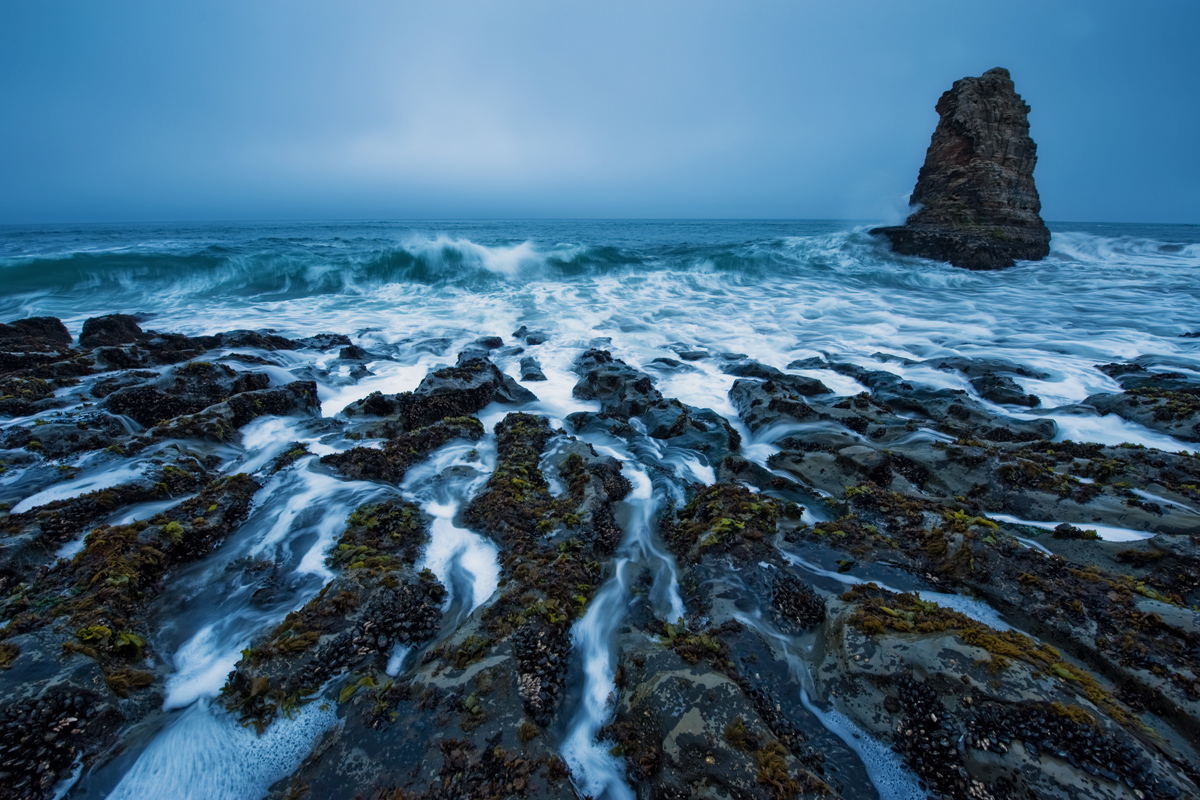 Lifelong recreational fisherman and self-described “fish nerd” Kirk Lombard wants you to know that there’s an entire universe to Northern California fishing and marine life beyond what meets the eye. As a champion of obscure and offbeat information about lesser-known players in Bay Area waters—bait fish, sea urchins, and seaweed, to name a few—he has shared his adventures in the Monkey Face News zine (and later blog) since the ’90s.

After Lombard stopped blogging a few years ago, one of his readers suggested he write a book to pass on the information still running around in his head. Two years later, that idea has blossomed into The Sea Forager’s Guide to the Northern California Coast (Heyday, 2016), an unconventional volume vividly illustrated by artist Leighton Kelly. 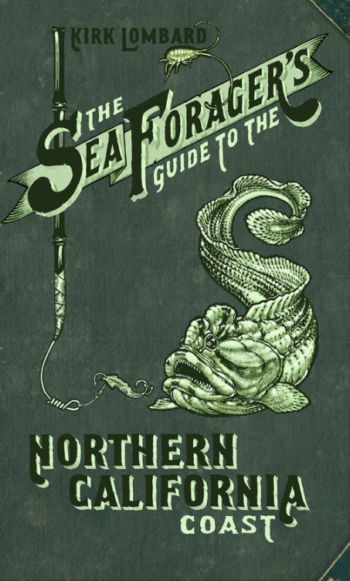 Part guidebook, storybook, and instruction manual, with a few verses thrown in between, Lombard wrote the guide for anyone who’s curious about aquatic life in Northern California.

In it, he dispenses his hard-earned tips and techniques on how to be a sea forager—someone who finds and harvests his or her own fish, shellfish, and seaweed. And he includes a gear guide (including how to make a few gear items at home, such as a poke pole made of bamboo and a wire hanger, a ghost shrimp pump from PVC pipe and a spongy rubber ball, and an A-frame net made from dowels, twine, and netting); safety advice; and straight-up talk on what he’s learned. His direct, conversational writing style makes readers feel like they’re learning the ropes from an old friend who tells it exactly as he sees it.

Lombard spoke to Civil Eats about his perspective on the wide world of sea creatures and fishing in Northern California, and shared a few of his foraging adventures as well.


How did you become so passionate about fishing and marine life?

I’ve always fished—mostly recreationally. My grandfather, who’s from California, gave me the bug. He used to tell me stories of the fishing in the Monterey Bay area at the turn of century. I grew up in New York City and lived across the street from the Hudson River in the West Village. Every day after school I’d go fishing. Every once in a while I’d also go and fish in Santa Cruz or Monterey on a party boat or on a pier.

I’ve had numerous careers—as an actor in New York, a teacher in California. I had a band that traveled around the country. But throughout all of this, fishing was the one constant in my life. I also worked for the Department of Fish and Game for a while. I ran around and surveyed fishermen from shore or on party boats. My wife always laughed because on my day off, I’d go talk to fishermen.

But I’m much more interested in the things that aren’t really that important to most others, like the bait fish and things that are sort of hidden in plain sight.

You’ve communicated about fish and seafood in many unconventional ways. Tell me more about these projects.

I started the Monkey Face News zine to write about my fishing adventures. For two editions—about 50 issues in total—I made the spines from the skin of eels that I had hunted. It took me hundreds of hours to do this.

The blog had a small but loyal following of people who were fish nerds like me and loved to talk about fishing. I would talk about baseball and classic 1950s-era film noir and put it all together with weird music. I did this for about four to five years, pretty regularly.

I also started doing these walking tours about fishing and foraging. I’d tell stories, and the tours really took off. And I had a very brief stint doing a cable show on Pivot Media, a network that no longer exists.

You open your book with a calling for an “intertidal citizenry.” What do you mean by that?

This is about ethics. Sustainability, for the most part, is built into the rules and regulations, but regs are meaningless if the people fishing or hunting lack an understanding of their own impact and think it’s OK to do whatever they want out there. This is why I hammer this particular nail so hard in my book. We have an effect on the environment, and we want to manage that as much as possible.

I take a lot of time to explain the difference between a classic citizen, who cares about and is invested in the coastal ecosystem, and the rank consumer, who takes it all for granted, is ignorant of his own impact, and is dismissive of the intensely finite nature of our resources. [This] is [the] kind of person that [screws it up] for everyone. For example, you don’t take a crowbar to the mussel beds. Really, this is a deeper problem in our culture as a whole, as we seem to be mass-producing the latter group at a dizzying pace.

I am definitely not objective in my opinion here, but I think of the Northern California angler as a species of fisherman as passionate and devoted to the resources as any group of piscivores [fish eaters] on the planet. Just peruse pierfishing.com, NorCal Kayak Angers, or Coastside fishing sites for evidence of this. And I’m just talking about salt water—there’s a massive community of people who fish rivers, lakes, ponds, etc., who are every bit as passionate as the coastal folks.

I guess the major challenge in California’s recreational fisheries is enforcement. But, despite how much everyone whines about them, when you consider how many people and how much sheer space California’s Department of Fish and Wildlife has to cover, they do a very good job protecting the resources.

What are some of the most memorable adventures you’ve had while sea foraging?

There’s a long section in my abalone chapter about how I was chased by a great white shark while abalone diving. That was not fun, but it was a good story. Beyond that, I also had a moment where I was smelt fishing on the outer coast up north, and I threw a net and the net landed on a sea lion that almost dragged me to my death.

Tell me about your favorite sea creature.

One of my favorite fish is the plainfin midshipman—it’s used for bait. And it’s just fascinating that it can live in an extreme range of depths. It comes to San Francisco Bay to spawn in two inches of water—from [swimming in] depths of thousands of feet. Spots on their stomach will light up like a Christmas tree if they eat a certain type of plankton.

The plainfin midshipman is part of a group of several animal species that have a sneaky way of getting their beta males’ genes in the gene pool so the species can stay genetically viable. Usually the beta males can’t get anywhere near the pregnant females, but after the females lay their eggs at the foot of a rock near the shoreline, they go off hunting, and the alpha male watches over the eggs. The beta male impersonates a female and enters the area, so alpha male accepts him. Then the beta squirts his sperm all over the eggs.

On top of that, it sings so loud that a few years ago [people] in Sausalito were aghast at the sounds they were hearing because they thought it was an electrical problem.

Here’s a fish with so many incredible things about it. But fishermen use them as bait because they wiggle a lot and stay alive on the hook for a longer time. They stick a hook through their nose and drag them around the Bay hoping that a lingcod or other fish will eat it. That struck me as uniquely evil.

I always read the midshipman chapter at my book readings. When I read it, people laugh and cry.

What’s your favorite thing to eat from the sea?

My favorite thing to eat changes. I wrote a whole chapter about surfperch and how it’s not good to eat. But lately I’ve been getting into making surfperch ceviche. You chop up some garlic, add in lime juice, and mix it together.

Surf smelt is my favorite small fish to eat. I’m also a big proponent of steamed whole rockfish in the classic Asian style, where it’s cooked with green onions and ginger. There’s really no way to do a fish better than that.

It’s herring season now, so we’re getting ready for pickled herring. If you knew the life story of a herring you might think twice about killing it. But in truth, the life stories of all fish are remarkable. You decide what gets a pass (and for me, the midshipman gets a pass).

What advice do you have for wannabe sea foragers?

Get a pair of waders and climb out on the rocks on low tide. Observe and appreciate. There’s nothing like real curiosity as a motivator. You can find out the names of [what you see]. A lot of places can assist you, like the California Academy of Sciences, Forage SF, and other organizations. Go out on a kayak. Don’t even get a fishing pole. There’s so much to behold out there.