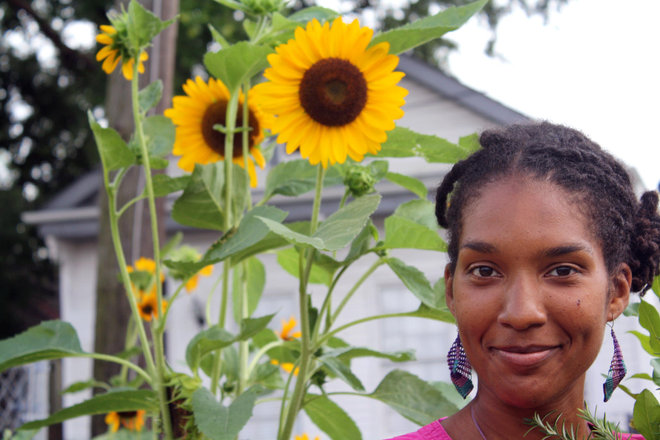 Two years after Hurricane Katrina devastated New Orleans, Jenga Mwendo saw potential for rebirth in an overgrown lot in the Lower Ninth Ward, where she’d grown up. Calling on residents’ not-too-distant tradition of backyard gardening and historic sense of self-reliance, Mwendo rallied her neighbors to clear the lot and plant some seeds.

Soon after, she founded the Backyard Gardeners Network, a nonprofit that runs two community gardens—the Ernst Garden and the Guerrilla Garden—and encouraged residents to get involved. In addition to overseeing the maintenance and use of both spaces, the nonprofit hosts volunteer groups, organizes workshops and events, gives away seeds, and runs a donation- and grant-funded resource center that includes a tool-lending shed for people who want to garden but don’t have the supplies.

Mwendo, 38, was born and raised in New Orleans, but left to pursue a career as a computer animator in New York. In 2005, just months before Hurricane Katrina would ravage the city, breaking the levees and submerging many houses under up to 12 feet of water, Mwendo purchased a home in the Holy Cross area of the Lower Ninth Ward as an investment property.

While Mwendo’s house was not destroyed in the storm like many of her neighbors’, it did suffer water damage from the flooding. And so, in 2007, she moved with her daughter back to her hometown and set to work repairing the house. Pretty soon, she turned her attention to the community as well.

“I decided to stay put and help to revitalize the community and saw the opportunity to do it through gardening and food,” she says.

With more than 1,200 restaurants citywide—even more than were in operation before the storm—some parts of New Orleans are flourishing. But while the number of supermarkets in the city has returned to pre-hurricane levels (around 32), many residents still lack access to fresh and healthy foods. In cities nationwide, the average number of residents per grocery store is 8,800. In New Orleans, however, a recent report showed that number between 16,000 and 18,000, up from 12,000 before the storm.

The Food as Medicine workshop series, another Lower 9 program, has proven especially popular, Mwendo says. According to the Centers for Disease Control and Prevention, the obesity rates in New Orleans are five percentage points higher than the national average. Taught by health professionals, nutritionists, and cooks, the series of 10 workshops teach participants how to eat for healing.

“Healthy food is really at the root of health and wellness,” Mwendo says. “This program has garnered more excitement and involvement than any other program we have hosted at the garden.”

In addition to community engagement, Mwendo is especially proud of the jobs Backyard Gardeners Network has created. “We have been able to hire three garden managers, one videographer, and some support personnel from within the neighborhood,” she says. “At a time when it is difficult for teens to get summer employment, the Backyard Gardeners Network has been able to hire 15 teens over three seasons, through their youth internship program.”

While Mwendo is still playing an active role in the day-to-day management of the gardens, she has passed on some leadership responsibilities to people like Courtney Clark, the network’s programming coordinator, who Slow Food USA selected as a delegate to this fall’s Terra Madre conference. Mwendo has dedicated her extra time pursuing other, complementary community-building interests.

This May, for example, she earned a master’s in sustainable real estate development from Tulane University, a degree she hopes to use to preserve the history and values of New Orleans. All too often, she says, small-scale developers buy and sell properties in the city, driving up real estate prices, and pushing out longtime residents. Sustainable development, she says, is “a way to help to create a more economically vibrant community. I don’t want our people to be pushed out of the Lower Ninth through development and gentrification.” She hopes to continue educating herself about development, and within five years, to carry out a large project that incorporates food access, she says.

One of the biggest challenges Mwendo has faced in her urban agriculture work thus far is securing the funding the organization needs to carry out its projects. “The Backyard Gardeners Network doesn’t bring in any income, and we are constantly relying on outside funding sources,” Mwendo says. “We are providing great programming, and we are doing it for free.” Ultimately, she would like to add a development director to the team.

While Backyard Gardeners Network focuses largely on growing food, the program is really more about building and nurturing relationships, Mwendo says. “We have a strong team,” she says, and that is what our work is about—coming together as a community to support the positive elements of our culture and things that make us stronger.”