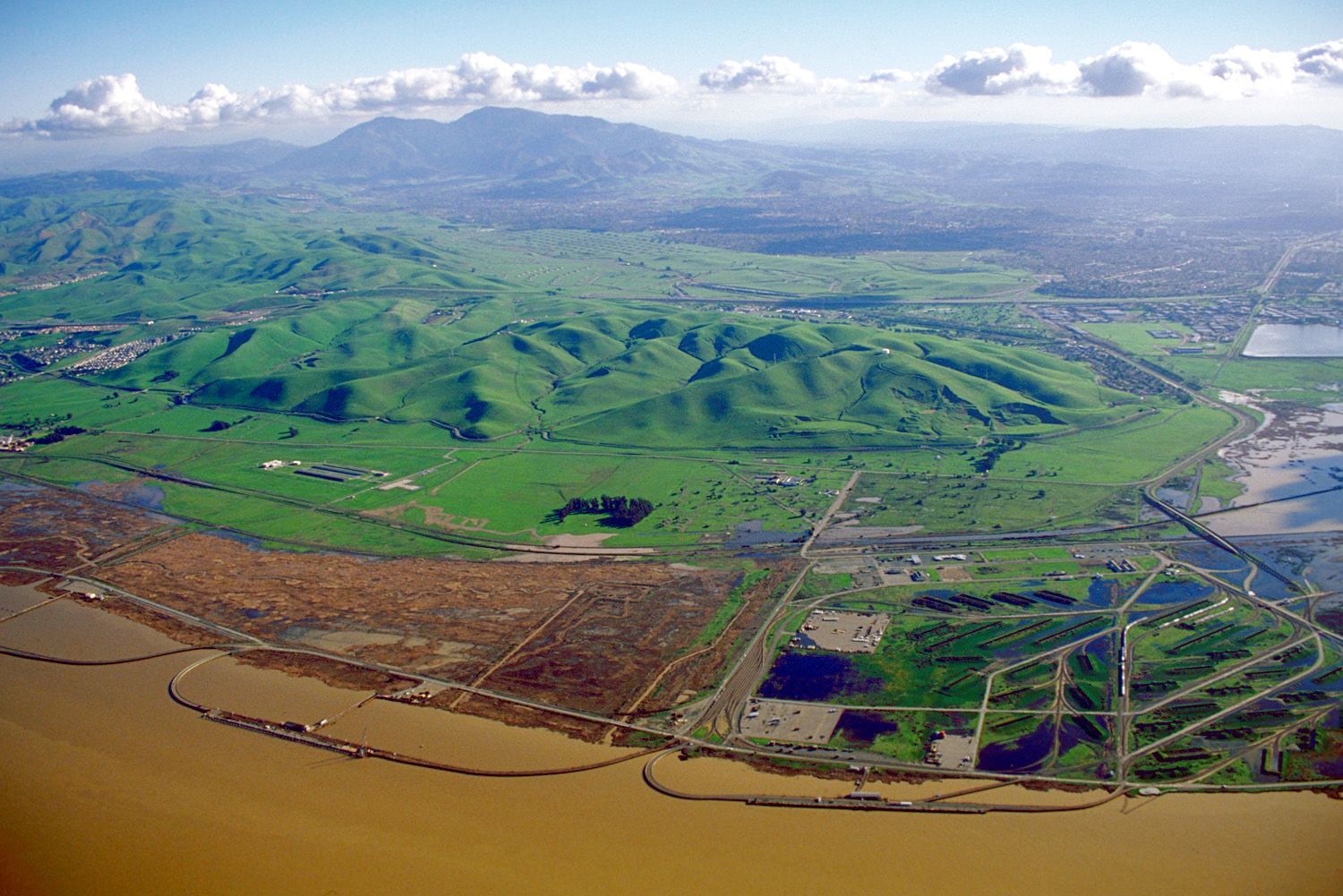 All signs point to the five-year drought being over for parts of California, at least for the time being. A mid-winter week of punishing rains and flooding has left Northern California, in particular, with full reservoirs and a bright outlook on water supplies in 2017. According to the U.S. Drought Monitor, 60 percent of the state is back to normal. The positive prognosis can’t be made for Southern California and the San Joaquin basin in the Central Valley, where two-thirds of the land is used for water-thirsty agriculture.

So what does the end of the drought in Northern California mean for the ongoing California water wars? Could the answer be found in the $11 billion Water Resources Development Act of 2016? Signed into law by former President Obama in December, the act—a product of two years of bipartisan congressional deliberation and revision—allots $558 million for water projects in California.

On the list: desalinization plants, flood control, watershed restoration, water recycling, water storage, and dam rehabilitation. The provisions for California were folded into a massive federal bill that includes $170 million in funding to address the lead-filled water crisis in Flint, Michigan, and money for ecological restoration and water infrastructure improvements across the country.

While groups like the Association of Water Agencies applauded the new legislation, others feared that the some of the provisions would pose a grave threat to already imperiled ecosystems. In particular, a “midnight rider” tacked onto the legislation right before it headed for a Senate vote on December 8. Authored by House Majority leader Kevin McCarthy (R-Bakersfield) with the endorsement of California state senator Diane Feinstein (a long-time friend of corporate agriculture interests), the rider approves maximum pumping out the Bay Delta, the largest estuary on the Pacific coast.

The last minute maneuver has pitted Northern California sport and commercial fisherman, some Delta farmers, and environmental activists, against the multi-million ag industry to the south. Just a few days after giving a last farewell speech, retiring California state senator Barbara Boxer, who worked on the original legislation with Feinstein, returned to the floor to filibuster against the rider. She called the revised version a “devastating maneuver” and a “poison pill” designed to undermine the Endangered Species Act.

“Right now there is a real concern that the midnight rider will allow the Delta water projects to operate more aggressively and pump more water,” says Doug Obegi, a senior attorney with the Natural Resources Defense Council (NRDC). “This will further jeopardize the continued existence of endangered species, along with the jobs that are dependent on their health.”

In arguing for the rider, Feinstein said, “This water is for the tens of thousands of small farms that have gone bankrupt, like a melon farmer who sat in my office with tears in his eyes and told me how he lost a farm that he had struggled to pay for and that had been part of his family for generations.” But the Sacramento Bee later pointed out that Feinstein had her facts wrong. In fact, farm employment had actually grown during the worst of the drought.

Meanwhile environmentalists believe that the rider could ring the death knell for the Delta and San Francisco Bay fish populations. A new report by the Bay Institute documents cataclysmic declines in sharks, salmon, sturgeon, and smelt in the San Francisco Bay since large-scale diversion of water from the Delta began in 1975. This raises the specter of a potential loss of thousands of fishing jobs from Northern California up to Oregon and the continued decimation of an $1.4 billion salmon industry.

After being diverted by powerful pumps at the southern end of the Delta, near the mouth of the San Joaquin River, much of the water in the Delta is currently sent south, to fulfill contracts with water users in the Central Valley and the Metropolitan Water District, which supplies water to urban areas in Southern California. And yet, the when water is scarce, the tension is often framed chiefly as a battle between environmentalists and fishermen versus the agriculture industry.

In 2007, citing concerns about the sharp declines in species like smelt and salmon in the Delta, a court ruling declared that a Biological Opinion, established in 2007 by the U.S. Fish and Wildlife Service, would rule over the needs of water users. The Biological Opinion mandated that a certain amount of water must stay in the Delta especially during the prime season between January and June, when juvenile salmon—poor swimmers dependent on the Delta tides to push them out to sea where they grow into adults—are coming down the Sacramento River and heading out through the Golden Gate into the ocean. This means the pumps stay off, no matter what.

The corporate agricultural interests raised an uproar, and accused the powers-that-be of killing their businesses. They took the fight to overturn the Endangered Species Act to federal court in 2011, but ultimately lost.

“What we’re seeing now is, if you can’t win, you change the rules of the game,” says John McManus, longtime fisherman and the executive director of the Golden Gate Salmon Association, about the midnight rider. “Because they couldn’t get protections for fish thrown out by a judge, they’ve gone to Plan B.”

Obegi says that the Endangered Species Act (ESA), widely blamed for the inability to meet Central Valley irrigation needs, is a “red herring” in the fight. “Indeed, during the drought years of 2014 and 2015, there was very little water provided for endangered species, and both Salmon and Delta Smelt got hammered,” he adds, pointing to data from a Bay Institute report.

And the problem doesn’t really lie in urban water demands, which haven’t increased as much as you might think thanks to increased water usage efficiency. Instead, the bigger problem is that California has issued water rights far beyond the amount of surface water actually available in any given year. Or, put another way, there just isn’t enough water to keep doing things the way they’ve always been done. Combine this with the messy, archaic water rights system based on much lower population numbers, and you have a recipe for serious conflicts.

The “three-inch fish” became the central villain in a May 2016 campaign speech when Donald Trump blamed the smelt for the dry conditions on Central Valley farms. Soon after, the president-elect told the audience that “there is no drought,” and that state water officials were taking the water from the Bay Delta and “shoving it out to sea.”

“Unfortunately, at times, this form of legislative action can lead to endless battles between different sectors, as though we are talking about two different sets of facts,” says Newsha Ajami, director of urban water policy at Stanford University. “That’s what really concerns me when it comes to the Endangered Species Act, environmental and ecosystem health and its relevance to both urban and agricultural water use, and the water needs of both Northern and Southern California.”

“There’s no one silver bullet,” says Maltby, who is also a former county supervisor and Family Water Alliance board member. The 72-year-old rancher has seen farms, and even entire towns in the Central Valley run dry. He says the heart of the problem lies in how water is currently managed. He’d like to see water storage increased, and views desalination plants, like the one in the north San Diego city of Carlsbad, as a key solution to Southern California’s water woes. He also supports increased pumping out of the Bay Delta.

“More pumping is essential to producing more food,” says Maltby, who feels a kinship with the Central Valley farmers to the south of him. “You know, there are hundreds of thousands of acres that sat fallow because they couldn’t get the water to it that they had water rights for.”

Nadine Bailey of the Family Water Alliance, which is based in a small town in the Sacramento Valley, and advocates for the private water and property rights of local farmers, is skeptical of the ESA, and calls salmon the “flavor-of-the-month,” pointing to the issues surrounding the endangered spotted owl.

As for “The Water Resources Development Act,” she says, “If this legislation doesn’t solve the problems and get people thinking about innovative ways to capture, store, and ship the water that we already have, then we are missing the mark.” She points to things like reuse and desalination on farmland, as well as groundwater recharge and more groundwater storage as potential solutions.

Groundwater recharge is a buzzword that applies to the way some farmers have been flooding their land this winter to help recharge groundwater. This is a way to store and capture abundant winter storm water underground, even in dry San Joaquin Valley, when the water is available.

These solutions may bolster the Delta’s supply in the long run, but it will likely be a few years before we’ll see the direct impacts from the midnight rider.

“Because we’re getting a lot of water right now, I think there’s a fair chance we won’t actually see harm from the legislation right now,” says McManus of the Golden Gate Salmon Association. But in dry years, the provisions in the rider might allow water users to override the ESA, fire up the pumps, and send the water south, despite the threat to the Delta ecosystem. “That’s when we really get into trouble,” says McManus.

Indeed, given the challenges of population growth and climate change, most agree that the state will need solutions that work for everyone from the fish to the farmers—especially as Northern California literally swims in water and Southern California continues to run dry. And the other elements of the Water Resources Development Act—such as better watershed restoration, water recycling, and water storage, for instance—could go some of the way in that direction.

But, as Stanford’s Ajami sees it, that will require an end to the fighting. “The reality is that this is a resource we all need, and requires that we must be thoughtful in the way we consume it,” she says.