It's time to apply the energy of the food movement to preserving our democracy. 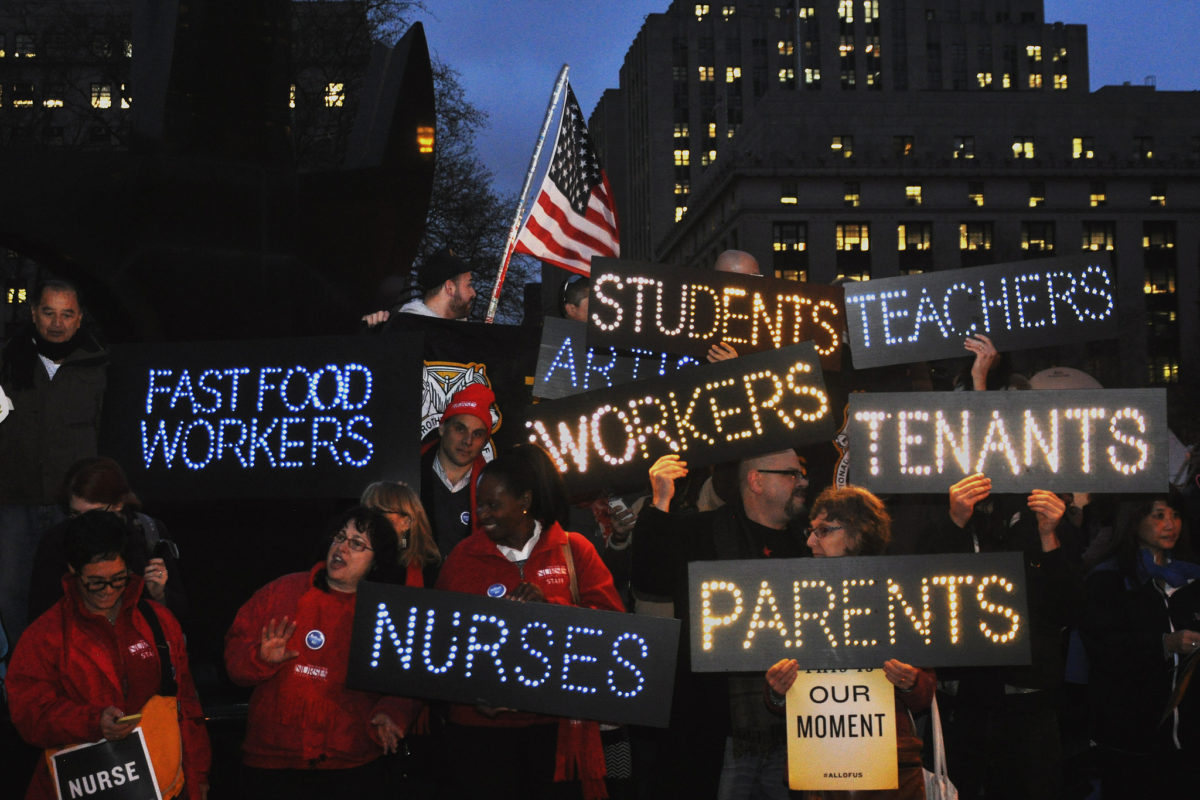 If the recent election had an upside, it’s this: It demonstrated that the good food movement is real. Four jurisdictions—Boulder, Oakland, San Francisco, and Albany (California)—approved taxes on soda, which will benefit both public health and public finances. (Two days later, lawmakers in Cook County, Illinois, also approved a soda tax, becoming the largest jurisdiction to do so.) In Oklahoma, an initiative to shield animal factory farms from regulation was defeated. Massachusetts voters passed a measure outlawing the sale of products from animals raised inhumanely. And four states voted to raise their minimum wage above the anemic $7.25/hour federal standard.

Meanwhile, the national reality has turned Orwellian: In a matter of days we will have an attorney general who is hostile to civil rights, an EPA chief who doesn’t believe in climate change or environmental protection, a Health and Human Services Secretary hostile to public support for health care, an anti-worker Labor Secretary, and an anti-democracy Congress which will rubber stamp an increasingly anti-individual rights Supreme Court. Not to mention a president who evinces little respect for democratic institutions and is already regarded the world over as, shall we say, sui generis.

As of today, the president-elect has yet to nominate an agriculture secretary, but the food movement is rightly aghast at the agriculture transition team, which promised to “defend American agriculture against its critics, particularly those who have never grown or produced anything beyond a backyard tomato plant.” This nonsense is premised on the assumption that “American agriculture” is limited to the large industrial variety and that advocating that public investment serve the public interest is a bad thing. Yet the majority of farmers are clearly not being served by the current system, and the only sector of the food industry that’s actually growing today is the one that produces good food.

How can the food movement best navigate this treacherous new environment? Two years ago, we outlined the need for a national food policy, a critical yardstick in determining whether legislation helps or harms farmers, eaters, the land, animals, and more. This remains an important long-term goal, but right now the most pressing work is to join forces with other progressive groups in a more immediate cause: protecting the disadvantaged and defending democracy. So it is the recent minimum wage victories, spurred by the Fight for $15—an alliance of workers, labor unionists (specifically, the Service Employees International Union), immigrants’ and women’s rights advocates, and the Food Chain Workers Alliance—that should point the way forward.

Some say that food is a non-partisan issue. Yet, like all movements that aim to secure the rights and improve the lives of “ordinary” (that is, non-wealthy) people, it’s a fight for progressive values. Health care, education, a strong safety net, concern over climate change and the environment, income inequality and equal rights for everyone should be non-partisan issues, since making progress on each improves the lot of the community as a whole. That not everyone shares these aspirations is what makes the struggle for good food for all so high-stakes.

Activists fighting these battles seek to expand on the egalitarian vision animating our Republic, despite its flaws and its contradictions. (After all, this country was founded by white male landholders and slave-owners, almost exclusively for their own benefit, despite some flowery language suggesting otherwise.) But the most important result of the national election is the blow that will be dealt to progressive issues by the new president and his plutocrat allies, as they demonstrate that their main interest is to retain power at all costs. The scale and intensity of the extraction and exploitation economy is about to be redoubled.

As people who care not only about food but related progressive issues, our task should be to join together to actively resist efforts to roll back the public protections we have gained, and in favor of the social justice issues we will continue to fight for. This means that important but parochial food issues, such as the labeling of GMOs or the formulation of national nutritional standards, are bound to be overshadowed as the larger fight for social justice becomes more urgent.

Of course we want real food to be available to everyone. That means challenging misdirected government subsidies, monoculture farming, and all that stems from this. The Farm Bill will be up for renewal during the next administration. We must fight to guarantee that it serves the interests of all farmers—not just big ones—as well as workers and eaters, especially the working poor and children who receive vital nutrition assistance from programs like the supplemental nutrition assistance program (SNAP), the Women, Infant, and Children program (WIC), and school lunch. (The latter two programs fall under the Child Nutrition Act, which is up for re-authorization and has been targeted for deep cuts by the Republican leadership.)

But fighting for real food is part of the larger fight against inequality and racism, since poor diets disproportionately affect economically marginalized and politically disenfranchised populations. Similarly, we want agriculture to be regenerative, but this requires joining in the climate struggle, which in turns means fighting the corn ethanol mandate, the official policy of using of some of our richest farmland to produce raw materials for fuel and for foodlike substances that undermine public health, especially among the poor.

Conversely, the climate movement should recognize that Big Food is a prime generator of heat-trapping gases, and that the movement toward growing and eating more plant-based and sustainably farmed foods could significantly reduce the production of those gases, while regenerative agriculture, by transforming soil into carbon sinks, has the potential to remove them from the atmosphere.

Natural allies are everywhere. The most important work we can do now is to resist the authoritarian assault on democracy, prevent global catastrophe, and nurture civil society (including the burgeoning alternative food economy), even as we redouble our efforts to make the federal government accountable to everyone, not just the rich and influential.

Food aside, this means fighting for renewable energy, security for women’s health clinics, eliminating violence against African Americans, higher wages and other policies that protect the poor, and treating immigrants as our equals. (To come full circle, the labor provided by immigrants is indispensable in bringing food to our table; without their labor, we’d all starve, and quickly.) The food movement should be involved in all of these struggles, especially as this administration begins to deliver on its promises to attack the very same issues and principles.

You can’t fix agriculture without addressing immigration and labor or without rethinking energy policies; you can’t improve diets without reducing income inequality, which in turn requires unqualified equal rights for women and minorities; you can’t encourage people to cook more at home without questioning gender roles or the double or triple shifts that poor parents often must accept to make ends meet; you can’t fully change the role of women without tackling the future of work, childcare, and education; you can’t address climate change without challenging the power of corporations and their control over the state—and, not so incidentally, without challenging Big Food. The fight for healthy diets is part and parcel of these other struggles, and it will be won or lost alongside them.

It’s all connected; the common threads are justice, fairness, and respect. “Sustainable” is a word that we must now apply to democracy itself: a nation built on perpetuating injustice and the exploitation of people and nature doesn’t qualify. And a “sustainable food system” cannot exist inside an unsustainable political and economic system.

We stand with the majority of Americans who are on the side of justice, fairness, and the scientific pursuit of truth, and who believe it’s up to us to build the country we want to live in. The catastrophe of the presidential election results cannot be negated by isolated blips of progress, but these do exist. More than two million low-wage workers stand to benefit from the poverty-fighting ballot initiatives passed in Arizona, Colorado, Maine, and Washington. The food chain pays the lowest hourly median wage to frontline workers — many of whom are women and people of color — compared to workers in all other industries.

The fact that there aren’t more examples demonstrates, perhaps, that food, labor, climate advocates, the pro-diversity and anti-inequality forces and so on, are weaker for our lack of unity—not a new problem for progressives. On local, state, and even occasionally federal levels, good things happen all the time; they would happen much more frequently if the ranks of demonstrators for reproductive rights, for example, were swelled by Food Chain Alliance activists, and if members of the Young Farmers Coalition turned out to support Black Lives Matter. And vice versa. That’s why it’s important that all these groups link arms and march together this week, whether in Washington or locally.

We need victories anywhere we can get ‘em, and it’s important to recognize that even small ones can have a long reach. Consider this one popular food movement proposal: Doubling the value of food stamps at farmers’ markets, as many municipalities have done. It helps local economies, farmers, and poor people, many of whom are minorities and/or women and/or underpaid workers. We can count a half-dozen alliances that have already begun to form around that one “food issue.”

Similarly, achieving security for immigrants raises wages for everyone; increases purchasing power and economic activity; insures a safer food supply; builds real community; reduces wasteful law enforcement efforts; advances the struggle for better education and health care; and even builds support for public transportation, an issue important to climate advocates. Examples like these are many.

In recent years the food movement has drawn a bright line between the interests of a rapidly declining sector of agribusiness and the broader interests of the nation, including the majority of its farmers, workers, and eaters. Similarly, climate advocates are showing the way to fight the entrenched interests of a fossil fuel industry in decline. And all of us, emphatically in common cause with all those who have been historically excluded and often persecuted—women, people of color, immigrants, the poor, the LGBTQ community—share an interest in resisting the plutocracy’s ever-increasing power.

It is not so much confrontational as pragmatic to say that it really is us against that plutocracy and its apologists. Mature social movements (including those on the right) recognize that it’s always a struggle to get what you want. As progressives, it is not enough to say that the current arrangements are doomed and that a better world is possible. We must work for it. To paraphrase an old proverb, the best time to unite was before the election; the second best time is now.